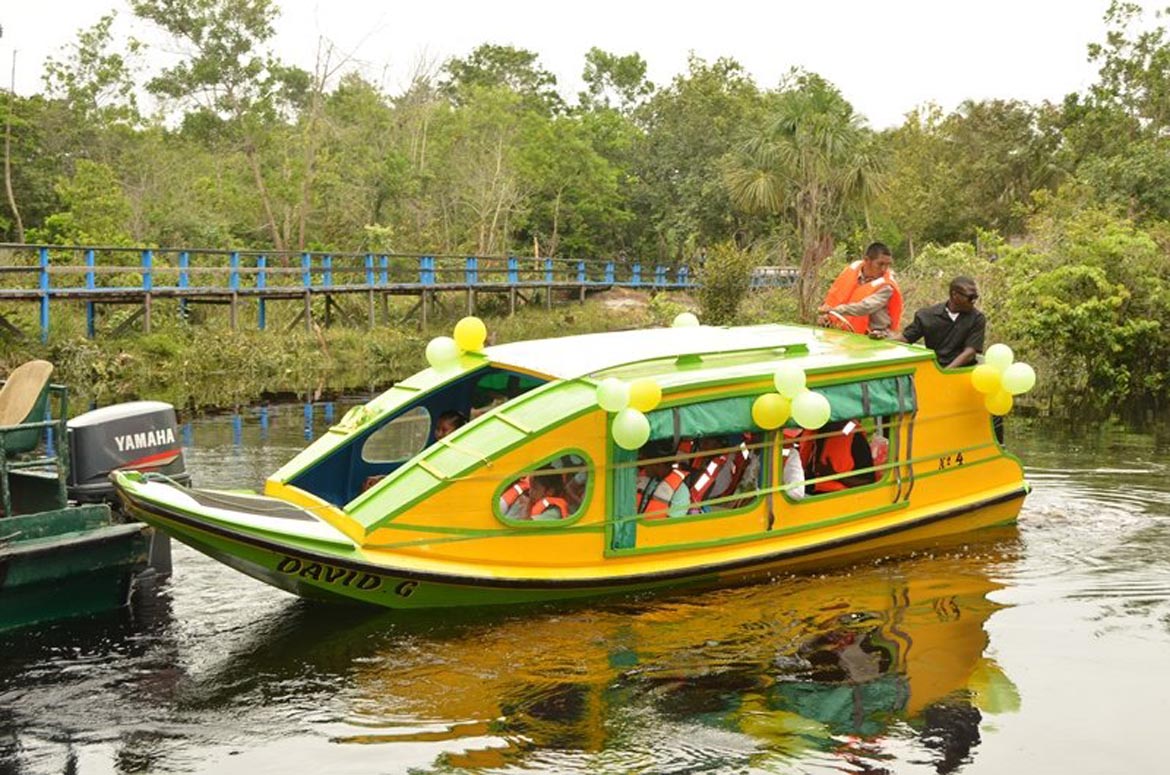 Georgetown, Guyana – (June 27, 2016) The village of Moraikobai, situated up the Mahaicony River, Mahaica-Berbice (Region Five), yesterday, became the latest beneficiary under President David Granger’s Five B’s or ‘Boats, Buses, Bicycles plus Breakfast and Books’ Programme, which is aimed at ensuring that every child has access to and stays in school.

President Granger commissioned a 42-seater boat, which was donated by the Guyana Goldfields Incorporated/Aurora Gold Project. The company handed had handed over the boat to Minister of Social Cohesion, Ms. Amna Ally, earlier this year.

In addition to handing over the boat, the President has committed to ensuring that a number of bicycles are handed over to the community before the beginning of the new school term to cater for travel, during the dry season.

Before officially commissioning the boat, President Granger in his remarks, said that in November 2015, three women – Deputy Toshao, Ms. Mary Joseph, Ms. Shenelle Adrian and Ms. Lynette Adrian- from the village visited him at the Ministry of the Presidency, where they shared the plight of the students, who travel as much as 100 miles to get to the Central Mahaicony Secondary School. The children are forced to pay as much as $3000 per day to travel out of the village to attend school. Consequently, school dropouts and absenteeism had become prevalent.

The boat, which was donated by Guyana Goldfields Incorporated/Aurora Gold Project and commissioned by President David Granger in Moraikobai.

“I was encouraged to come here by three wise women. They came to me last year November and I did promise to come and today I am fulfilling that promise. What they asked me for, was a boat and I have brought the boat. These are the women who came out of this river and took the initiative to come and see me. I didn’t refuse to see them. I didn’t tell a clerk to see them. They came into my office and I gave them my word. I am honouring that promise,” the President said even as he gave each of them a token of appreciation.

Given his intense focus on education, the President noted that he was moved to initiate action so that the burden of travelling can be significantly reduced for both students and parents alike of the village.

“I couldn’t come before because there was a drought and the river was too low but here I am today… We must keep our children in school and there must be no excuse; no excuse of lack of transportation. Let us keep this boat working and I promise you, we will do everything possible to ensure that it is kept repaired and functional at all times because if our children cannot go to school, they cannot take part in making Guyana that better place and giving themselves that good life that has been promised. I want to urge the Toshao to make sure every child goes to school,” President Granger said. 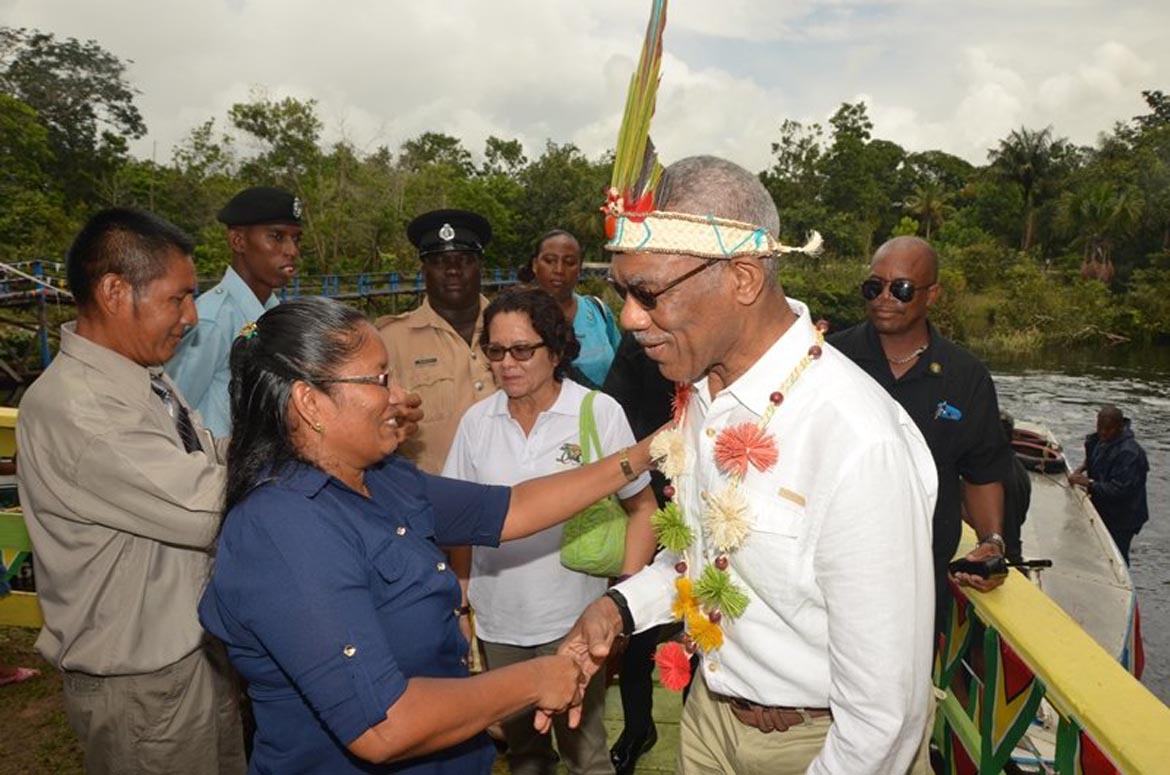 President David Granger is welcomed by Headmistress of the St. Francis Primary School, Moraikobai, Ms. Shalome Calistro, upon his arrival to the village .

Minister of Social Cohesion, Ms. Amna Ally, who has been playing an instrumental role in the coordination of the B’s programme, in her remarks, highlighted that though the President had made the commitment since 2015, he has fulfilled the promise so that younger generation can benefit to take Guyana forward.

“I recall being told by the President of your approach to him for a boat to be used by our children and members of the community for essential purposes and here we are; the President is delivering on his promise as usual. Requests like these cannot be ignored or forgotten because this administration recognises that education and essential services happen to be the best investment that we can make in our people. We as a government have initiated legitimate action to improve access to education through President David Granger’s B’s project,” Minister Ally told the residents of Moraikobai.

She noted that the programme is a representation of how responsive the government is to the needs of the people, especially in the areas of education and social development. 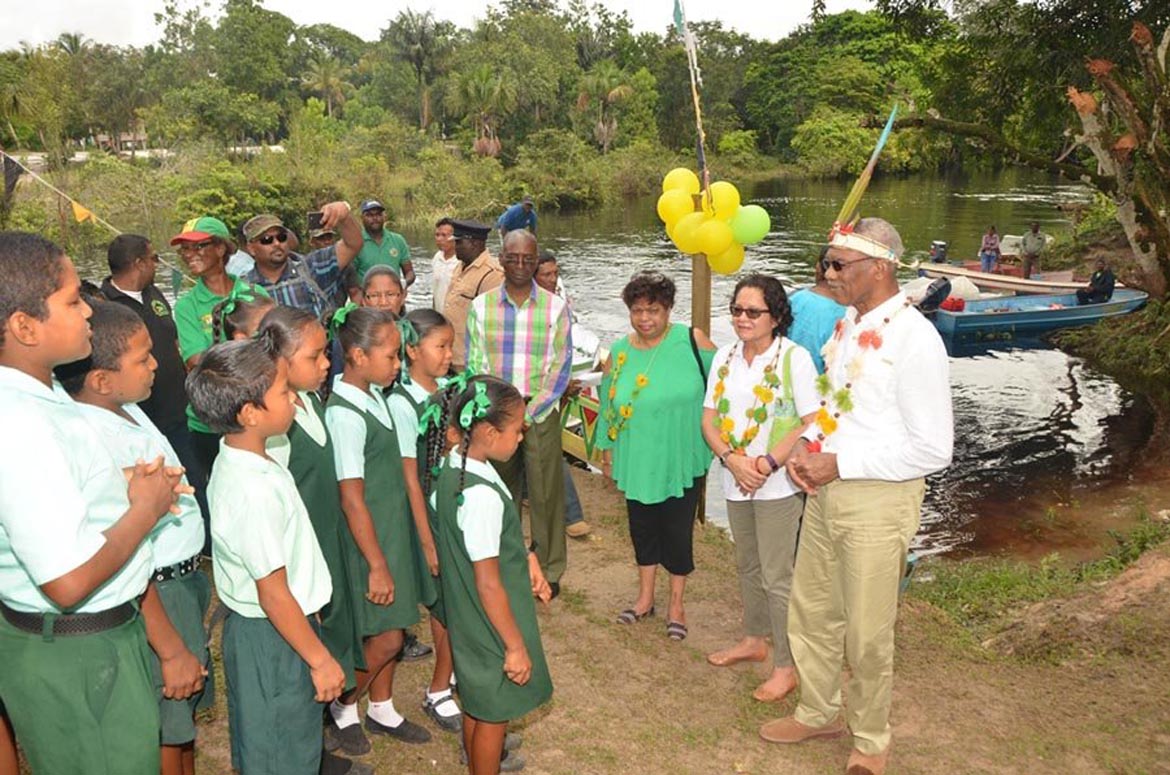 President David Granger is welcomed by Headmistress of the St. Francis Primary School, Moraikobai, Ms. Shalome Calistro, upon his arrival to the village .

“We have a proactive government whom by ever means necessary, will seek to address social ills and inequality issues, specifically issues that impedes children and young people from achieving their full potential in life. We will make all the necessary investments to ensure that every child has equal access to education, regardless of their location, whether it is riverine, hinterland or coastal communities,” the Minister noted.

Meanwhile, Toshao of the Moraikobai, Mr. Collin Adrian, expressed his thanks, noting that it is heartening to see the President keep his promise which he had made to the women who had visited his office in November last year. He also extended thanks to the Government for its quick response to addressing the village’s flooding situation about two weeks ago.

“Our expectation surely was not in vain. This is a visit we were expecting from since December and today it has borne some fruits. A few weeks ago our community was affected by the flood, however I must thank the Government for its quick response. Thank you, Mr. President for responding to our call,” he said.

Though no representative from the Guyana Goldfields Incorporated/Aurora Gold Project was present at the commissioning ceremony, Logistics Manager of the company’s Buck Hall operations, Kenrick Glasgow, during the handing over of the boat to Minister Ally, earlier this year, had said that the commitment to gift the President a boat for his ‘Buses, Boats and Bicycles’ or ‘three Bs’ programme, was made the same day that the company poured its first gold bar.

“This is a present from the people of Guyana Gold Fields for the children of Moraikobai in the Mahaicony River. It is indeed a pleasure and an honour to give this gift for the children so that they can go to school,” Glasgow said.

Ms. Mary Joseph, who was one of the women who had visited the President in November, expressed her gratitude, noting that the President’s actions to honour his promise, has not gone unnoticed.

“I feel so great that the President has really stood to his word and I know that he didn’t fool us. He promised us and he has dedicated himself and came to us and delivered and for that we are most grateful,” she said. 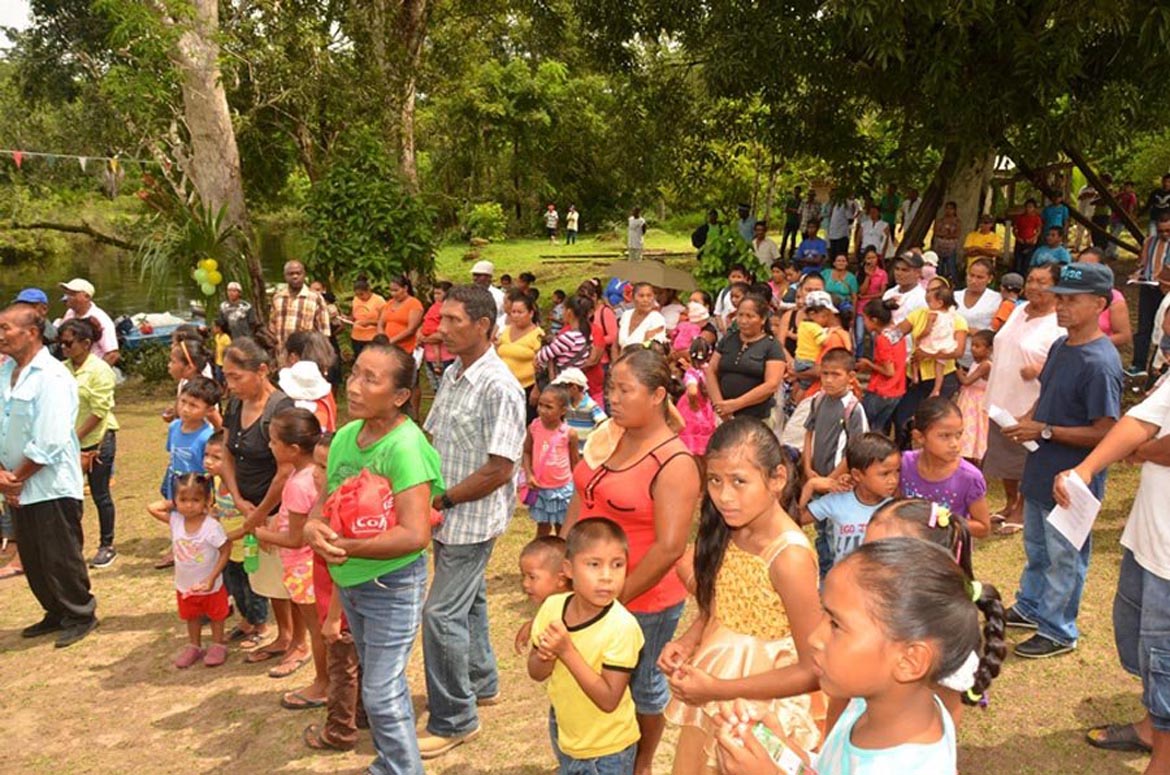 Some of the residents, who turned up at the Moraikobai Landing to witness the commissioning of the boat.

Ms. Shenelle Adrian, another resident said “we feel happy because it is good for our children. When they have to go to school, they have to travel on the pontoons in the rain and now all of them will get to school,” Ms. Adrian said.

The Boat is expected to benefit at least 50 students and Headmistress of the St. Francis Primary School, Ms. Shalome Calistro, hopes that it will significantly boost the morale of the students and parents alike, encouraging regular and punctual attendance at school.

To date, eight boats and nine buses have been commissioned by the President while hundreds of bicycles have been distributed to communities across the ten administrative regions of the country.