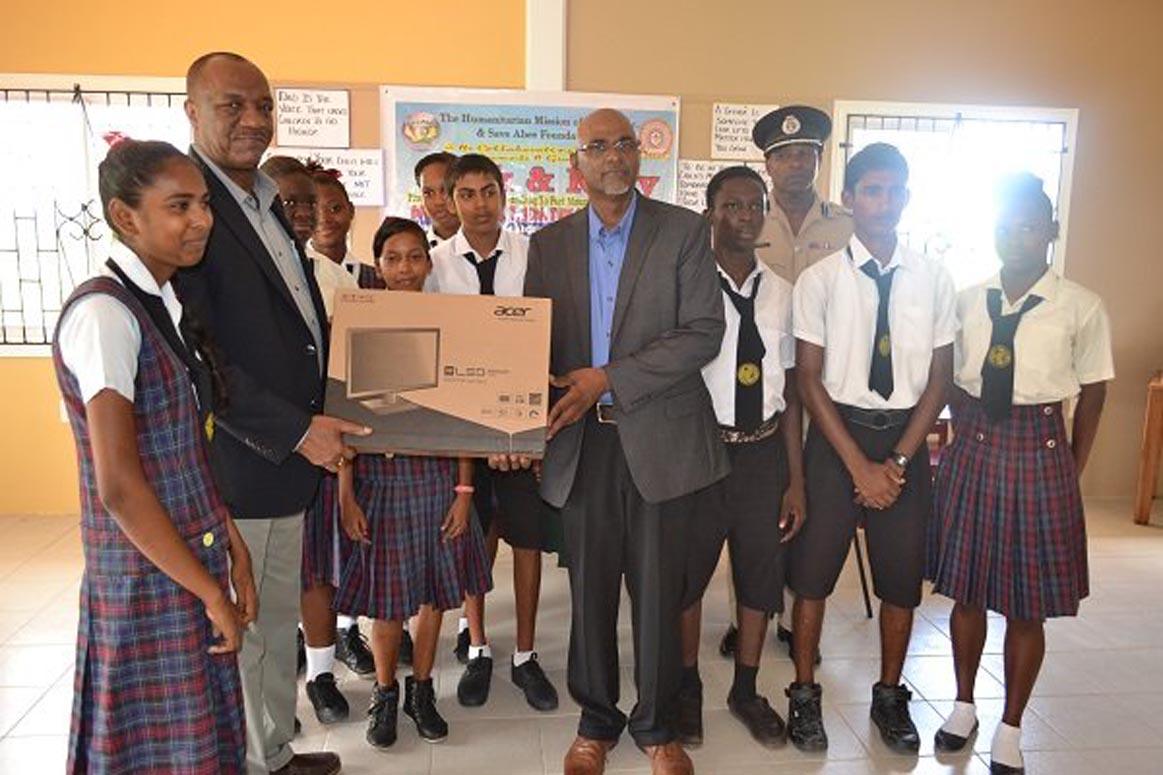 Georgetown, Guyana – (June 24, 2016) Minister of State, Mr. Joseph Harmon, today, made donations to the Canje Secondary School and the New Jersey Humanitarian Project, in addition to meeting with a visiting delegation and the Vice Chancellor of the University of Guyana, during a packed agenda on a visit to the East Berbice-Corentyne (Region Six).

The Minister’s first visit was to the Canje Secondary School, during which he donated a sum of money to assist the school in purchasing a Public Address (PA) System. The school’s Parent/Teachers Association had, in April, requested assistance to procure the PA system after which Minister Harmon challenged them to raise half the cost and his Ministry would match the sum. He was pleased that after taking ownership of the project, the group was able to raise the sum within a very short timeframe.

“That, I believe, is a part of your education; the education of relying on yourselves and not just waiting on handouts… You are taught how to be thrifty, raise funds and provide for yourself,” Minister Harmon told the gathering of students and teachers.

He added that the government provides an environment and the resources to help people flourish, but that it is by their own hands that they improve themselves, their families and their communities, thereby improving Guyana on a whole.

Minister Harmon also said that he viewed the donation as an important addition to the school’s physical resources.. “You are engaged in the process of equipping yourself for nation building so as you absorb all that your teachers are imparting to you, you must understand that you are preparing yourselves for the future,” he said.

Minister Harmon noted that the government wishes to ensure that every facility is provided for the youth of Guyana to be able to access education of a very high quality. He made a second donation, in the form of two computer systems, to the Humanitarian Mission of New Jersey Arya Samaj Incorporated (HMNJAS), located in Port Mourant to aid in promoting computer literacy among the youth in the area. The HMNJAS is a non-profit organisation established and funded by members of the diaspora and other contributors. The Mission provides after-school tutoring and other charitable services for children in the area.

The donation was made following a request from President of the HMNJAS, Pandit Suresh Sugrim, who indicated that the charity was looking to teach computer skills to children in the area to assist them with the completion of their assignments and aid in their general computer literacy. Minister Harmon addressed some of the students, who frequent the mission’s community centre and commended Pandit Sugrim on his tenacity in leading the mission and helping to tackle certain societal ills plaguing the community such as suicide, teenage pregnancy and domestic violence.

“We have to find ways of addressing these issues and this facility helps in this regard. The development of Guyana will not be done only by a government, but by people committed to seeing the country develop,” he said.

The Minister added that a country’s development also lies in the development of its human resources and this includes preventing them from endangering themselves. Minister Harmon congratulated Pandit Sugrim and pledged the government’s support to the projects of the mission.

In response to Minister Harmon’s visit and donation, Pandit Sugrim expressed his gratitude, stating that the computers will be a great help to the main objective of the mission.

“We have come to realise that handouts are not the solution to addressing poverty in Guyana so we have revamped our objective to break the cycle of poverty through education empowerment and create jobs,” the Pandit said.

The Minister’s visit to the Region also included a brief meeting with Vice Chancellor of the University of Guyana, Mr. Ivelaw Griffith as well as a visiting delegation of past students at the University’s Tain Campus. 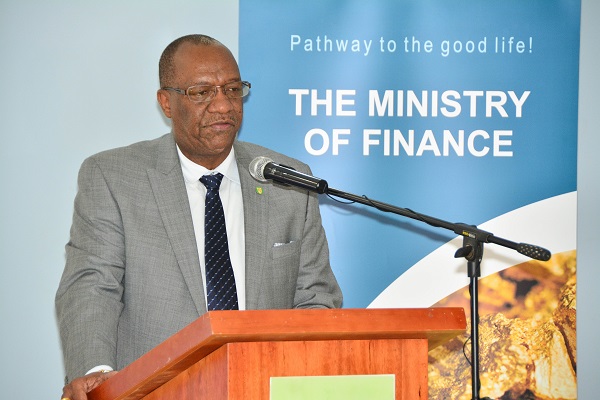 Minister of State, Mr. Joseph Harmon makes a donation to a teacher of the Canje SecondarySchool to assist with the purchase of a Public Address System.

“We thank you for the interest you have shown… I’m sure you’ll find great satisfaction in giving back to Guyana a lot of what you have learned from abroad,” the Minister said.

These visits were part of Minister Harmon’s trip to Region Six primarily aimed at meeting with community members and contractors in various communities to address planned rehabilitation works in the Region.