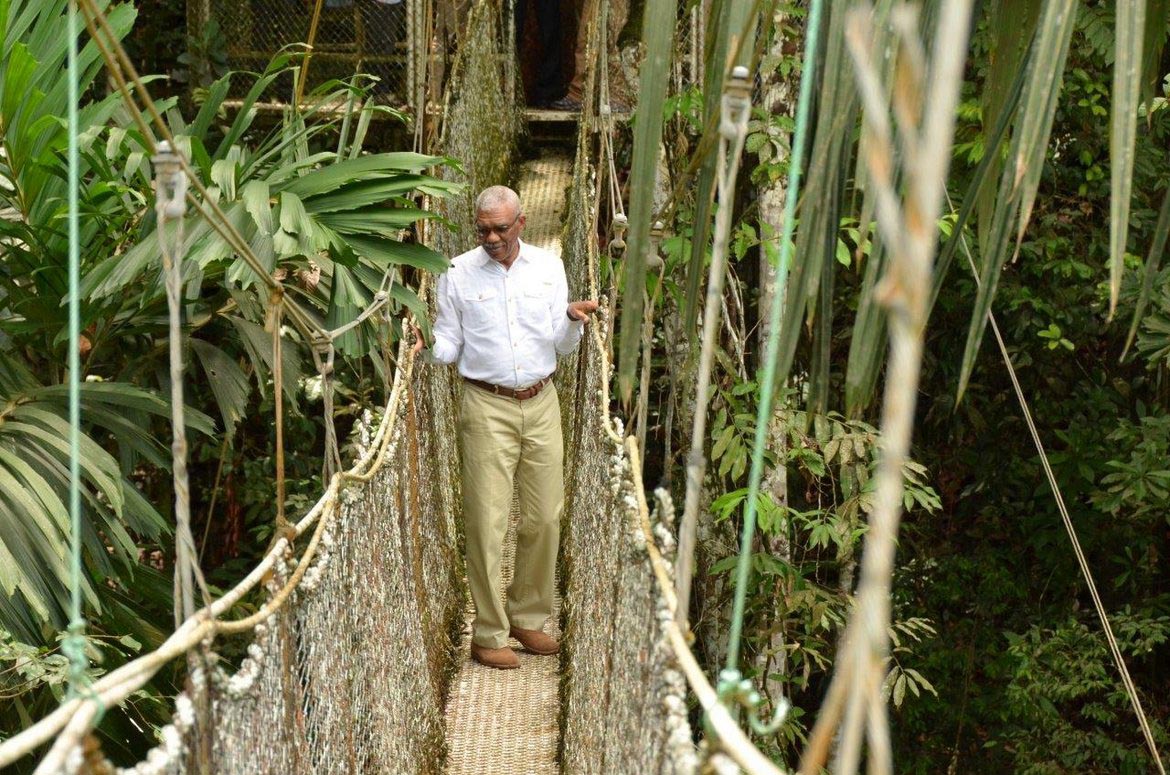 Georgetown, Guyana – (June 18, 2016) President David Granger and First Lady Mrs. Sandra Granger, are currently on a two-day visit to the Iwokrama International Centre for Rainforest Conservation and Development to get a first-hand look at the operations of the facility, which is located in Potaro-Siparuni Region (Region Eight), some 300 kilometres South of Georgetown.

The President and First Lady arrived this morning at the Surama Airstrip where they were warmly greeted by Minister of Indigenous Peoples’ Affairs, Sydney Allicock and residents of Surama Village before embarking on their journey by road to the Iwokrama Centre.

Speaking to the gathering at the Surama Village Office, the President reaffirmed his Administration’s commitment to sustaining Iwokrama and ensuring that it becomes a workable model for development and environmental protection.

“We cannot develop this country unless we learn the lesson of Iwokrama; the lesson of biodiversity, sustainable development, renewable energy, climate change and living together, not in conflict, but in concert with nature… Unless we solves these problems, Guyana will continue to be poor,” President Granger said.

Surama Village has set the bar for community-based tourism and environmental protection and the President expressed his Government’s appreciation to the residents for being in the forefront in this regard and urged them to continue working together to preserve the country’s natural patrimony for generations to come.

President Granger also spoke of the importance of proper infrastructure in the hinterland, the lack of which is a major impediment to development. He said that this is major priority for his Government and assured that these outlying areas will no longer be cut off from the coast. Work in this regard is on-going through the Ministry of Public Infrastructure. In fact, the residents of Surama will be commissioning their rehabilitated airstrip.

Additionally, works are in progress at the Fairview Airstrip. The President made an on-site spot check on his way to the Iwokrama River Lodge and Research Centre. This airstrip, which be become a hub for flights to and from Iwokrama, is likely to be extended to about 4200 feet to facilitate larger aircrafts and cater for increased air traffic. This improved infrastructure will also allow for faster and easier access to the Centre, particularly to Guyanese and Caribbean students, as well as tourists and researchers from around the world. 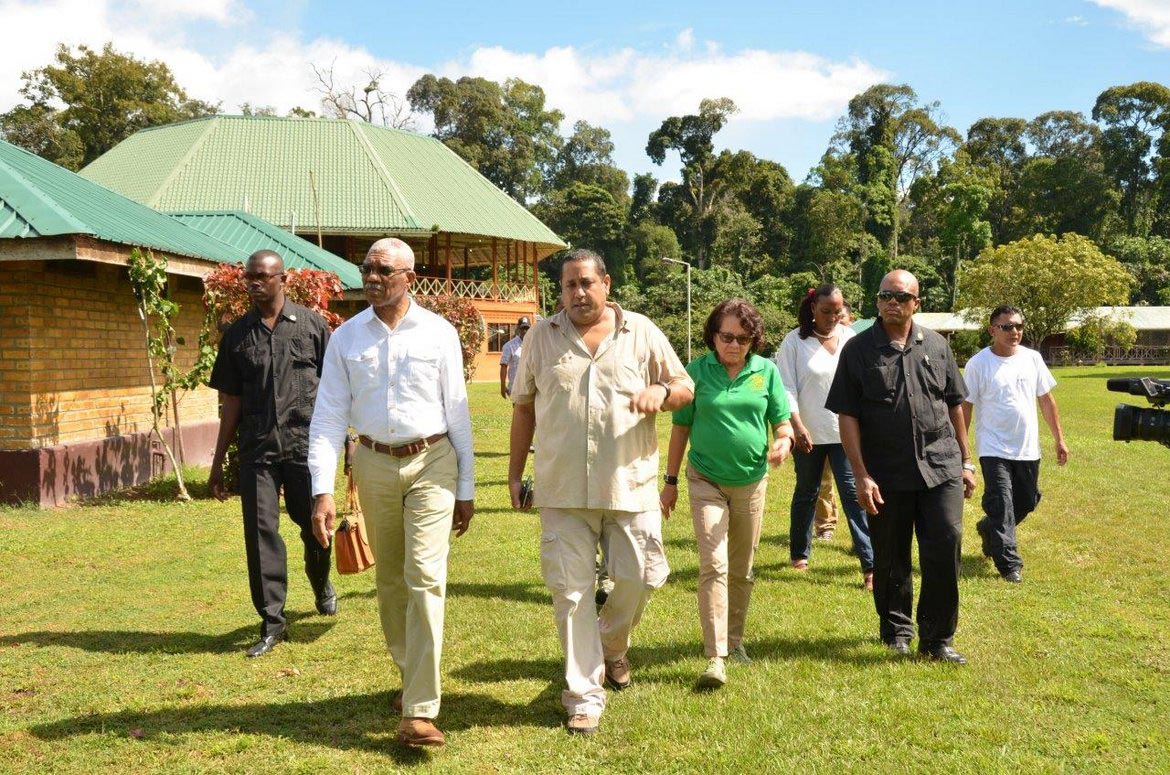 No trip to Iwokrama will be complete without having a glimpse of the birds-eye view of the forest from Canopy Walkway. The President and First Lady did not shy away from the steep trail to the walkway, which is suspended at some 33 metres (100 feet) from the forest floor, secured by steel cables. This was the first time in Guyana’s history that a sitting Head of State has crossed the canopy walkway.

Standing on one of the platforms along the walkway, the President said, “I would like to see more Guyanese children get an opportunity to walk almost at tree-top level and to look out and see what a beautiful country we have. It fills me with a great sense of national pride and deepens my commitment to the environment and to this green agenda that we have adopted.”

The Head of State explained that his vision for Iwokrama is for it to become, largely, a centre for education in biodiversity and conservation for Guyanese and the Caribbean Region.

“It is a huge area of 371 square kilometres and there is room for a variety of activities and my emphasis will be on biodiversity, botany, zoology and focusing on protecting our flora and fauna and preserving our wildlife… We want to see this as part of the education system,” the President said.

For many years, the Iwokrama Centre has been depending on donor funding. However, the President said that it is time for Guyanese to become more involved in the protection of the nation’s patrimony He explained that while the Government have a significant role to play, corporate Guyana and civil society, too, must recognise the importance of Iwokrama not only to the green agenda but to livelihood in Guyana as a whole.

“It is not going to be a Government project. It is going to be a national project and I expect that in the fullness of time, not only the Commonwealth would adopt it more fully, but the Caribbean Community will understand its importance to their future as well,” the President said.

First Lady Mrs. Granger, who is happy to spend a few days away from the hustle and bustle of the City, said that Iwokrama will be a good laboratory for testing the country’s transition to clean energy and biodiversity and can play a major role for creating a new database of different species of flora and fauna. 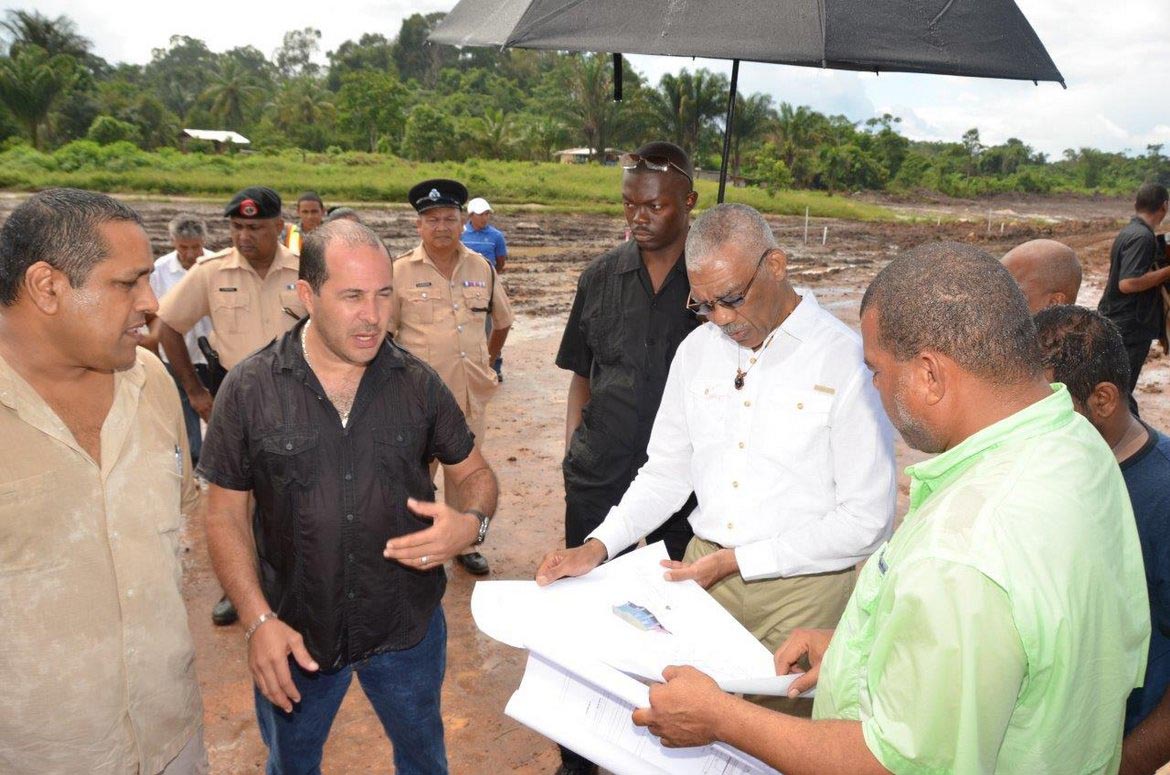 Meanwhile, Chief Executive Officer of the Iwokrama Centre, Dr. Dane Gobin said that Iwokrama is working to change its financial model as it cannot rely solely on donors anymore. In this regard, the Centre is embarking on a sustainable forestry project, which will be certified by the Forest Stewardship Council (FSC).

“This started last year, we have a joint venture with Farfan and Mendez and we continuing to build capacity… We are actually looking for high value niche markets and ultimately what we would like to do is to have an Iwokrama brand on this wood, which would stand for best practice, community integration and best environmental practice,” Dr. Gobin said.

The Centre is also actively marketing itself through tourism. The CEO disclosed that Iwokrama gets an average of 1100-1300 tourists annually. He said that while this is not a large amount, it is consistent figure. He said that with the advent of the rehabilitated Fairview Airstrip, the Centre will be looking to attract more visitors and thereby increasing its earnings.

Additionally, the Centre is offering training services. Every year, it hosts Operation Wallacea, where a network of academics from European and North American universities conduct biodiversity and conservation expeditions. Dr. Gobin said that while the Centre does not make a lot of money from this venture, the research value is immense.

The Iwokrama International Centre for Rainforest Conservation was established in 1996 through an agreement by the Government of Guyana and the Commonwealth Secretariat with the aim of managing and preserving 371,000 hectares of pristine rainforest. Former President Desmond Hoyte Committed to the Iwokrama Rainforest Project in1989. 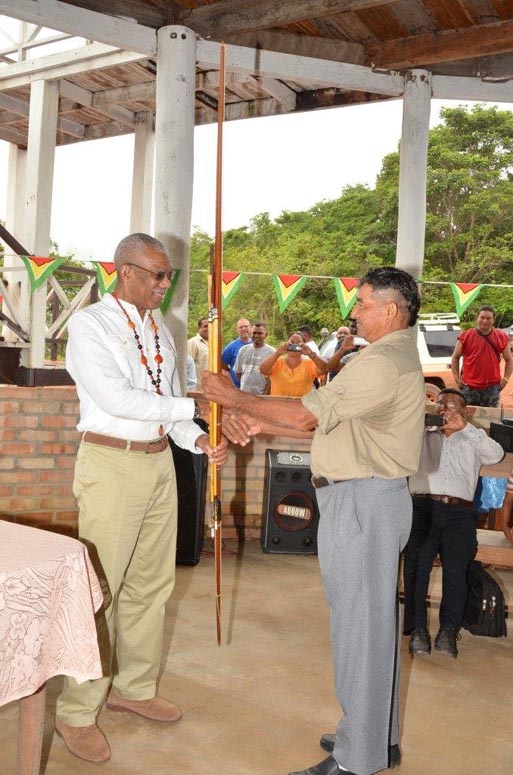 President David Granger receiving an arrow and bow, which he called a “silent missile” from Daniel Allicock of Surama Village

Transcript of the address by His Excellency, Brigadier David Granger, President of the Cooperative Republic of Guyana, at the reception to bid farewell to the 11th Chinese Medical Brigade and to welcome the 12th Brigade, hosted at the Chinese Embassy on