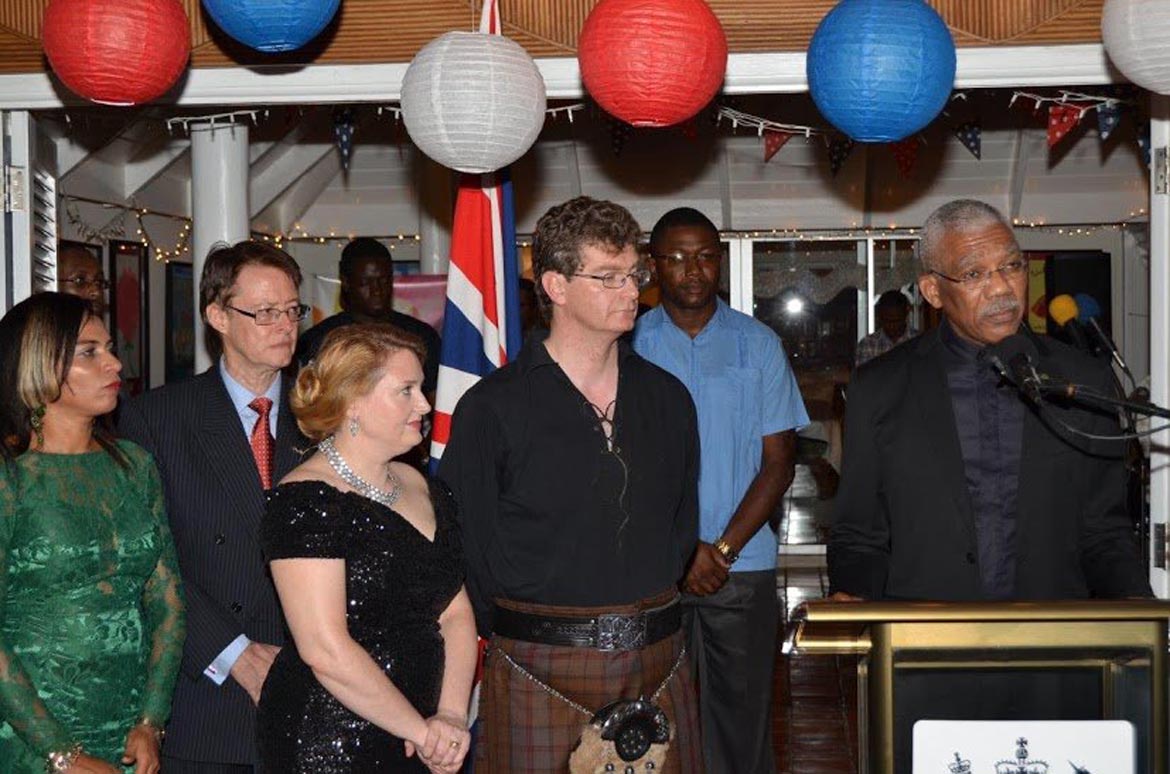 Georgetown, Guyana – (June 17, 2016) President David Granger, last evening, extended best wishes to Britain’s Queen Elizabeth II on her 90th birthday, even as he recommitted to deepening the fertile relations shared by Guyana and the United Kingdom, at a reception held at the residence of the British High Commissioner to Guyana, Mr. Greg Quinn.

The President, accompanied by his wife, First Lady, Mrs. Sandra Granger, High Commissioner Quinn and his wife, Mrs. Wendy Quinn, along with government functionaries and other dignitaries attended the event to mark the Queen’s milestone anniversary. President Granger recounted that the majority of citizens of Guyana living today know of only one British sovereign; one who has spent almost her entire adult life in service to her country and the Commonwealth. This, he said, undeniably, is a remarkable achievement.

“Guyana expresses its appreciation for Her Majesty’s role as symbolic head of the free association of independent states known as the Commonwealth of Nations, the majority of members of which, like Guyana, are small states. Commonwealth membership increased and its international influence and significance intensified during what future generations might well call a new ‘Elizabethan’ age of inter-state cooperative relations. Guyana continues to enjoy the Commonwealth’s succour and support and we value its vigilance over our territorial integrity,” the President said.

The Head of State noted that Her Majesty, Queen Elizabeth II has reigned with grace for more than 60 years and Guyana is gratified by the quality of cordial relations with Britain.

“We thank Britain for its sustained support for Guyana’s development efforts and more recently, for its receptiveness to our request to re-engage with security sector reform,” President Granger said.The President also said that the Government and the people of Guyana are reassured by the reaffirmation of the United Kingdom’s support for Guyana’s position on the attempts by the Bolivarian Republic of Venezuela to overturn the previously settled borders. Security, he said, has been pivotal to ensuring Guyana’s Independence over the last 50 years, even though the emergence of transnational threats such as narcotics-trafficking, trafficking in persons and terrorism requires the country to rely on cooperation with partners in the international community.

“Guyana still seeks that promised peace. We still yearn for the complete resolution of this obnoxious claim to our territory. We were heartened, therefore, by the unambiguous asseverations of the Parliamentary Under-Secretary of State at the Foreign and Commonwealth Office who iterated that the Guyana-Venezuela boundary was fixed in the 1899 Arbitral Tribunal in Paris and that “…the UK supports the territorial integrity of your country unequivocally”,” President Granger told the gathering.

He also noted that in addition to Queen Elizabeth II’s significant milestone, the year 2016 is indeed a celebratory one for Guyana as the country continues to mark its Golden Jubilee Anniversary of Independence, which was ushered in on May 26, 1966.

This moment, he said, has further strengthened our resolve to redouble efforts to ensure a good life for all Guyanese. Further, the launch of the United Kingdom-Caribbean Fund, this year, will assist in the provision of this good life, as it will aid in infrastructural works that can contribute to achieving development targets. Assistance in health and education will help to meet the objective of having a healthy population and an educated nation, the President said.

Meanwhile, High Commissioner Quinn said that 2016 has indeed been a remarkable year for the two countries as they have achieved quite a number of accomplishments in just fewer than six months.

“This year has been a year of many firsts for the Guyana- United Kingdom relations. In April, we saw the first visit by the naval ship since 2001; in May we saw the visit by the Minister from the Commonwealth Office since 2002. I trust there will be many more firsts in both the coming months and the years. I think what that shows, is that the relationship between our two countries is in good shape and it is not just about the visits. There is much substance. We continue our work on security reform and combating organised crime through assistance provided by, for example, the UK’s Crime Agency. This year saw the launch of the Caribbean, UK Infrastructure Fund worth some $16Billion…These are all grants, not loans which must be repaid,” Mr. Quinn said.

The event was also attended by, Secretary-General of the Caribbean Community (CARICOM), Ambassador Irwin LaRocque, Minister of Finance, Mr. Winston Jordan, Minister within the Ministry of Public Health, Dr. Karen Cummings, Attorney General and Minister of Legal Affairs, Mr. Basil Williams, Members of Parliament, members of the diplomatic corps and the private sector.

Transcript of the address by His Excellency Brigadier David Granger, President of the Cooperative Republic of Guyana, at the launch of “Governance, Transparency and Accountability” by former Auditor-General, Dr. Anand Goolsarran at the Pegasus Hotel on