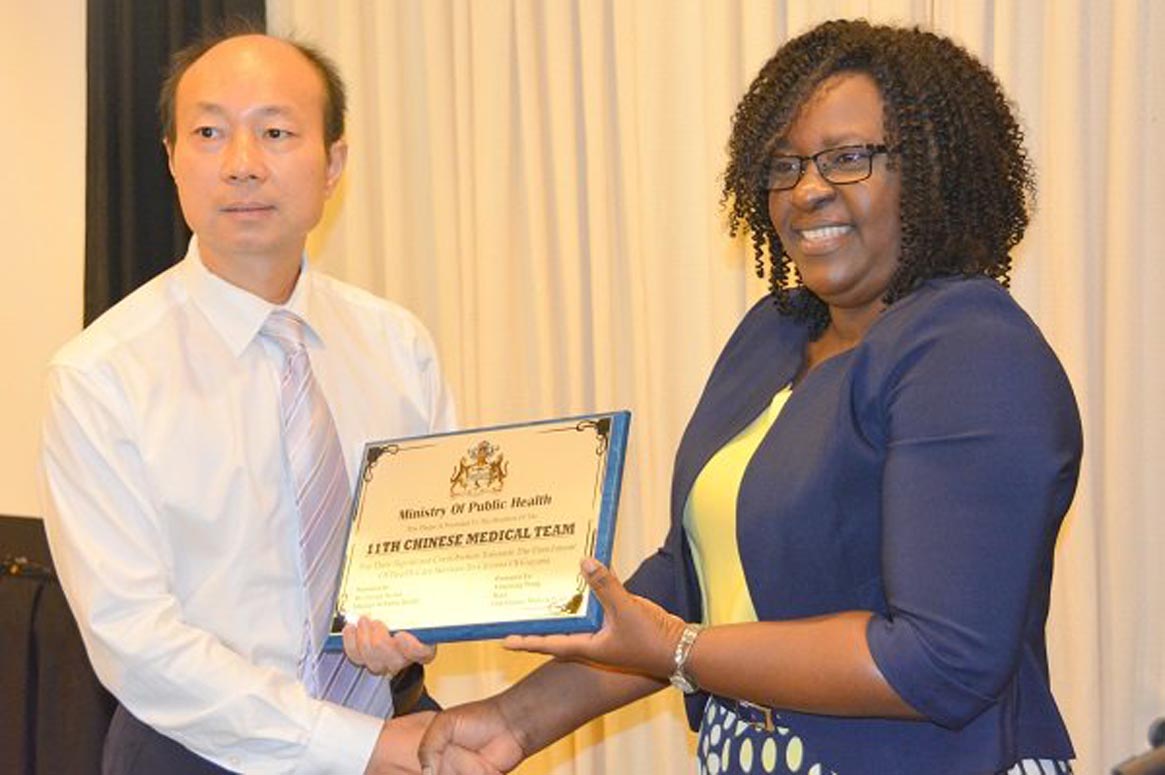 Georgetown, Guyana – (June 17, 2016) The Government of Guyana, yesterday, officially bid farewell to the 11th Chinese Medical Brigade at a cocktail reception held at the Herdmanston Lodge, Queenstown, even as it welcomed the new batch of medical professionals, who arrived in Guyana a few days ago.

Advisor on Climate Change at the Ministry of the Presidency, Ms. Ndibi Schwiers-Ceres, who gave remarks on behalf of Minister of State, Mr. Joseph Harmon, expressed hope that the outgoing team will take with them pleasant memories of Guyana that will last a lifetime, as well as a sense of fulfilment.

“This self-satisfaction ought to result from knowing that even though your stint has come to an end, your unselfish contribution to our health care system, and by extension, to our country has left us in a better place,” Ms. Schwiers-Ceres said.

Minister within the Ministry of Public Health, Dr. Karen Cummings presents Director of the 11th Chinese Brigade Dr. Wang Yongxiang with a plaque of appreciation on behalf of the Ministry.

She added that all Guyanese are grateful for the 23 years of service provided by the Chinese medical specialists, as well as the donations of much-needed medical equipment and training for local health care professionals.

“Our relationship extends beyond the realm of healthcare to other areas; infrastructure, agriculture, education, ICT and trade and this relationship has redounded to the benefit of both our countries… At country level, the cordial relationship we share with the People’s Republic of China extends for some 44 years and is founded on many principles; trust, country driven process, solidarity and mutual respect,” she said.

Meanwhile, Minister within the Ministry of Public Health, Dr. Karen Cummings noted that it is gratifying to witness the continuation of the fruitful bilateral relationship that Guyana and China share.

“We, at the Ministry of Public Health, recognise the intrinsic role Chinese health professionals have played and continue to play in our local medical system,” she said. 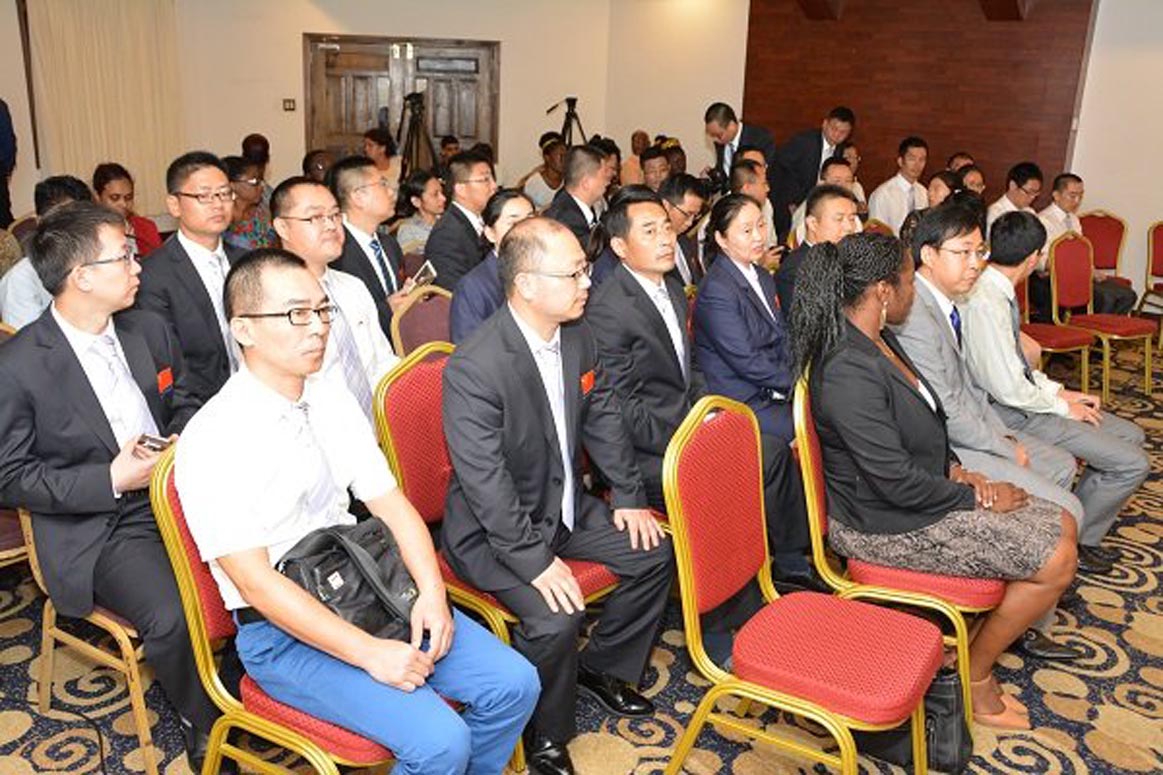 Members of the 11th and 12th Chinese Medical Brigades at the farewell and welcome cocktail reception.

The Minister added that the 11th Brigade has demonstrated profound competence and professionalism and that Guyanese are very satisfied with the work that they have done during their stint here.

“You have worked to save many Guyanese lives and what you have done is priceless,” Dr. Cummings said, adding that the Government looks forward to more collaborative support from the Peoples’ Republic of China.

In response to the sentiments made by the Guyana Government, Chinese Ambassador Mr. Zhang Limin said he was pleased that the relationship between Guyana and China has grown more fruitful over the years. He alluded to several contributions that China has made in the area of healthcare, including a US $400,000 donation of medical equipment made in 2015 as well as the establishment of a trauma centre at the Georgetown Public Hospital and a centre for laparoscopic surgery at the Linden Hospital Complex.

“China’s medical system has greatly improved the medical facilities of Guyana and fully demonstrates the profound friendship of the Chinese people towards the people of Guyana,” the Ambassador said.

He also announced that China is ready to continually support Guyana in other ventures.

“China has so far dispatched 12 medical teams to Guyana. The Chinese medical teams have been working scrupulously to serve the local people. They have made important contribution to improving health care in Guyana and enhancing the friendship between the people of China and Guyana,” he said.

Representatives from both brigades gave remarks, with the outgoing brigade recalling warm sentiments of Guyanese hospitality, and the incoming brigade promising to work diligently with the local medical staff to bring high quality healthcare to the Guyanese people.

At the end of the reception, Dr. Wang Yongxiang, head of the outgoing 11th Brigade, presented Minister Cummings with a token of appreciation for the hospitality they received during their tour in Guyana.

Each member of the outgoing team received tokens of appreciation for their work over the last two years in Guyana. The 12th Brigade, which comprises a 16-member team, were also there to fete with their predecessors, even as they prepare to perform duties at the Georgetown Public Hospital, the Linden Hospital Complex and at medical outreaches countrywide.

President meets new Consul General to Nickerie, Suriname – as she prepares to embark on her new role