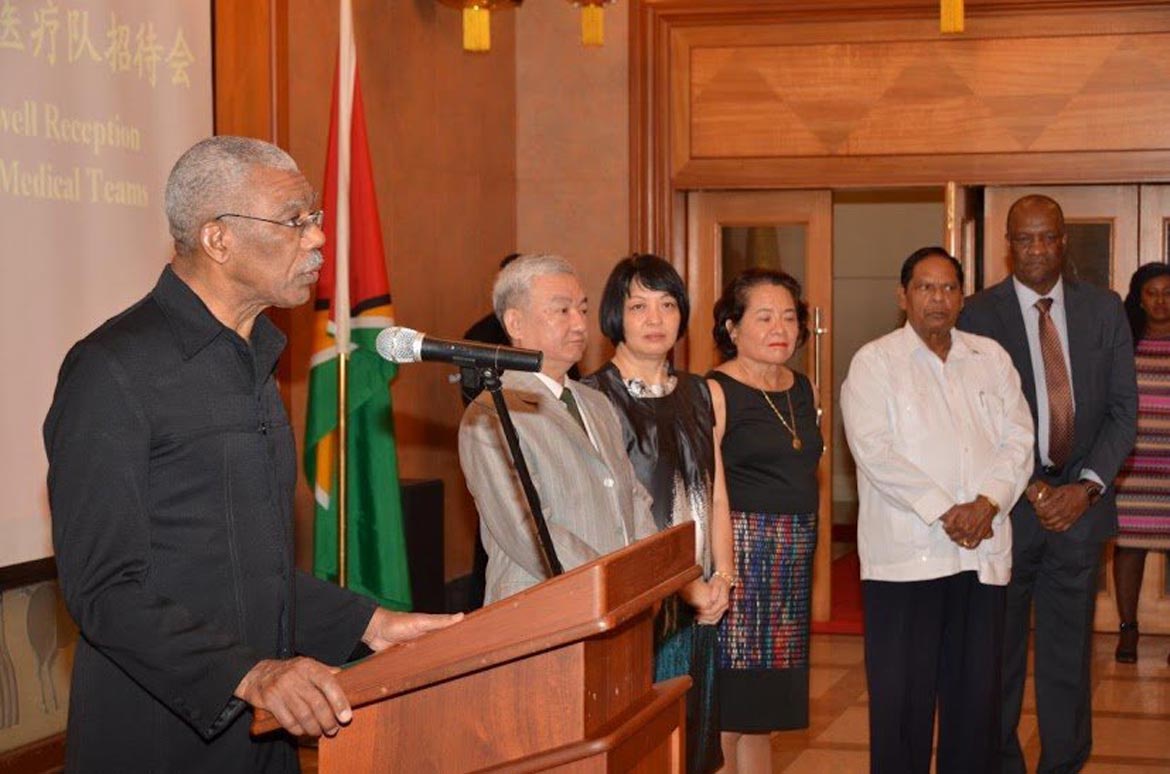 Georgetown, Guyana – (June 15, 2016) President David Granger, this evening, attended a reception to bid farewell to the 11th batch of the Chinese Medical Brigade and welcomed their replacement; a 16-member team of medical professionals, who arrived in Guyana two days ago. The reception was organised by the Chinese Embassy in Georgetown.

The Head of State, in brief remarks, said that the relationship between Guyana and China has flourished on many levels since formal diplomatic relations were established on June 12, 1972, particularly in the area of health.

“Cooperation in the health sector has been a distinguishing feature of human relations, which emphasise the formal engagement between our two republics and, most particularly, the personal and everyday friendship between our two peoples,” President Granger said.

He said that the presence of the Chinese medical team in Guyana has contributed significantly to the development of a healthy population and, thereby, has contributed to the wealth of the nation.

“Thousands of our Guyanese have benefited from the expertise of these specialists and from the equipment, which was donated under the programme. Guyanese are extremely grateful for the work and contributions of the Chinese Medical Brigade,” the President said.

Additionally, the President reminded that the cooperation between the two countries is further evidenced by the establishment of an Eye Centre at the Georgetown Public Hospital Corporation (GPHC) and the commissioning of a centre for laparoscopic surgery at the Linden Hospital Complex (LHC) in September, 2014.

Meanwhile, Chinese Ambassador to Guyana, His Excellency Zhang Limin said that China has, to date, dispatched medical teams to over 70 countries in Asia, Africa, Europe, Latin America and the Caribbean and they have treated over 300 million patients. The Ambassador also spoke of the warm and cordial relations between Guyana and China over the past 44 years, which he said keeps deepening with time.

The first batch of Chinese medical professionals came to Guyana in 1993 as a result of the Protocol on Medical Cooperation, which was signed between the two countries on May 26, 1993. During the course of their two-year stint, the outgoing batch of medical professionals treated over 41,000 patients and performed 6000 surgeries.

Transcript of the address by His Excellency, Brigadier David Granger, President of the Cooperative Republic of Guyana, On the occasion of the United Nations’ 70th Anniversary October 24, 2015