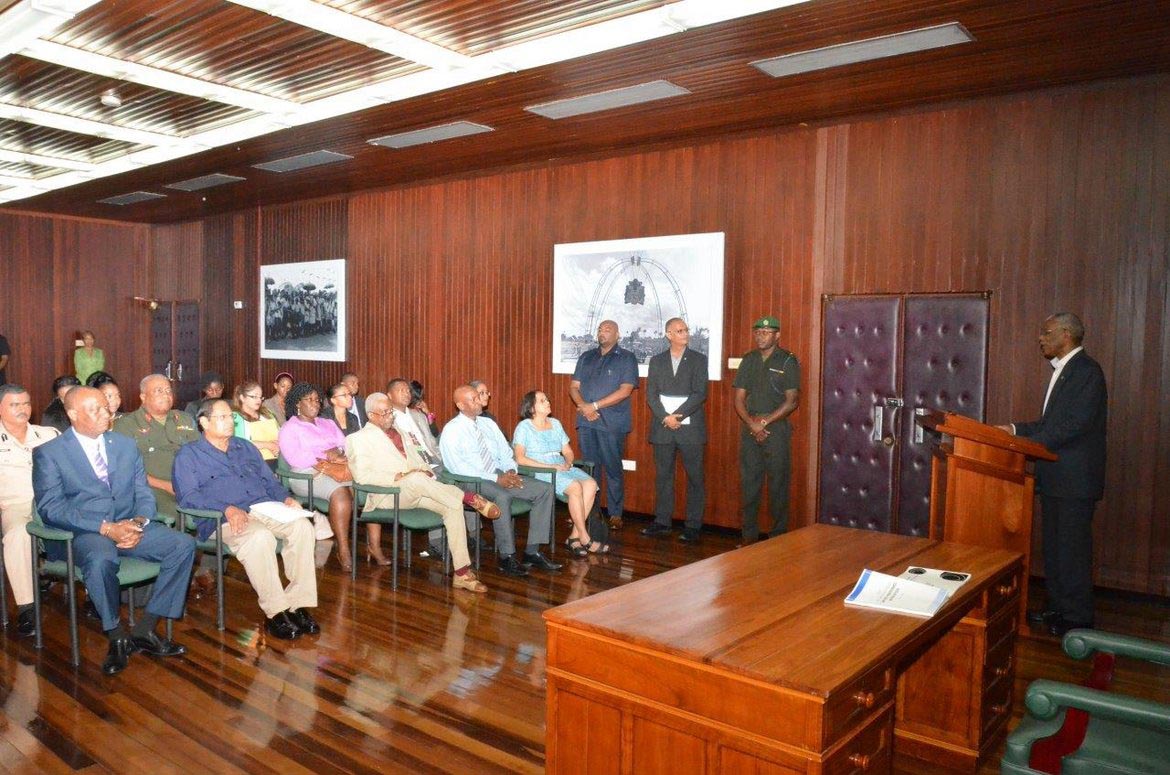 Georgetown, Guyana – (June 1, 2016) President David Granger, today, committed to ensuring that there is penal reform and that Guyana becomes a safe place for all to enjoy a good life, when he received the Report of the Commission of Inquiry (CoI) into the Camp Street Prison unrest, which claimed the lives of 17 prisoners on March 3, 2016.

The Report was handed over at the Ministry of the Presidency by retired judge, Mr. James Patterson, who chaired the Commission. The other Commissioners, Mr. Dale Erskine and Ms. Merle Mendonca also attended the handing over ceremony along with Prime Minister, Mr. Moses Nagamootoo and Minister of State, Mr. Joseph Harmon.

President Granger said the Government and the nation is grateful to the Commission for its work, noting that the tragedy was the worst of its kind in Guyana’s history and that it is important that the events of what transpired on that fateful day come to light.

President David Granger addressing the attendees at the handing over ceremony, today, at the Ministry of the Presidency

“There are people who know what happened but unfortunately I am not among them and so I wanted to find out what happened, why it happened, how it happened…because I want to prevent a recurrence. I do not want it to happen again. I don’t want anybody to die again in the prisons under those circumstances or any circumstances,” President Granger said.

The President pledged that his administration will do everything possible to ensure that the weaknesses and challenges in the centuries old prison system are corrected.

“We have to understand that we inherited a prison system and the three main prisons were built during the reign of Queen Victoria. They are all over a century and a quarter old, some older and the two newest prisons (Timehri and Lusignan) are really auxiliaries to the three main prisons. Over the years, the prison population has grown and, unfortunately, the population has outgrown the infrastructure, which was designed over a century ago. So we are aware that something must be done and before we take action, we had to find out what the conditions were at the Georgetown Prison because it is at the heart of the city and there are schools, there are people, there are business places, and we want to ensure that there’s never a threat to human safety ever again,” the President said.

To this end, he said that his administration, even before the completion of the Commission of Inquiry, has been taking steps and putting systems in place to address the conditions, lack of staff and other weaknesses in the penal system. The President also noted that now that the Report has been handed over, everything will be done to ensure that the recommendations are implemented.

“…Over the past few months, not a single National Security Committee meeting has taken place without prison reform being featured. We want to make Guyana safe and, at the same time, we want to ensure that persons, who are put into what you call correctional facilities, do not feel that this is a lifetime occupation… 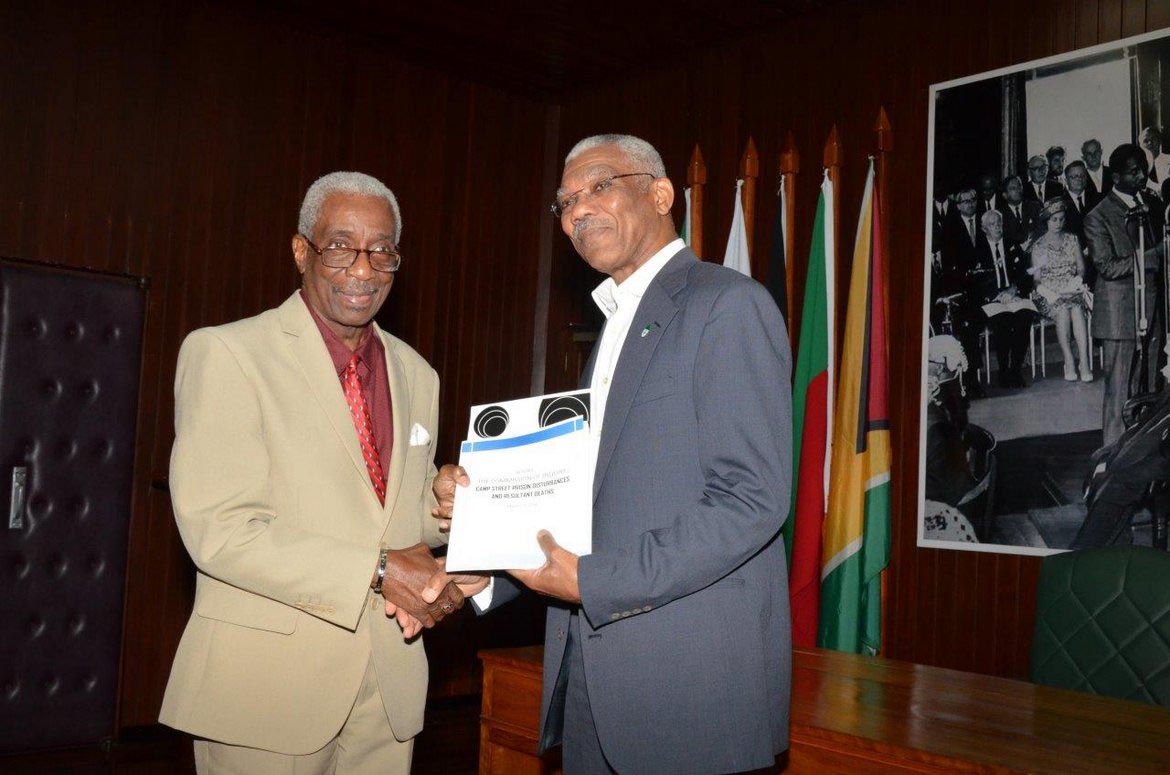 …No President can be happy to see young people spend so much of their lives in the penal system. [For] that reason, we engaged the judicial section of the government so we can look at sentencing policies and alternatives to incarceration,” he said.

Additionally, the relocation of high profile criminals from the Camp Street Prison to the Mazaruni Prison will continue even as the Government continues to put systems in place to boost the security and capacity of the Cuyuni-Mazaruni (Region Seven) facility.

“Starting this year, prison officers will be trained in the Police Academy so we expect that that will improve the level of competence. The number of prison officers would be augmented so that Mazaruni will have a larger core and we will have a team of officers [who] will be able to respond to incidents like the last one so there would be no need to involve the police and the Guyana Defence Force. They will be able to handle such situations,” the President said.

Meanwhile, Justice Patterson, in brief comments, thanked the Government for the faith reposed in the Commission to conduct the investigations. He also expressed hope that the urgency of the recommendations is noted.

“I would ask His Excellency, with his due diligence that he has always deployed, to look at the recommendations that we have made and it is hoped that they will be executed in a timely manner because they deserve so to be executed,” he said.