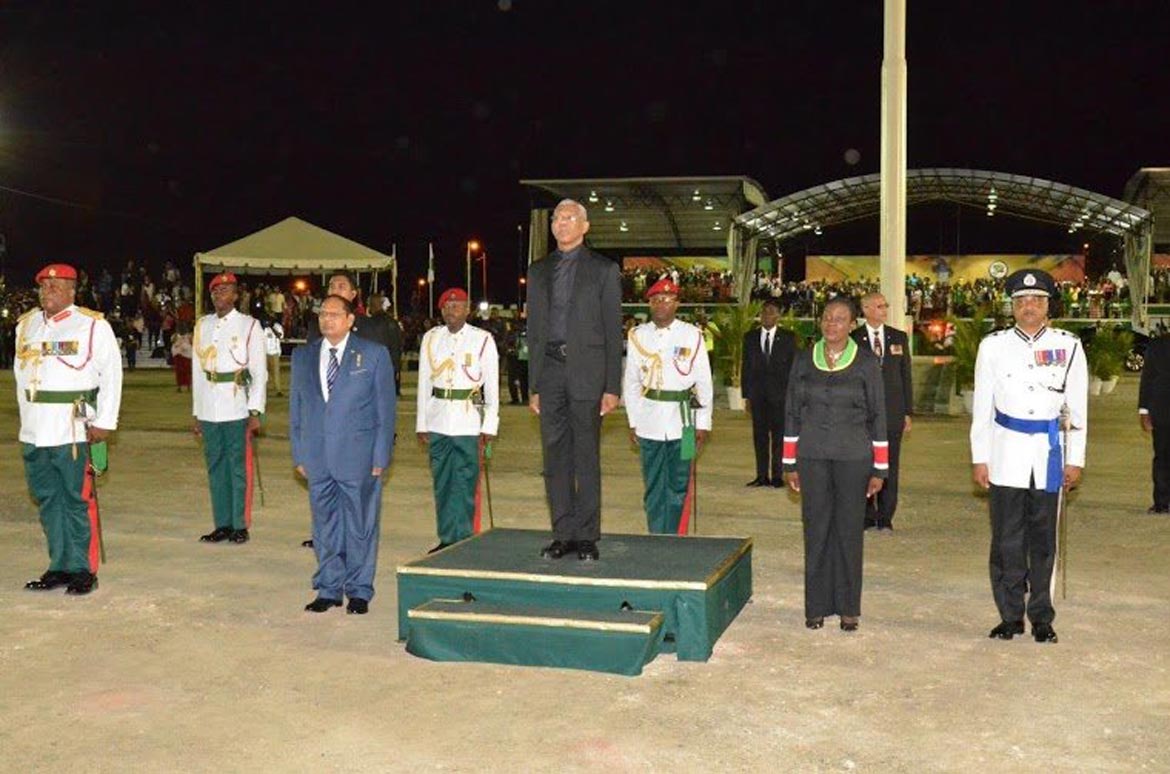 Georgetown, Guyana – (May 26, 2016) Thousands of Guyanese from all walks of life, last evening, turned up at the D’urban Park to witness the hoisting of the Golden Arrowhead as the country celebrates its 50th Independence Anniversary, an occasion that every person of Guyanese heritage has been eagerly anticipating since the beginning of 2016.

President David Granger, First Lady Mrs. Sandra Granger and other members of the First Family received a warm welcome from the crowd, who stood to their feet, waving their flags and cheered loudly.

The President and First Lady joined Prime Minister Moses Nagamootoo and his wife, Mrs. Sita Nagamootoo, Government Ministers, members of the diplomatic corps and a number of overseas guests including the Prime Minister of Barbados, Freundel Stuart and Commonwealth Secretary General, Baroness Patricia Scotland to witness the military parade by ranks of the Joint Services and a cultural show.

Head of State, Brigadier David Granger receives the Presidential Salute from the Guyana Defence Force on his arrival at D’Urban Park for the Flag Raising ceremony to mark the 50th Anniversary of Guyana’s Independence.

The medley of national songs, dances, and fusion of drums showcased in all its glory, Guyana’s rich cultural mosaic. At exactly midnight, the Golden Arrowhead, the largest one ever created, unfurled atop the the 180 feet flagpole, which was the highlight of the evening’s proceedings. This was followed by a fireworks display by the Guyana Defence Force.

Meanwhile, for many Guyanese, many of whom arrived at D’Urban hours in advance, the evening meant much more than just hoisting of the flag.

Malcolm Panday was one of those persons. He said, “I feel emotional. I feel that we have had a lot of ups and downs but God has blessed us. Now we are 50 years [old] our people are exuberant. They are very happy and this idea of making it such a big occasion has brought a lot of patriotism. I was alive in 1966 when the first flag was hoisted and I am happy and thankful to god that I am alive to see this… Our town is getting clean; our country is getting wonderful and a renewed joy and patriotism has come to our country… I wish the government very much success and I wish the people of Guyana will realise national unity, which evaded us for fifty years… I felt very emotional and I am thankful that God has brought us thus far.”

Erma Kittshaw, who spent most the evening standing, said that she came all the way from the United States to be part of this historic event. She said, “I worked with the government when we became Independent and I am so proud to be here today.” 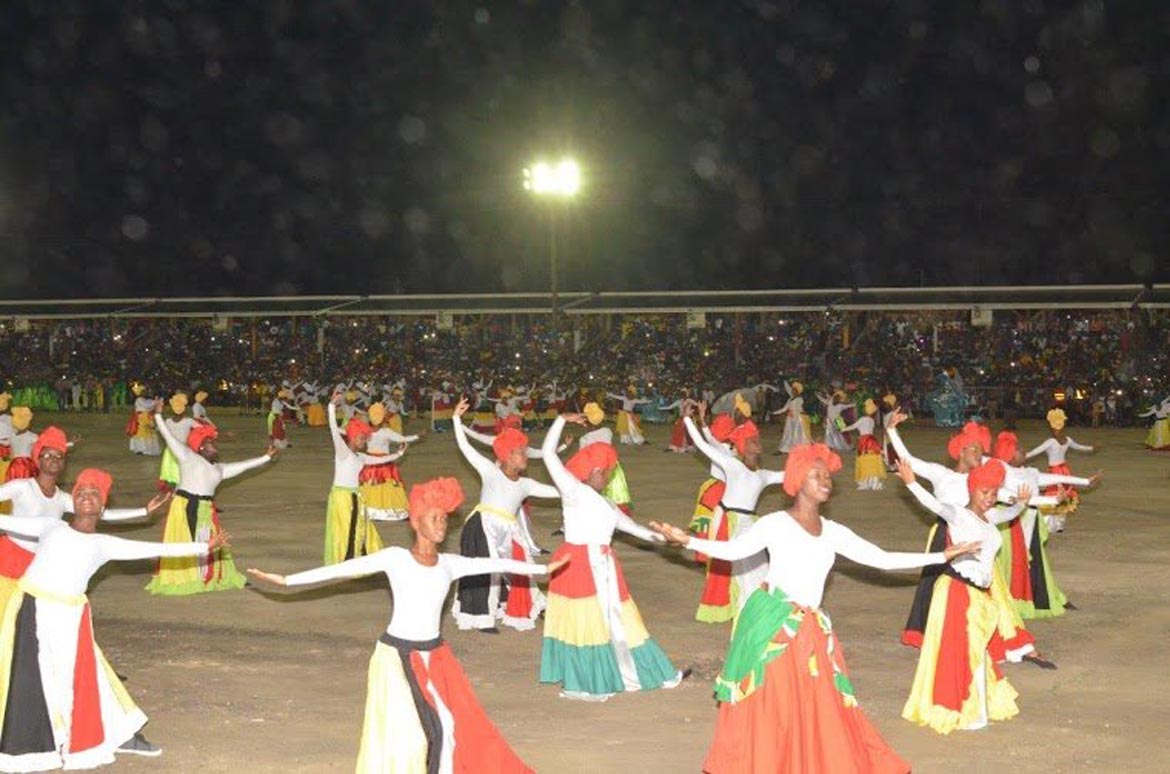 Another overseas-based Guyanese said that, “I am so excited. I was nine years old when we got Independence and so I am enjoying this and even if I had to crawl out of New York, I would have done so to come to this. I am too excited. I am so proud of what I saw because I have always dreamed this dream. We are proud of President Granger and we pray that God continues to bless and watch over him.”
Barbara Welsh another excited citizen said, “I am so elated. For me, it is a grand occasion because the first time the Golden Arrowhead was hoisted, I was just eleven months so this is very momentous for me and I made a special effort to be here tonight. I don’t think one word can describe what I am feeling. I really can’t put it into words. Just being able to see so many Guyanese together, celebrating this occasion; it’s amazing.”

Similar sentiments were expressed by Andrew Carrington, who said that he was born two years before Guyana gained its Independence and now that Guyana is celebrating 50 years as an Independent nation he couldn’t miss being a part of the festivities. 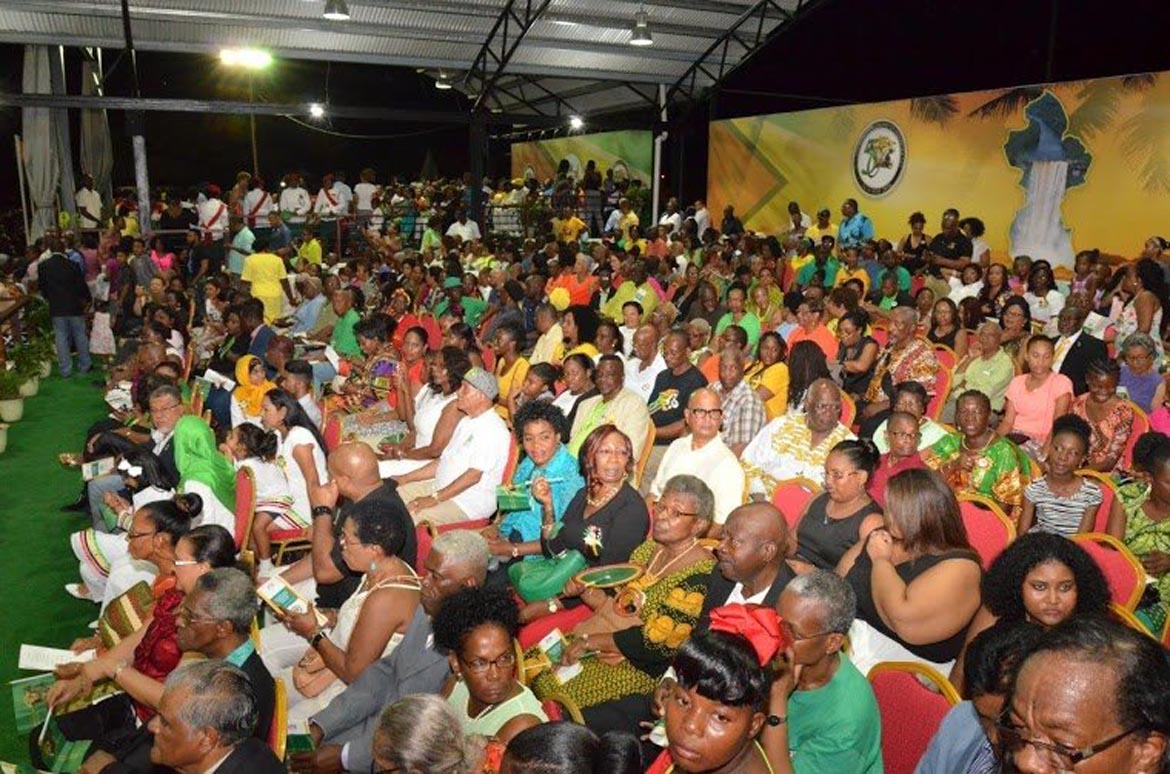