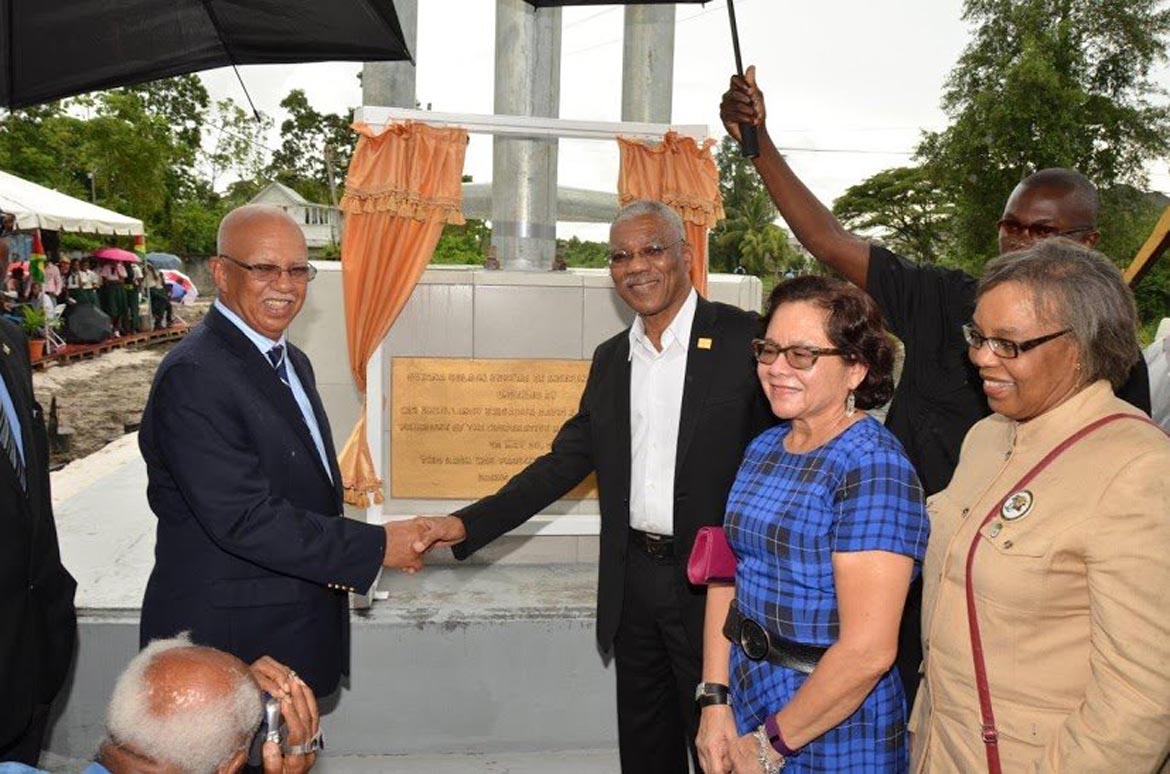 Georgetown, Guyana – (May 20, 2016) President David Granger, today, committed to ensuring that Georgetown is restored to its former glory and that the capital city will regain its reputation as one of the Caribbean’s most picturesque and pleasant places for residents and visitors, in his address at the unveiling of the 50th Independence Anniversary Arch.

The $20M Arch was financed wholly by Banks DIH Limited as an Independence anniversary gift to the nation. It was designed by Mr. Vaniar Gutierrez of the Ministry of Public Infrastructure and fabricated by VSH Steel with hot dipped galvanised and welded steel pipes.

After giving a historical account of the founding of Georgetown over 230 years ago, President Granger said the capital city is now being refashioned and renovated and that the arch is a symbol of hope for the future. It serves as a permanent landmark delineating the southern entrance into, and exit out of, the nation’s capital and also marks the southernmost boundary of our city.

However, the President said, traversing under the structure means more than entering into a different jurisdiction. It signifies the gateway to urban renewal and must represent the country putting the past to rest and looking forward only to the future.

President David Granger and Chairman and Managing Director of Banks DIH Limited, Mr. Clifford Reis shake hands in front of the insignia inscribed at the base of the 50th Independence Anniversary Arch, while First Lady, Mrs. Sandra Granger and the President’s sister, Mrs. Barbara Backer look on.

“This Arch … will not only separate the city from its surrounding areas but the future from the past. It defies the disappointments and set-backs of our history; it defines our identity; it denotes the victory of our people’s independence after 350 years of colonialism; it is a beacon of prosperity for rural folk, who continue to settle here from the regions,” President Granger said.

At the same time, he said, the arch is not unique, rather, our people, particularly those in rural communities built their own arches to celebrate Independence in 1966. There were ‘village arches’ in Adventure, Agricola, Bartica, Bagotsville, Corriverton, Leguan, Leonora, Lusignan, New Amsterdam, Rose Hall, Ruimveldt and Wauna. The Head of State said that it is his hope that the city, which lies beyond the jubilee Arch “will witness neither bloodshed nor iniquity but, instead will be built with the bricks of peace and bonded with the mortar of prosperity”.

The President expects too that Georgetown, in the coming years would vindicate the vision of the French Naval Commander Armand de Kersaint, who had written that “It was…considered necessary, on account of the great extent of the river and its dependencies, to establish a capital, which would become a business centre, where religion would have a temple, justice a palace, war its arsenals, commerce its counting houses and industry its factories; where, also, the inhabitants might enjoy the advantage of social intercourse.” 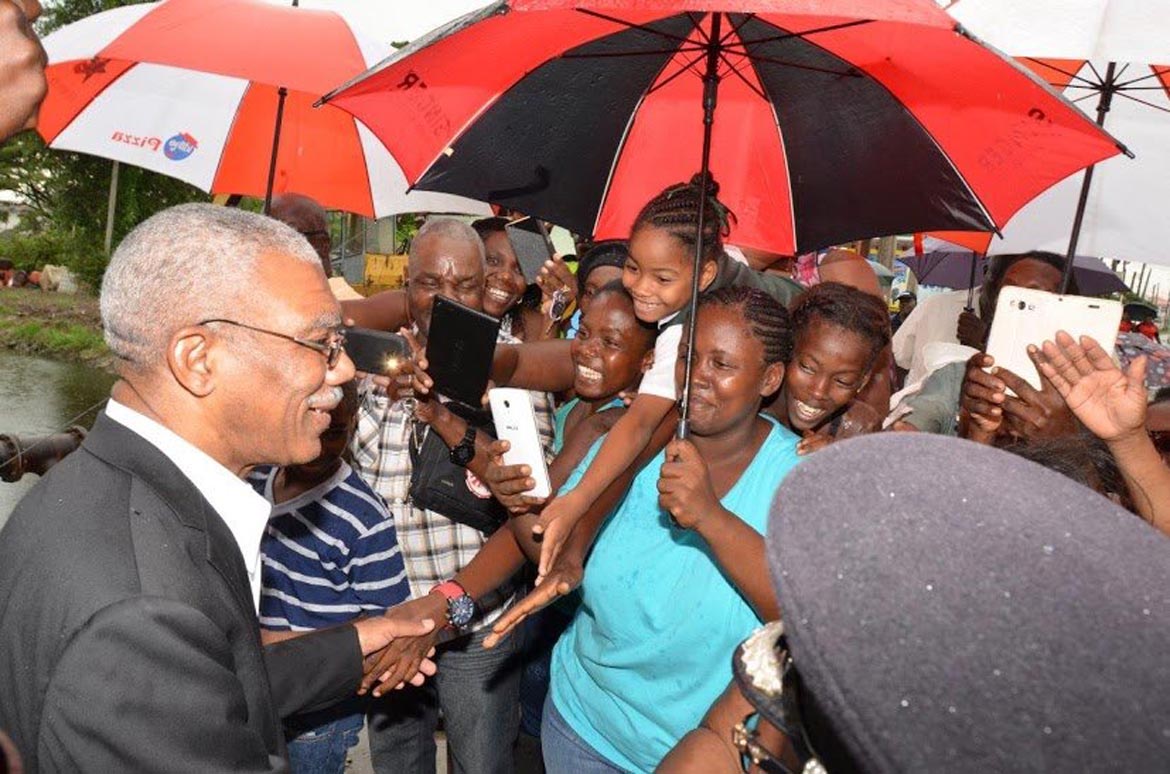 Members of the public clamour to greet President David Granger at the close of the unveiling exercise, today, at the junction of Eccles and Agricola, East Bank Demerara.

Noting that Georgetown residents reclaimed their capital on March 18 with the return of Local Government Elections after a two decade absence, President Granger said that empowering the people will lead to a different path for the city; one which will not be mired in political mud; one which will never be neglected again no matter which party is in office.

“Georgetown is remaking itself. The city renovation is underway. Georgetown, with good management and the collaboration of civil society, the business community, our foreign friends and our citizens will recapture its appellation as a ‘garden’ city. It will never again become known as the ‘garbage’ city,” he declared. He added that “Georgetown, the only English-speaking city on the Continent of South America, is decorated with open public places; gardens, parks, promenades and, most recently, an extensive Merriman’s Mall, a sanitary Stabroek Square and a spacious D’urban Park, which are places of relaxation, leisure and play and also of vending.”

The President, who since his assumption to office a little over a year ago has continued to advocate for a ‘green’ economy and city, noted that this is quickly being realised in the cleaning-up and manicuring of the natural landscape.

“Georgetown is becoming a clean city, a green city, a serene and safe city once again. Sanitation and drainage, to avert the danger of vector-borne disease… are top priorities,” he said.

While the capital city is the centre of commerce and industry and the country’s main transportation hub, it “must become a walking city where people, in the evenings, can stroll with their families to enjoy the outdoors, jog or simply ‘hang’ with friends. Safety and security are essential to the ‘good life’,” the President said.

However, he pointed out, that every citizen, and visitor, must take ownership of their environment. Businesses too, public premises and municipal properties, “must all go green, adapting solar and wind power, introducing renewable energy technologies, solid waste disposal, recycling waste and prohibiting the use of non-biodegradable materials.”

In his address, Minister of Public Infrastructure, Mr. David Patterson reiterated that the unveiling of the arch is a spectacular way to celebrate Guyana’s 50th Independence Anniversary. He acknowledged that initially the plan was to reinstall the original Independence Arch that was removed in 2004 to facilitate road expansion works, but it could not be found.

With regard to those who question the justification for erecting this new arch, Mr. Patterson said that in addition to delineating the city’s southernmost boundary, “It commemorates the same values that those men and women before us had celebrated: perseverance, hard work and a bright future”. 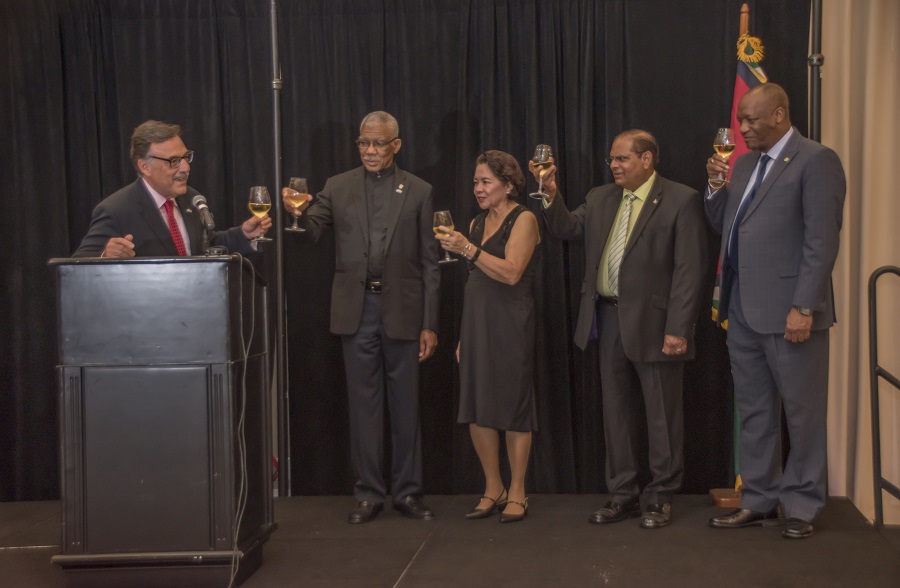 A symbol of nationhood

Meanwhile, Chairman and Managing Director of Banks DIH Limited, Mr. Clifford Reis, said that the unveiling of the jubilee anniversary arch adds to the many arches across the country, which are among the many symbols erected to foster nationalism.

According to Mr. Reis, since the erection of the first arch at La Penitence, fondly called the ‘Ruimveldt Arch’, Banks DIH Limited has always seen itself as the ‘caretaker’ of this national symbol as it was located within its vicinity. Mr. Reis also expressed hope that the jubilee arch will lead to prosperity, new horizons and opportunities and renewal to the nation, particularly the residents of Agricola.

Meanwhile, Minister within the Ministry of Education with responsibility for Culture, Ms. Nicolette Henry, in her address at the ceremony, heaped praise on the partnership between the government and the private sector that lead to the success of this historic unveiling.

“This anniversary is a significant milestone and every citizen should feel a sense of pride. At this time, it is necessary to acknowledge all who have contributed to get us to this point and we must recognise the partnerships between the Government of Guyana and corporate Guyana. We must now focus on the next 50 years and beyond, planning strategically to get where we want to be,” she said.

This, the Minister said, is symbolised by our golden Jubilee logo; the roaring jaguar, our national animal, which captures the strength, power, focus and drive that we would need to harness our talents and abilities and sustainably exploit our natural patrimony to ensure that the good life is attainable by all.

Caribbean’s case for ‘reparative justice’ is righteous; will give our children ‘a better deal’ – President says at CARICOM International Youth Reparations Rally