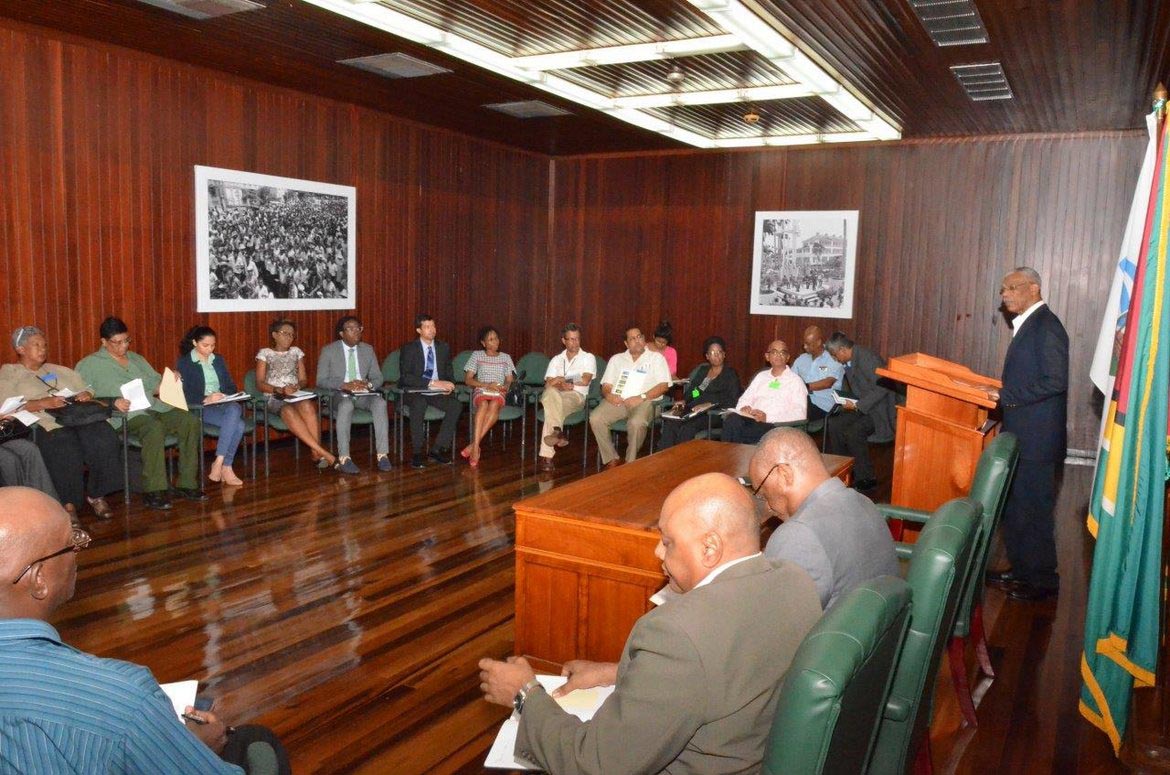 Georgetown, Guyana – (May 18, 2016) President David Granger, today, met with the Heads of the various agencies under the Ministry of Natural Resources, the Ministry of the Presidency and the Ministry of Public Infrastructure, which together have responsibilities for Guyana’s natural resources to assess Guyana’s preparedness for the transition to a ‘green’ economy.

The meeting, which was held at the Ministry of the Presidency, also provided those attending with an opportunity to discuss government’s ‘green’ development agenda and the involvement of these agencies in advancing that agenda towards the eventual goal of a national ‘Green Development Plan for Guyana.’

In addressing the representatives of the various agencies, President Granger said that the environment plays a critical role in the development of any country and it is therefore necessary that Guyana takes steps to ensure that it does not lag behind its counterparts.

“Guyana is not keeping abreast with other States in terms of the mastering of its environment. It seems to me that several other States, even the smaller States had made a lot more progress in their approaches to the environment, particularly in energy generation and this has been a major problem for Guyana. Guyana is the best endowed Caribbean state in terms of potential and other countries are making headway in solar, wind energy generation. They are way ahead of Guyana,” President Granger said.

The Heads were given the opportunity to explain the work and mandate of their respective organisations and outline their challenges.

At the conclusion of the meeting, the President committed to meeting again with the invited agencies and departments with a view to gaining their additional input and in the formulation of a draft Green Development Plan. The meetings will be held during the month of June 2016.

President Granger signed onto the Paris Agreement at the United Nations Headquarters in New York last month, in keeping with the commitment to reducing the adverse effects of climate change. He also participated in the recent US-Caribbean-Central American Energy Summit.

President David Granger addresses the Heads of the various Agencies with responsibility for managing Guyana’s natural resources at a meeting today at the Ministry of the Presidency.

Meanwhile, Minister of Natural Resources, Mr. Trotman, in an invited comment, said that he believes that the timing is right for the meeting since it is important that the policy makers, organisations and technical personnel have an idea of where Guyana is and where it needs to be.

“As we prepare to mark our fiftieth year anniversary as an independent nation, it is obvious that the future of Guyana is going to be grounded in its economy being green and one that is environmentally friendly [and] respectful to the patrimony and the people of Guyana. So it is important that all the different agencies come together…,” Minister Trotman said.

In his remarks, Mr. Gobin, CEO of the Iwokrama Centre said that the meeting is a significant step forward for bringing these agencies together.

“I think it was a very useful meeting for most of the agencies, if not all today. I don’t know that there has ever been a meeting with all of the agencies involved. In fact, I came out with some very useful facts and links to approach and partner with the other agencies so it is a huge step towards a consolidated effort to the environment. We are looking forward to the June meeting where the President will give us a little more on his thoughts and visions for a green economy,” Mr. Gobin said.

In addition, Ms Christian, Head of the Office of Climate Change, said, “I thought that the meeting was very important. It is also timely because it comes as the Government finishes one year in government and secondly, many of the heads of the agencies are relatively new, like myself, and this meeting provided the opportunity for us to know what the other agencies are doing. It also provided an opportunity for us to share how our respective agencies are doing, what are our challenges and how we see our work fitting into the green economy.”

Since his assumption to office on May 16, 2015, President Granger has been advocating for Guyana to transition to a ‘green economy.’ With the growing negative effects of climate change, smaller countries like Guyana and those in the Caribbean are particularly vulnerable and are already dealing with the an increase in the frequency of hurricanes, tropical storms, high tides, droughts and flooding.

Ex-police groups of Canada, US, donate over US$1,700 to President’s ‘Five Bs’ programme