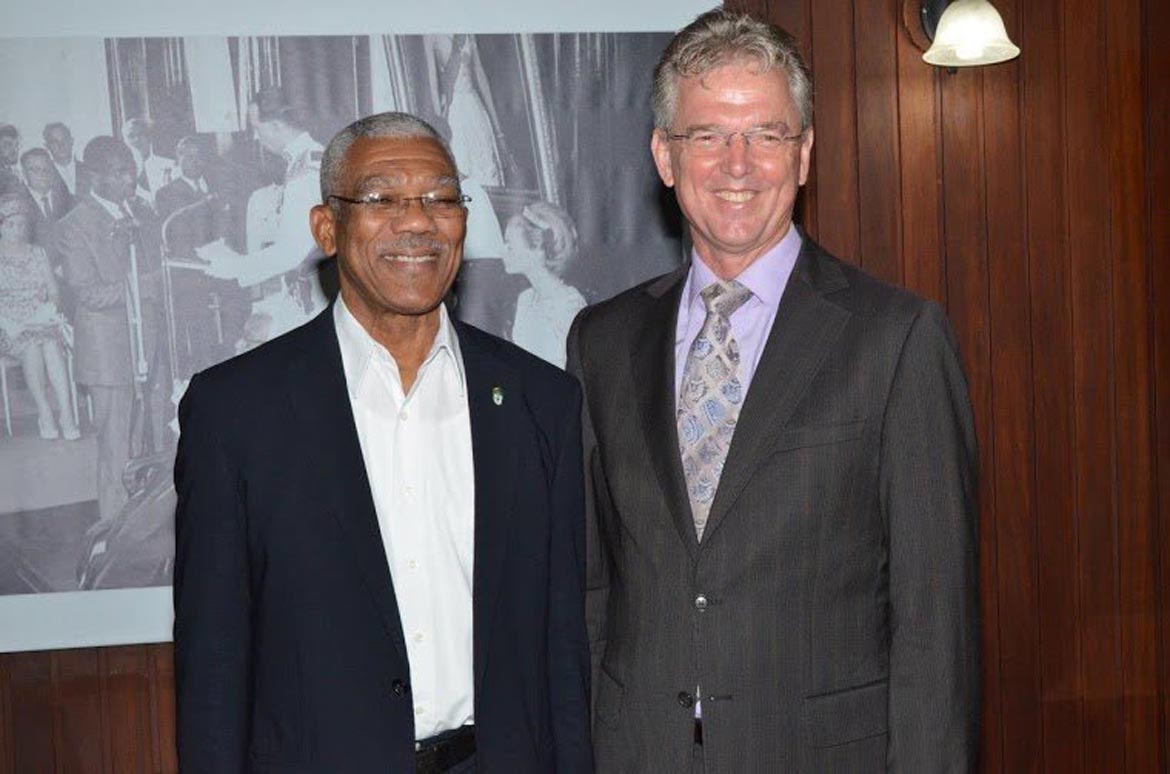 Georgetown, Guyana – (May 19, 2016) Ambassador of The Kingdom of Netherlands in Suriname, Mr. Ernst Noorman, today, singled out Guyana as a “bright star” in the Region, noting that its political stability and current optimistic oil exploration activities make the country a boon to investors.

The Ambassador, who is based at the Embassy of The Kingdom of The Netherlands in Suriname, made these remarks during his first meeting, today, with President David Granger at the Ministry of the Presidency.

In an invited comment, Ambassador Noorman said, “If you look at the neighbouring countries, most of them are in quite difficult economic times and also politically it can be challenging for those countries. In that sense, right now, Guyana is a bright star. It has economic growth, there’s political stability, the prospect for the future with the oil find that means banks will be interested in investing in Guyana…the economic climate is much better than some of the countries in the area.

The Dutch envoy is in Guyana for a week of meetings with several agencies and Ministries, including the Ministry of Public Infrastructure, which has benefited and will continue to benefit from expertise and advice to tackle flooding, especially in Georgetown. During the meeting, several areas of mutual interest were discussed including the Guyana/Venezuela border controversy, the ExxonMobil oil find, climate change, infrastructure and drainage works, the clean-up of Georgetown, Guyana’s push for a ‘green economy’ and the upcoming Golden Jubilee Independence Anniversary celebrations.

President David Granger and Ambassador of The Netherlands in Suriname, Mr. Ernst Noorman

The Ambassador also acknowledged that Guyana and The Netherlands share a strong history and today relations between the two nations cannot get much better than they already are. Ambassador Noorman said that he encourages investors and other persons to consider Guyana when making economic decisions.

“I would say that the relationship is already very good and right now you see a lot of interest from Surinamese companies to come to Guyana… I always tell the Dutch companies that you come to this Region and Suriname and don’t forget Guyana because the economic prospects for Guyana are quite favourable especially after the oil find of course but the economic climate is good,” he said.

On this note, Ambassador Noorman said that the Dutch country will continue to partner and assist Guyana, especially to tackle flooding in and around the country. To this end, a team from Delph University is expected to arrive here in August to help the Ministry of Public Infrastructure to craft a drainage plan for the city so that the areas which need work can be identified.

“We discussed areas of collaboration on various levels such as the assistance we gave to Guyana in the area of flooding and we are still pursuing that to see how we can help Guyana solve its flooding problems especially in Georgetown,” he said.