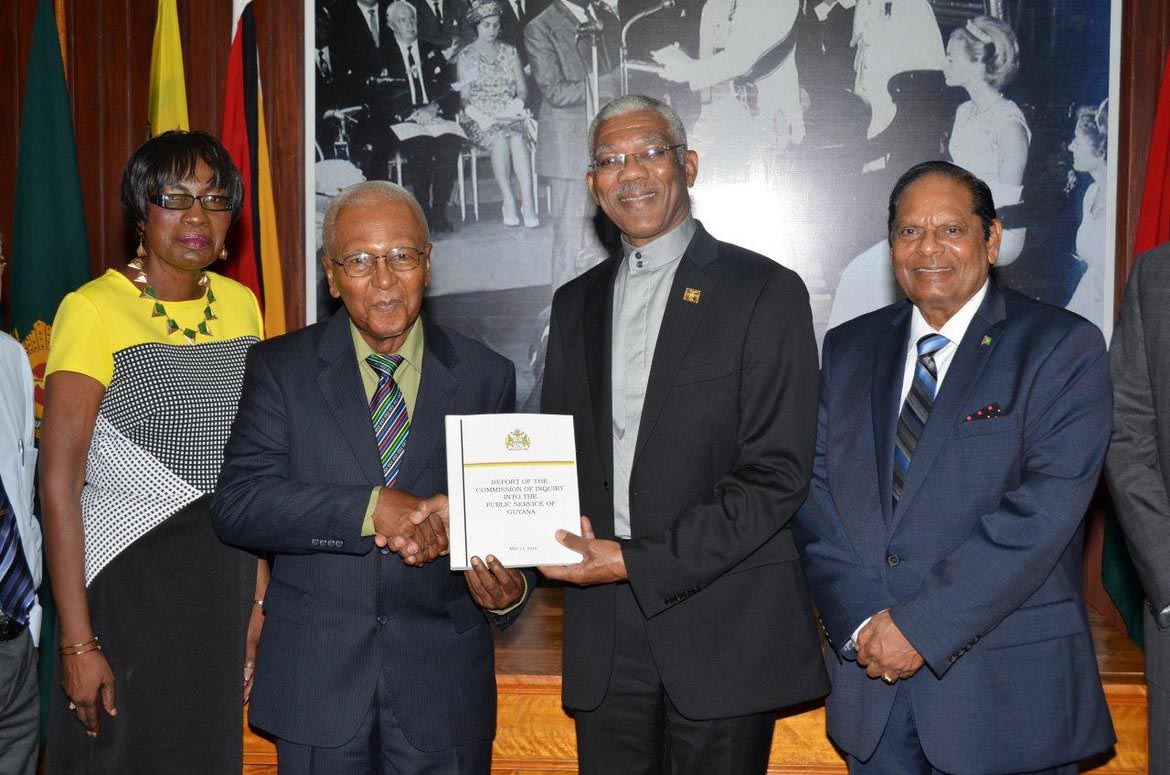 Georgetown, Guyana – (May 13, 2016) President David Granger said that the Public Service must move to a standard where performance and professionalism is commensurate with promotion and remuneration; making it clear that the ‘across the board salary increase’ approach does not foster efficiency. He made these remarks, earlier today, when he received the Public Service Commission of Inquiry report, which he referred to as a landmark study.

“Many people expect [that] there is going to be some bonanza. I hope they will discover that the bonanza will come from their own efforts. The bonanza will come when they work hard and do better than the next person. If they want to be lazy, they will get a lazy person’s remuneration. If they work hard they will be rewarded for their hard work. This is what people in every area of endeavour must learn, that actual output is related to input,” President Granger said.

The President spoke of the three criteria on which public servants should be judged. These are: impartiality/social responsibility, education and experience. He particularly emphasised the need for a cadre of public officers who must, without fail, discharge their duties without fear or favour, affection or ill-will.

“Any concerns about ethnicity, party affiliation, neighbourhood or family should be erased from professional performance,” the Head of State asserted.

He added that the country cannot function without an efficient public service, which he said, is meant to ensure that the State is well governed.

Soon after taking Office, President Granger met with senior public servants at the Arthur Chung Convention Centre (ACCC) where he spoke of his Administration’s plan to ensure that the public service is one that is professional and “unbribable”.

The Commission was appointed in August last year by the President to examine, advise and report on the salaries, conditions of services, training, and other matters pertaining to the improvement of the efficiency of the performance of the public service and the well-being of public servants in the public service. The three-member Commission included Professor Harold Lutchman, chairperson and Commissioners Ms. Sandra Jones and Mr. Samuel Goolsarran.

Professor Lutchman, in a brief comment, spoke highly of his colleague commissioners, whose areas of expertise and qualifications were relevant to the issues, which the Commission was mandated to examine. He also informed that the Commission received support and submissions from a number of persons and organisations both locally and abroad.

The report will be deliberated on at the level of the Cabinet after which it will be presented to the Speaker of the National Assembly to be tabled in the House. It will also be shared with the unions.