“What a life, what a career, what a Guyanese!” -President Granger at renaming of Ogle Airport to Eugene F. Correia International Airport 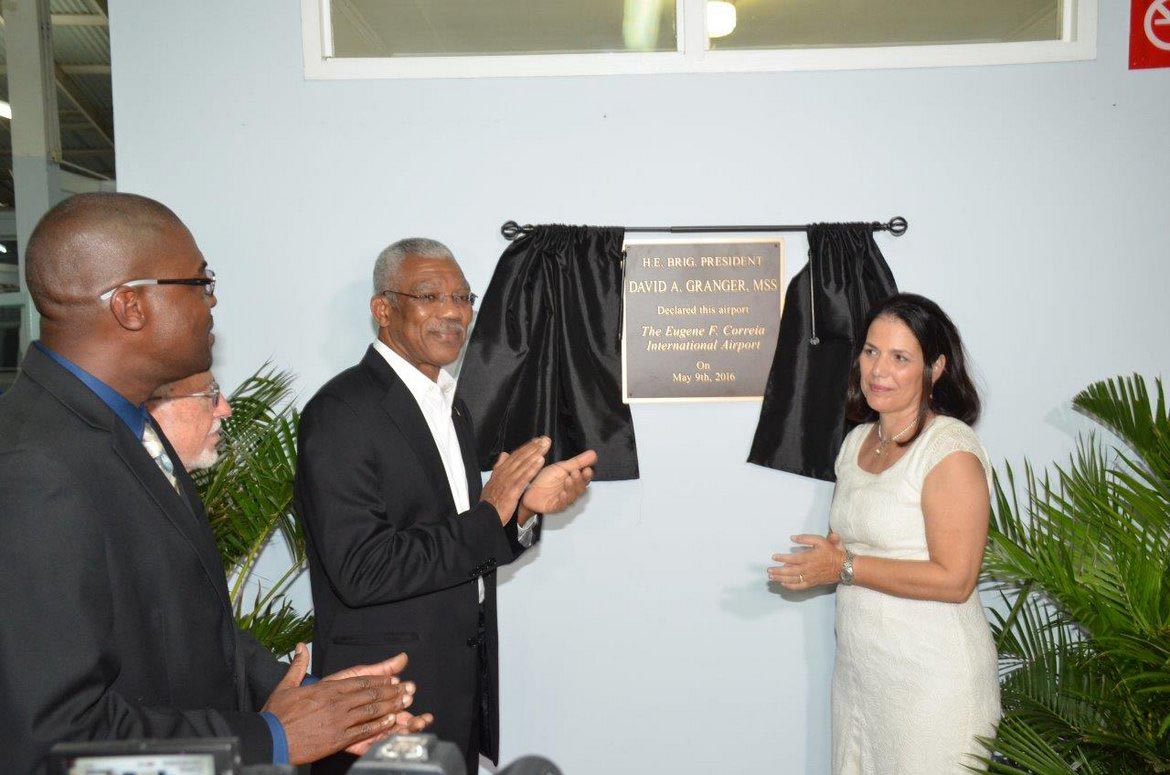 Georgetown, Guyana – (May 9, 2016) The Ogle International Airport was officially renamed the Eugene F. Correia International Airport as a tribute to the sterling contribution of a man, who pioneered the development of the aviation sector and Guyana’s gold and diamond industry. The late Eugene Francis Correia was also a parliamentarian and Minister of Government, who was born in Buxton on August 21, 1899 and died in 1973 at the age of 74.

Speaking at a ceremony at the airport to mark the occasion, President Granger described Correia as insightful and as a visionary and a nationalist, who was a strong advocate of a strong domestic air transport system. A pilot, Correia in 1957 opposed an agreement entered into by the British Guiana Government and the British West Indian Airways (BWIA) for the latter to manage and advise the domestic aviation sector. President Granger quoted Correia as saying to the Legislative Council that, “we have already developed a good domestic service in BG and my opinion is that we should keep it and run it ourselves.”

Correia was appointed Minister of Communications with responsibility for the aviation sector in December, 1964, a post he held until October 1968. He also served as Minister of Works and Hydraulics.

In other aspects of his public life, the late Correia championed the right of Guyanese to be appointed to executive positions in the public service in the then British Guiana.

“This was a time when it was usual for foreigners, particularly, Englishmen to hold the highest offices in the public service. Correia, in an address to in the Legislative Council on November 9, 1956, argued that if Guyanese are capable of filling a vacancy in the public sector then they should be allowed to fill those vacancies,” the President said.

As a visionary, Correia After he became a member of the Legislative Council in 1956, spoke in favour of the then Hydro-Electric Power Bill and predicted that water power would play a major role in developing Guyana. President Granger said that 60 years later that vision and his conviction at the time still ring true.

He also played a significant role in the struggle for Independence. President Granger told the gathering that Correia was a member of the delegation to the Constitutional Conferences held in the United Kingdom in 1962 and 1963 which led to the change of Guyana’s electoral system to that of Proportional Representation in 1964 and, eventually, Independence in 1966.

“What a life, what a career, what a Guyanese! It was with confidence, therefore, that last September, I suggested to the Board of Directors of the Ogle International Airport Incorporated that this airport be renamed the Eugene F. Correia International Airport,” President Granger said.

Meanwhile, Minister of Public Infrastructure, David Patterson under whose responsibility the aviation sector falls, described Correia as a son of the soil of whose record all Guyanese should be proud. He recognised that over the past few weeks there has been some amount of tension regarding the name change and said that while there are merits in the positions put forward by all sides, there is more to the matter than business and politics. 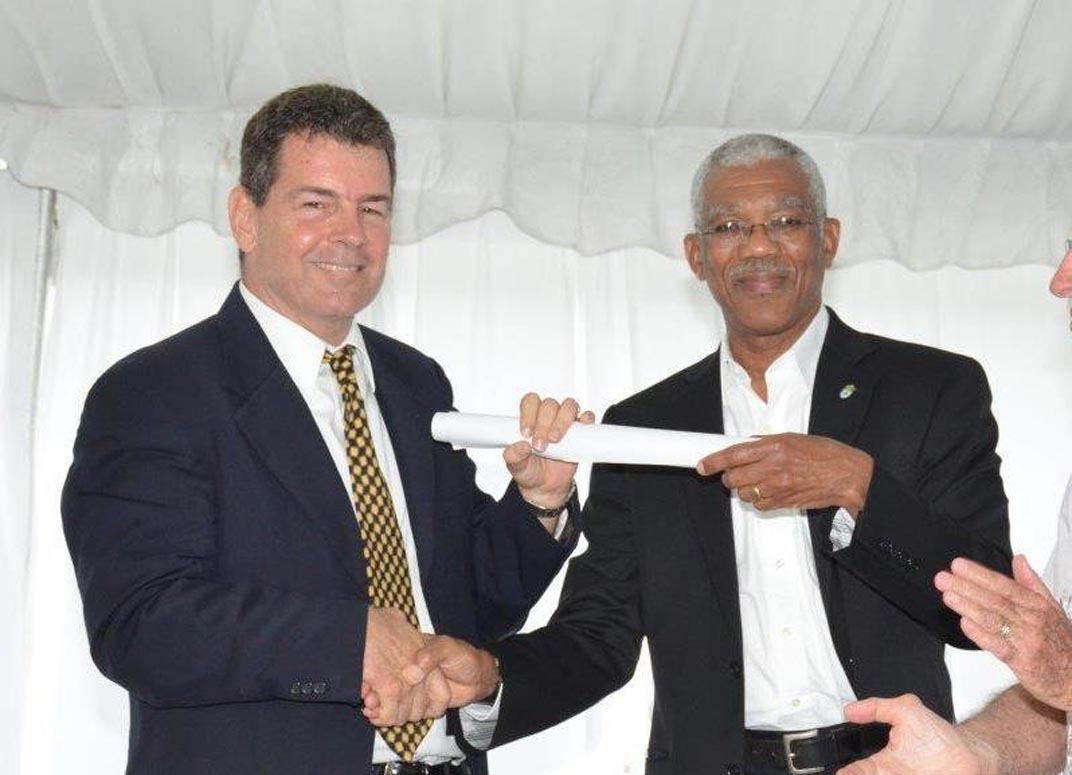 President David Granger handing over a congratulatory parchment signed by the Village Council of Buxton-Friendship in 1965, which details Eugene Correia’s achievements

The Minister informed that currently, there is an independent legal firm conducting a review of various aspects of that airport and said that the concerns raised by several aviators, who operate at Ogle will also be addressed under that review.

“This Government is one that is committed to the improvement in civil aviation and more specifically, we are committed to supporting this airport, whatever the name might be. Furthermore, Government promises that with greater involvement, it can hopefully aid in the standardisation of operational procedures to ensure equal opportunities are available to all involved,” Minister Patterson.

Meanwhile, Chairman of Ogle International Airport (OAI) Board, Michael Correia clarified that contrary to what has been printed in the media, no member of the Correia family requested or even suggested the name change, they are however, honoured to have the facility renamed to honour E. F Correia.

In 1973, Eugene Correia was posthumously awarded the Golden Arrow of Achievement by President Arthur Chung. 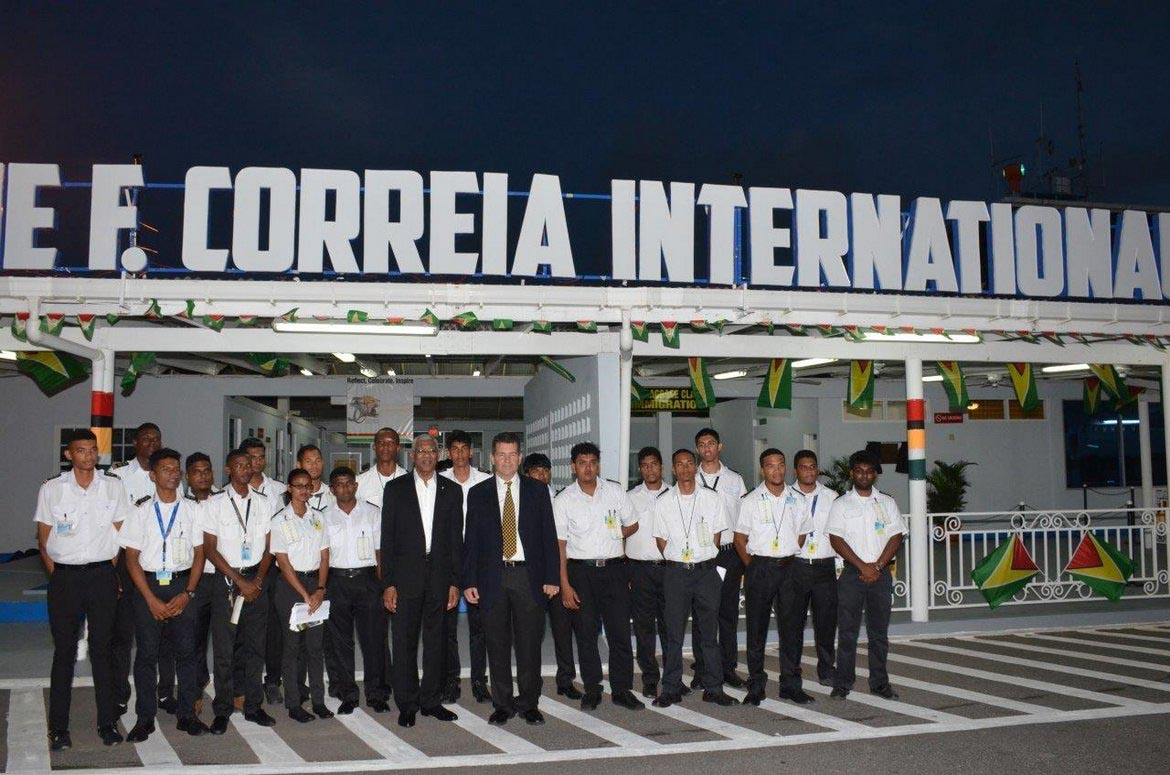 President David Granger with Chairman of Ogle International Airport (OAI) Board, Michael Correia and staff of the Trans Guyana hangar