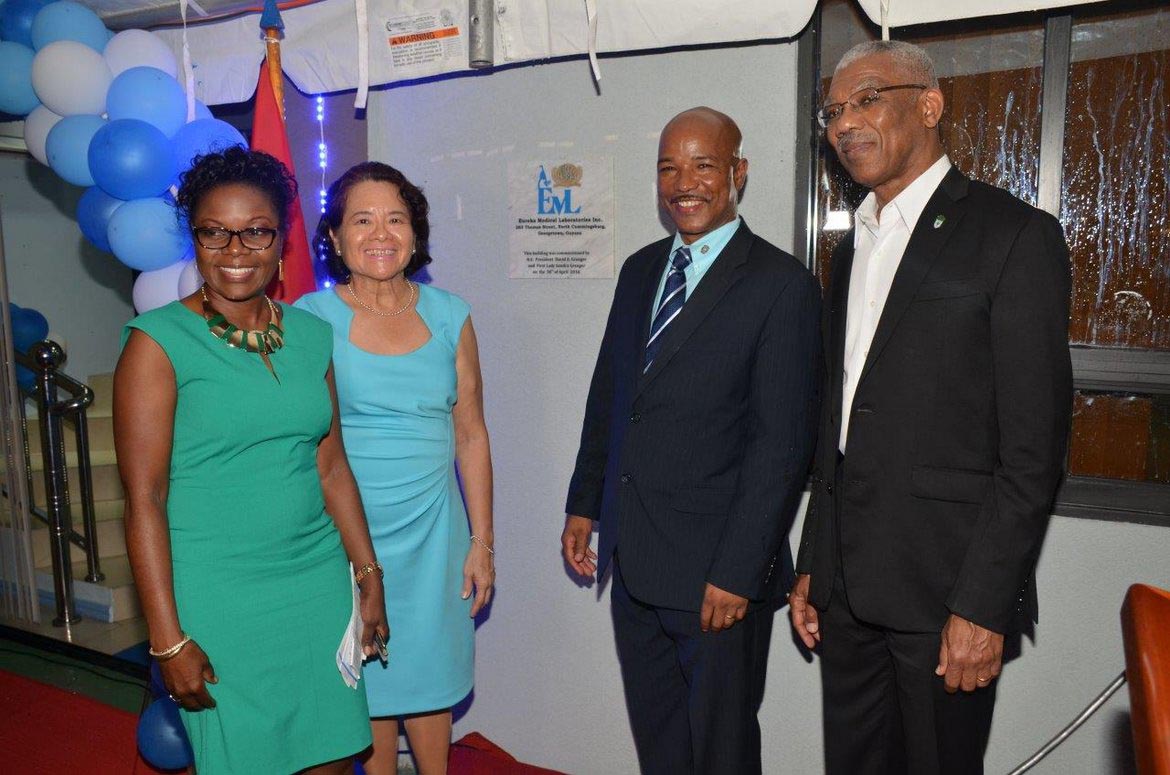 Georgetown, Guyana – (May 1, 2016) President David Granger, last evening, speaking at the launch of the Eureka Medical Laboratories building, which is fully powered by solar energy, said that the private sector has an important role to play in advancing Government’s, and global, efforts to undertake sustainable initiatives in pursuit of a green economy.

“A green economy must be driven by green technologies and this drive is not confined to Government. The private sector, as we see this evening, has an important role to play in introducing green technologies in our country. EML has shown that it is possible to fully power laboratories from solar power and this is the directive I have given to all of our ministries, especially with hospitals across the country. I encourage more businesses, ministries [and] schools to go green… A green economy is a good economy and the path way to the good life,” President Granger said.

The Laboratory, which also introduced its Ancestry and Genealogy DNA Testing service last evening, is seen as an example of what is possible when private companies embrace green technologies. President Granger, outlining the benefits of utilising renewable energy sources, said that every individual, the public and private sector stand to benefit from converting to sustainable technologies.

“The transition to renewable energy would yield considerable savings in foreign exchange in Guyana because it would mean less use of imported fossil fuels… Green technology will open a new commercial sector,” he said.

The Head of State, who has been a champion for green initiatives and initiated the ‘Green Bartica’ project, said that solar power technologies are another source of technology transfers from which Guyana is benefiting in partnerships. The building, he said, is a model, which reflects a green trajectory of energy development.

“Renewable energy sources are an integral part in Guyana’s drive to achieving a green economy. I signed the Paris Agreement last week in New York. Guyana has obligations under this agreement and these include achieving 100 percent of our energy needs from renewable energy… I am confident that Guyana can satisfy all of its energy needs from renewable sources. Radiation levels in Guyana are sufficiently high to promote the development of massive solar farms. EML is leading the way,” the President said.

While he acknowledged that Guyana needs financing and technology to capitalise on the development of green energy and green technologies, the President, who is scheduled to depart Guyana tomorrow for Washington DC to attend the United States Caribbean Central American Energy Summit, said that he intends to use this opportunity to advance that need.

“In a few hours, I will be attending the Energy Summit in Washington DC where I hope to advance discussions on with officials on private sector parties on securing the necessary financing and technologies to help Guyana to tap into the unquestionable renewable energy sources,” he said.

Meanwhile, with regard to the launch of the Ancestry and Genealogy DNA Testing service, President Granger said that it is a ground-breaking moment for Guyana as it is now numbered among several countries that offer this service. The Genealogy test allows a person to find out where there are some people in the world who share the same DNA. The test involves swabbing the client’s cheek to collect a DNA sample. Results for this test are usually ready within 30 days.

“Ancestry testing is a welcome addition to the range of medical laboratory testing services offered to the people of this country. It is a sign of progress in the field of medical services… Ancestry testing will help local professionals to make a more comprehensive analysis of health characteristics and predispositions of their patients. Guyana, thanks to EML now joins the other countries which offer ancestry testing services,” President Granger, who has already provided a sample, said.

Minister of Public Health, Dr. George Norton, remarked that the debut of the solar-powered Laboratory is timely as it coincides with the Ministry’s observation of Medical Laboratory Week. The opening, he said, will ensure that high quality services continue to be made available to the Guyanese public.

“The opening of the new building will allow you to provide services to more Guyanese simultaneously and the importance of efficient laboratory services cannot be overemphasised. It is a major component in health care delivery since it plays a major role in the early detection and diagnosis of diseases,” Dr. Norton said.

Dr. David Singh, who represented the Ministry of Natural Resources, also made brief remarks, praising the initiative while issuing the calls for others in the private sector to follow suit.

Mr. William Andrew Boyle, Founder and Chief Executive Officer of the Eureka Medical Laboratories said that the journey was a long and arduous one but it has borne fruits.

“Competition was fierce as it still is. It was very difficult to break new grounds in an already saturated environment,” he said.

Eureka Medical Laboratories was established in Guyana March 5, 1995 by William Boyle; a microbiologist and his wife, Dr. Karen Gordon-Boyle; a medical doctor. EML has since become one of Guyana’s premier medical institutions. It is internationally certified and has supply stations in Bartica, Linden, Charity, Anna Regina, Rose Hall, Parika, New Amsterdam and St. Vincent and the Grenadines.