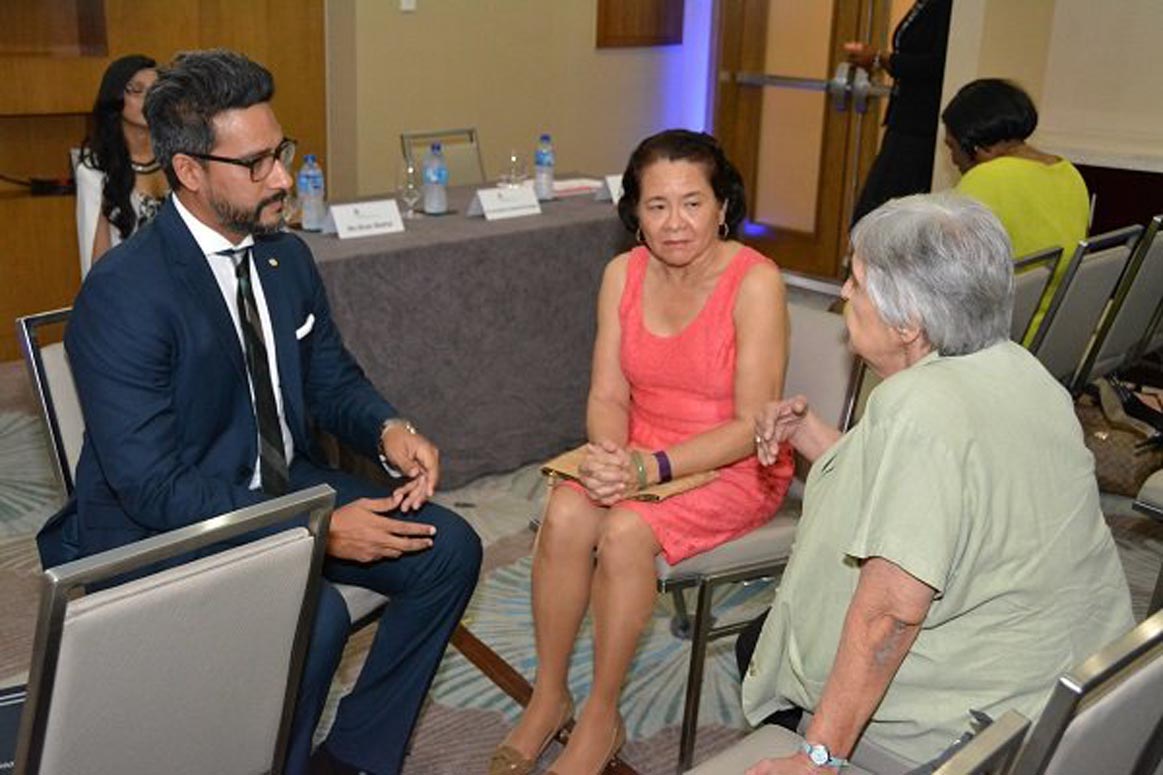 Georgetown, Guyana – (April 29, 2016) First Lady, Mrs. Sandra Granger, this evening, encouraged donors and well-wishers of the Step by Step Foundation to continue to support the initiatives to build a new school for children affected by Autism Spectrum Disorder (ASD) even as $685,000 has been raised during activities held to mark Autism Month.

The First Lady made this appeal in her address at the launch of the building fund for the new Step by Step School, held at the Guyana Marriott Hotel. Minister of Education, Dr Rupert Roopnaraine, Mr. Richard Sammy, Managing Director, General Manager-Credit, Mrs. Parbatie Khan, General Manager – Corporate and Management Services, Ms. Denise Hobbs, Ms. Michelle Johnson, Marketing and Communications Manager, all of Republic Bank, Architect Mr. Kenrick Thomas, who designed the layout for the new school free of cost, representatives of the Foundation and other supporters also attended the event.

First Lady, Mrs. Sandra Granger (centre) and Mr. Richard Sammy, Managing Director pay keen attention to Dr. Suraiya Ismail, Chair of the Step by Step Foundation as she makes a point, during a brief interaction before the start of the reception.

Mrs. Granger recalled that when she was invited to become patron of the Foundation, she agreed without hesitation. She said she is extremely pleased at the support received from individuals and donors alike at the first major awareness and fundraising effort the ‘Light it up blue’ Autism Awareness Walk on April 2, World Autism Awareness Day.

“When we first started our first exercise for autism awareness …I was struck by the fact that there were not only people there, companies were involved, but also some of the kids were there and I think it brought home to some of us who did not have dealings with children with special needs, particularly ASD, that they are people like us,” the First Lady said.

The First Lady announced that the ‘Light it up blue walk’ alone netted $383,000 in proceeds.

“I think it’s our first little step towards the foundation for the school and I am hoping that through corporate and private donations, large or small we will be able to commence the building of the school,” she said.

Mrs. Granger also said she is looking forward to more donations and further collaboration between the Ministry of Education and the school, noting particularly that linkages with the ministry will lead to earlier diagnoses and treatment for children affected by ASD.

In giving a brief update on the Foundation’s progress, Dr. Suraiya Ismail, Chair of the Executive Committee said the new school has a projected cost of $120M. The Foundation hopes to be able to accommodate 50-60 children, to provide training facilities for parents and training opportunities for Education Ministry teachers, among other plans.

The Foundation has grown from five children to seventeen and plans are in train to enrol two more in September. It also now boasts seven tutors and the Ministry of Education has committed to providing teachers as needed.

“Our growth was achieved through the generosity of many, many donors, from the private sector and from individuals too many to name,” Dr. Ismail said, adding that they are “extremely fortunate to have the patronage of the First Lady”.

Meanwhile, in his address, Mr. Richard Sammy, Managing Director of Republic Bank said, “It is my pleasure to acknowledge the widespread enthusiasm and support for this cause.”

The site plan of the new Step by Step School designed by Architect Mr. Kenrick Thomas

Meanwhile, in an invited comment, Ms. Michelle Johnson, Republic Bank’s Marketing and Communications Manager, said staff members upped their support for the Foundation today, donning ‘Light it up blue’ t-shirts, buying them from the Bank, or simply by wearing blue to the office today.

Several made cash and other donations to the Foundation, almost doubling the initial sum raised from $383,000 to $685,000. She encouraged other companies and individuals to continue to support the Foundation’s efforts to build the new school.

Finance Minister participating in ‘Governance for Growth with Equity’ forum