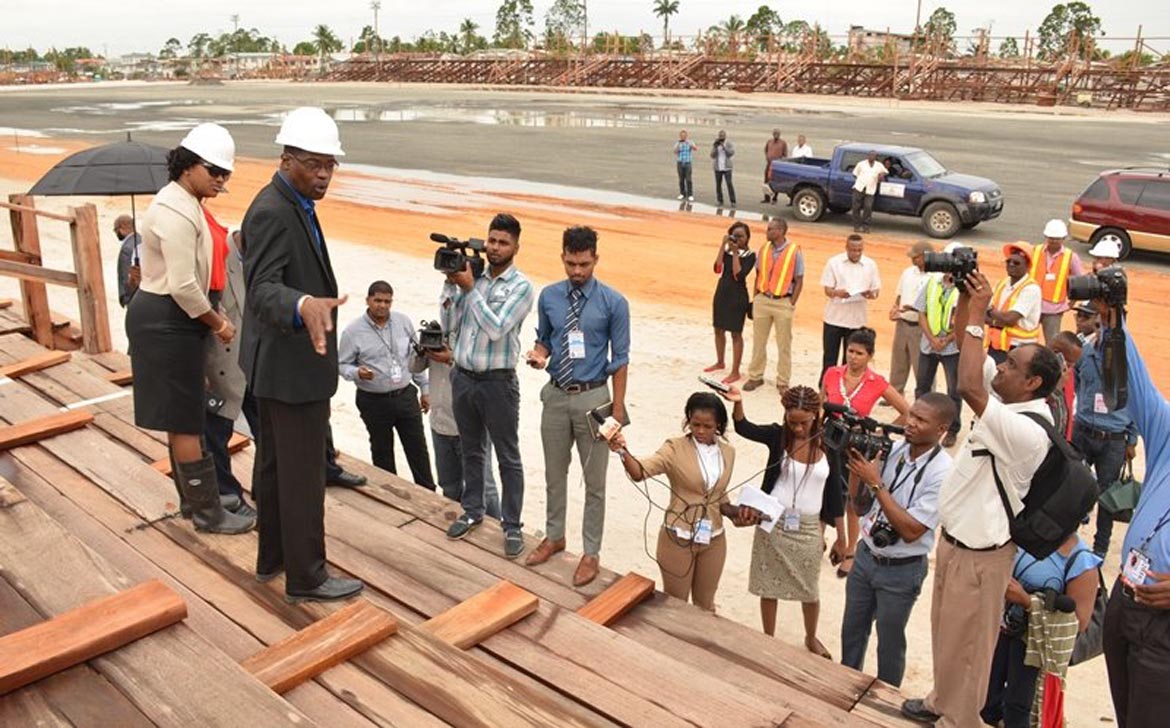 Georgetown, Guyana – (April 21, 2016) Minister of Public Infrastructure, Mr. David Patterson, this morning, said that the outstanding works at the D’urban Park Development Project site will be completed by May 12, in time for Guyana’s fiftieth anniversary celebrations.

The Minister announced this deadline at a press conference he hosted at the Ministry of the Presidency to inform the media about the plans for the completion of the facility going forward. Minister Patterson said that the Ministry of Public Infrastructure has been mandated to take over the project since it has the capacity, expertise and resources to ensure that it is ready for the hosting of the golden jubilee anniversary celebrations.

“The administration has previously worked a model, which would have been for the opening of the Arch and the Inauguration, which was a Private-Public Partnership and we continued with that model for the D’urban Park development. However, there are some constraints in that; the primary one being the mobilisation of resources et cetera. It is a national project. It is for the nation. The jubilee celebration is not a singular activity. It is an activity, which will be celebrated by all Guyanese and at this stage, because of time constraints and mobilisation of equipment and resources, it was felt that it [would] be better handled now under the Ministry [of Public Infrastructure], which has the resources to so do,” Minister Patterson said.

President David Granger, on this week’s edition of “The Public Interest”, which will be aired on Friday evening, echoed similar sentiments and noted that the lack of provision for the Park in the 2015 National Budget, coupled with the delay in the passing of the 2016 Budget had resulted in the Park not being funded by the Government.

However, the President noted that the project is now a national one and full responsibility has been handed over to the Ministry of Public Infrastructure.

“At this point in time, the D’urban Park is a national project and it is a national priority and it is my considered opinion that the national government should be more involved. We have thanked the corporate community for their assistance in bringing the project to where it is now and we can take it from here. Minister Patterson is confident that he will be able to bring up the facility to acceptable international standards in the coming months. It is late, but it is not too late,” the President said.

While he acknowledged that that deadline is fast approaching, Minister Patterson said he has full confidence in his team’s ability to complete the work.

“As you know it will be a push because there are two things; a fear of the rains and floods, and we have somewhat tackled that, and then there are some issues in the media of safety and so, but all of that will be addressed in time for the jubilee celebrations. We have examined the site and we have met all the persons so that there is an orderly handover and we have developed a plan,” the Minister said.

Funding
With regard to funding, the Minister said that a grant is actively being pursued. In the meantime, however, funding to the tune of $150M has been approved by Cabinet under the Infrastructural Development Line Item for the Ministry of Public Infrastructure.

“The funding in the initial stage is under a Line Item at our Ministry, which is for Infrastructural Development that can be used. There are alternatives including, but has not [yet] been concluded, a grant funding, which has been earmarked for such development. Cabinet has made available the sum under this Line Item and I can expend as much as $150M. However at this initial stage, we do have to get this finished before so there won’t be need for any Contingency. The Grant funding can be used to fund the remainder of the works,” the Minister said.

Outstanding work and repairs
As it is, the Minister has asked the previous developers for an inventory of the Development Project so that the full needs can be determined. However, the scope of outstanding work includes the roofing and remedial works for the spectator bleachers, completion of the superstructure, walls and roof for the VIP stand, electrical wiring, lighting and power supply, completion of access driveways and bridges, sanitary facilities and drainage works.

The completion of the bleachers would include the replacement of damaged members (beams, columns, decking), the installation of additional structural members and the installation of roof and guttering. There are 27 stands and it is expected that four contractors will be asked to work on these and to pull double shifts so that the deadline can be met.

In this regard, Minister Patterson said that the contractors, who were prequalified by the Ministry earlier this year, during the opening of bids for infrastructural works, will be asked to make submissions in keeping with the rules and regulations of the National Tender and Procurement Board.

“We usually prequalify contractors at the beginning of the year so we would have had a list. We would have selected 13-15 contractors and then ask them to submit… they have to show that they [can] fulfil these requirements; that they have the capacity, the manpower and financial capabilities because we are working double shifts so that would mean a double wage bill at the end of the week,” he said.

The Ministry of Communities in collaboration with the Mayor and Council of the City of Georgetown will ensure that the cleaning and clearing of the drainage systems are done.
Representatives from the media fraternity were treated to a full tour of the facility, during which the Minister answered questions which they posed.