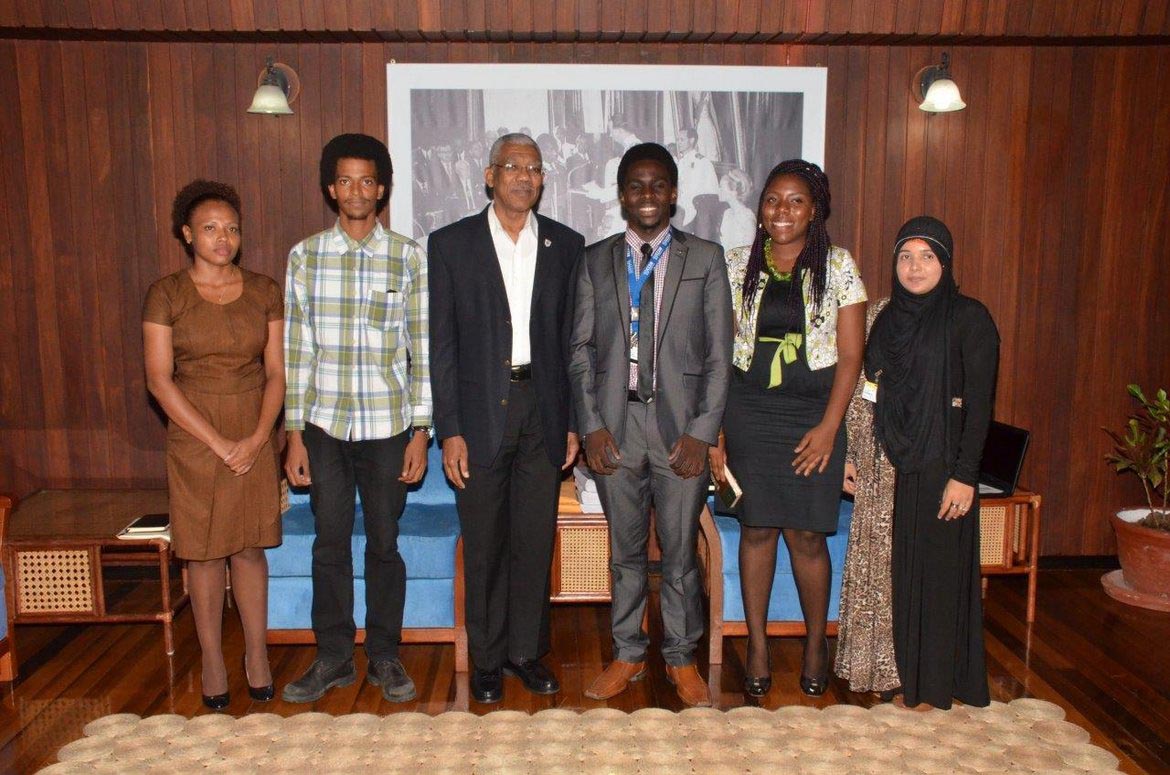 Georgetown, Guyana – (April 14, 2016) President David Granger, today, dealt with some matters raised by the executive members of the University of Guyana Students’ Society (UGSS) and pledged to continue to address students’ ongoing concerns, during a meeting at the Ministry of the Presidency.

“By the time the next academic year starts most of these problems will be dealt with. Of course, not completely, but we would like to have some of these problems rectified. So we will try to rectify these before next semester and when the Minister of Finance is back in the country I would like to engage him and it will be in the presence of the Vice Chancellor and the Chancellor, if he is still here, and the Minister of Education. This is a grave situation and I would never try to sweep this under the carpet,” President Granger said.

During the almost two-hour long meeting, the President allowed the students, who were led by outgoing President of the UGSS, Mr. Joshua Griffith and incoming President, Mr. Ron Glasgow, to share their concerns and make their presentations.

Among the issues raised was the lack of lecturers, lack of furniture in the classrooms, the presence of animals on campus, lack of recreational facilities, absence of practical assessments and functioning and equipped laboratories for first and second year students, what are considered unhelpful policies of the University and the perception of lack of respect and regard for the welfare of students by the University’s administration.

President Granger, who has always been a firm advocate for education, said that the meeting was “sobering” adding that while he was aware and had been disturbed about the diminishing conditions at the University for several years, he had never expected that it would reach to such low levels. “What you have described here, which I do not doubt… is very grim. The standards of sanitation and even the infrastructure are unacceptably low,” he told the students.

The President noted that he envisions graduates from the University of Guyana participating in every sphere of the country’s development and as such, the challenges there must be remedied as its current described state is hardly conducive to a tertiary learning institution.

“I have emphasised the importance of science and I would certainly like to see more scientists coming out of the University, more engineers to build our highways and bridges and roads in the hinterland, more biologists, more chemists and more botanists. This country cannot develop without an efficient University of Guyana so that is my vision. My vision for the University is inseparable from my vision of the country… I will certainly work on this. I have already engaged the Chancellor and the Vice Chancellor. I will work with the Ministry of Finance and the Ministry of Education to bring relief,” he said.

With regard to reports of challenges in the relationship between the University’s administration and the students, the Head of State opined that the Chancellor and Vice Chancellor of the University should address those issues.

“As far as the number one problem is concerned, that is for the Chancellor and Vice Chancellor and they must at least listen to you and maybe in so doing, be better prepared to address your needs,” he told the students.

Meanwhile, Mr. Griffith, in an invited comment, said that the discussion was frank and open and focused mainly on the issues that have been affecting students at the campus. He noted that the commitment given by the President was heartening.

“We got the general sense that the President was surprised at the realities on the ground and he did commit to ensure resolutions in the near future for almost everything we brought to the fore. So there is some sense that things will be different very soon,” Mr. Griffith said.

He noted that the UGSS was appreciative of the engagement with the President even while he acknowledged that there is work to be done by the students themselves.

“The President was very much accommodating, him being alumni of the University of Guyana and we did share wholeheartedly. He outlined the plan forward with regards to engaging ministers and engaging the administration. We did set some timelines and so what we have to do now… we also have some homework. So we need to get the work done on our end so that we can work together to develop our University of Guyana [to] best serve the interests of the Guyanese, the students and all other stakeholders and that is what we intend to do,” he said.