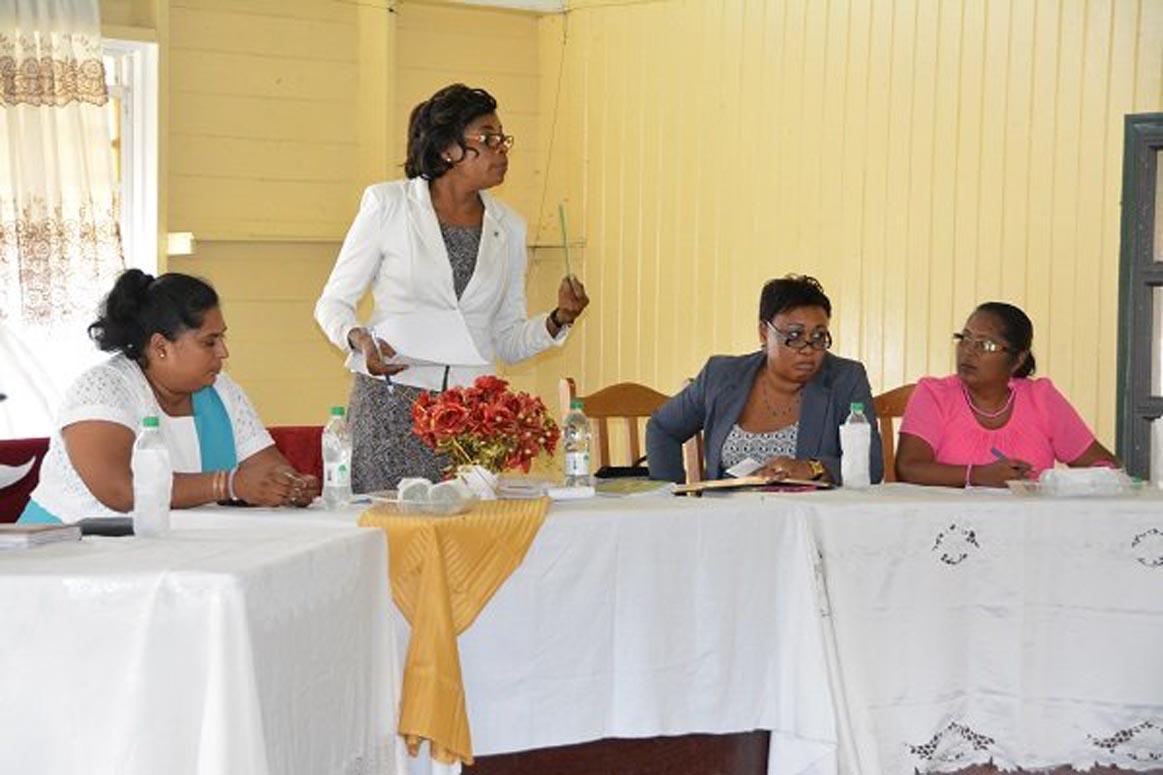 Georgetown, Guyana – (April 13, 2016) The Ministry of Social Cohesion in collaboration with the Education Ministry has embarked on a series of ‘Face the Community’ engagements, which are designed to allow the grassroots, particularly parents, teachers and members of social groups to highlight their concerns while at the same time discussing their roles in creating cohesive communities. The first meeting was held in Region Six at the Leeds Primary School at No.51 Village, Corentyne.

Programme Coordinator in the Ministry of Social Cohesion, Ms. Sharon Patterson urged persons associated with the Parent Teachers’ Associations (PTAs) and other community groups to start exploring ways through which they can use their influence as a collective to effect positive changes with regard to fostering social cohesion.

She explained that social groups, programme and policies are already tangible expressions of social cohesion because they demonstrate the willingness of people to cooperate and work towards common goals.

The Guyanese society is characterised by diversity; people are often divided by ethnicity, religious beliefs, social strata, political persuasion, age, and geographic location. It is against this background that the Social Cohesion Ministry was established and given the mandate to bring people together, regardless of these differences, in the interest of nation building.

“If we fail to work together as a nation and to strive to bring about cohesion and togetherness Guyana would experience policies and legislation that do not consider all Guyanese. This means only a few people will make decisions and it will be to their benefit and not to the benefit of all of us,” Ms. Patterson said.

Another key area that social cohesion seeks to address is that of equality. Ms. Patterson explained that the absence of social cohesion in society will result in discrimination, intolerance and lack of respect for human rights and basic social services such as education. It is for this reason that the Social Cohesion Ministry has been playing a pivotal role in the ‘five Bs’ – Boats, Buses and Bicycles plus Breakfast and Books- initiative.

“Guyana would grow and develop into a harmonious society if we encourage and endorse social cohesion…we cannot undo the problems of the past, but we have the opportunity to change the future. That is what social cohesion is all about. If we embrace social cohesion we will raise generations after generations of people who are zealous about our future and about the development of our country, instead of young people who are bitter with people they didn’t even know because often it is the older persons who say things to the young that cause them to grow up with prejudices,” Ms. Patterson said.

The Ministry of Social Cohesion has set up an inter-Ministerial committee in which the Education Ministry has an active role. This body will look at opportunities through which all stakeholders at the community level can benefit from training in the areas of conflict resolution, healing and reconciliation and other peace-building initiatives.

The next meeting will be held today at the West Ruimveldt and on Thursday at Tapakuma Lake, Region Two.

Advisory Council on the Prerogative of Mercy sworn in – President asks for compassion, mercy to be guiding principles