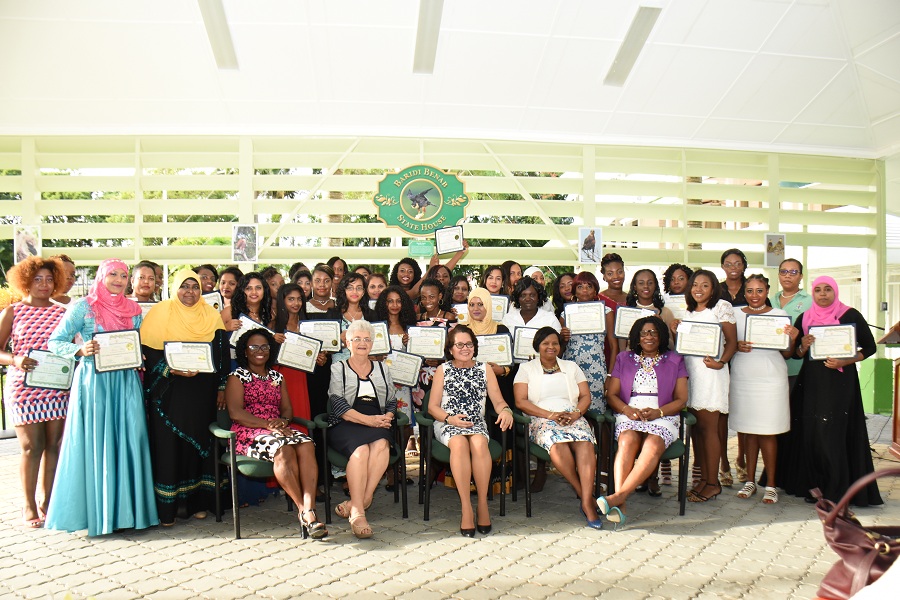 Scattered showers did not dampen the spirits of the competitors who gamely socialised during the light rain, then quickly got back into the heat of the competition for the Best Hat in six categories of competition: elegant, original and topical/comical in both the adult and children’s classes.

Mrs. Granger presented prizes to the winners and handed out special prizes to over 90 years old competitors.

In the adult category, the winners in the elegant class are Ms. Wendy Yansen with her hat depicting ‘Natural Beauty’, Ms. Monica Miggins with ‘From trash to treasure’ and the third place finisher is Ms. Cicely Harding with ‘Feather Delight’. In the topical category: Ms. Debbie Surujdeo-Sukha won with ‘Appreciating Mother Nature’, followed by Ms. Vipree Wills with ‘Hot jubilee’ and Ms. Isha Husain-Singh with ‘Our Heritage’. In the original category the winners are Ms. Kimberly Manbodh with ‘Golden Roar’, Mr. Jeff Wendland with ‘Rainy Season’ and Ms. Roxana Prescott with ‘Lily’.

In the children’s category the winners in the elegant class are Ms. Romeaka Edwards with ‘Dawning of a New Era’, followed by Ms. Carlaysia Welch with ‘Flowery Garden’ and Ms. Shellon Corlette with ‘Fantasy in Gold’. In the original category: Ms. Delisa Blair came first with ‘It’s all about the flag’ followed by Ms. Khadija Mohamed with ‘Tydie Hatarama’ and Ms. Fantasia Haynes with ‘Disney Junior Friends’. In the topical category Ms. Samacia Baptiste came first with ‘Easter Garden’ a followed by Ms. Emilly Chan with ‘Duckie Festival Land’ and Ms. Riena Tom with ‘Bunny Surprise’.

Ninety-three-year-old Ms. Shelia King, who designed her hat ‘Life is but a game of chance’ and ninety-four-year-old Ms. Cicely Harding whose hat depicted an ‘Easter Affair’, both stole the show with their vivaciousness. Several students from the Ptolemy Reid Rehabilitation Centre also participated in the competition.
The programme was co-ordinated by Ms. Desiree Wyles-Ogle. The welcome address was made by club president Ms. Mitzy Campbell and Mr. Russell Lancaster served as the MC.

Musical accompaniment was provided by the Guyana Police Force Band, who thrilled the gathering with their rendition of ‘The Easter Parade’. 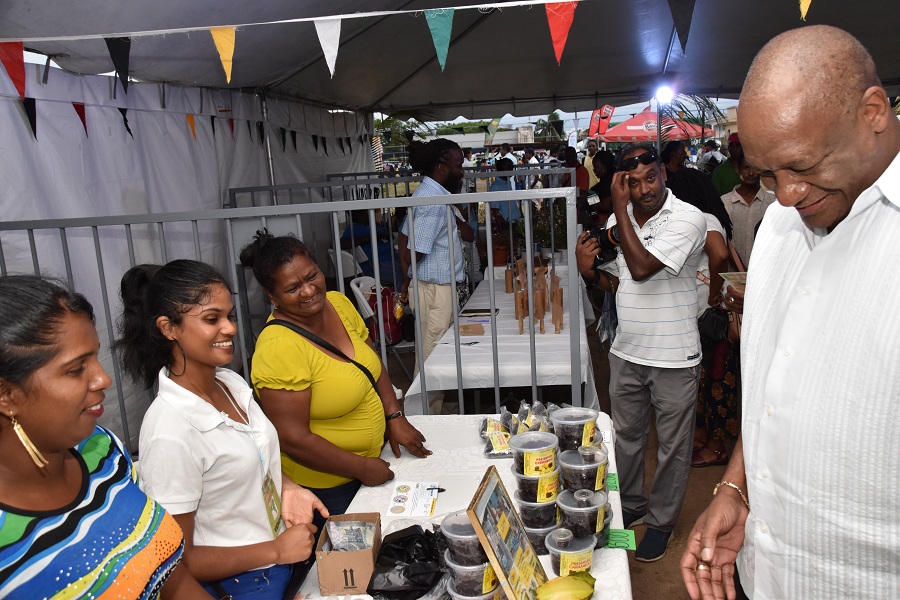 Shy Ms. Carlaysia Welch draws even closer to First Lady, Mrs. Sandra Granger after she places a reassuring arm on her shoulder.