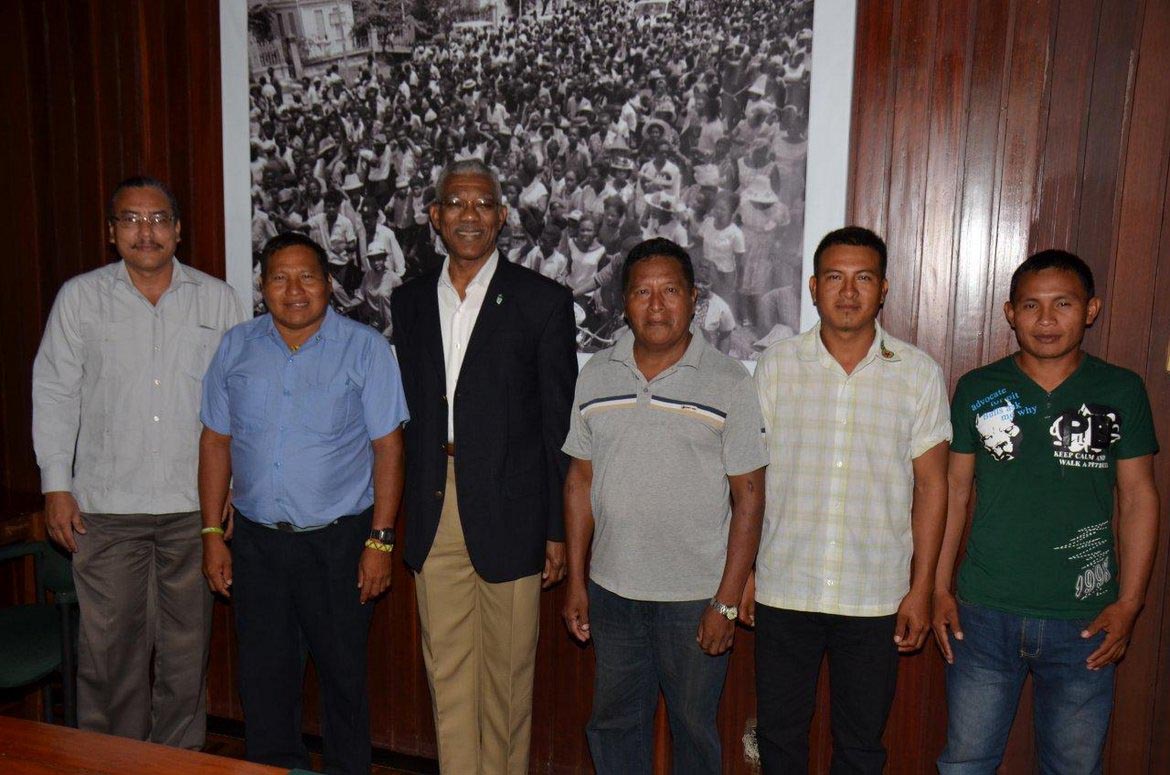 Georgetown, Guyana – (March 14, 2016) President David Granger, today, agreed to commission a team to travel to Masakenari and Parabara villages, Upper Takutu-Upper Essequibo (Region Nine) to meet the people to determine how best to address the problems affecting their livelihoods.

The President made this commitment after Mr. Paul Chekema and Mr. Ekufa Mewsa, Toshaos of Masakenari and Parabara villages, respectively, raised a number of concerns, during a meeting at the Ministry of the Presidency. The Head of State said that he will immediately take steps to have them examined.

“I did not know about these issues, but certainly there are some that we can fix. I want to help because I know it is a difficult area. I understand your situation. I am the President of all of Guyana, so we will see what can be done,” President Granger said.

The Toshaos, led by Mr. Chekema, and accompanied by Ministerial Advisor to the Minister of Indigenous Peoples’ Affairs, Mr. Mervyn Williams, said that the condition of the path leading into the village, the drought, Information and Communication Technology (ICT) services and concerns over mining practices at Marudi, were among some of the pressing matters affecting residents.

Mr. Chekema said that the path leading to the two villages has been in a deplorable state for quite some time. He noted that the Toshaos had approached the previous administration, which had promised to help, but no aid had been forthcoming. As such, they hoped that the new administration could remedy the situation and bring relief to the residents.

“That road is very important to all of the Amerindians. We have to travel far, far, almost two weeks to reach Georgetown, so because of that we came to talk to the President to know whether it is possible for us to get that,” he said.

The Toshao also said that given the location of the village, it is often difficult for health supplies and medication to reach the residents and they are hindered from transporting their agricultural produce from out of the community. He also noted that while wells have been dug in the community, they are insufficient to meet the residents’ needs, as such; the group is seeking the Government’s assistance to dig another well.

At the close of the meeting, President Granger agreed to commission a team comprising representatives from the Ministry of Agriculture, Ministry of Public Infrastructure, E-Governance Unit, Ministry of Indigenous Peoples’ Affairs, Ministry of Public Health and other relevant ministries and agencies to visit the villages and to meet the people, leaders and councillors to determine how Government can assist.

The President also thanked the group for their efforts in rebuilding the Umana Yana, which went up in flames in 2014. He noted that it is a landmark for every Guyanese and the nation remains grateful for the work being done.