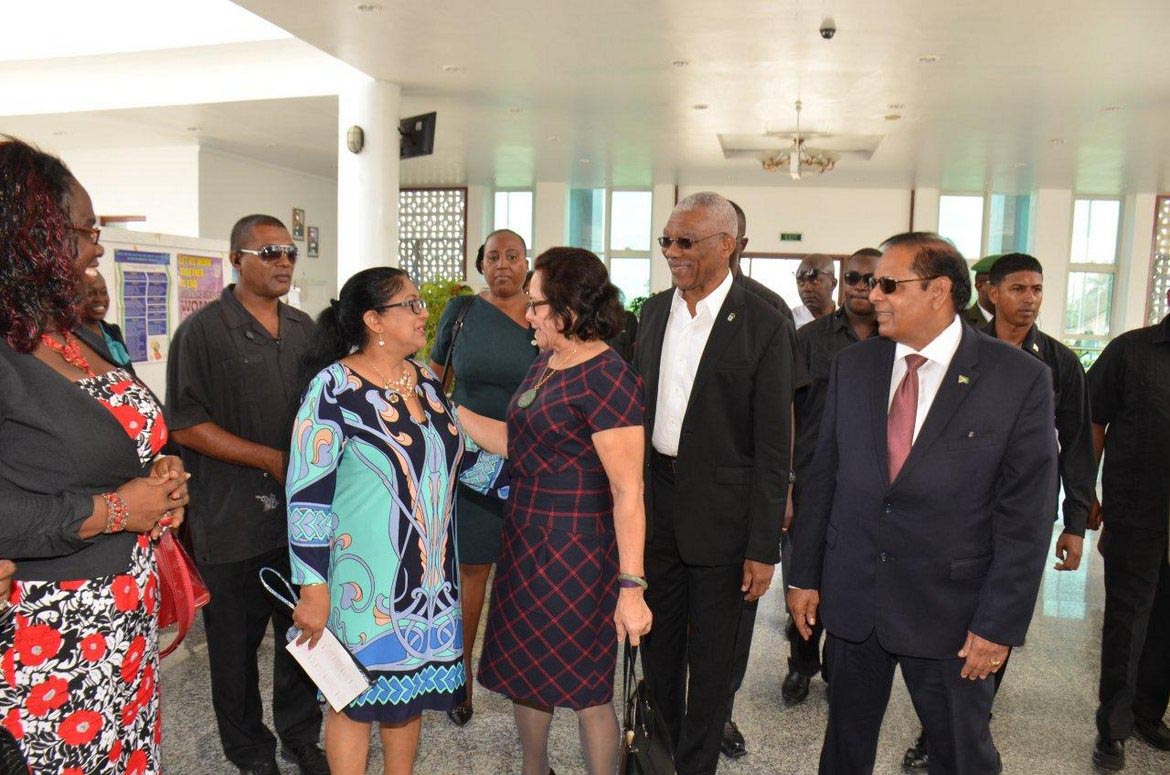 Georgetown, Guyana – (March 08, 2016) President David Granger, this morning, pledged his Government’s commitment to ensuring that the laws and legislations in place to effect gender equality are strictly enforced, and to take action to ensure that Guyanese women are further empowered.

The President made this commitment during his address to celebrate International Women’s Day 2016, at a forum held to mark the occasion at the Arthur Chung Convention Centre (ACCC). The event was held under the auspices of the Ministry of Social Protection.

The United Nations observes International Women’s Day on March 8 every year. This year’s theme “Planet 50:50 by 2030: Step it up for Gender Equality”, aims to ensure that the 2030 Agenda, which places women’s empowerment at the heart of global Sustainable Development Goals (SDGs) is achieved.

Addressing a rapt audience, which included First Lady, Mrs. Sandra Granger, Prime Minister Moses Nagamootoo and his wife, Mrs. Sita Nagamootoo, Cabinet and other ministers and members of the diplomatic corps, President Granger noted that while Guyana has made significant strides, in recent times, by passing laws relating to women and gender equality, these have not been fully enforced and as such, the majority of stipulations are not followed.

“In Guyana … the legislative architecture on gender equality is intact. What is not intact however, is the attitudinal and behavioural approach to equality. Even though there has been progress in the past decades, there is still much more work to be done if we are to certainly affirm women’s rights,” President Granger said.

He asserted that women’s issues and gender parity are among his Administration’s priority agenda and steps will be taken to ensure that these legislations are fully implemented. 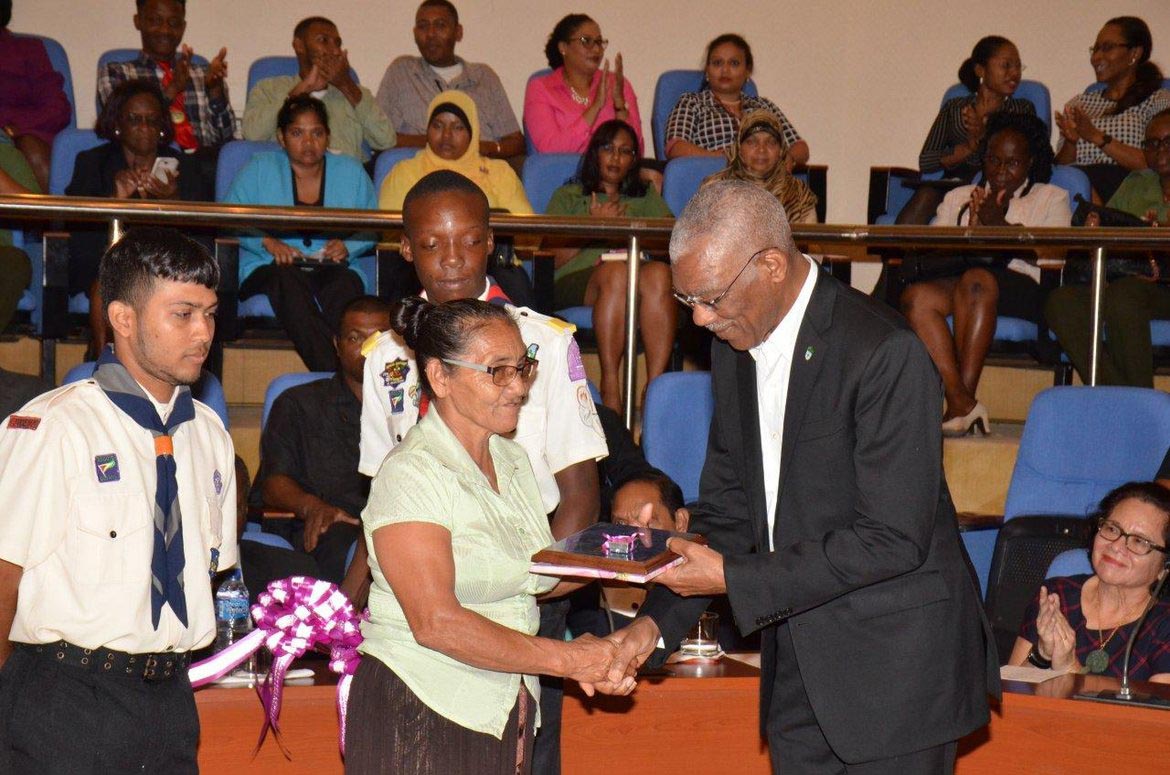 Ms. Elizabeth Romascindo, who hails from Barima-Waini (Region One), receives her award from President Granger. During the presentation, President Granger also extended condolences to her on the recent death of her daughter Ms. Alisha Romascindo in an accident on the Moruca River.

“What we need now is the operationalising of all of these laws and conventions and that is where we come in…The legal architecture cannot be faulted, we can make changes here and there, but what we need in addition to the adhesion to these conventions is an attempt on our part, as citizens, to put into practice what we have passed into law. We must therefore, move from the enactment of laws to the enforcement of laws and change in attitudes,” the President said.

Guyana must move into the realm of performance and tackle the task of breaking down barriers, which prevent women from being treated as equal to men. “We must address the structural causes of gender equality, we must honour our commitment to these conventions…Guyana reasserts its total commitment to achieving the 17 Sustainable Development Goals. These include Goal No. 5 which intends to: “Achieve gender equality and empower all women and girls”,” the President said.

The Head of State recalled that last year, at the United Nations Global Leaders’ Meeting on Gender Equality and Women’s Empowerment, held at the United Nations Headquarters, he reaffirmed Guyana’s commitment “to build a country in which women and girls can expect to live in safety, to be protected from abuse, such as trafficking in persons, domestic violence and workplace hazards.”

Guyana intends to honour this commitment, he told the gathering. “Our ability to do this depends on our ability to dismantle the structures which oppress and marginalize women. These structures include a societal culture that is biased against women. The task ahead for us is to begin to remove structural impediments; impediments to greater gender equality and parity. Guyana is proud of its record in promoting and protecting the rights and enabling the equality of women,” the President said, though he cautioned that “We still have a far way to go. We can be satisfied, however, that some considerable effort has been made over the past 40 years… We pledge to work, assiduously, at the local, regional, national and international levels to achieve this objective over the next 14 years.” 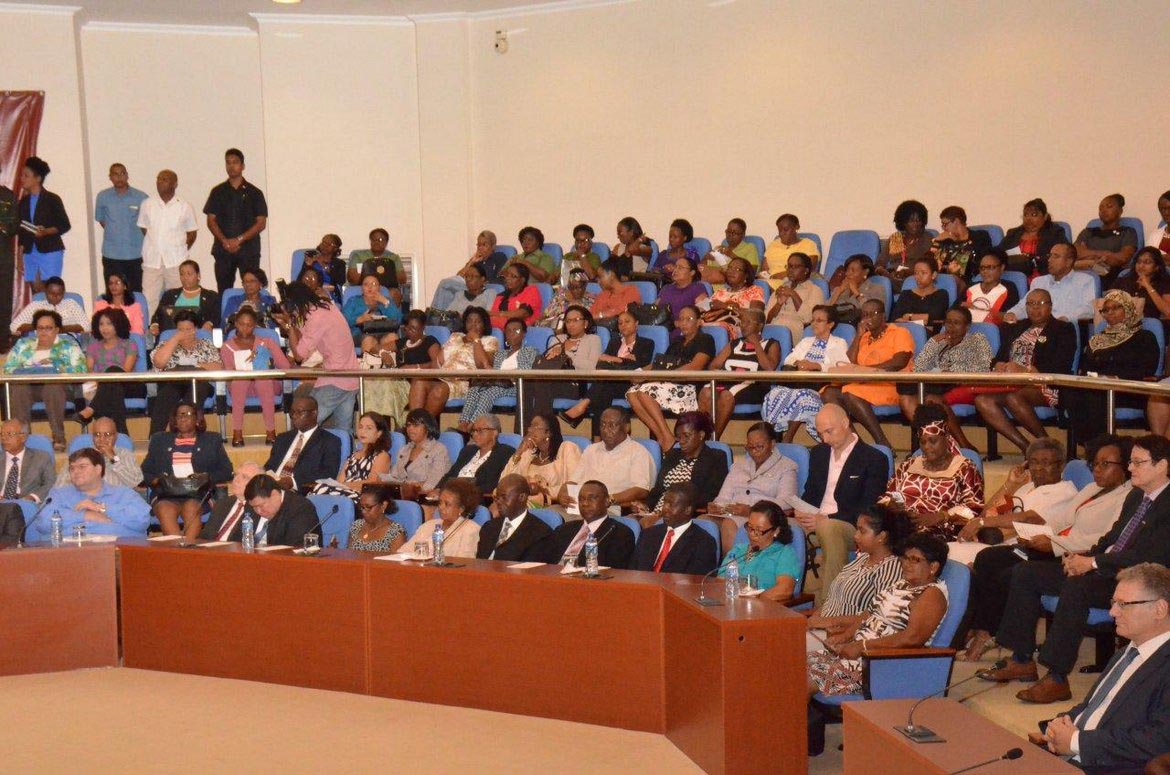 Some of the attendees at the forum held to celebrate International Women’s Day 2016, at the Arthur Chung Convention Centre.

To start the process it is imperative that emphasis be placed on education. Once this is done, employment, equality and empowerment will follow, he said.

“Gender equality can be achieved by ensuring unimpeded access to education. Education will unlock opportunities for women and give them a better chance of graduating more rapidly to the upper echelons of many of the professions in which they are presently grossly unrepresented. The surest and quickest means of enhancing the status of women and providing them with greater opportunities for upward mobility is through education. It will help them to compete on a level playing field with men – one measured by performance – and to demonstrate that they can match whatever men can do,” the President said.

To this end, he noted that he has instructed that girls must be given priority on any bus or boat or bicycle that has been donated by his Government under the ‘Five Bs’ programme. “The girls must get to school and must be given priority. If we allow young girls to complete their education they will make decisions, which will not impeded their careers,” he noted. 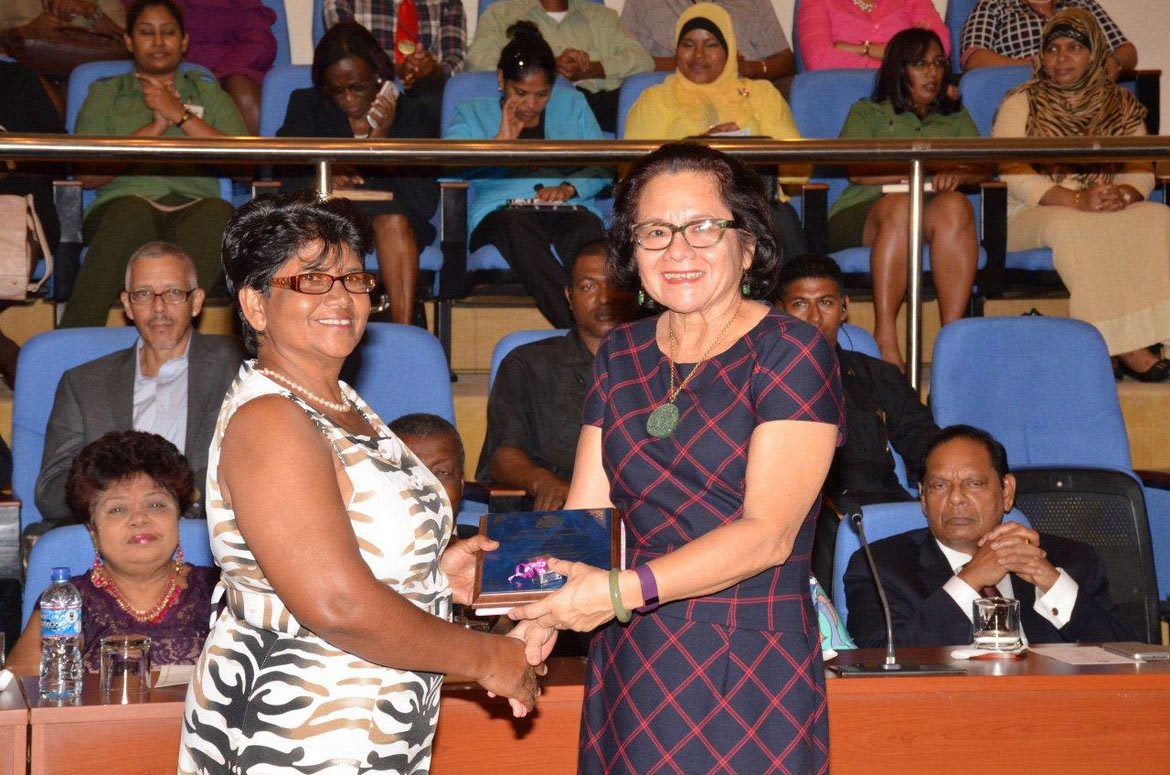 Ms. Nandranie Coonjah smiles as she receives an award for her outstanding service in community development from First Lady, Mrs. Sandra Granger.

Women must be empowered to participate in political decision-making; to have a say in their communities and in the institutions of the State

“We will, in ten days’ time, restore citizens’ constitutional right to participate in the governance of their communities. We will wake up from the nightmare of not having had Local Government Elections in over two decades…a nightmare that disempowered everyone, women included. Local democracy will empower our women politically by encouraging their participation in political processes. We cannot speak truthfully about gender equality without opening opportunities for women to compete in the political decision-making process,” he said.

Meanwhile, Minister of Social Protection, Ms. Volda Lawrence said that efforts must and will be accelerated to ensure that women’s rights are upheld.

“This is a historic day. We are here to pay homage to women across the world but more particularly, Guyana. This need for the promotion for gender equality has already been identified and listed as Goal No. 5 in the SDGs [Sustainable Development Goals]. This means our efforts have to be intensified. Our government has made progress but many more policies, initiatives and programmes have to be embraced and implemented to narrow the gap of gender equality and to achieve new heights of social, political and cultural inclusion…In order to achieve gender equality we have to ensure equal participation and opportunities. Our government must pledge to make sound investments in gender parity through concrete and measurable programmes that will dismantle the barriers that threaten our achievement of gender equality,” she said.

At the close of the programme, 54 women were awarded for their outstanding service in the fields of community and regional development. One of the awardees, Ms. Cheryl Sampson, who hails from Essequibo Islands – West Demerara (Region Three) in an invited comment, said that she was extremely pleased to be recognised for her decades of community service.

“I feel honoured, having laboured in the fields of women organisations and women development for over 40 years and to be recognised, I feel good. I have worked, I have toiled and I never gave up and I am glad that I am being recognised,” Ms. Sampson said. 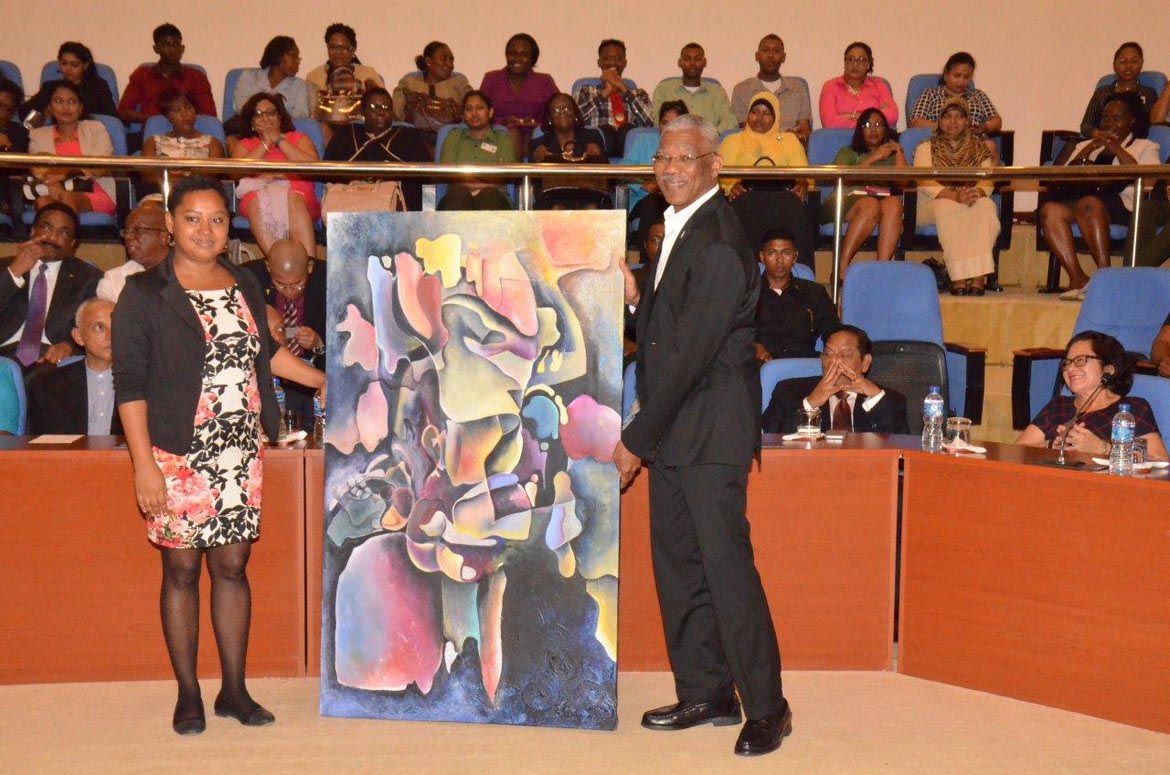 President Granger receives a token of appreciation from Ms. Devina.

She also commended the President’s pledge to ensure that laws relating to women are enforced. “We have had so many laws done for women.[They are] there but never implemented and as long as you have a President of the country who is interested in women’s affairs, for sure you are going to have it done and we look forward to 50-50 soon,” she said.
Another awardee, Ms. Sheila Veerasammy, a member of the People’s Progressive party, who was honoured for her contributions to the development of her region and community, said that she was humbled by the recognition.
“A day like today, when you would have passed through lots of struggles in working with women to ensure that they are elevated, when you would have received an award for the work done over the years, it is an achievement,” Ms. Veerasammy said.

Ms. Nandranie Coonjah, who hails from Pomeroon-Supenaam (Region Two), was also grateful to be recognised by the Administration for her work. “I feel honoured, this morning, and I want to say thank you to the President and to the Minister responsible for this. This doesn’t happen often. The only time people recognise you for what you have done is on your funeral day so I feel very, very happy for this,” she said.