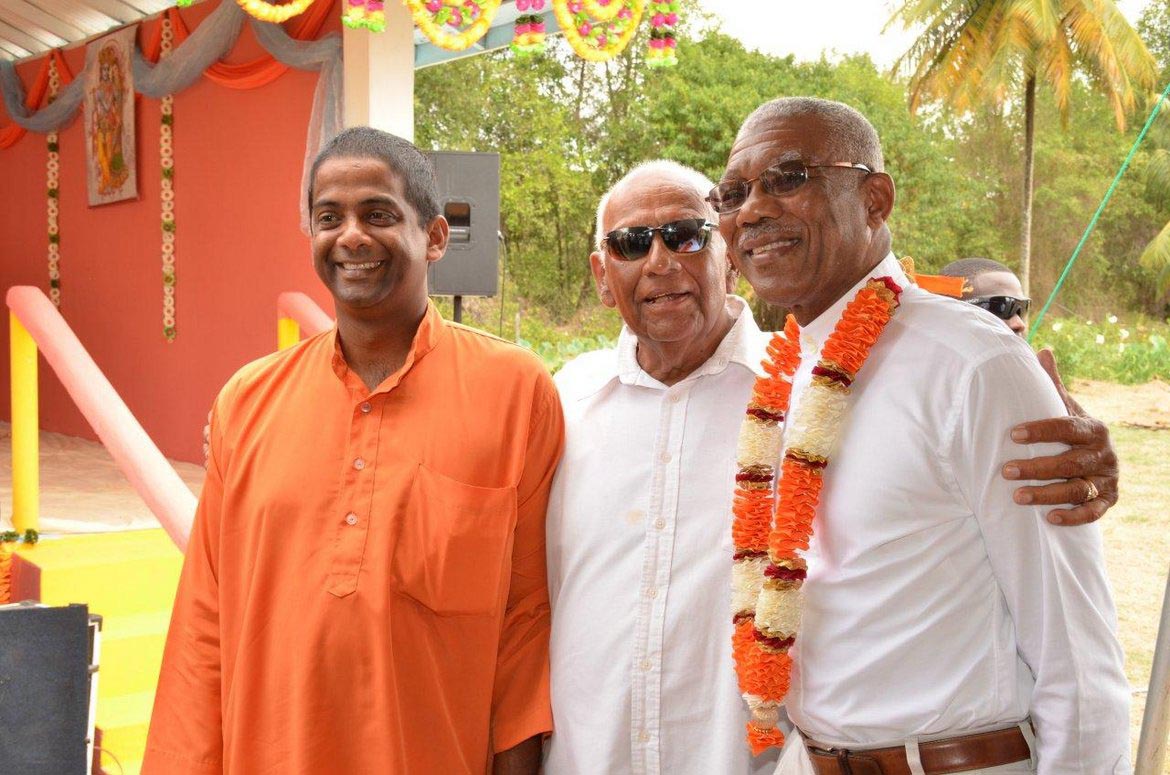 Though not a calendar holiday, Maha Shivaratri or Night of Shiva is a very significant festival for Hindus in Guyana. It is marked by fasting, prayers and other rituals that last for a duration of 24-hours.

The President was accompanied to the Ashram by Minister of Social Cohesion, Ms. Amna Ally.

President David Granger mingles with devotees at the Maha Shivaratri observances at the Cove and John Ashram.

In his address at the Ashram, the President said that this auspicious festival, which is characterised by acts of devotion and veneration of Lord Shiva, enriches the culture of the entire country. “We recognise and respect the right of Hindus to observe their religious festivals and to propagate their religion, including through education,” President Granger said.

He also commended the work of the Guyana Sevashram Sangha, as it is an integral part of the Hindu community in Guyana. “The rich traditions and festivals of Hinduism have knitted the local Hindu community together and have ensured that Hinduism remains vibrant in Guyana, the President said.
The Head of State spoke of the peaceful coexistence of religious groups in Guyana where the Mandirs, the Mosques and the Churches are literally side by side in many communities. He explained that religious freedom encourages citizens to feel like part of a society, reinforces societal ties and contributes to social cohesion and harmony.

“Hinduism, Islam and Christianity and other faiths are all practised freely and openly in Guyana. We are all proud of the fact that, unlike many other countries, we are at peace with ourselves and Guyana has been spared violent religious conflicts,” the President said. 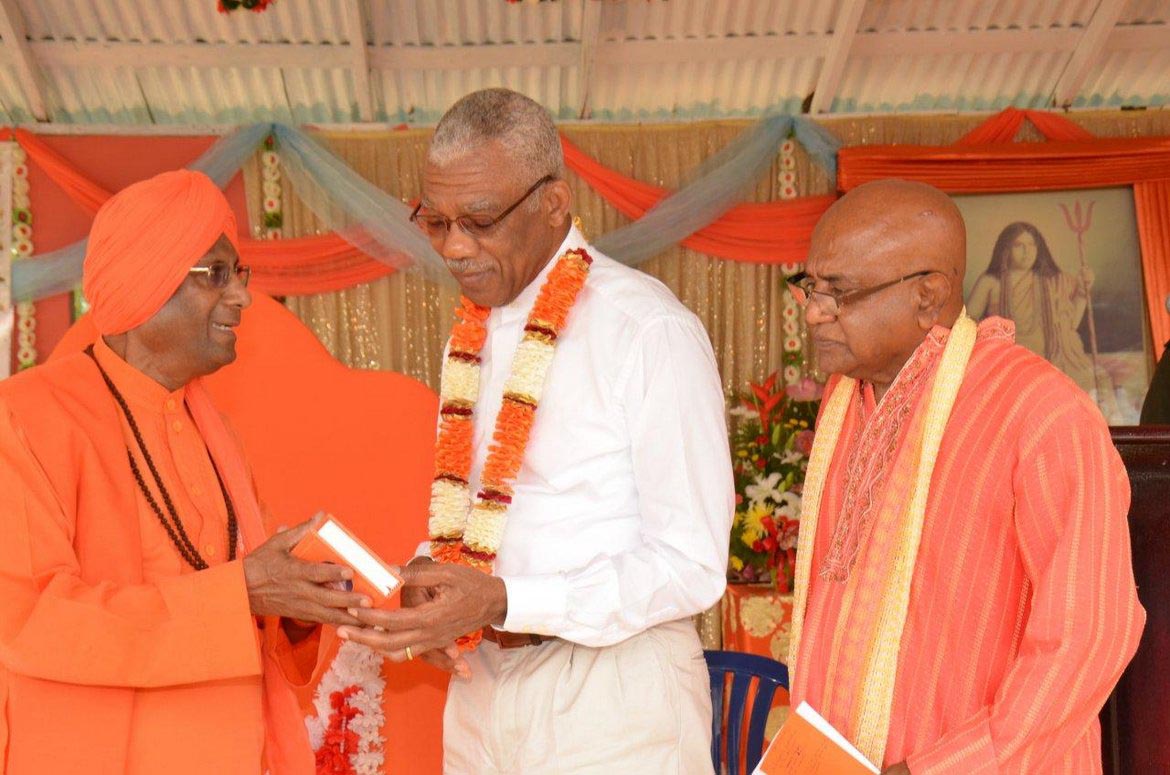 His Holiness Swami Shivashankaranandji Maharaj presents President David Granger with a copy of the Hindutvam or ‘Hindu Bible’, while former Minister of Finance and member of the Guyana Sevashram Sangha, Mr. Sasenarine Kowlessar looks on.

The Ashram was founded in 1956 by Swami Purnanandaji Maharaj, who is not only recognised as a pioneer of Hinduism, but also for his role in promoting the importance of education, particularly on the East Coast. Today, the Cove and John complex also houses a non-sectarian school that promotes learning in a highly disciplined and spiritual environment.

President Granger said that Swami Purnanandaji Maharaj’s vision of educating Guyana’s children is one which he shares and is at the core of his ‘Five Bs’ (Boats, Buses, Bicycles, Books and Breakfast) programme, which his Administration is aggressively pursuing.
Meanwhile, Minister Ally in her Maha Shivaratri message, spoke of peace, unity and love which she said are the key requirements if communities are to be developed. 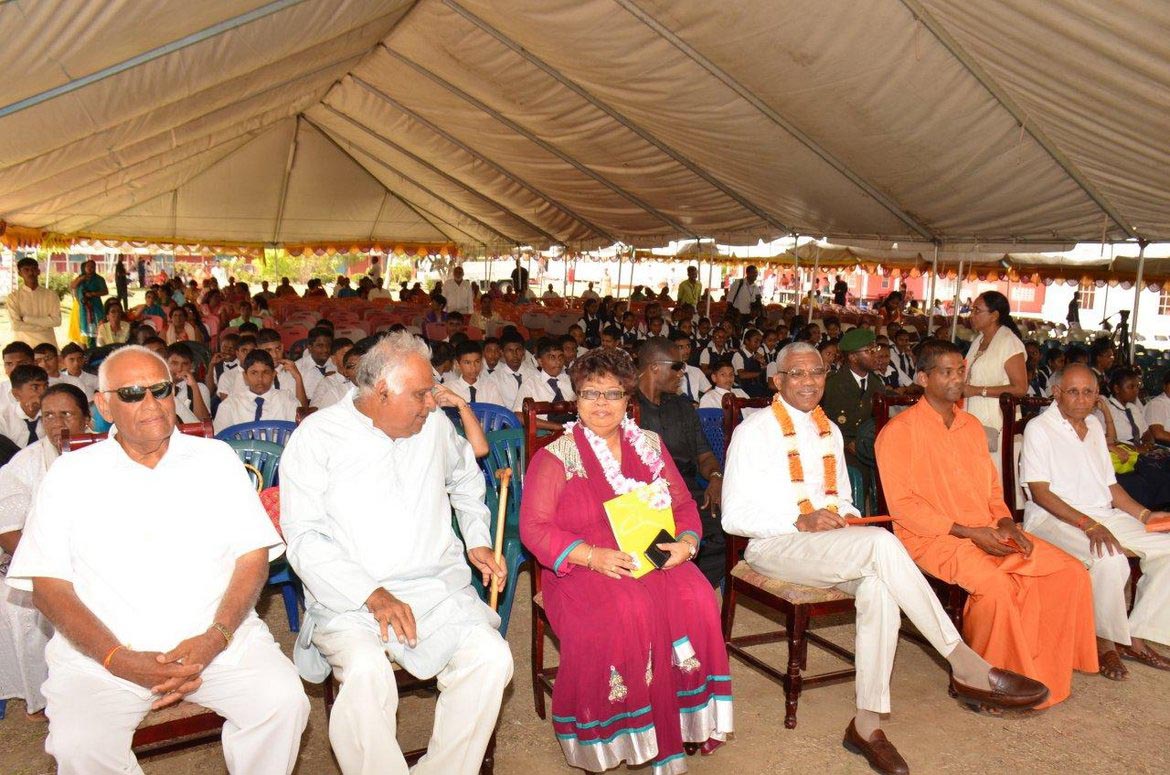 President David Granger (third from right) and Minister of Social Cohesion, Ms. Amna Ally, sit among devotees at the Cove and John Ashram.

“Every year it is known that the Ashram invites everyone in the fraternity of humanity,” she said, adding that “during the auspicious observance of Maha Shivaratri this year, as Minister of Social Cohesion, my hope is that the call to join you is well-received and [draws a good response].”

The Guyana Sevashram Sangha is a non-profit, philanthropic and charitable organisation with a firm belief in the service of humanity and is committed to improving the lives of the underprivileged.