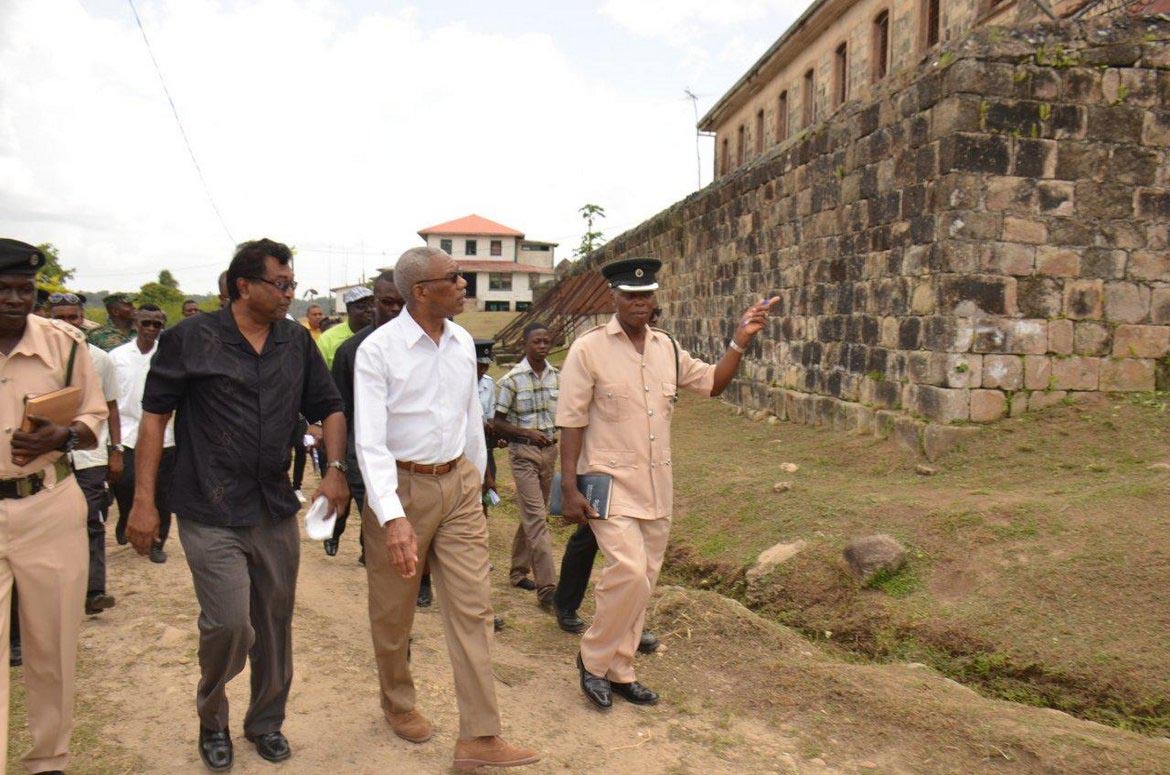 Regional Chairman, Mr. Gordon Bradford and Commander of F’ Division, Mr. Ravindradat Budhram also joined the President at a meeting with staff of the institution and on a tour of the facility. The team paid close attention to the infrastructure of the settlement, including the maximum security area, a workshop and the staff quarters. The visit is part of Government’s Assessment of all the GPS facilities to determine current physical and human resource capacity so that informed decisions can be made on how best to improve the way the service functions.

President David Granger and Minister of Public Security, Mr. Khemraj Ramjattan being led on a tour of the Mazaruni Penal Settlement by Officer in Charge Mr. Alexander Hopkinson.

President Granger referred to the visit as an important fact finding and problem solving mission and assured the staff and officials present at a briefing meeting, held before the tour of the facility, that problems within the GPS will be resolved within the limit of the country’s resources and to the best of the Governments ability.

Referencing what is now Guyana’s worse prison riot in history, where 17 inmates lost their lives at the Georgetown Prison last week, the President noted that the prison service has had problems that are endemic that must be solved. “Our presence here is not just a gut reaction. It is a plan to ensure that there is a long term strategy. We are ensuring that the Guyana Prison Service fulfills its mandate. We have to build a system in which persons who enter this service as inmates would have the best opportunities for rehabilitation and those who are incorrigible… would be prevented from bringing harm to society,” the President said.

The Head of State added that if these changes had been made over time, then the tragedy that occurred in Georgetown, may not have happened. He said, “What occurred in Georgetown ought not to have occurred had improvements been introduced to the Guyana Prison Service over a period of time… Some of the measures, which could have corrected or could have prevented the events of last week were not implemented.” 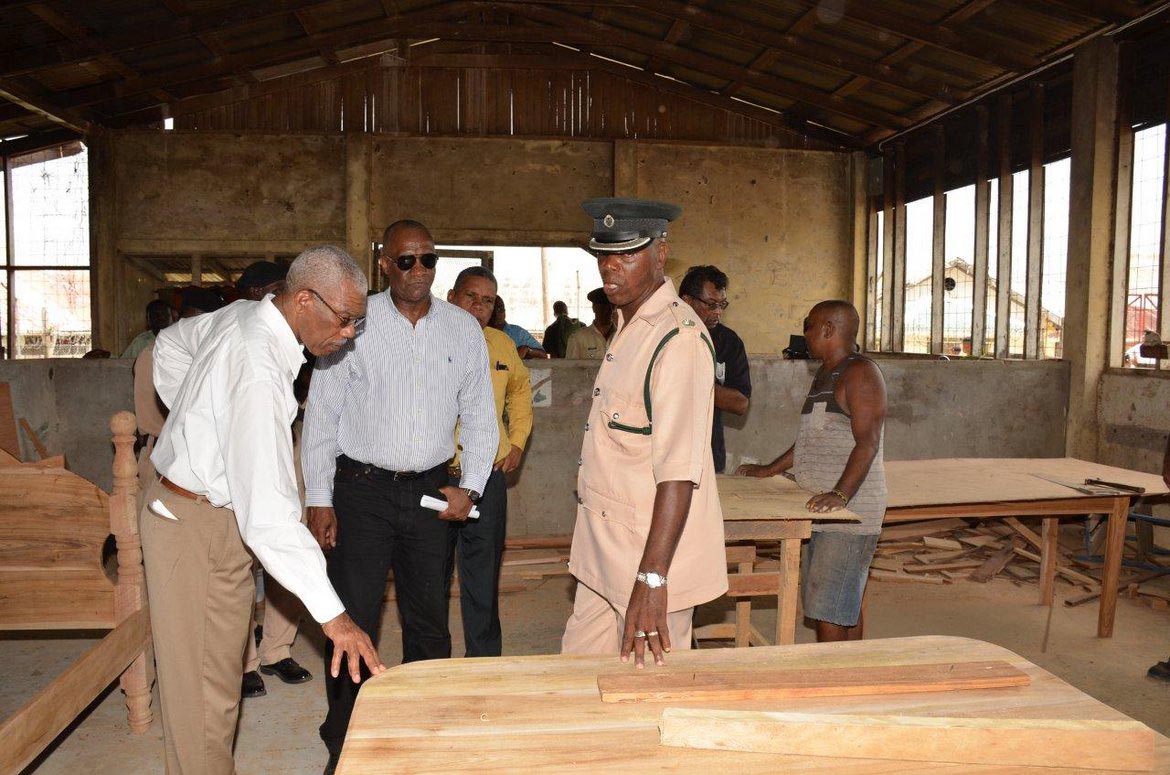 President David Granger and Minister of State, Mr. Joseph Harmon examining some of the work done be inmates at the Mazaruni Penal Settlement.

Upon his arrival at the 173 year old penitentiary, the Head of State was presented with a thorough brief by Officer in Charge (OC), Mr. Alexander Hopkinson on the inner workings of the facility as well as the administrative and other challenges that are being faced on a daily basis. The prison officers and other administrative staff were also given the opportunity to air their concerns with the President and the Ministers.

President Granger assured the staff that the Government will try its utmost to ensure that their issues, particularly those that relate to their personal welfare and that of their families, are addressed in line with what obtains within the other services, which fall under the remit of the Ministry of Public Security.

At present, the prison houses a total of 289 inmates, 24 of whom are high-profile criminals. On the other hand, the required staff complement is 95, but the facility only has 54 on staff currently. The OC explained that they are looking to increase their staff strength in order to increase capacity. However, accommodation and other logistical arrangements have to be addressed before than can happen. 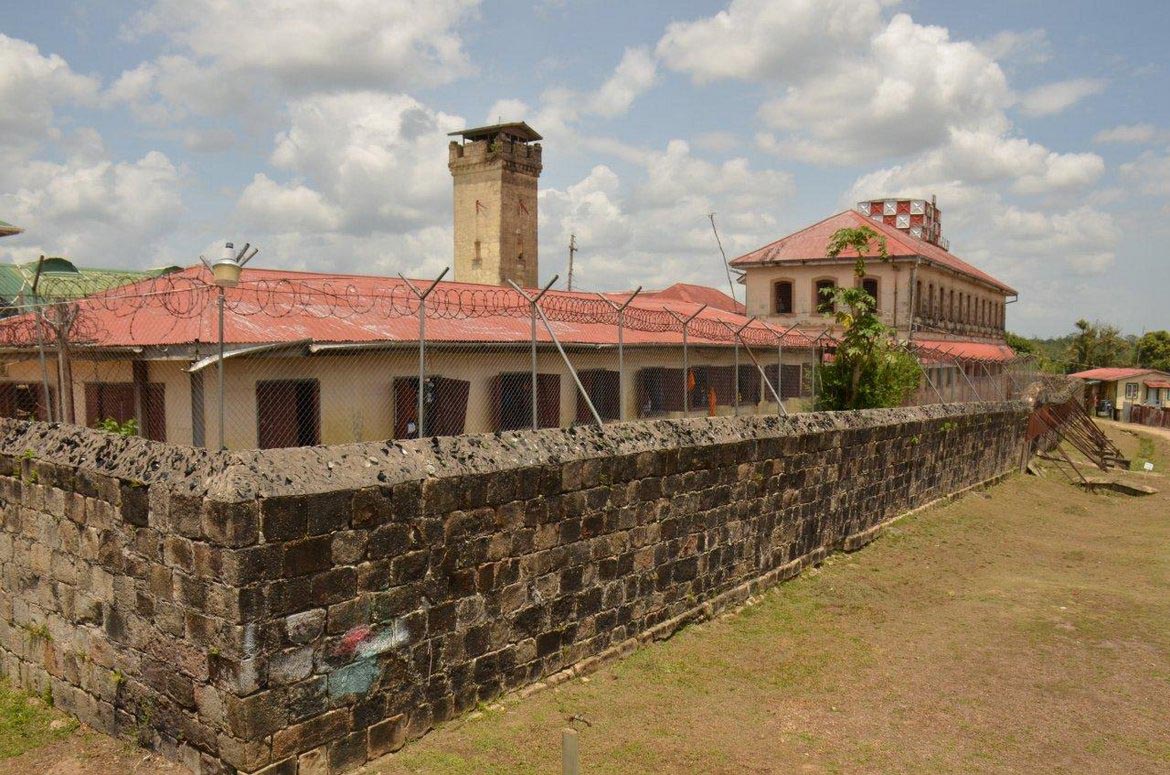 One of the inmate blocks at the 173 year old Mazaruni Penal Settlement.

Bartica gets 50-seater bus, bicycles under ‘Five Bs’ programme – calls for the spirit of enterprise to be re-ignited