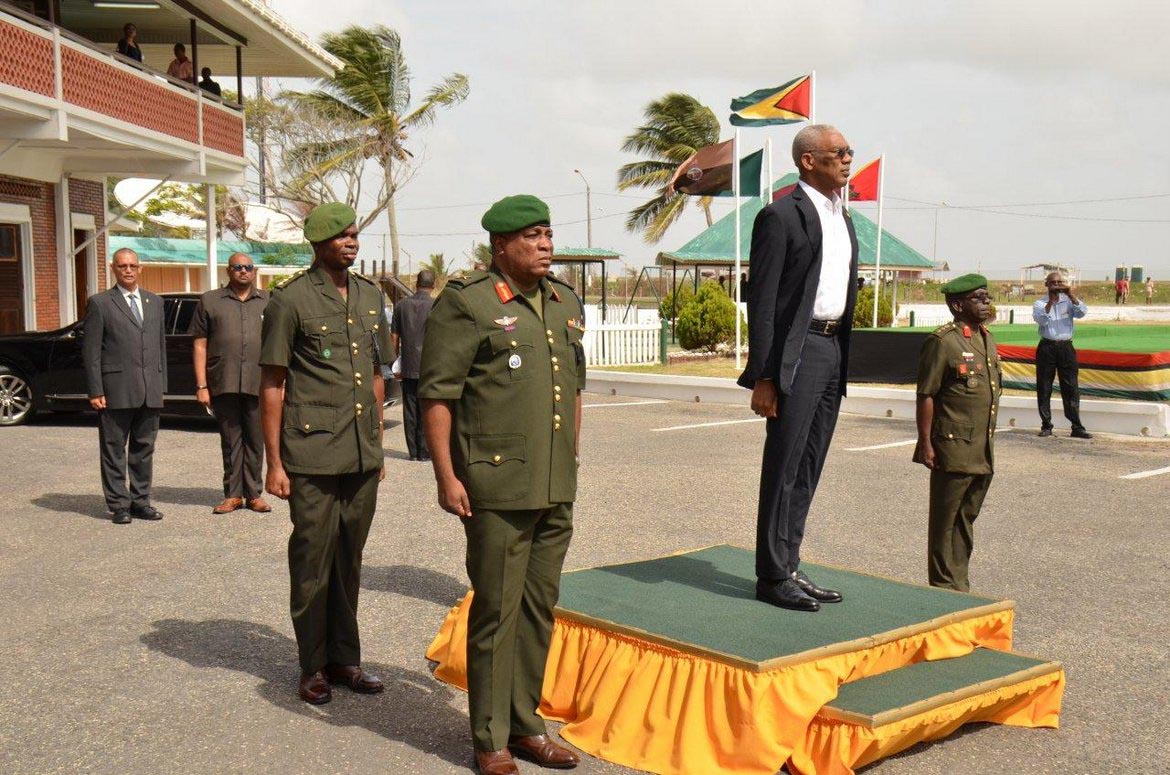 Georgetown, Guyana – (March 3, 2016) President David Granger said that Guyana’s national defence strategy over the next four years to 2020, must incorporate steps, in concert with regional partners, to address the security threats facing the Caribbean.

The President made these assertions in his address, today, at the opening of the Guyana Defence Force’s (GDF) Annual Officers’ Conference at Base Camp Ayanganna. The two-day event is being held under the theme, “Towards greater operational readiness for national defence and security”.

Inextricable part of the Caribbean Community

Referencing the recently concluded Inter-sessional Meeting of CARICOM Heads of Government, the President said that as a collective, the Caribbean Community agreed on a protocol to amend the Revised Treaty of Chaguaramas to incorporate the Council for National Security and Law Enforcement (CONSLE) as an Organ of the Community and the Implementation Agency for Crime and Security (IMPACS) as an Institution of the Community.

“Guyana must be a reliable partner in the cause of regional security and in ensuring that the Caribbean remains a zone of peace… Our strategy must emphasise that Guyana is a ‘national’ power, but with Regional interests. It must ensure that national independence is preserved, sovereignty is secured and its territorial integrity is guaranteed,” the Head of State said.

Over the past 50 years, diplomacy has been Guyana’s first line of defence, a strategy that, the President said, continues to yield dividends. Only recently, CARICOM Heads issued a Communique reaffirming their unequivocal support for the maintenance and preservation of Guyana’s sovereignty and territorial integrity. A similar statement of support was issued by the Commonwealth at its Heads of Government Meeting in November last year in Malta.

“Guyana, a small state, has used its diplomatic might to garner support for its efforts to deter aggression, safeguard its territorial integrity and secure the cooperation of the international community. It has successfully suppressed internal insurrection,” he said.

Through diplomacy, Guyana has already had recourse to international juridical mechanisms for the peaceful settlement of disputes. This is in relation to maritime controversy with neighbouring Suriname that saw Guyana approaching the International Tribunal on the Law of the Sea (ITCLOS) in 2004, which ruled in Guyana’s favour.

Additionally, Guyana has expanded its diplomatic relations with a number of regional and international organisations. These include: CARICOM, UNASUR, CELAC, MERCOSUR, the Organisation of American States (OAS) and the Association of Caribbean States (ACS) to name a few.

“These recent expressions of support for Guyana’s territorial integrity emanating from regional and international organisations follow a series of similar statements which have served as a deterrent against neighbouring aggression. Guyana will continue to pursue diplomacy to advance relations within the international community and to secure its vital national interests, including defence against external threats,” President Granger said. 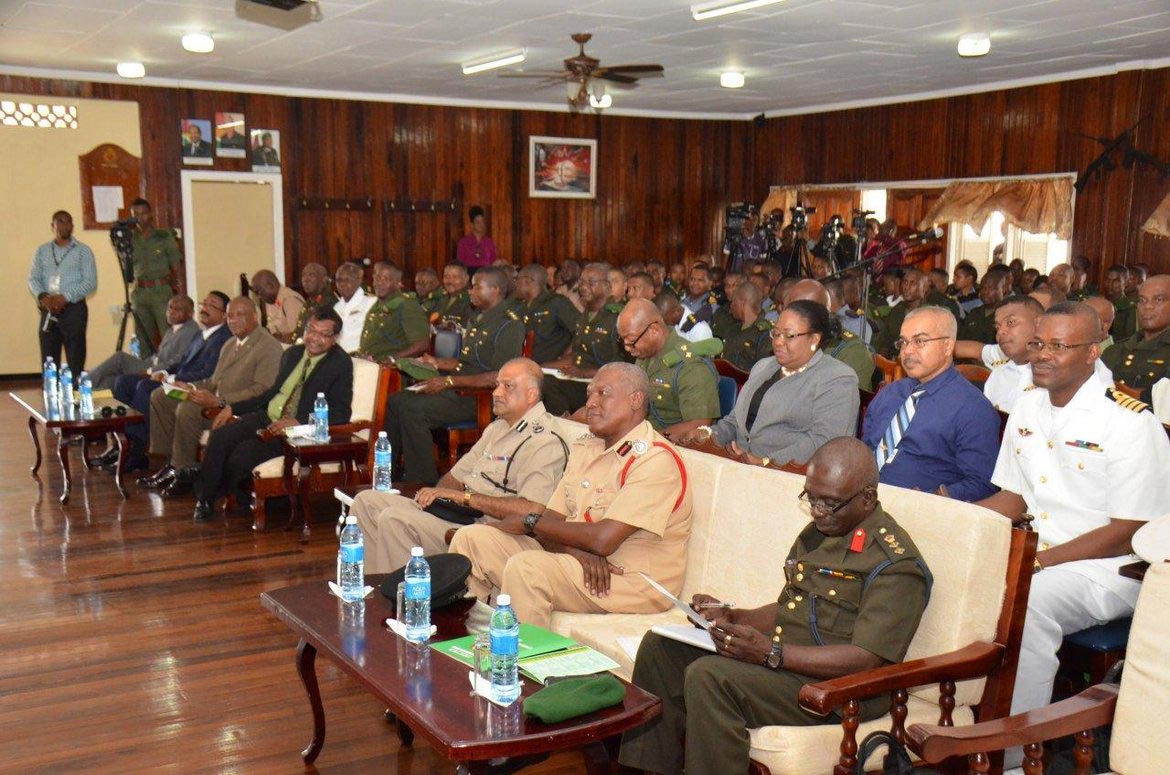 A section of the audience at the opening of the Guyana Defence Force’s Annual Officers’ Conference. In the first row, from left, are Ministers Carl Greenidge, Basil Williams, Joseph Harmon and Khemraj Ramjattan.

The President also spoke of the country’s responsibilities under the various regional and international treaties and agreements to which it is a signatory, noting that these agreements have been the bases of the Guyana’s defence engagement in the Caribbean, particularly in the areas of disaster relief and humanitarian assistance.

Over the years, Guyana has provided military and humanitarian support to sister-CARICOM countries as well as several peace-keeping missions.

“Defence diplomacy has fortified the country’s international posture… Diplomacy has allowed the Guyana Defence Force to enhance its capabilities through training and the receipt of equipment from foreign forces and governments,” President Granger said.

As part of the new Total Defence Strategy, the Government is seeking to augment the strength of the GDF with a strong reserve force, namely the Guyana People’s Militia. The President said that these two forces must always be in a state of operational readiness and be capable of being deployed to any part of the country.

“Guyana’s borders are too extensive, its land space is too expansive and the cost of maintaining large regular units too expensive to maintain effective territorial and coastal security. The surveillance and securing of our territory demands that the Force have a physical presence in each administrative region in the form of part-time reservists. The ‘reserve force’ will support the ‘regular force,” the Commander-in-Chief of the Armed Forces said.

The reserved force will be deployed in every region to ensure that Guyana’s defence is total and comprehensive; covering all borders and sea, air and land spaces.
Meanwhile, army Chief of Staff, Brigadier General Mark Phillips said that the border incidents and insurrections in the 1960s and 1970s and, more recently, Venezuela’s gunboat in Guyana’s waters and its decrees, are all reminders that the Force must always be vigilant and operationally ready to defend the country’s territory.

He informed the gathering that during 2015, the Force was involved in increased training activities and it quickly adapted to the changes that came with the election of a new political administration and defence board.

By the end of last year, the GDF recruited and trained a substantial number of new soldiers, which has significantly improved the staffing complement in the various units. Importantly, the borders are adequately staffed.

“For 2016 our operational tempo and training activities will be no less hectic than it was in 2015…We remain hopeful that our shared aspirations for better air, maritime and engineering assets necessary to exercise greater land and maritime domain awareness, will be converted into a defence capability plan to detail and schedule procurement programmes for the period 2016-2020,” the President said. 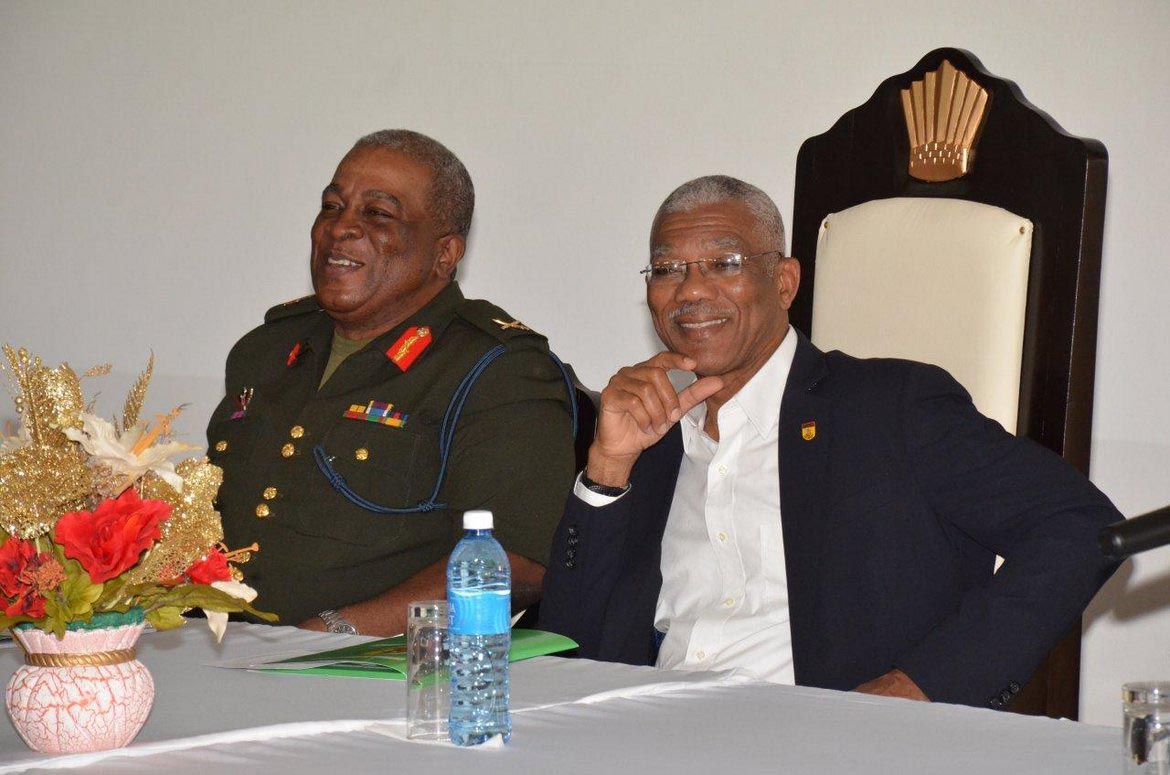