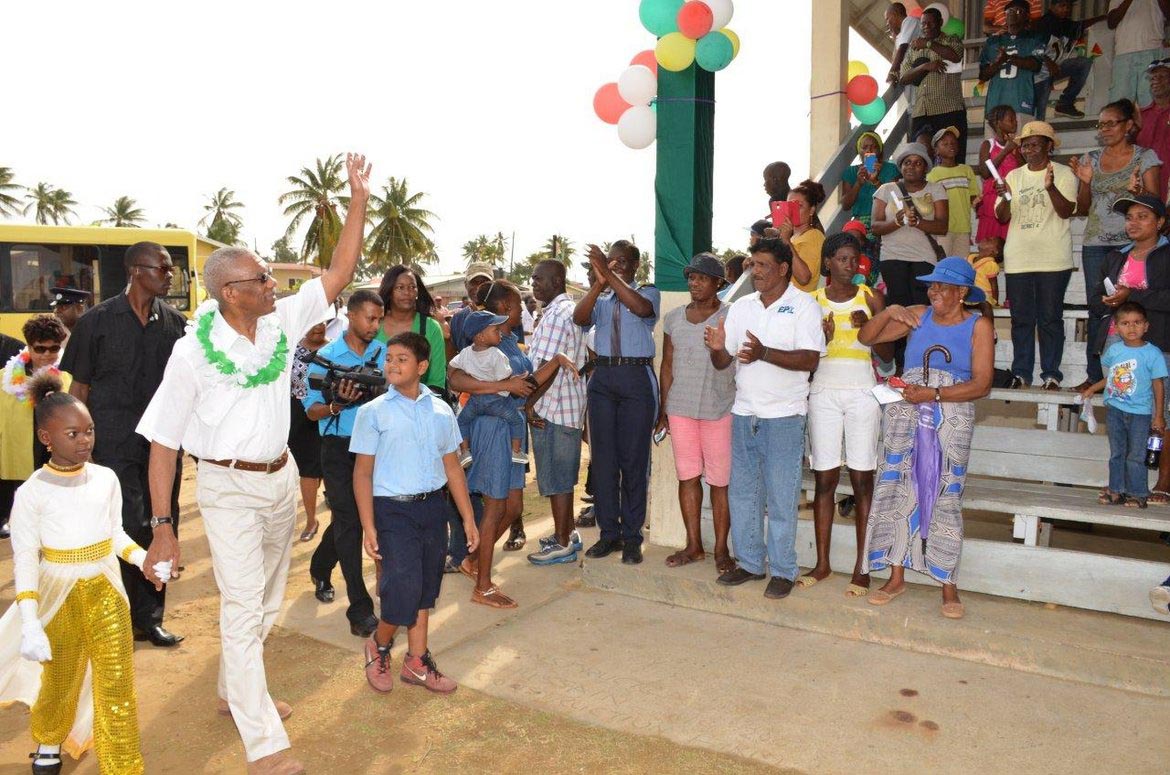 Georgetown, Guyana – (February 25, 2016) President David Granger said that education employment, equality, enterprise and empowerment are the composition of the formula for success and gave assurances that his Administration is working to create an enabling environment that will equip Guyanese across the 10 Administrative Regions to achieve this success.

The President was at the time addressing a packed pavilion at Kildonan Village, Corentyne, where he officially handed over a 50-seater school bus, today, that was donated by prominent businessman, Mr. Peter Lewis, to the Government’s ‘Three Bs’+ Breakfast and Books programme. The President was accompanied by Minister of Social Cohesion, Ms. Amna Ally.

The Head of State pointed out that Guyana is the largest, most bountiful Caribbean country and as such, it needs an educated population to take possession of and harness its full potential.

“Where would the engineers to develop this country come from, where will the scientists come from, where will the accountants and attorneys come from, they come from the schools, but if the children don’t get to go to school in the first place, we will not be able to develop this country…. We believe that the only way we can get by in colonial society is by our social mobility and our social mobility has always been based on education,” the President said.

President Granger said that while travelling across the country, he sees first-hand the struggles that some children have to endure to get to school. Some students in the Hinterland have to walk for miles to get to a school, while those on the coast and in riverine communities spend thousands of dollars on transportation alone.

While transportation costs will not be a factor for well-off families, in poor families this issue often determines their children’s punctuality or whether they attend school at all. This kind of societal inequality, the President said, places the rich at an advantage over the poor. However, the objective of the ‘Three Bs’ programme is to ensure that all children are afforded equal access to education, thus better positioning them to break the cycle of inequality. He also spoke of plans to expand the programme in the near future to include a nutritious breakfast and books. 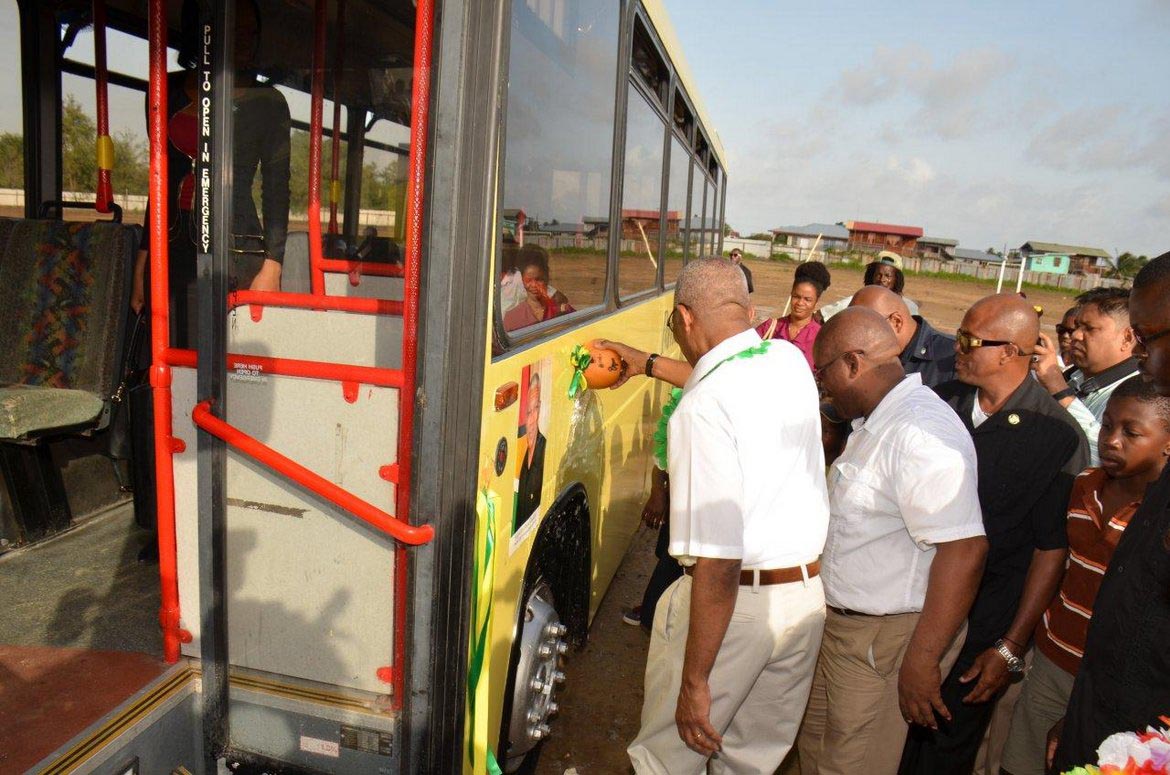 President David Granger pours coconut water on one of the wheels to symbolically commission the vehicle.

“We want to see enterprise and you will get that opportunity with sound education, with education you will have the knowledge to get up companies of your own…you are not inferior,” the Head of State said.

Meanwhile, with the long-awaited Local Government Elections fast approaching, President Granger urged the residents to ensure that they elect officials who will work in their best interest and enhance their communities.

Minister Ally whose Ministry has been at the forefront of garnering the support of corporate Guyana for the ‘Three Bs’ programme, said that people throughout the country are beginning to see the evidence of the good life that was promised by the APNU+AFC Coalition. She expressed the Government’s gratitude to the donor, Mr. Lewis, who alone donated two buses and a boat to the programme.

The Minister echoed the President’s sentiments on equality, saying that equal opportunities must be made available and barriers must be broken in order to facilitate development. She also called on the political Opposition to embrace togetherness, saying that the days for divisive politics are over.

“Don’t let anyone impede progress for you and your community. The Government is keen on reducing poverty and inequality especially, and [in] providing a good life for all of you,” she said.

The Government came in for high praise from the residents. Regional Executive Officer, Dr. Veerasammy Ramayya said that the initiative is commendable and will greatly assist parents.

Meanwhile, Head Teacher of the Crabwood Creek Primary School, Mr. Clement Edwards, said that a well-educated Region will significantly impact national development. “We needed this service and thanks to the President, it has eventually come to us,” he said.

To date, seven buses, six boats, over 300 bicycles have been distributed across the country under the programme. 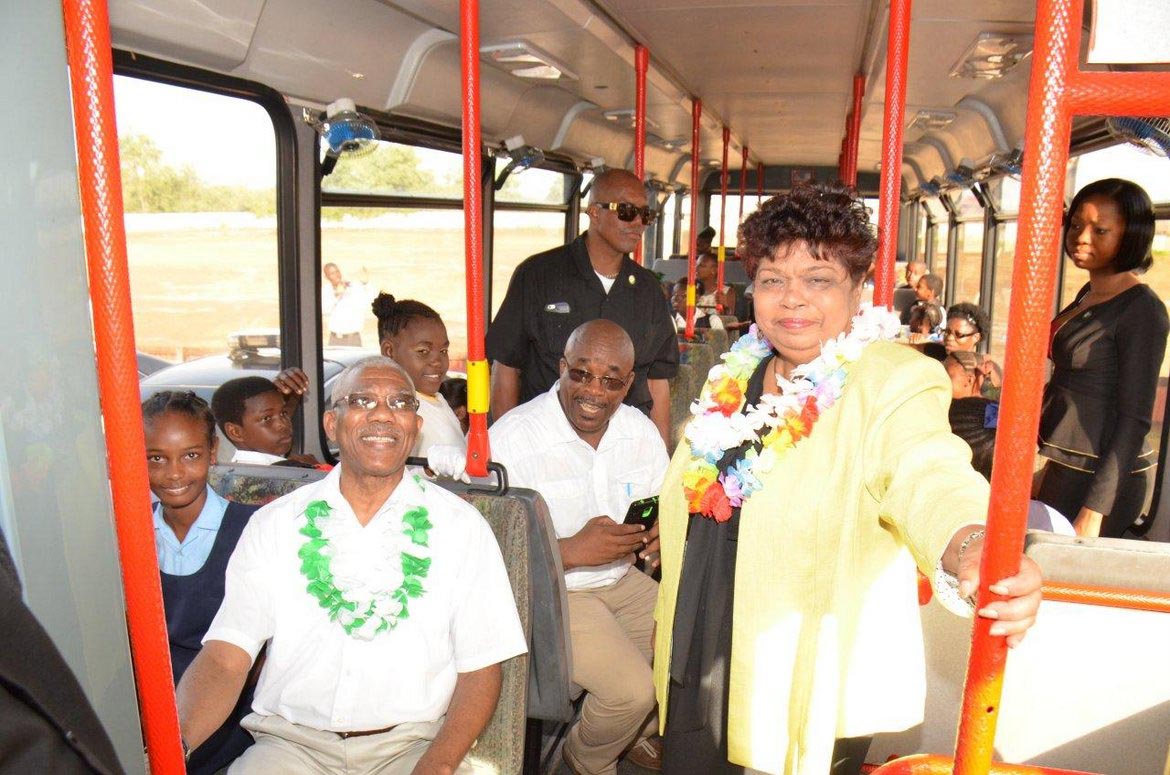 President David Granger and Minister of Social Cohesion, Ms. Amna Ally checking out the inside of the 50-seater bus.