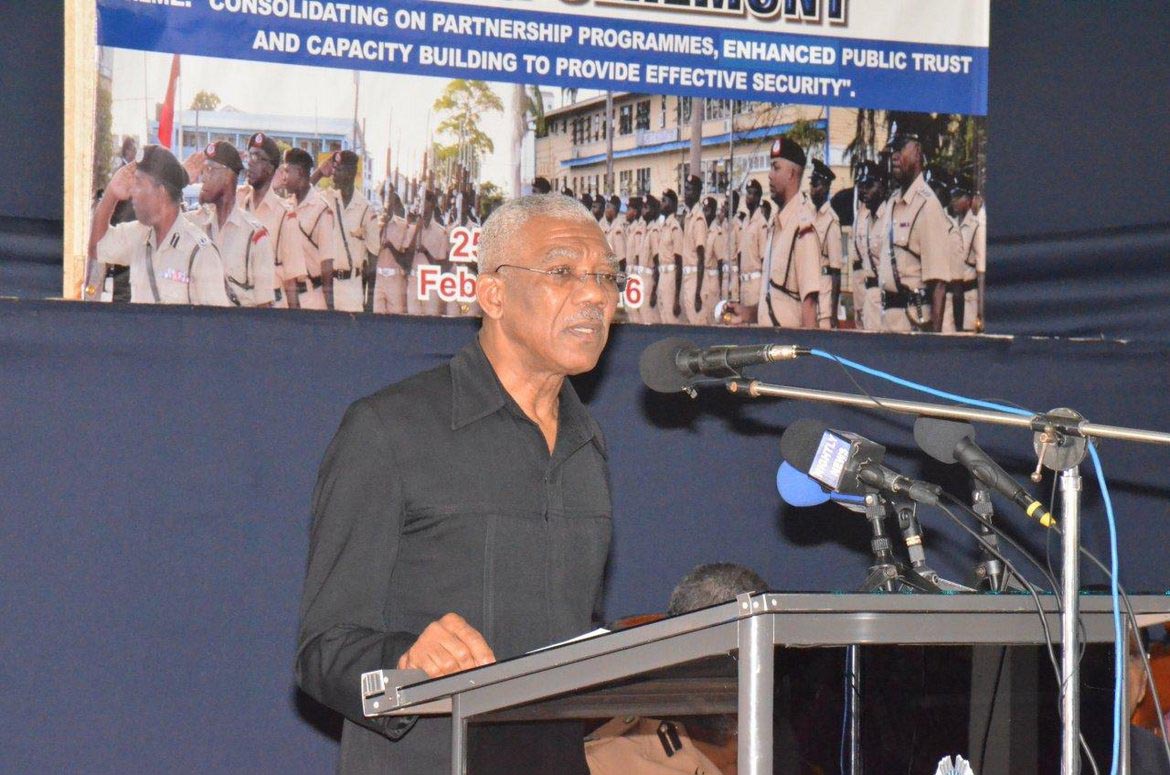 The President made this appeal in his feature address at the Opening Ceremony of the Annual Police Officers’ Conference, held at the Officers’ Mess, Eve Leary. The Head of State pointed out that while community policing groups should support the work of the Force, they must never supplant its role.

He noted the Commissioner of Police must bear the responsibility for reforming these groups and must, in the process, ensure that the system does not become one which encourages political policing whereby some villages have efficient community services and others don’t if they are perceived to be supporters of a particular political administration.

“The Force has as its principal objective, to ensure the safety of citizens. That mandate was assigned by the Constitution of Guyana…The Force’s foremost responsibility is to ensure that citizens are safe. The Force must surmount this challenge and fulfil its mandate to the Guyanese people. It must fulfil its obligations under the Constitution. It must honour its duty under the law to keep our communities and people safe,” the President said.

Further, he said, there should be bonds of mutual trust between the police and the public as community policing establishes partnerships that focus on “problem solving and they place emphasis on public safety and public service with the aim of improving the quality of life.”
According to the President, safe communities are the core of a secure country and the Administration believes that every citizen performs best in a safe community, with people who share common values.

“Our approach is about respecting and protecting the most vulnerable members of society, the elderly, the women, the children, especially girl children. We’re therefore disturbed that so many crimes are committed in our communities; a 78 year old woman is raped and murdered or a 14 year old girl is raped or murdered…these are community offences and it is in the community that we must put our policing efforts; to protect our citizens; to make them safe. Safety in…homes and communities is our greatest and foremost concern,” President Granger said. 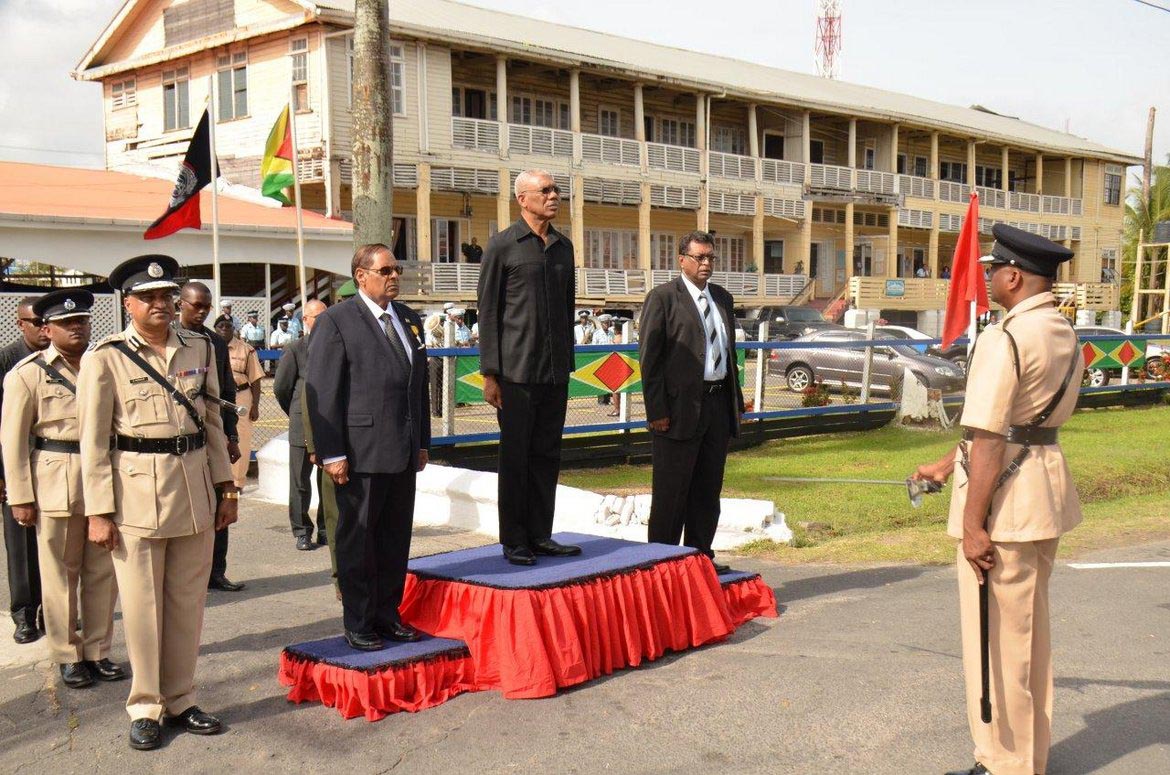 He added that communities must be places that promote happy, harmonious, healthy households and every citizen deserves to live in his/her community without being robbed or abused. Safe communities are necessary for a good life; the ‘good life’ is not attainable if human safety cannot be assured by the State. “The privacy of homes must be safeguarded and protected from criminal invasion and interpersonal violence,” the President reiterated.

The President acknowledged that while he has seen the efforts of the Police Force in building relationships with the communities, this must go beyond outreaches.

“It [the Force] must intensify its partnerships through community policing and work with our communities’ schools, clubs, organisations and civil society. The Force, therefore, has to uphold that unwritten social contract between the citizen and the State. Citizens are assumed to have consented to have conformed to the law for the common good and in return, the State is assumed to be responsible for the physical integrity and protection of citizens’ property and lives. The State through the Police Force is obligated to uphold our side of the social contract and our Government is committed to ensuring that citizens remain safe,” President Granger said. 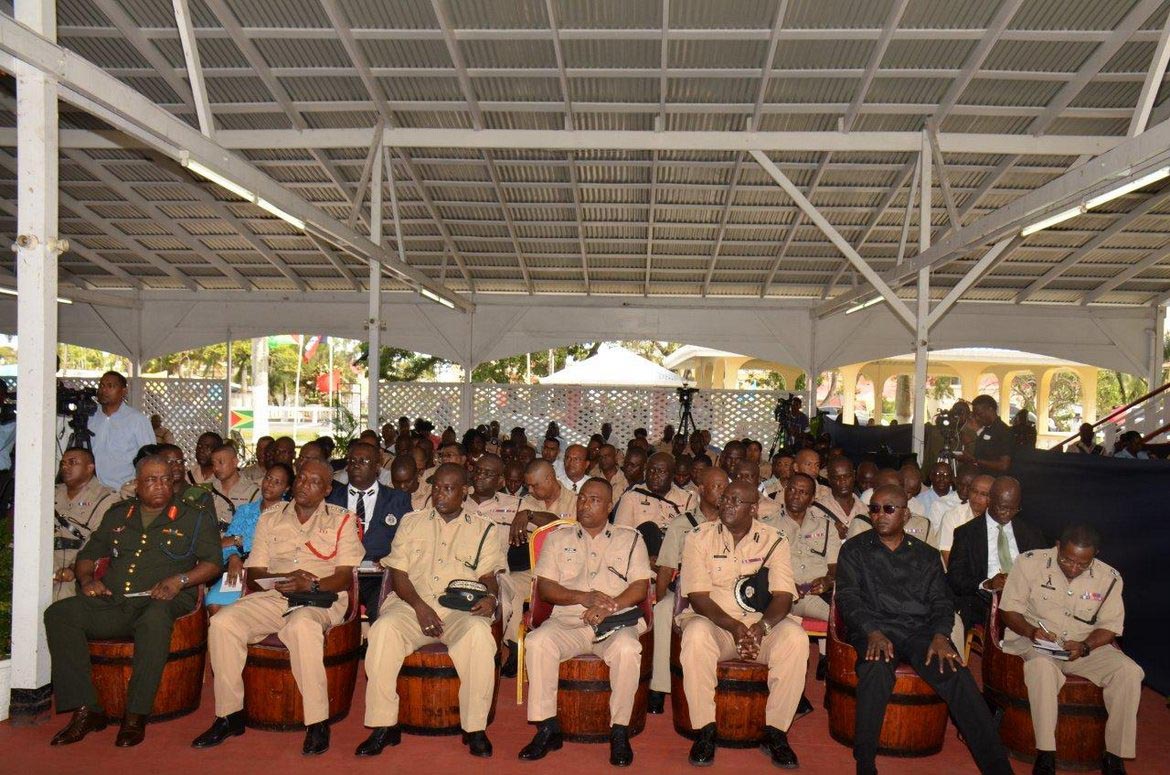 Chief of Staff of the Guyana Defence Force (GDF), Brigadier Mark Phillips and other Heads of Divisions of the Joint Services, at this morning’s Opening Ceremony

The Commander-in-Chief of the Armed Forces of Guyana said that it is evident by the proliferation of security firms, and the large numbers of applications for firearm licenses that there is a great need for the assurance of safety and protection in the country. He bemoaned the state of the policing system that was inherited from the previous administration, and vowed that his Government will ensure that new approaches that take into consideration the safety of every citizen are implemented.

“The rejection of the United Kingdom Financing Security Sector Reform, a neglect of the National Drug Strategy Master Plan, the shelving of the reports of the Disciplined Forces Commission and dozens of other consultancies and other studies mainly from the United Kingdom were not accidental. This Government will implement the longstanding plan to reform the security sector. We will bring a new approach, one that not only suppresses crime, but also addresses the causes of crime. This approach is meant to make Guyana safe for our women, children and other vulnerable members of society. Communities must be secured from crime and violence. We must, therefore, be prepared to have a second look at the current highly centralised system of policing. We must develop a system [that] is now based on human safety in our communities,” the President said.

Speaking about the feasibility of the idea, the President said that it is impossible to establish a police station in every village, especially in the sparsely populated and hinterland villages and as such, Community Policing Groups are ideal. This, he said, will deter vigilantism; instead it will create partnerships between the Police Force and residents.

“Our population density means that our villages are located not just far distances from each other, but far from police stations. We have to build a system [where] residents of those villages can be assured of security even in the absence of police stations. The Police Force must, therefore, begin to develop a strategy for improving human safety in all of our communities without necessarily building more police stations and this is the strategy that will result in the evolution of our existing concept of community policing,” he said.

At the same time, the President cautioned against community policing being viewed as a substitute for work that should be done by the State sanctioned agency, the Guyana Police Force. Rather, he said, the Police Force should work in tandem with communities to offer options to the young people, many of whom may have dropped out of school and are unemployed, making them easy prey for criminality.

“So whether by boat, by foot, by vehicle, by horse, we must go where these community crimes exist and where community safety has to be assured, to allow the regular police to work alongside residents in order to deter crime. We are aware that over its decade of existence, the concept of community policing has been battered…but if community policing is inclusive it can contribute measurably to human safety… It is not a separate organisation, it is a function, not a parallel police force,” he said.

The President noted the requisite systems must be put in place before this can be accomplished. To this end, he announced that the Government will ensure that the Criminal Investigations Department is well-equipped to fulfil its mandate while it will also ensure that the Guyana Police Force is strengthened. 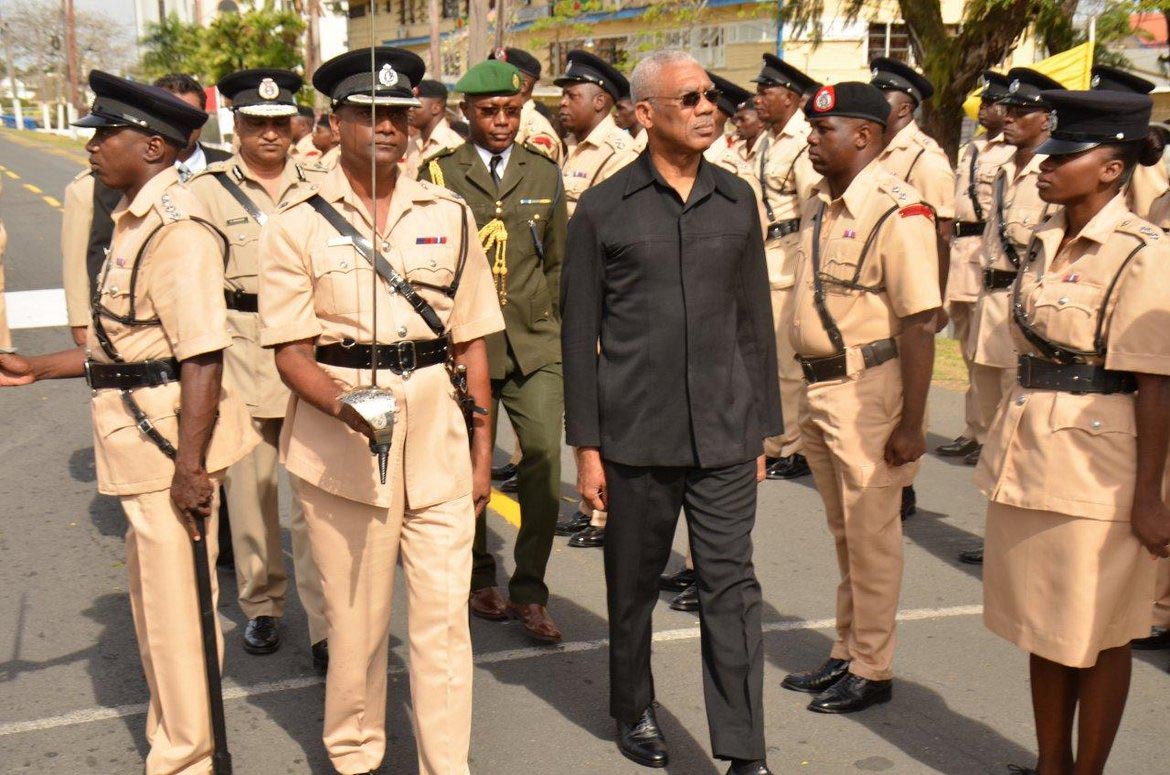 President David Granger inspects the Guard of Honour of Officers from the Guyana Police Force.

Meanwhile, in his address, Commissioner of Police, Mr. Seelall Persaud said that the Conference is organised each year with the aim of identifying areas that need to be strengthened and to plan the agenda for the new year.

In his reflections, he commended the President for initiating ‘Operation Dragnet’, after the crime rate had spiked. “Operation Dragnet has certainly positively impacted the crime and traffic control,” Mr Persaud said, noting that “The Criminal Investigations Department in the latter half of last year coupled with crime prevention methods have served to reduce fear of crime in Guyana.”

The Police Commissioner also praised the stance the new Administration has taken on unprofessional behaviour in the public service, adding that it has “enhanced public confidence [in the Force]” and will make its strategies more effective. He pledged that the Police Force will continue to form partnerships and plans to increase its human resources, establish a gender based violence and sexual offences units, a serial crime investigation division and anti-narcotic units, deploy bicycle patrol units, enhance the use of video analysis technology, and improve the 911 system, among other upgrades, during this year.

Mr. David Ramnarine, Assistant Commissioner of Police (Administration), said the President’s recommendations have been noted and will be deliberated on as a matter of priority over the next three days.

With regard to the proposed salary increases for the members of the joint services, President Granger said that the Minister of Public Security will be addressing this matter. 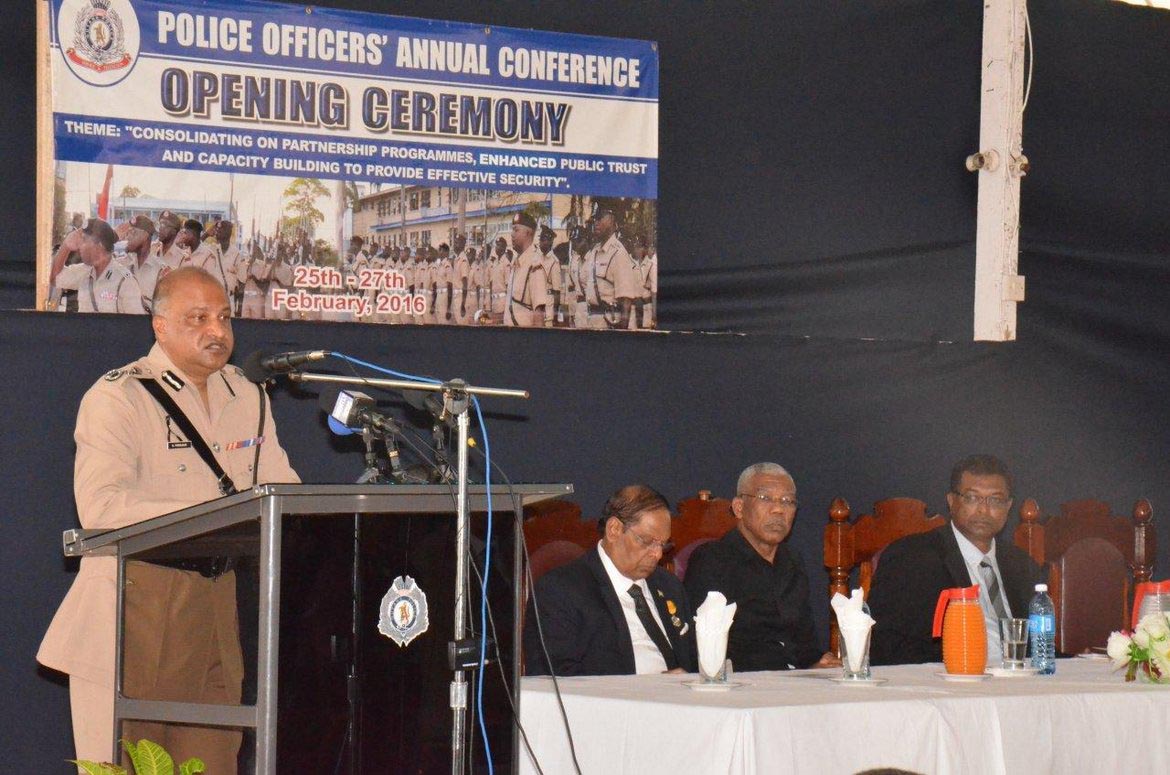 Amidst reports in the media that the Special Organised Crime Unit (SOCU) is starved for funding, President Granger said that money will soon be released for the operations of the unit.

“SOCU is a part of the Police Force and I have already signed the Appropriation Act so monies should be released very shortly. It is up to the Minister of Public Security and the Commissioner of Police to ensure that the money is spent for the purpose for which it has been budgeted…. I am very confident that we will see a change. We have already started seen changes in the particularly in investigations,” he said.