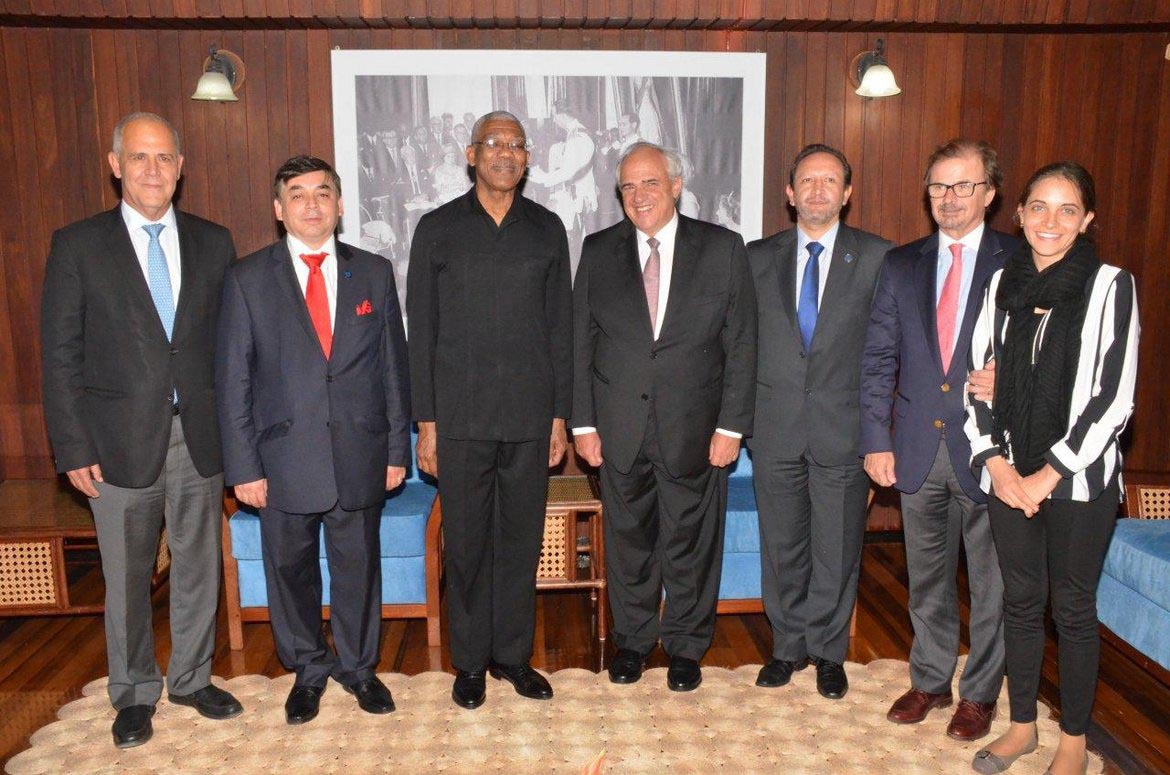 Georgetown, Guyana – (February 25, 2016) Secretary-General of the Union of South American States (UNASUR), Mr Ernesto Samper, today invited President David Granger to join the South American Defence Council and to speak on the issues of Security and Defence in relation to small States and the Caribbean.

During the meeting, which was held at the Ministry of the Presidency, the Secretary-General also pledged to foster closer ties between Guyana and UNASUR. Mr. Samper was accompanied to the meeting by Mr. Juan Salazar, Advisor of Chile to UNASUR, Mr. Enrique Vala Naruaja, Advisor of Argentina to UNASUR, Mr. Mauricio Dorfler, Director of Political Affairs of UNASUR, Mr. Bernardo Figueheido, Advisor on Infrastructure (Brazil) and Ms. Romina Marconi, International Assistant to the Secretary General.

In an invited comment, Mr. Samper said this is his first meeting with President Granger in Guyana and as such, he wanted to discuss the mandate of UNASUR as well as mutual areas of interest, including Security and Defence.

“We discussed the regional agenda of UNASUR and the importance of the participation of Guyana in these matters, especially on topics such as infrastructure, since we will be employing some projects here. I also invited him to the South American Defence Council to explain his theories about the security of the Caribbean and its implications on the security of the whole region and then we spoke about the South American Citizenship programme that we are supporting and presenting to all the countries,” Mr. Samper said.

The Secretary-General said that he is particularly pleased that President Granger has indicated his cooperation for the success of the projects and programmes discussed.

On the issue of the border controversy with Venezuela, Mr. Samper said that UNASUR would like to see a peaceful resolution so that the Region can continue to be a zone of peace…… I have been saying for the last month – that they (Venezuela and Guyana) can find a way to solve their differences because it is a peaceful region and we all want the peace of Guyana and Venezuela,” he said.

During a meeting with the Secretary-General, last year in Paramaribo, Suriname, President Granger had said that Guyana is committed to the infrastructural integration of South America. He had also noted that UNASUR’s agenda; to promote peace, democracy and human rights, could only be realised within a framework of peace and respect among South American states.