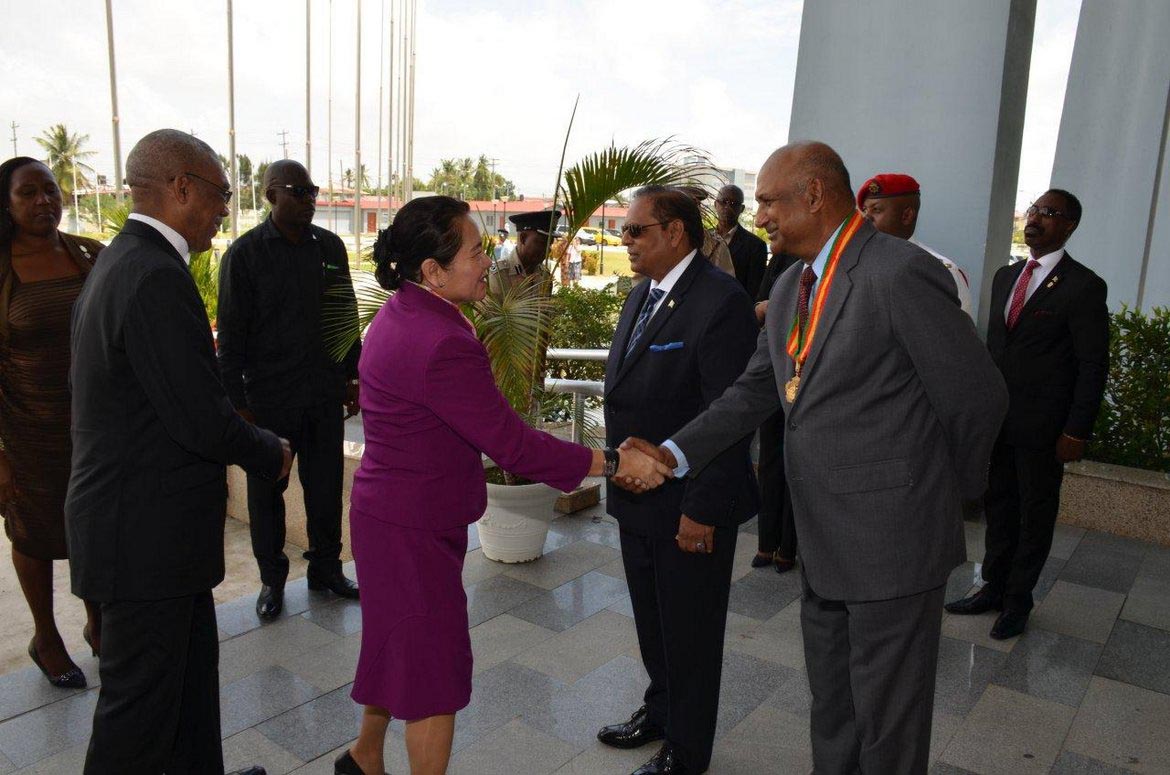 Georgetown, Guyana – (February 23, 2016) Twelve groups were, today, on Guyana’s 46th Republic Anniversary, conferred with the insignia of the Medal of Service by President David Granger at the 2016 Investiture Ceremony, held earlier today at the Arthur Chung Convention Centre.

It is the first time that an Investiture ceremony has been organised to specifically honour organisations and groups for their outstanding service to the nation.

Delivering his address, President Granger, who is the Chancellor of the Orders of Guyana, said that a better day could not have been chosen to confer the awards, since it is this date, 46 years ago that Guyana ended the incongruity of having the Queen of Great Britain as the Queen of independent Guyana.

He noted that the termination of the imperial system provided the opportunity for the initiation of a national system and National awards serve as the supreme symbol of that statehood.

“It is fitting, therefore, that this day – the anniversary of our Republic – should be selected as the day on which the State honours citizens and groups of distinction… They are the greatest gift that a grateful nation can offer. Awards are the embodiment of the spirit of our people; a spirit, which is manifested, similarly, in our National Anthem, our National Flag and our inspirational National Motto – One People, One Nation, One Destiny,” he said.

President Granger and Mrs. Granger being welcomed by Prime Minister, Mr. Moses Nagamootoo and Chancellor of the Judiciary, Mr. Carl Singh upon their arrival at the Arthur Chung Convention Centre earlier today. 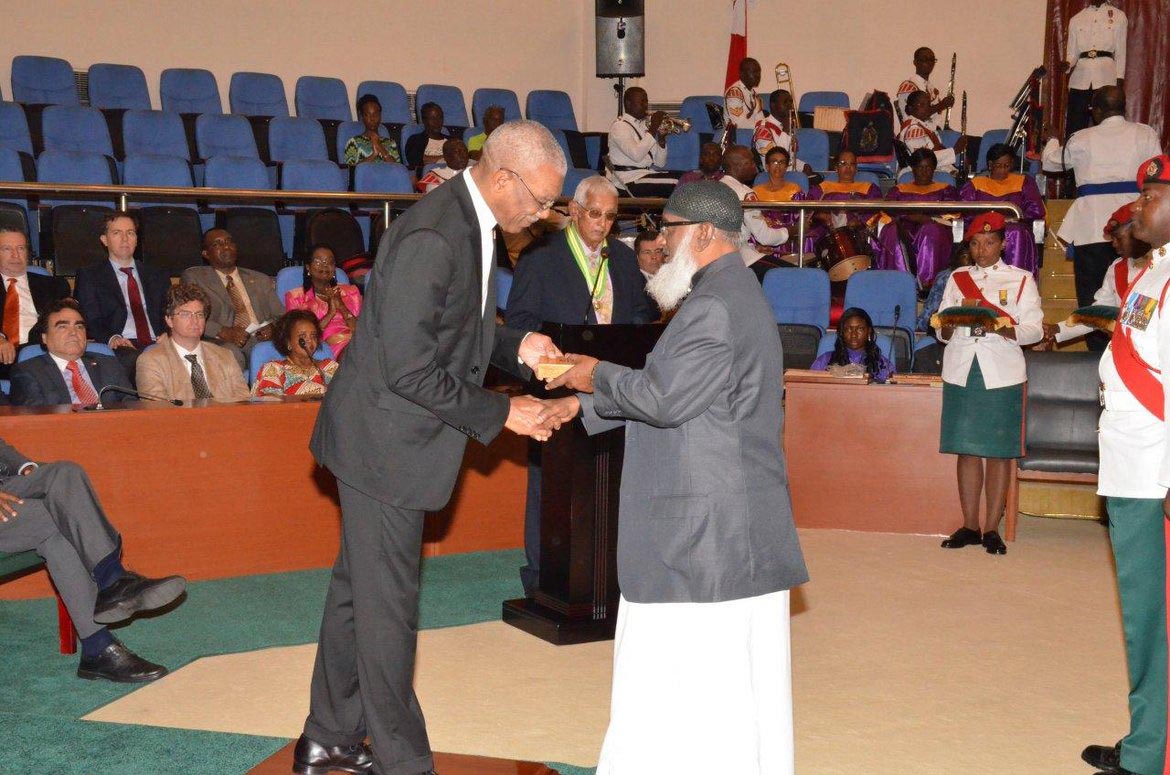 Mr. Mohamod Mujay receives the Medal of Service for outstanding work by the Guyana Islamic Trust in the area of Education.

President Granger noted that National symbols, like National Awards, are ordained by the Constitution of the Cooperative Republic of Guyana, and these should be cherished and never devalued or taken for granted.

“The Medals of Service, which you received will not depreciate with the balance of trade. The parchment with which you have been presented will not disintegrate with age. The acclaim of this congregation is not to be discredited. National Awards constitute an important institution of the state. It is my personal obligation, as Chancellor of the Orders of Guyana, to discharge my duty to our deserving citizens and to pay respect to those to whom respect is due,” he said.

However, the President noted that while receiving an award is a prestigious national honour, it is merely a token that cannot measure the magnitude of selflessness and dedicated service that citizens have given to their country.

“National Awards, it must be iterated, have not been conferred capriciously. They have been ordained by the Constitution of the Orders of Guyana. The Medal of Service, the award of which this investiture ceremony celebrates, acknowledges the achievements of groups – that is, of collectives, cooperatives and communities. The Medal of Service honours associations, corporations, organisations and other groups. Their sacrifice, selflessness, success and service to their communities, country and society have been consistent and of a high quality. The Medal is an acknowledgement of your service,” he said. 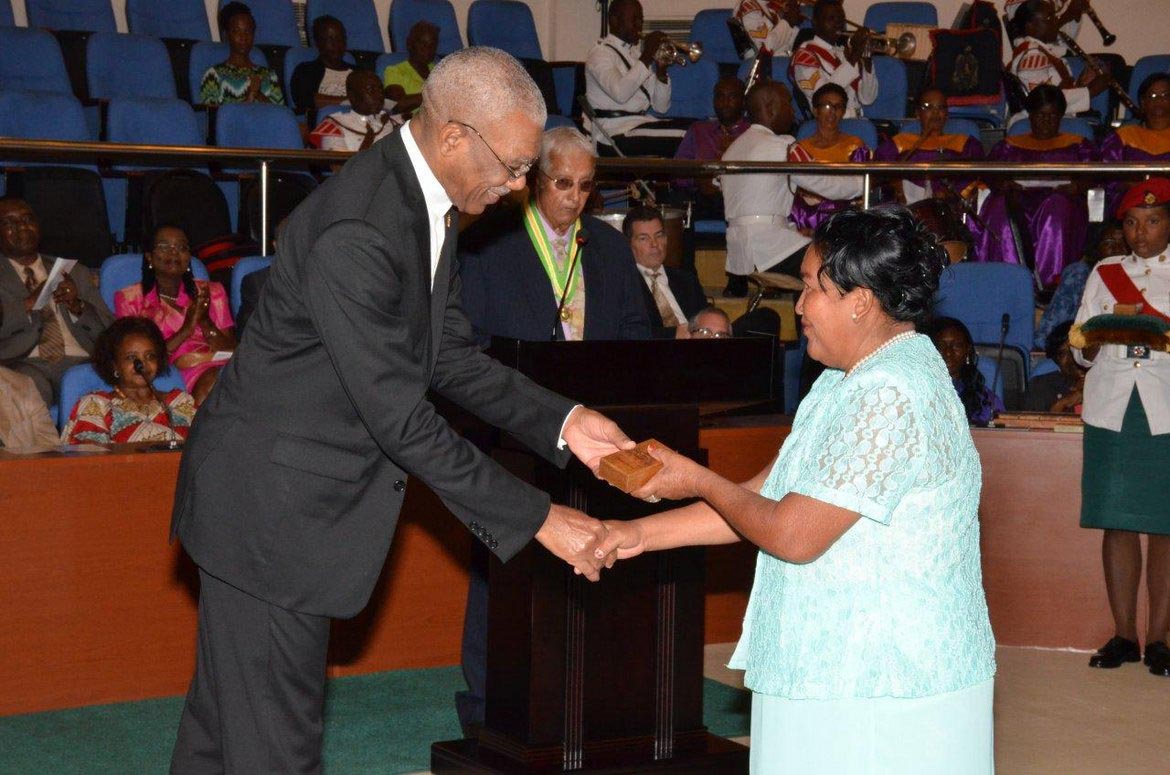 Ms. Bernadette Allicock from the Makushi Research Unit receiving the Medal of Service from His Excellency, President David Granger at this morning’s Investiture ceremony. The group was awarded for its efforts in reviving the culture of the Makushis and the translation and teachings as well as publication of books in the Makushi Language 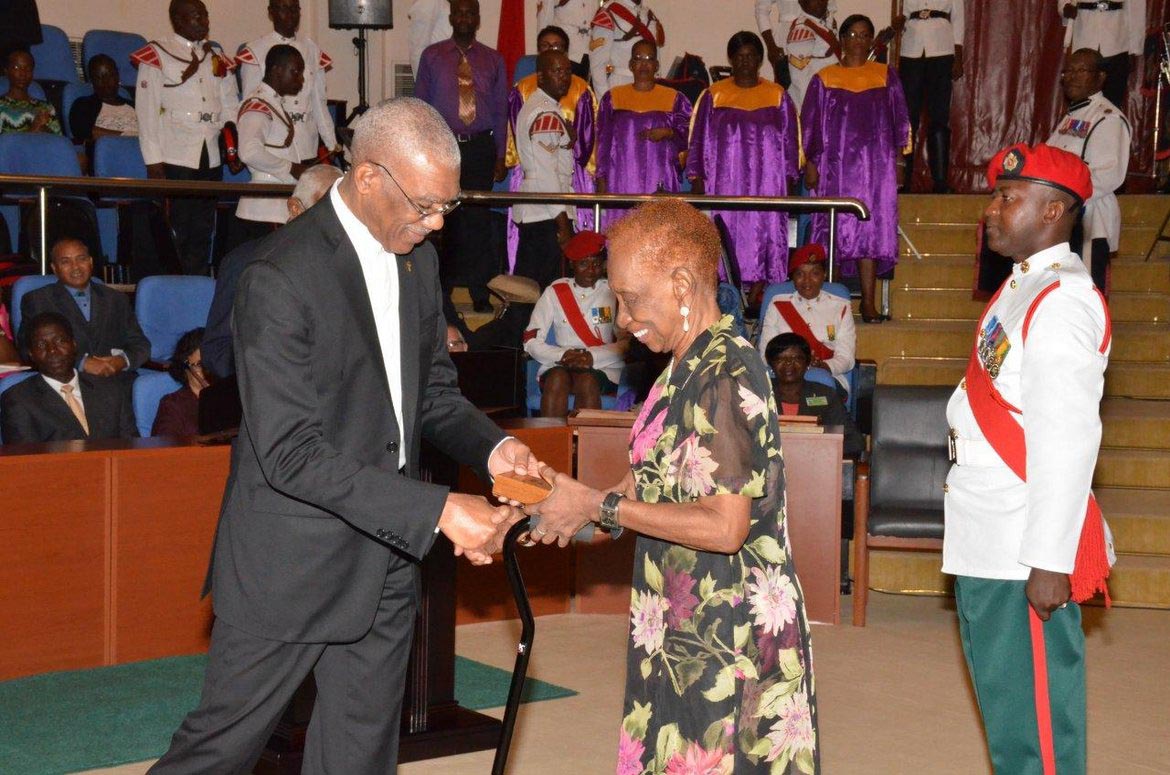 Theatre Guild’s oldest surviving member, Ms. Daphne Rogers is all smiles as the organisation is awarded for its work in the Theatre Arts field.

The President told the groups that the National Awards serve as a reflection of the respect and reverence of a grateful nation, stating that their years of labour and hard work have been noted and recognised.

“We know that you have laboured over a long period of time. These Awards, indeed, were reserved for those who have distinguished themselves in the service of the nation. We applaud your accomplishments. We appreciate the outstanding service that you have rendered. We commend you for your commitment to the common good. Guyana encourages you to continue, through precept and example, to serve your country and community. Civil society and non-governmental organisations are deserving of admiration and emulation by the nation, particularly by young Guyanese. Our nation was built by the combined efforts of our people, political parties, trade unions and cultural, economic, religious and social organisations. We need you to continue your good work,” President Granger said.

Meanwhile, Chancellor of the Judiciary (ag), Hon. Carl Singh, in brief remarks, expressed similar sentiments. He said that the awards are the most tangible recognition of merit that citizens can receive from their country for the exceptional service they have given for the advancement of the nation.

“The development of many countries around the world has been marked by citizens both in the public and private sector. National development is not just measured in economic development. It can be measured by our strides in education, sports, the arts and culture. Today’s investiture ceremony has its genesis in the view expressed by His Excellency, President David Granger that the time is right for Guyana to recognise the efforts of organised groups of Guyana who have made significant contributions to the advancement and development of the nation,” he said.

Mr. Singh said that a transparent selection process was employed, beginning with publications in the press inviting nominations for national awards before the Advisory Committee reviewed and made recommendations.

“The nominations were many. There were really very many but the Advisory committee had little trouble in eliminating the unmerited groups. We are here today to recognise and to honour the selfless, inspirational and commendable service of various groups of Guyanese to the people of this country,” the Chancellor said.

A number of representatives of the awarded groups and organisations, in invited comments, praised the event, noting that it is not only recognition, but also an impetus to continue to render their service to the people of Guyana.

Ms. Daphne Rogers, the oldest living member of the Theatre Guild, received the award on behalf of that organisation. According to her, it is a joy to live to see this day, when the contribution of that group to the Arts and Culture of Guyana is being recognised.

“I feel very, very proud to know that they recognise me and the Theatre Guild. I have worked there since the 1950s and so it is really an honour. It is a rare credit for us. We have been there for a long time. We have been pioneers so we are really proud,” she said.

Mr. Mohamod Mujay, of the Guyana Islamic Trust, which was recognised for its contributions in the field of education and community service, said that the organisation was particularly pleased that its efforts over the years have been noted and appreciated.

“It is a great feeling. The Guyana Islamic Trust has made sacrifices over a decade and a half, in providing services to the people of this country. We have done work in the areas education, social development, and social relief and so we feel proud this morning that we have been honoured. It provides an impetus to us now to continue our work to the Guyanese society. It is an extremely satisfying feeling,” he said.