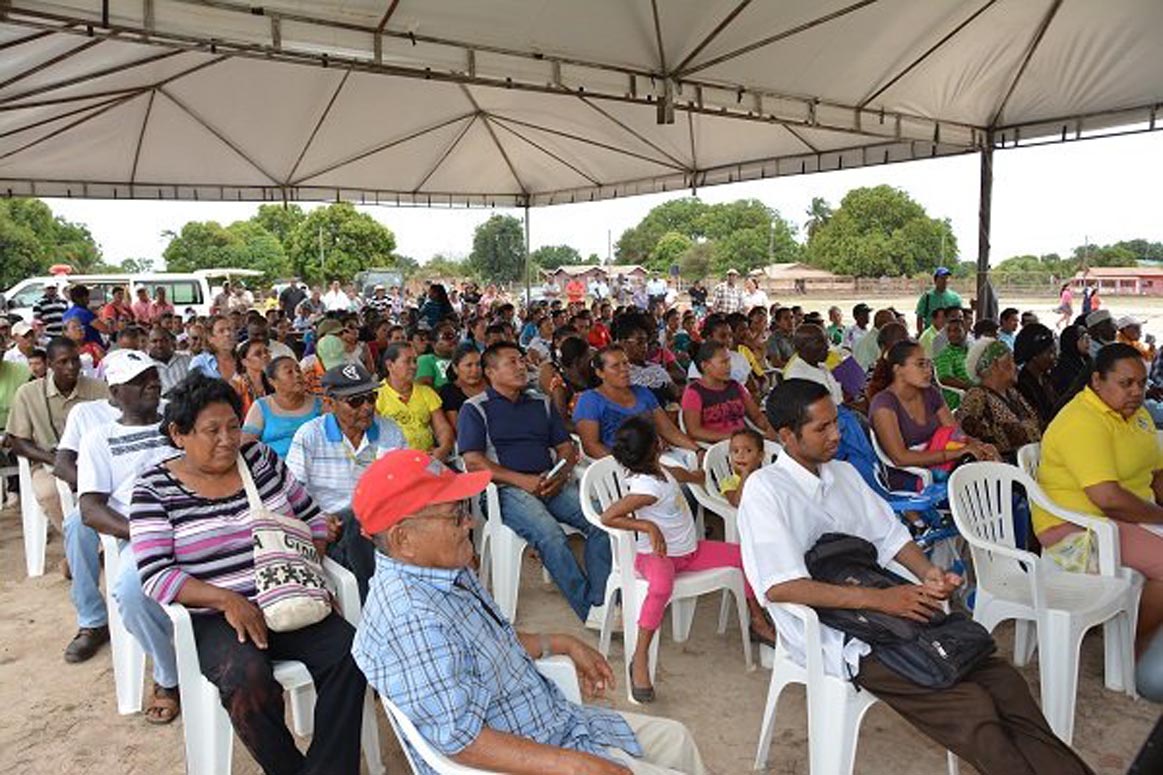 Georgetown, Guyana – (February 21, 2016) Prime Minister Moses Nagamootoo, yesterday, announced a number of ambitious plans, which the Administration has in store for residents of Lethem, Upper Takutu-Upper Essequibo (Region Nine), including plans to pave the Linden/Lethem roadway and launch a radio station for Indigenous communities, at the third ‘Public Day’, held at the Tabatinga Community Ground.

The Prime Minister announced that works on the Linden to Lethem Highway will soon begin, while an industrial zone will be established in Lethem to facilitate the influx of economic activity that is expected to take place once the road has been completed.

Further, he said, the Ministry of Public Security has already started collaborating with the Ministry of Indigenous Peoples’ Affairs to address the issue of gun licenses for Indigenous communities. “I have spoken to the Minister of Public Security and Vice President, Sydney Allicock, for the firearms which were handed in during the amnesty period to be re-issued once the paperwork is completed… We will also look at the way the fees are charged,” the Prime Minister said.

He also added that the Government has plans in train to set-up offices in the Region to facilitate the application process for passports or birth certificates.

A section of the large crowd at the ‘Public Day’ forum held in Tabatinga, Upper Takutu-Upper Essequibo (Region Nine) on Saturday.

Prime Minister Nagamootoo, who was accompanied by his wife, Mrs. Sita Nagamootoo, said the meetings are being held to help realise the Government’s mission to provide a good life for all Guyanese. “Nine months have not even gone since we took office and in these months this has been a feature of the government; reaching out to the people to establish open Government partnerships,” the Prime Minister said.

The Prime Minister led a high-level team of Government officials including Minister of State, Mr. Joseph Harmon; Minister of Public Infrastructure, Mr. David Patterson; Minister of Social Protection, Ms. Volda Lawrence; Minister of Citizenship, Mr. Winston Felix and Minister within the Ministry of Communities, with responsibility for Housing, Ms. Valerie Patterson to the Region to give residents an opportunity to meet directly with the Ministerial team.

Before the start of the meetings on Saturday, Minister Harmon remarked that the Administration is cognisant of the fact that not every individual has the means to meet with officials to have their matters addressed. As such these ‘Public Day’ activities is an opportunity to take the Government to the people. “We have brought the Prime Minister and five [other] Ministers to hear what your concerns are. You voted for a change and you are seeing the change. You have a Government that cares,” Minister Harmon said.

The issue of housing, which has been a major bugbear countrywide, has also been a source of anxiety for Region Nine residents. Residents complained bitterly that under the previous Administration there was a lack of responsiveness to calls to address issues related to housing and land titling. However, Housing Minister Ms. Valerie Patterson, who had pledged to tackle the backlog of house lot applications and address the related housing issues upon her assumption to office, brought relief to residents when she announced that the price for land had been reduced, processed applications on the spot and even allowed residents to select their intended house lot numbers.

One visibly pregnant woman who was the first to pull a lot number was too overwhelmed to offer a comment. However, another resident, Ms. Madela LaRose, who had had the cost for her land reduced by half said, “Last year I was asked to pay $300,000 for the land, but when I looked at the land I was confused because the price didn’t match the size. I can here this morning to clarify this and I am leaving as a grateful woman. 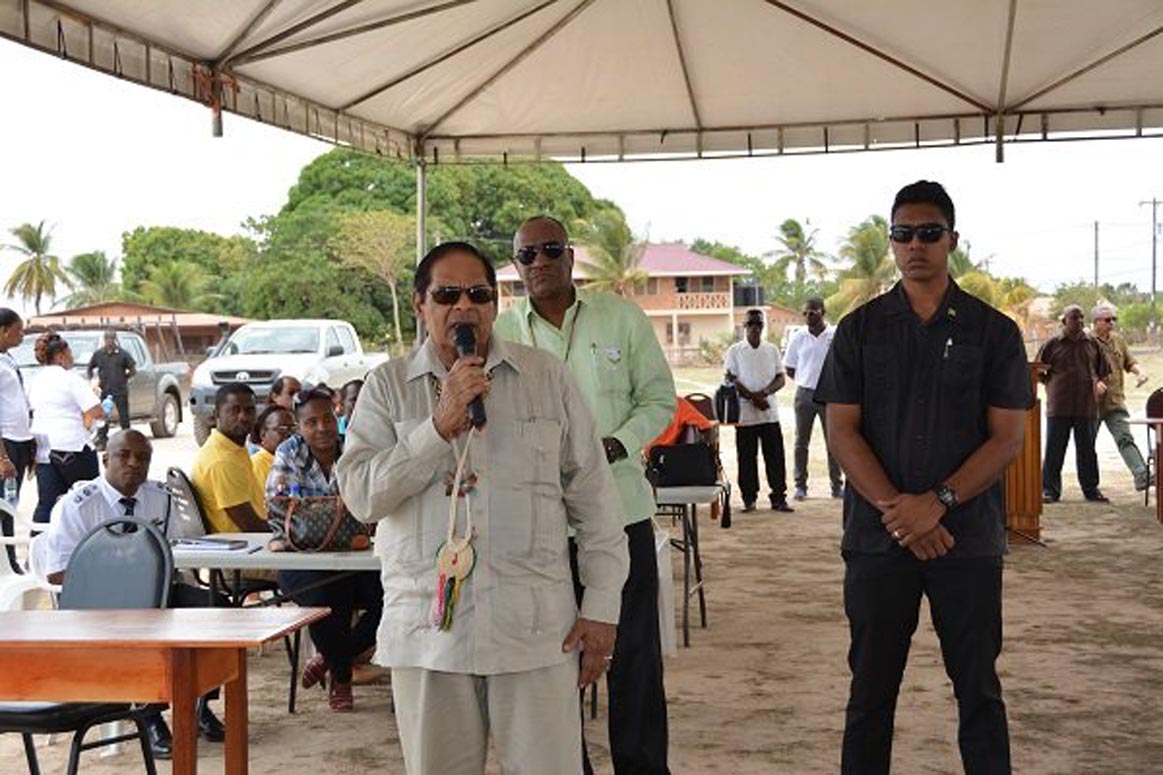 Prime Minister Moses Nagamootoo addresses the crowd at the Tabatinga Community Ground. Minister of State, Mr. Joseph Harmon is pictured behind him.

Ms. Brenda Campbell, a mother of six, said she applied for a house lot four years ago and never received a response. However, yesterday she left the Tabatinga Community Ground, smiling. “I have six kids and I live in a rented house. I want my own home so I applied for a piece of land and up until today, I couldn’t get any response. But I came and I meet the Minister and now I am getting to pick my lot number,” Ms. Campbell said. These women were among the first 47 citizens to benefit from the Government’s revised housing plans.

Meanwhile, Minister of Social Protection, Ms. Volda Lawrence was able to immediately address a case of violation of labour laws, after a woman complained that she was owed pay in lieu of leave. On hearing the woman’s case the Minister sent for the errant employer and was able to recover the $120,000, which was due to the employee.

At the close of the weekend outreach, residents were loud in praise of the activity. Regional Chairman and member of the Opposition People’s Progressive Party, Mr. Brian Allicock, also praised the initiative, noting that such an event with so many Government functionaries had never before been held in the Region. “This is the first time we are having something like this in this region. We must thank this Administration; this government, for this. You will be able to share your views and you do not have to be afraid to speak,” he said.

Regional Chairman and member of the People’s Progressive Party, Mr. Brian Allicock praises the government for taking this unprecedented step to reach out to the people.

This is the third Public Day outreach exercise hosted by President David Granger’s Administration. Supporting officers from the Ministry of Agriculture, the National Insurance Scheme (NIS), the Guyana Water Incorporated (GWI), the Civil Defence Commission (CDC), the Department of Public Service, the Ministry of Public Health, the Central Immigration Office, the General Registrar’s office and other agencies were also on hand to address issues.

The first such exercise was held in January at the Square of the Revolution in Georgetown and the second was held in Perth Village, Essequibo Coast.