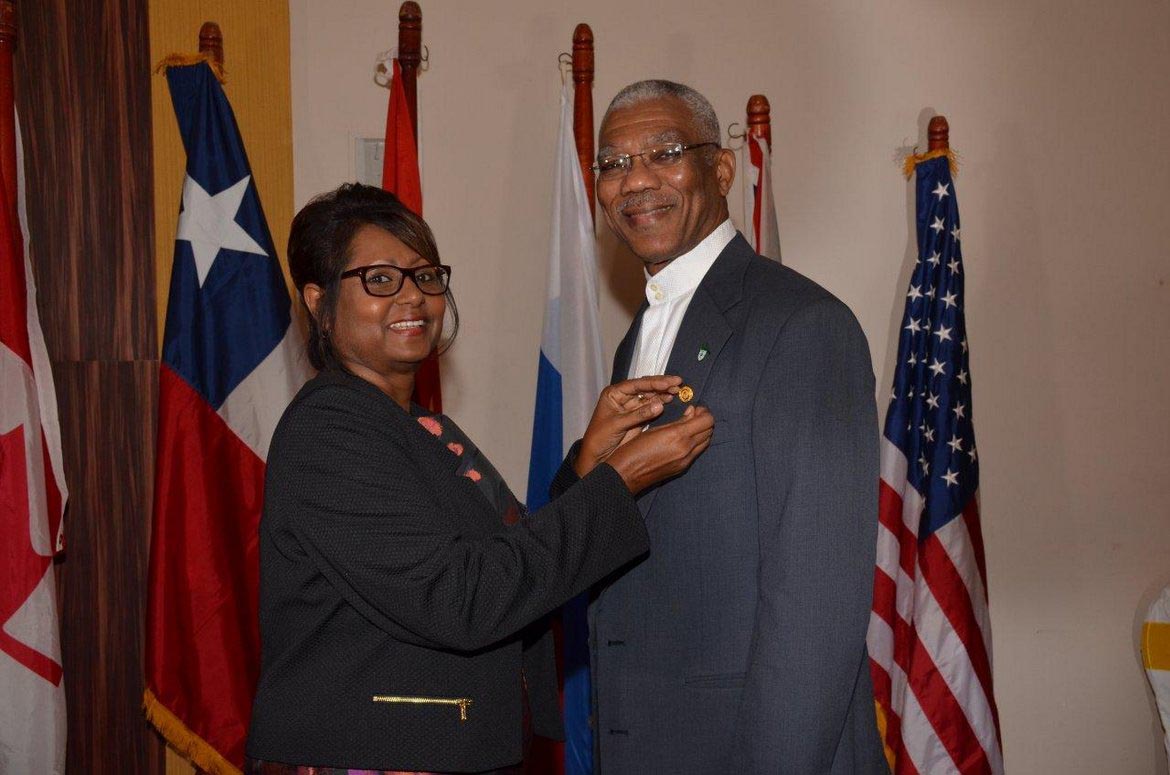 Georgetown, Guyana – (February 13, 2016) President David Granger said civil society groups have a critical role in fostering communitarianism and called on the Rotary Club of Georgetown to lead efforts to instil the virtue of accountability to family and community to build a strong and united Guyana.

President Granger made this appeal in his address at a Fundraising Dinner the Club hosted in observance of World Understanding Month, last night at the Pegasus Hotel.

The President noted that Guyana has a long history of violence and division, but as the country prepares to celebrate its 50th Independence Anniversary, it cannot afford to continue to stagger perpetually on the brink of catastrophe, constantly moving from one crisis to another.

“We need to exhibit the common sense and social cohesion which can ensure a cessation of this senseless divisiveness,” President Granger said.

To this end, he noted that 2016 is Guyana’s “Year of Renaissance” and as such all citizens and civil society groups must stand in solidarity and embrace the ideology of communitarianism, which emphasises an individual’s responsibility to the community and the social importance of the family.

“The solution is effective representation and inclusion… This year is opportune for us to promote the spirit of the community development through partnerships between civil society and government. These will allow us to solve problems while promoting the common good… We believe that, by and large, we can all attain the ‘good life’ we desire. We can work together for the improvement of our communities and the promotion of the good life for all,” the President said.
President Granger noted that civil society, while pursuing its individual interests, generally works to ensure that its efforts are directed toward the broader objectives of society.

“Men and women who comprise civil society are united in a covenant to serve others, to promote strong communities and to solve the social problems that exist in the country. There is too much inequality and poverty. There are too many uneducated persons whose ranks are augmented annually by four thousand drop-outs our primary and secondary schools. There is too much unemployment especially among the uneducated young. There are too many communities which are unsafe owing to crime. Communities are not in a state of collapse. There are, however, in need of change in order to avert decline or disaster,” he said.

The President noted that these problems cannot be addressed by any single group –whether it is a government or non-governmental organisation, but require a collective and cohesive response.

Elections win ‘an opportunity for collaboration’

To this end, the President noted that while the 2015 General and Regional Elections would have brought a new administration into power, his Government is committed to the interests of all Guyanese. As such, the Administration will collaborate with the Opposition, civil society and every other group to ensure that its goal of creating a stronger, healthier, cohesive nation is realised.

“The results of the May 2015 elections, I do not regard as a victory. I see it as an opportunity. For one side to win 207,000 votes and the other side to win 202,000 votes is not a grand victory. Rather, it is an opportunity for collaboration, not conflict; for a contract to cooperate and to understand that working together, not fighting; is the formula of the future,” President Granger said.

On this note, the Head of State proposed a ‘social contract’ which will provide the milieu for major sections of society; civil society, the government, political opposition, trade unions and the private sector, to collaborate on a broad national programme to move the country forward.

“A ‘social contract’ could be the means of combining the talents of a wider constituency and of creating the conditions for social cooperation. The purpose of such a contract would be to reach a broad consensus on the goals of national development, to establish a sustainable institutional architecture and to create effective policy instruments for the achievement of our national objectives. A covenant will allow government and the civil society to combine their resources, become more focused and exert a greater impact on society. Civil society has the experience, expertise and social capital to address most social problems. It will facilitate the pooling of resources to better address the root causes of social problems rather than merely dealing with the symptoms,” the Head of State said.

The President said Guyanese must capitalise on the opportunity the jubilee anniversary provides to revitalise communities and turn them into thriving economic hubs, safer societies, cleaner and greener places and vibrant cultural and social spaces.

Meanwhile, in her address, Ms. Elizabeth Cox, President of the Rotary Club of Georgetown, declared that the policies and agenda of the Club will now be guided by the charge that the Head of State has given.

President David Granger addresses members and patrons of the Rotary Club of Georgetown’s Fundraising Dinner, held earlier this evening at the Pegasus Hotel.

The President was also inducted as a Paul Harris Fellow, during the evening’s proceedings. The Club’s past president, Mr. Errol Cheong said that Rotary bestows the Paul Harris Fellow on a person whose life, in its estimation, demonstrates a shared purpose with its foundation and objectives. President David Granger, he said, exemplifies these qualities and the Club is honoured to bestow the title upon him.

The Rotary Club was started by Paul Harris on February 23, 1905 and is now an international service organisation, which brings together business and professional leaders in order to provide humanitarian services, encourage high ethical standards in all vocations, and to advance goodwill and peace around the world.