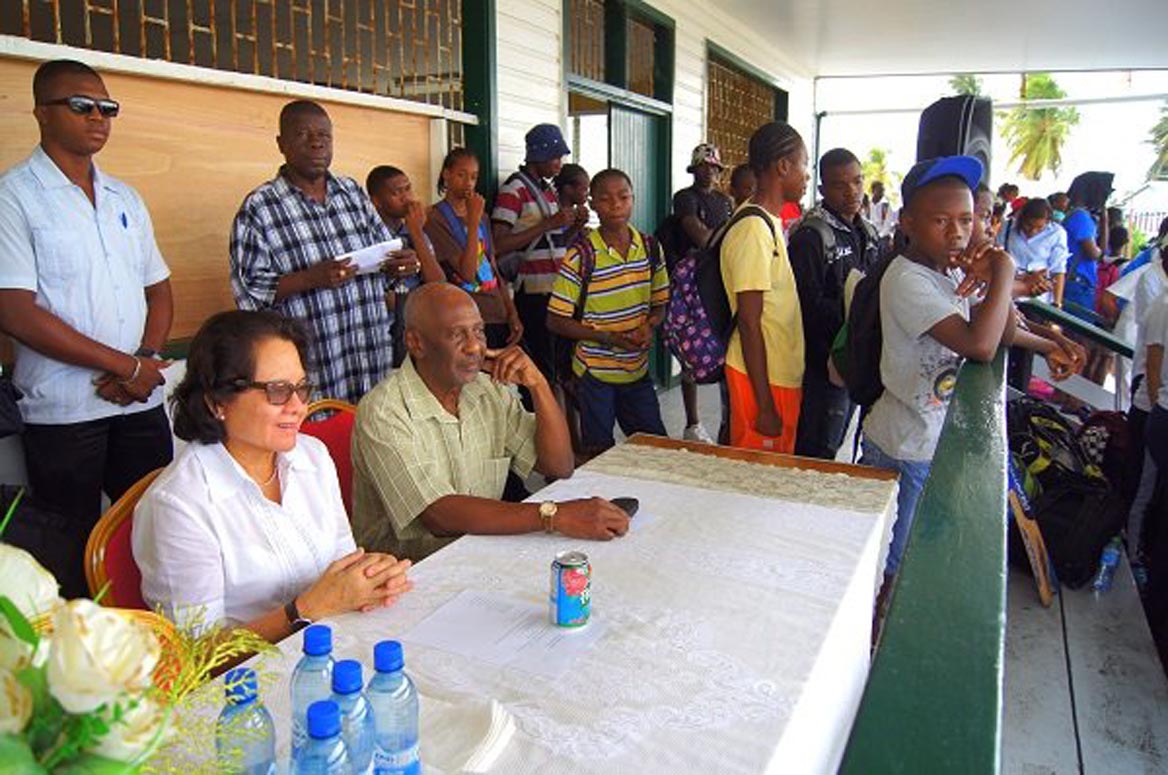 Before declaring the ‘Day of Sports’ open, Mrs. Granger encouraged the participants to have fun, noting that even during this exercise they will be acquiring negotiation and team-building skills that will help to inform their characters.

“I think this is a very laudable exercise because it is bringing together school children from Plaisance to Victoria, East Coast Demerara… I believe that students need a break from their studies now and then to get out, exercise and enjoy comradeship. I want to encourage you to put your hearts into the games, enjoy the friendships and comradeship and be the best that you can be,” Mrs Granger said.

First Lady, Mrs. Sandra Granger and Minister within the Ministry of Social Protection, Mr. Keith Scott  focus on a cricket match between two schools participating in the ‘Day of Sports’ exercise for East Coast schools.

Minister within the Ministry of Social Protection, Mr. Keith Scott echoed these sentiments.

“We are going to use sports to be a builder of society. When you are involved in sports, you build friendships, relationships and team spirit and team spirit can lead you to nation building and that is what we need at this time,” Minister Scott said.

James Lewis, Chairman of the Plaisance Main Road Committee Group, who spearheaded the activity, in an invited comment, said that after reading in the press about the many anti-social behaviours young people were engaging in, he decided to take action to address it.

“There were so many negative things about our young people in the newspapers; from suicide to other things. So I decided to come together with my Committee members to organise a ‘Day of Sports’ for our children and talk to them [and encourage them to be positive role models], Mr. Lewis said. 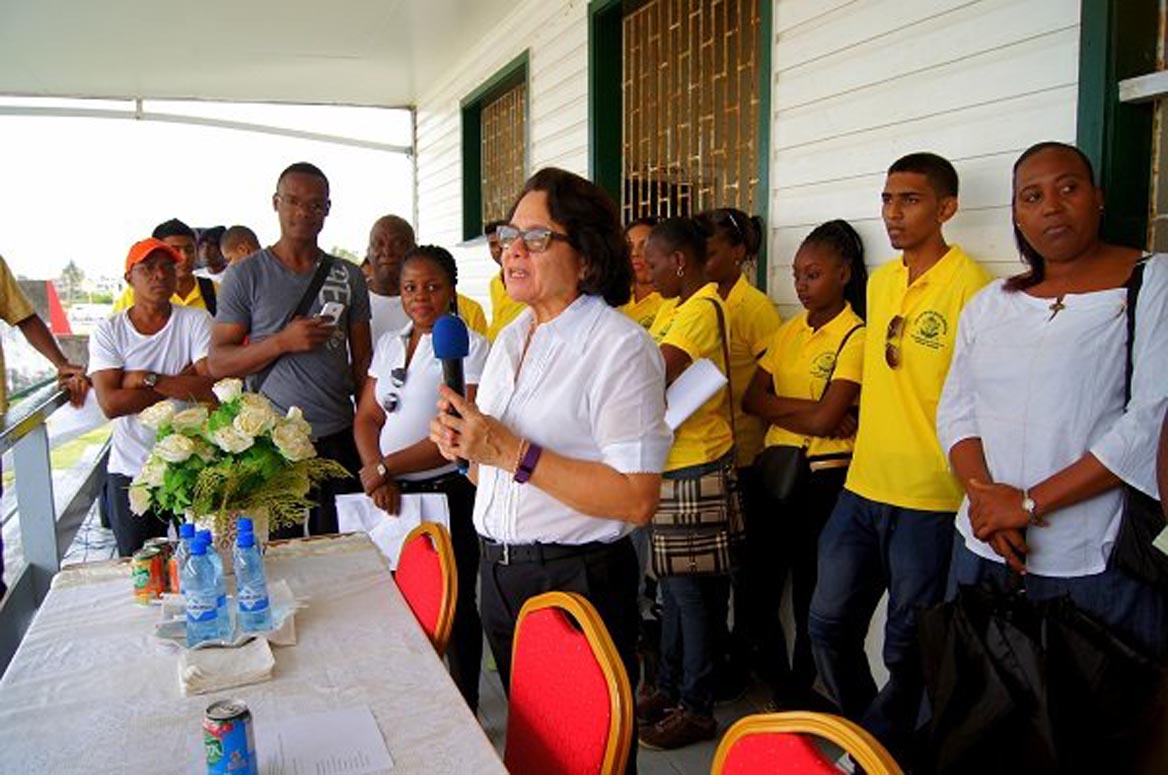 Students and other participants in the ‘Day of Sports’ pay keen attention to First Lady, Mrs. Sandra Granger as she delivers the charge before the start of activities at the Better Hope Community Centre Ground.

The ‘Day of Sports’ roster included a number of competitive games and other recreational activities and at the close, the students will be engaged in an interactive session for discussions on suicide and other topics.

Despite the inclement weather, students from President’s College, the Institute of Business Education, Cyril Potter College of Education and other schools turned out in their numbers for the event. Their efforts during the games were met with resounding applause; with winners celebrated and runners-up consoled. Overall, the students seemed to delight in the activities, especially the inter-school cricket matches. 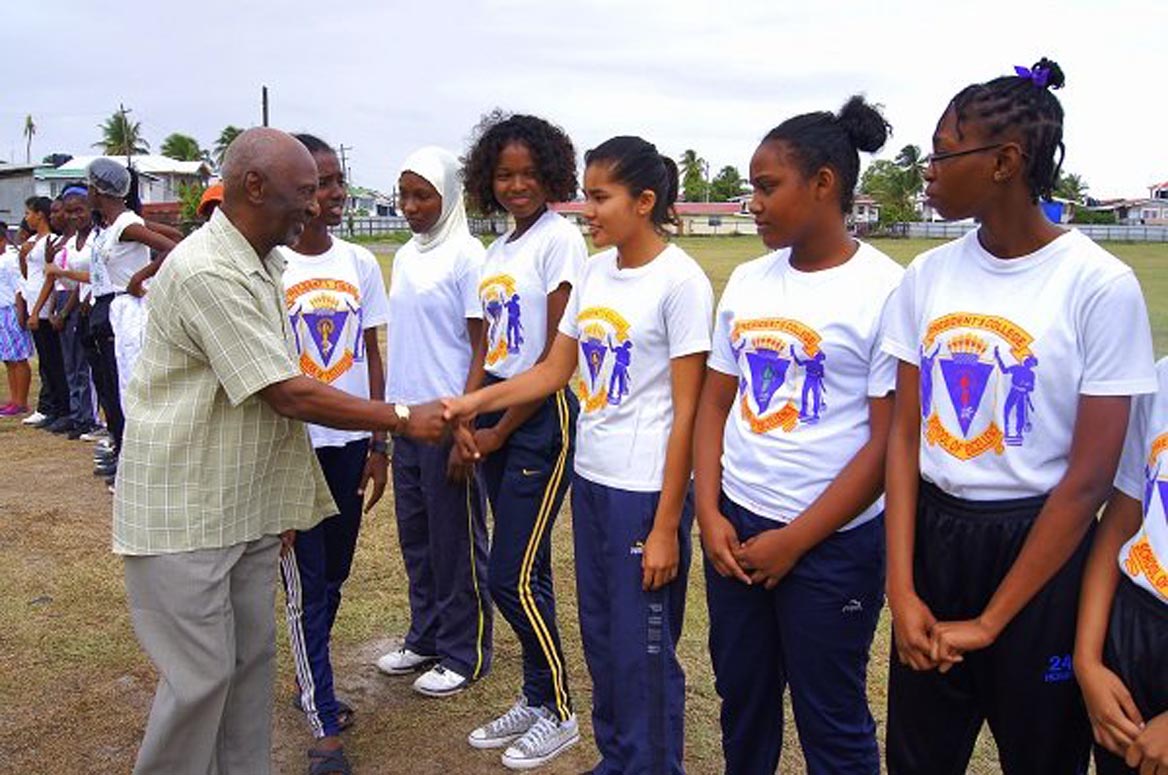 Minister within the Ministry of Social Protection, Mr. Keith Scott greets members of the President’s College Ladies Cricket team just before the start of the games.