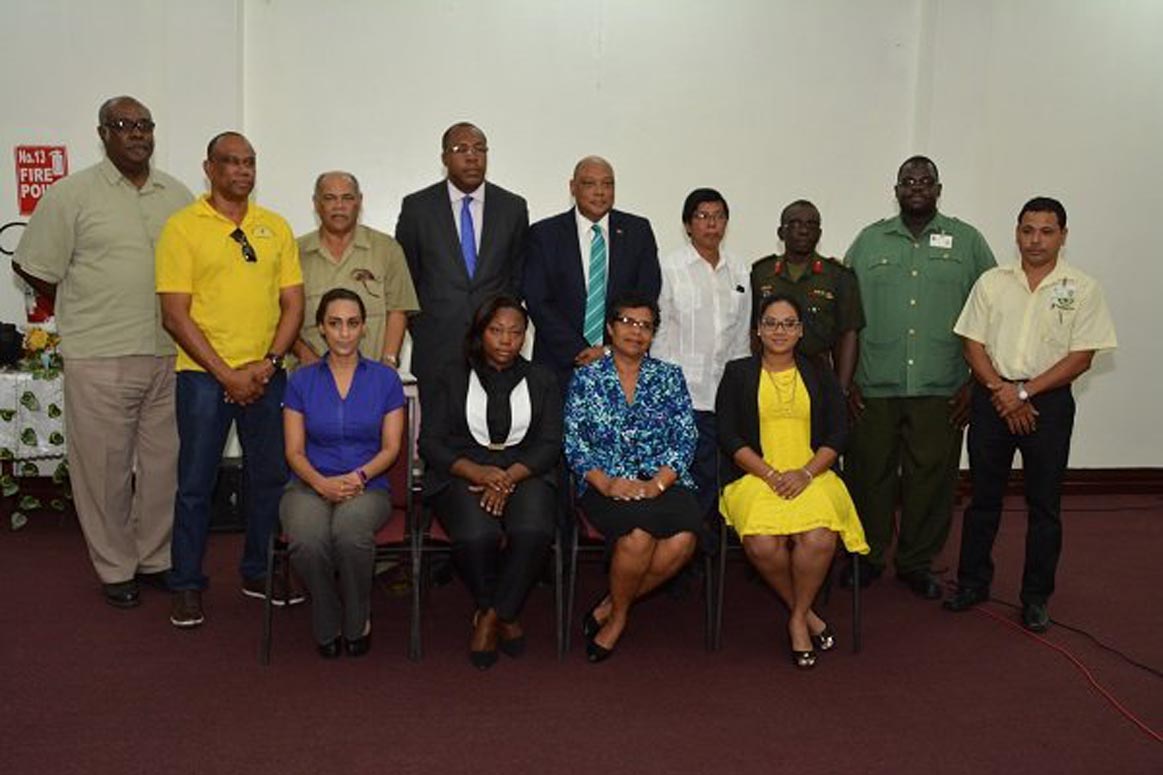 Georgetown, Guyana – (February 12, 2016) Minister of Natural Resources, Mr. Raphael Trotman, today, charged the newly inducted Chairman and Board members of the Guyana Geology and Mines Commission (GGMC) to tackle the more demanding challenges hindering the Mining Sector and to develop a robust Mining Policy Framework to inform its long-term development.

The new Chairman, Mr. Stanley Ming and Board members were installed at their first official meeting for the year, and induction ceremony, in the Conference Room of the National Library. The 15 Board members and five observers, who represent the various stakeholders within the Mining Sector were introduced to the public at the ceremony.

Minister Trotman thanked the new inductees for not only agreeing to serve the Commission but the country, even as he expressed optimism that this Board can deliver the change that is needed. In giving his address to the members, he pointed out that the Mining Sector is undoubtedly one of the principal engines of economic growth in Guyana. Gold declarations for 2015 reached 451,490 ounces, far surpassing its target and contributing more than US$500 million to Guyana’s economy. At the same time, the Minister said there are still a number of challenges hampering the sector that must be fixed forthwith to realise its true potential.

“What is required, above all else, is a willingness to face squarely some of the difficult questions concerning this sector’s development. We know that we need to develop an overarching and robust mining policy framework that will position mineral development on the right track for the long term, followed by consistency and clarity in applying the framework in the years to come,” Minister Trotman said.

Against this backdrop, he laid out the mandate to the Board which he affirmed will include but not be limited to reviewing the organisational and management structure of the Commission itself. The Board will also be tasked with selecting and appointing a new Commissioner for the Guyana Geology and Mines Commission and will be expected to put great emphasis on Occupational Health and Safety. “We are losing too many people to mining accidents,” Minister Trotman said.
Other issues the Board is charged to address include making available higher yielding lands for all categories of miners, improving the use of modern technology within the sector, removing the use of mercury in recovering precious metals and addressing the issue of mining on Amerindian titled lands. Minister Trotman also charged the Board to work with the mining school to make the curriculum more relevant to the everyday demands of the Mining Sector.

“We also expect the Board to renew its focus on rare earth minerals…this is also very important. [With regard to] the protection of the environment, pay keen attention to it; to too many miners – most miners – are literally just causing damage and moving on,” Minister Trotman said.

The Board is also expected to review and revise the Mining Act and Regulation. This will see the Board working closely with the Guyana Women Miners Organisation, the Guyana Gold and Diamond Miners Association and other stakeholders. In addition, the Minister called on the Board to revitalise the “Hearing Officer” forum which appoints persons to listen to complaints from miners, increasing their chances of receiving speedy redress.

Meanwhile, new Chairman of the Board, Mr. Stanley Ming said he is pleased to be afforded an opportunity not only to serve the Board but his country. “We, as a nation and as a people, [know] what our respective roles are and [we will]… do it to the best of our abilities,” Mr. Ming said.

Minister of Natural Resources, Mr. Raphael Trotman (centre, standing), Chairman of the GGMC Board, Mr. Stanley Ming, (fourth from right) Acting Commissioner of GGMC, Mr. Newell Dennison, (first, left) and some of the other Board members at the installation ceremony this morning.

The new Chairman also said he has no intentions of imposing his view and ideas on the Board members, but is committed to working with the experts for the best of all Guyana and more specifically for those in the Mining Sector. “Our job as a Board for the GGMC is to unshackle; to give them the tools, to give them the authority, to give them the support to do the things that they know they need to do to make their organisation function to the best of its ability,” Mr. Ming said.

New Chairman of GGMC Board, Mr. Stanley Ming addresses the Board members.