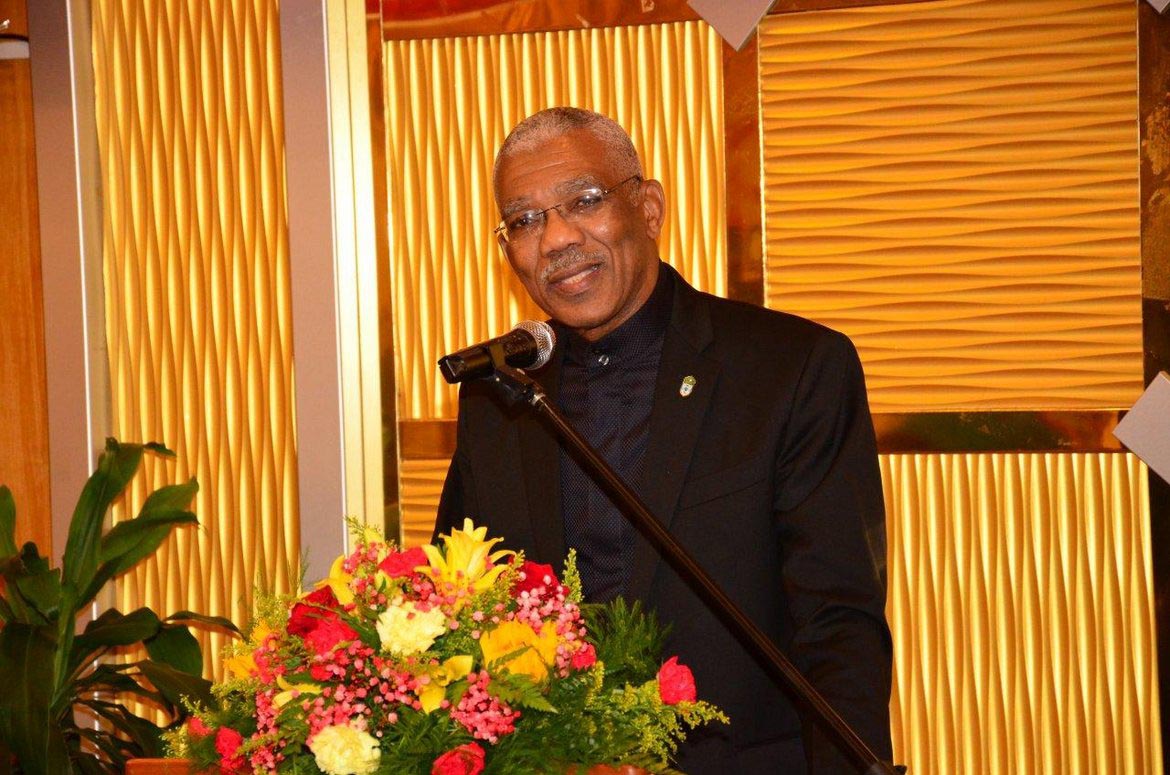 Georgetown, Guyana – (February 3, 2016) President David Granger, this evening, reaffirmed his Government’s support to the People’s Republic of China, noting that the long history and interaction between the two nations has been one of the most fruitful since the formalising of relations 43 years ago.

Speaking at the celebration ceremony of the Spring Festival to welcome the Chinese New Year, which was held at the New Thriving Restaurant, President Granger said that the Government of Guyana is pleased to reaffirm the value it places on the long-standing ties of “blood, history and friendship” it shares with the People’s Republic of China.

“Chinese nationals first came to Guyana 163 years ago and many of them, after serving their period of indentureship, made our country their home. The Cooperative Republic of Guyana and the People’s Republic of China have enjoyed close and cordial relations for the past 43 years (June of 2016 will mark 44 years) having established diplomatic relations on June 27, 1972, eight months after the Cooperative Republic of Guyana lent its support to the vote in the United Nations General Assembly which recognized the People’s Republic of China,” President Granger said.

President David Granger giving his address at the celebration to welcome the Chinese Spring Festival, held at the New Thriving Restaurant last night.

He further noted that relations between the two nations have progressed in recent times with the signing of a number of cooperation agreements in the fields of infrastructure, health, river transportation, energy, culture, education and information technology.

“The healthy relations and partnership developed between the Cooperative Republic of Guyana and the People’s Republic of China has facilitated the deepening of economic partnerships between the two countries, particularly since the turn of the century when China’s spectacular economic growth began,” the President said. 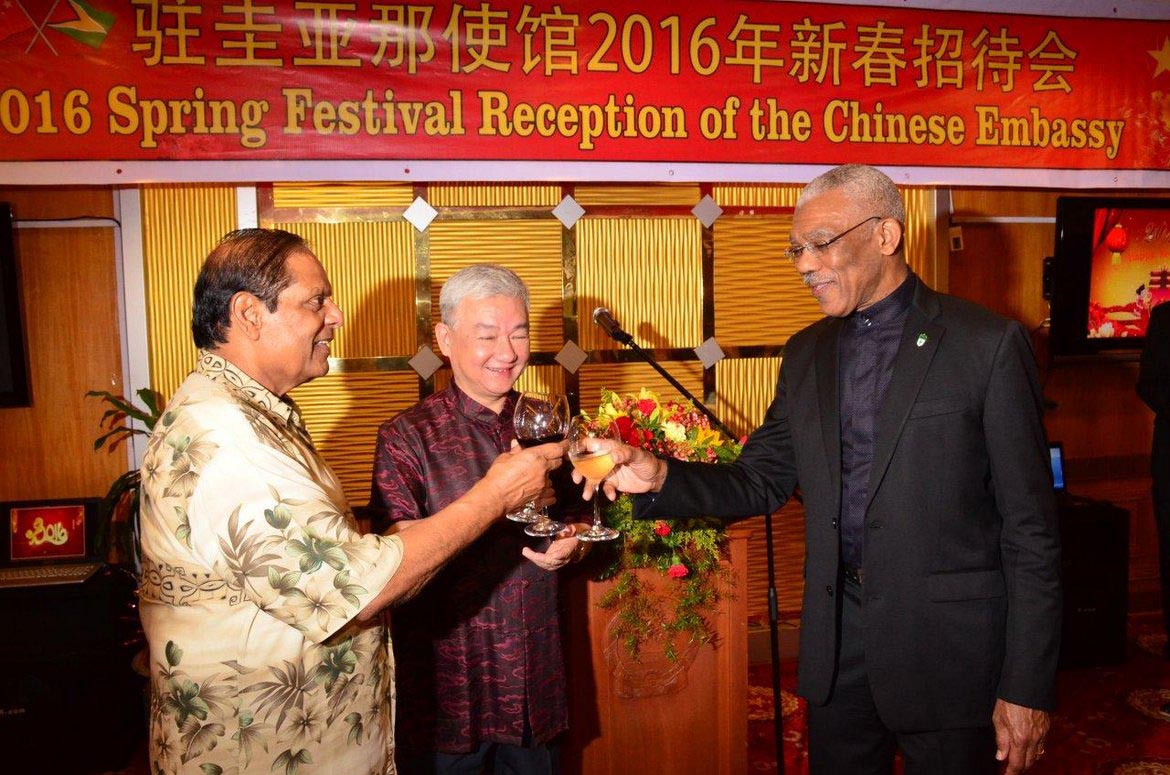 President Granger asserted that the economic performance of the People’s Republic of China remains a source of inspiration to the Cooperative Republic of Guyana with Guyana being a beneficiary of China’s increased growth and trade.

According to the President, China invested at least US$180 million in Guyana in 2013, while it has some US$3B in concessionary financing for eight Caribbean nations. “It also pledged US$ 250 billion in investment for the countries of the Community of Latin America and the Caribbean (CELAC). China has also committed to achieving a trade volume of US$500 billion with these countries by the end of 2019,” he said.

Guyana looks forward to deepening its relations with China; in the creation of lasting economic partnerships and building on the solid relations of the past, the President said.

Noting that this is the year of the monkey, which is known to be smart, agile, dexterous, active, sprightly and curious, the President said that these are all qualities that are needed, particularly by small countries, to further their development in the context of daunting global economic challenges such as a declining commodity prices, the effects of climate change and reduced developmental assistance from traditional sources.
“Economic agility and adaptability, greater ingenuity, exploring new economic horizons and livelier business activity cemented under economic partnerships with friendly and supportive countries, such as the People’s Republic of China, will allow small economies to become more resilient and to circumvent the pitfalls associated with those challenges. The Cooperative Republic of Guyana is therefore keen to deepen the economic partnership with friendly countries for our mutual benefit,” he said. 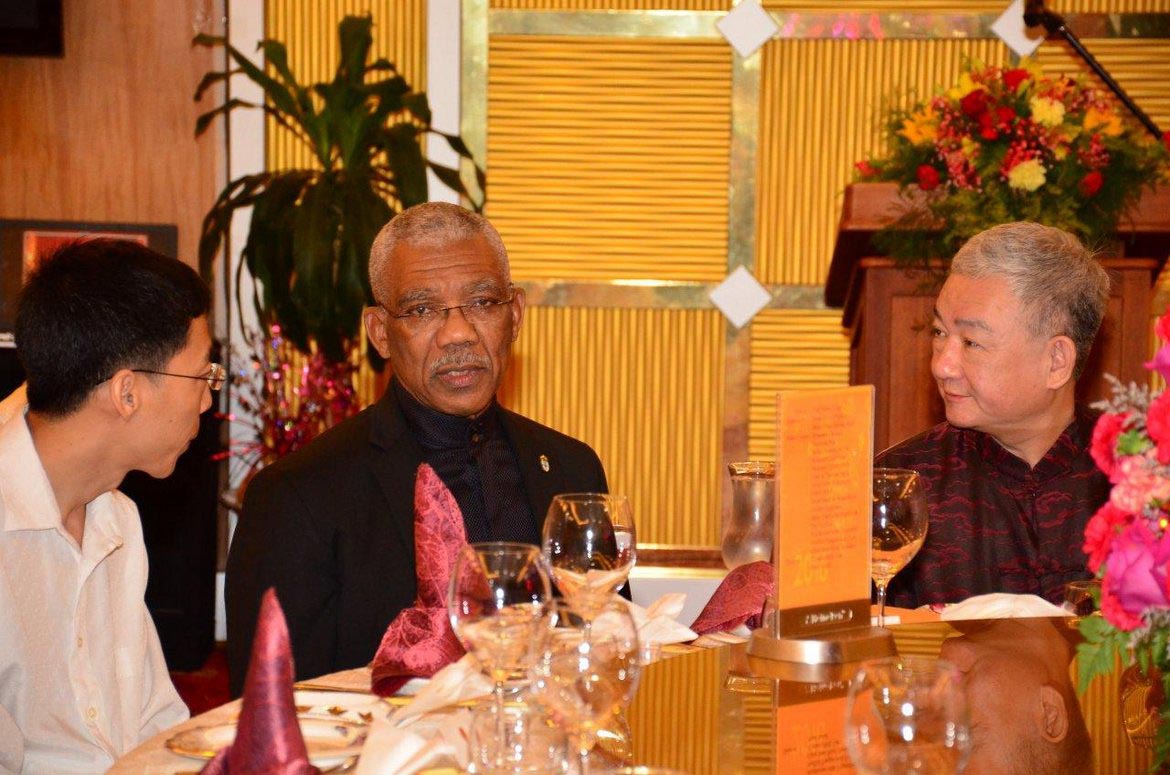 Meanwhile, Chinese Ambassador to Guyana, Mr. Zhang Limin, said that the relationship his country shares with Guyana has been successful over the years. Many Chinese have been able to secure their livelihoods in Guyana because of its hospitality and openness to foreign investment, he said. Ambassador Limin also spoke about Guyana’s vast potential and China’s respect for this nation, adding that his Government hopes that relations between the two can be deepened to the continued benefit of both peoples.

“The Chinese Government places at high importance, the relationship with Guyana since the establishment of diplomatic ties in 1972. Thanks to continuous efforts on both sides, the China-Guyana partnership has been a long and steady one,” Ambassador Limin said.

To date, the People’s Republic of China has made available a number of financing opportunities for key projects as well as scholarships and grants, which can only serve to benefit Guyana, the Chinese envoy said.