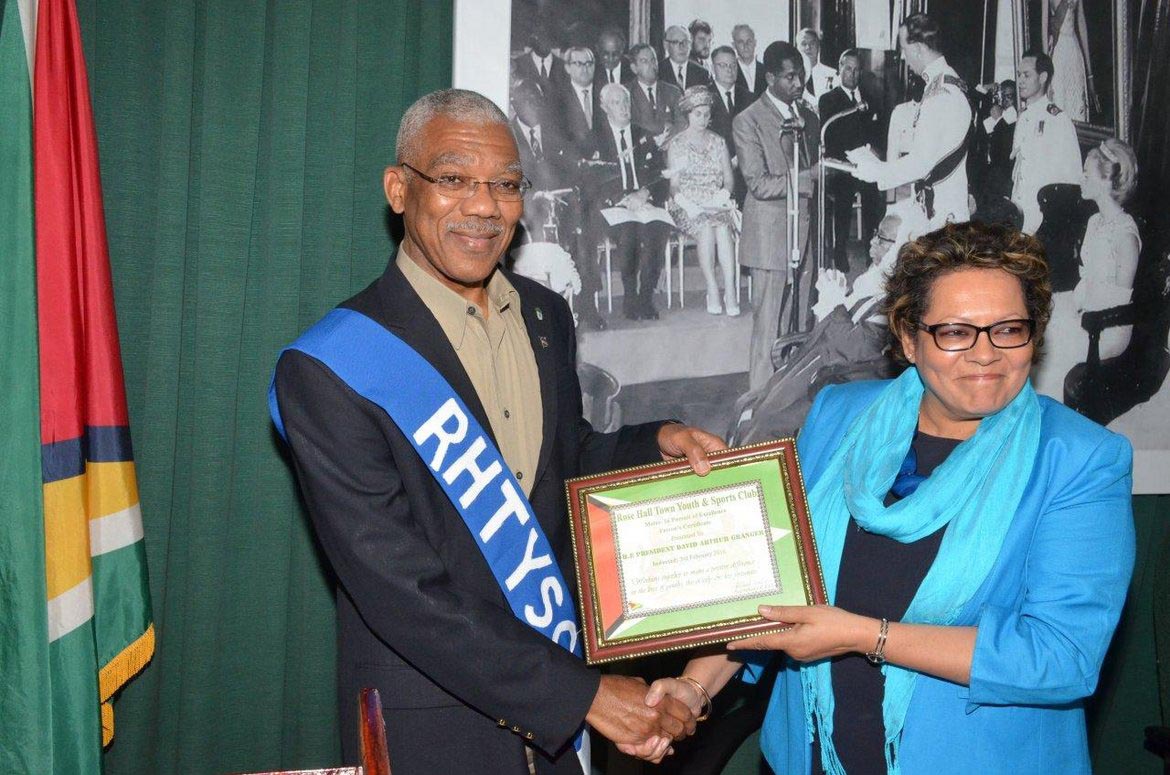 Georgetown, Guyana – (February 3, 2016) President David Granger was inducted as the new patron of the Rose Hall Town Youth and Sports Club (RHTYSC), today in a small ceremony at the Ministry of the Presidency. During the ceremony, the President said that the club can be used as a model for youth clubs countrywide.

As the new patron, the Head of State joins ranks of late former President, Mr. Desmond Hoyte, who was the Club’s first patron. Outgoing patron, Managing Director of Ansa McAl, Ms. Beverly Harper was on hand to induct President Granger.

RHTYSC, which was established in 1990, has made a name for itself nationally, regionally and internationally. The services it has provided for youths, the elderly and less fortunate has resulted in it receiving numerous prestigious awards from the Commonwealth, the International Olympics Committee, Guyana Cricket Board and the Berbice Cricket Board.

Speaking at the induction ceremony at the Ministry of the Presidency, President Granger commended brothers Hilbert and Alex Foster, who manage the organisation, for their leadership in the Club, the community and the nation.

“The Rose Hall Town Youth and Sports Club is now a national icon. You are [the] treasure of Guyana and in this our 50th anniversary year, I am very happy to have the honour of being your patron,” President Granger said.

The President further said that Guyana can benefit from more organisations like the RHTYSC, which can be used as a model to develop similar youth clubs in Bartica, Mahdia, Lethem and Mabaruma, which have all been earmarked for township.

In response, the Club’s Chief Executive Officer, Mr. Hilbert Foster, said that the Club stands ready to assist other communities to develop youth clubs. “Our formula is sheer hard work, unshakable faith in the God we serve, honesty and belief in the work we do,” he said.

Meanwhile, outgoing patron, Ms. Harper, said that her involvement with the Club over the last five years has been a humbling experience.

To date, the RHTYSC has completed a total of 6000 projects to benefit youths, the elderly and underprivileged. This year it has set a target of 300 projects, to be completed by December, to address crime, suicide, drug abuse and other social issues.