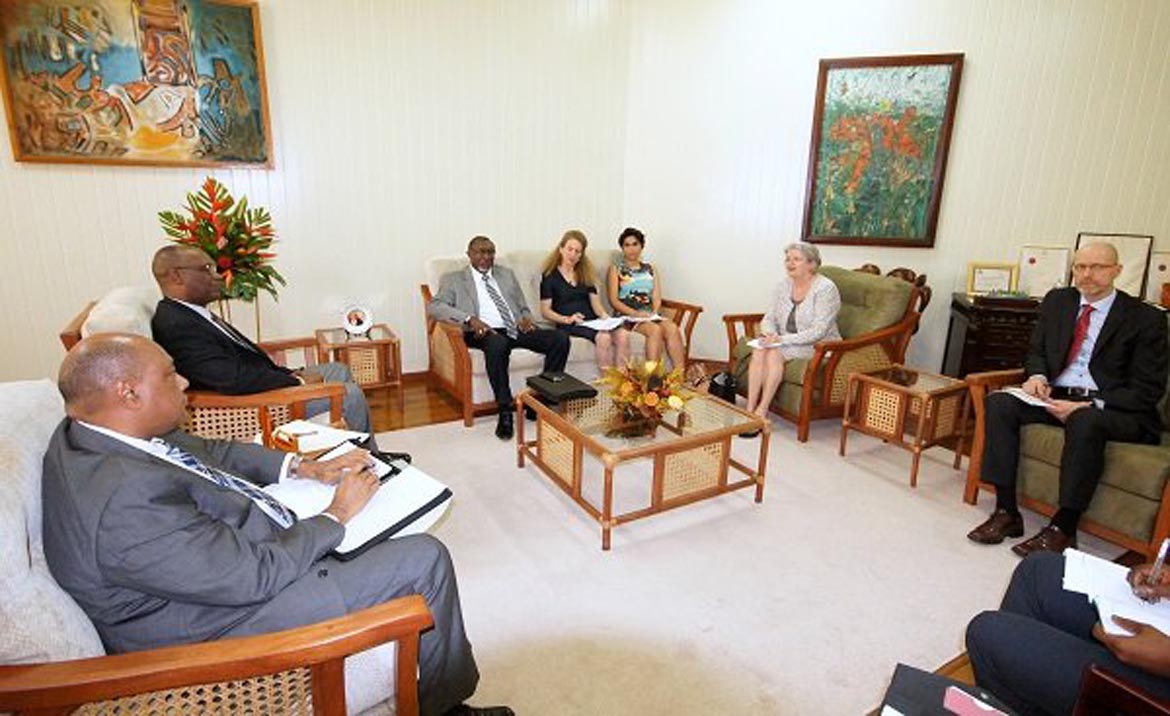 Georgetown, Guyana – (January 28, 2016) Minister of State, Mr. Joseph Harmon and Minister of Natural Resources, Mr. Raphael Trotman, today, met with a delegation from the Kingdom of Norway to discuss the way forward with regard to the Guyana-Norway agreement for avoided deforestation.

Minister Harmon explained that the Government has only been in Office for eight months after being in Opposition for 23 years and as such, there are issues that need to be ironed out, particularly as it relates to agreements that were made by the previous administration. However, he noted that the administration is interested in continuing the climate agreement between Guyana and Norway, which was signed in 2009 by the previous government.

Minister Trotman expressed similar sentiments, while pointing out that Guyana is committed to continuing its partnership with Norway because it is a model that will allow the country to develop renewable energy technologies, while sustainably exploiting Guyana’s natural resources.

In this regard, the Minister is expected to lead a Guyanese delegation to a follow-up meeting with his counterpart in Norway, later in the year, with a view to negotiating a new Memorandum of Understanding (MoU).

With regard to Guyana’s efforts to maintain its pristine forests, Minister Trotman said that while the Government does not intend to abolish logging and mining, it is committed to ensuring that these activities are done sustainably.

“We are not going to open new lands, we have a set acreage and as miners relinquish [them], we reassign [them]. We will ensure that there is a healthy balance between protection of the environment and sustainable mining. We do a fairly good job of maintaining the forest cover… we have clamped down heavily on logging by Chinese companies. This has come to a minimum and I did put a ban on the export of logs, [which] was sufficient to curtail the large-scale cutting of logs that was previously taking place,” Minister Trotman said.

Meanwhile, Ambassador Wiig said that Norway understands and appreciates the challenges of new Government in getting acclimatised. She also commended the country for preserving its forests.

The Ambassador also inquired about the Government’s position on the Amaila Falls hydropower project, which was a large component of the Guyana-Norway agreement.

Minister Trotman informed the Norwegian envoy that the Amaila project was never taken off the agenda.

“Amaila Falls can and should produce energy for Guyana, but at the cost of US$1B for 160 megawatts we didn’t believe that we were getting the best deal. We are committed to hydro, we are committed to Amaila, but we were not committed to that financial model that Sithe Global and China Railway had presented,” he explained.

Meanwhile, Senior Adviser in the Department of Climate, Energy and Environment in Norway, Ms. Hege Ragnhildstveit, said that Norway is fine-tuning the details for a consultancy firm to commence a new feasibility study, with regard to the Amaila project.

The prospects of oil and the establishment of a comprehensive land commission before the end of the first quarter of 2016 were also discussed during the meeting.

New State Board members called on to assume ‘one team’ approach

Social Cohesion Ministry, Caring for Others reach out to vulnerable families in Region 5