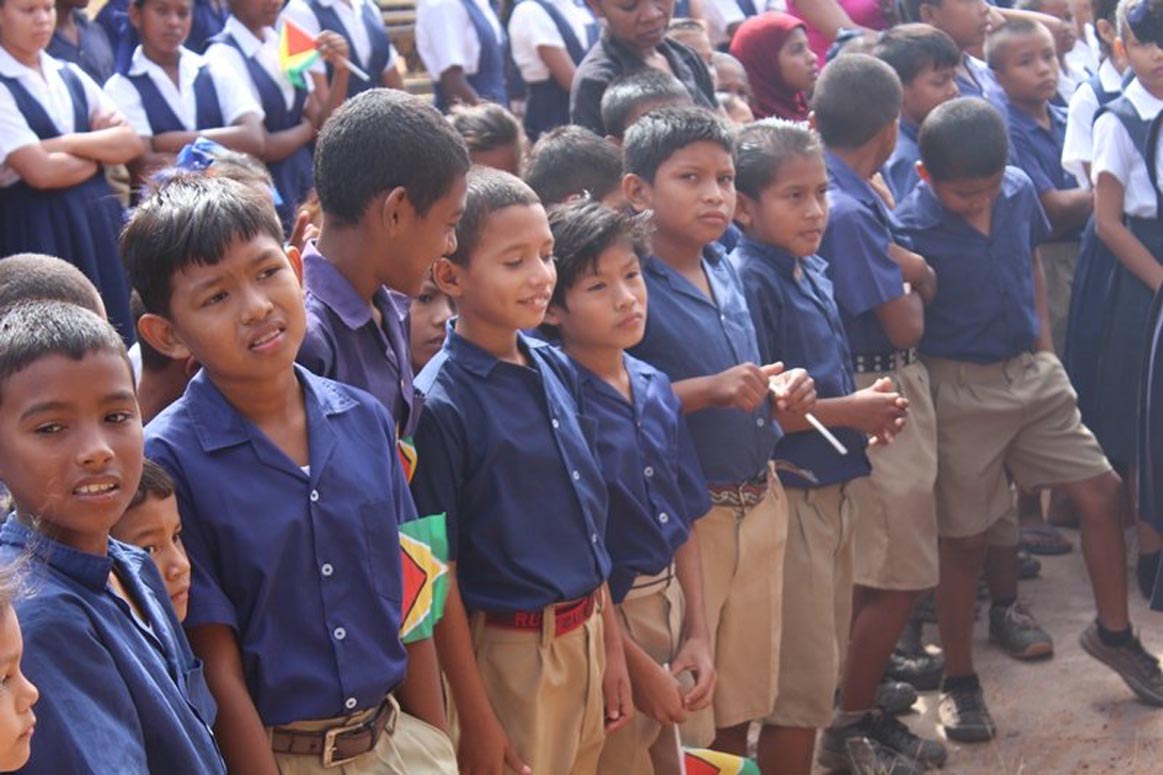 The project which is spearheaded by Mrs. Granger in collaboration with Mr. Ernie Ross, Guyana’s Consul General in Trinidad and Tobago under the ‘Rethink Initiative – Kind Soles Project’, started after he saw a photograph in a magazine depicting children in the hinterland areas going to school bare feet. The project targets 30,000 hinterland students.

The initial tranche of the donation was dubbed “the shoes that grow” as the shoes were expandable and were estimated to last each child about five years. So far, students in Region One (Barima-Waini), Region Nine and those residing at the Amerindian Hostel in Georgetown have benefited from this gift.

Some of the students of the Arapaima Primary School queue-up to receive their brand new shoes.

Ministry Ally, in presenting the shoes to the students of the Arapaima Primary, Arapaima Secondary, Culvert City Nursery and the St. Ignatius Secondary School dormitory, said that the President has a “great passion” for education and aspires to see every child in school.

“Our government has at the helm a man who loves education; a man who wants you and the children of the coastland to have an education and equal opportunities. Our President promised a good life and we are doing [these] things to ensure that you all have a good life,” Minister Ally said. She also told the students that the gift of shoes should further motivate them to improve their attendance and performance at school.

Meanwhile, in brief remarks, Mrs. Granger said that the partnership would not have come to fruition had it not been for the efforts of Mr Ross and Caribbean Airlines, which has been bringing the shoes to Guyana free of cost. She noted that the initiative caters particularly to students in the hinterland areas, since they are the most vulnerable. 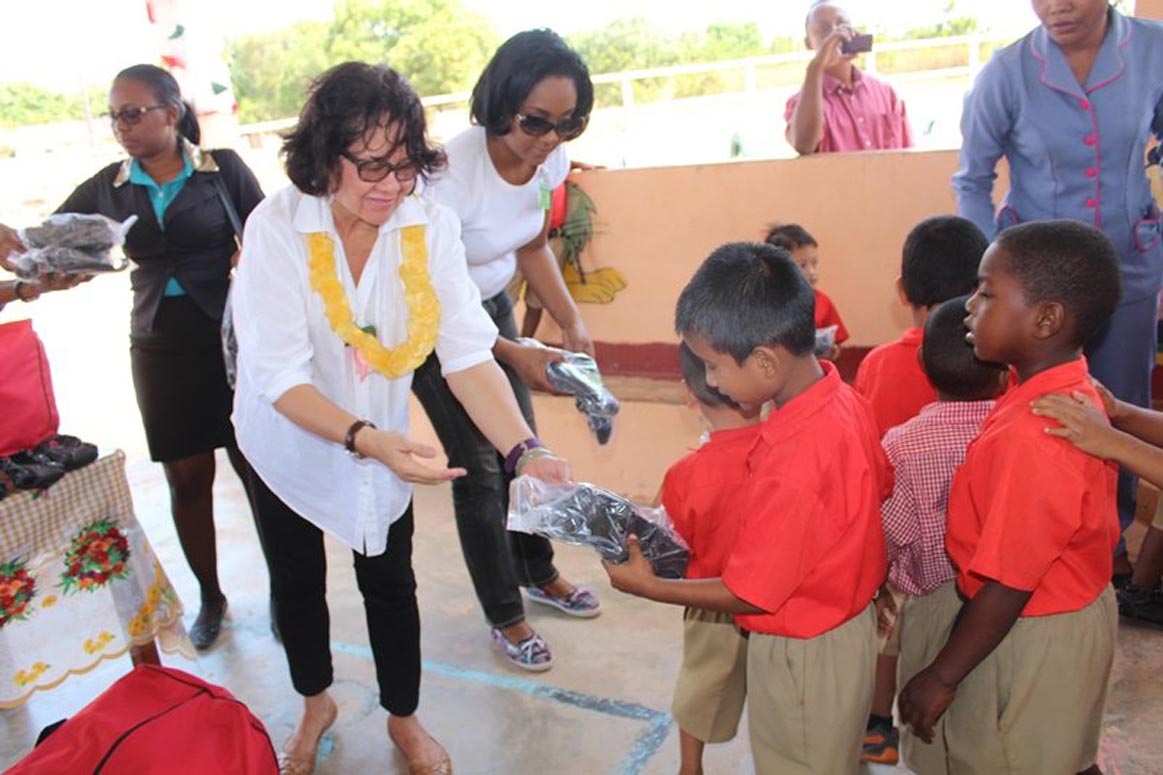 Students queue-up to receive their pair of ‘shoes that grow’ from First Lady, Mrs Sandra Granger and other assistants who travelled to Region Nine to distribute them today.

Headmistress of the Arapaima Primary School, Mrs. Mary Torres, in an invited comment, praised the project, noting that though it may seem small and inconsequential to many, it is a big boon to the students, their families and the entire region. The Headmistress said 200 of the 345 students at her school are in dire need of the shoes, since their families are challenged in many ways.

“It is very exciting. These shoes are going to be very beneficial to them because most of these students come from single parent homes, broken homes and even sibling homes. Right now, everyone is rushing to Marudi to work in the goldfields and these children are left on their own. Some of them, when they come to school, you as a teacher, when you see how they are attired, you want to help them but you can only do so much, so this is a very good start,” Mrs. Torres said.

Over at the Arapaima Nursery School, one of the students, upon seeing the shoes, shouted, “We need shoes, I hate these ugly shoes I have on”, when Minister Ally announced that she had arrived with footwear for them.

Regional Executive Officer, Mr. Carl Parker, also welcomed the initiative, noting that it will do well for the students in their pursuit of education.

Last month, some of the schools who benefited from today’s exercise also received a number of bicyles under the ‘Three Bs’ programme. 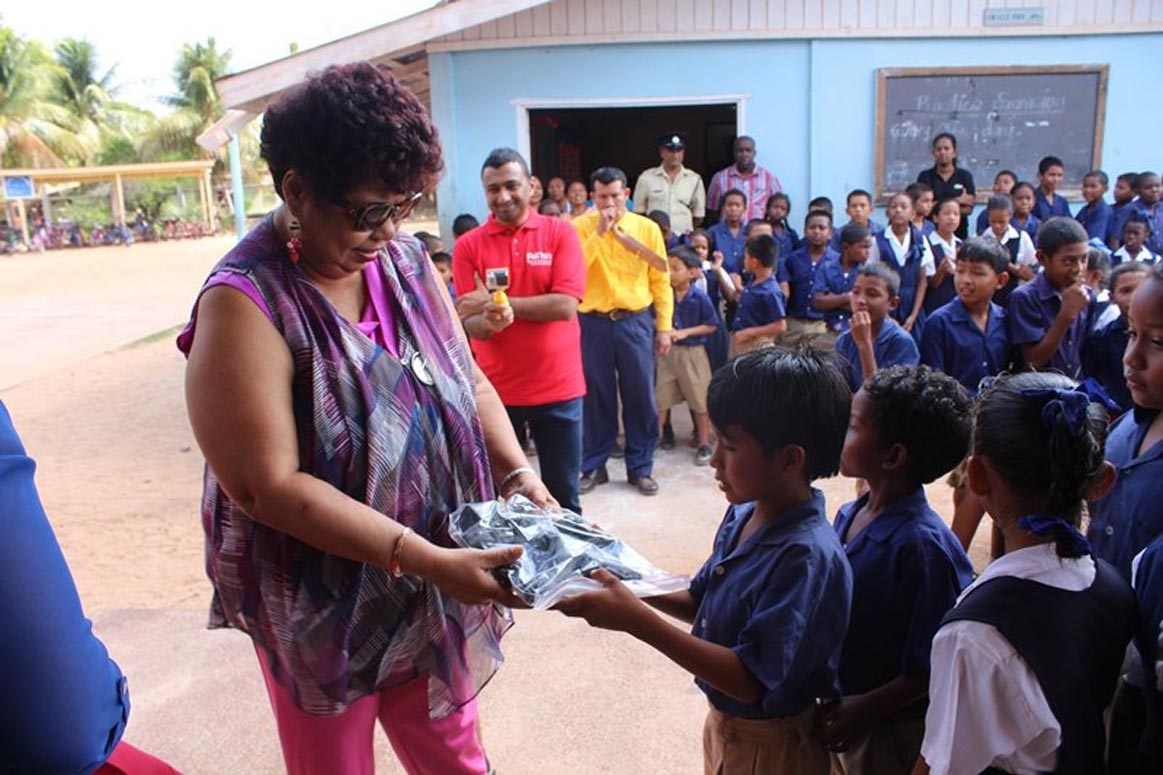 Minister Amna Ally waits patiently as this lad from the Arapaima Primary School, Region Nine looks curiously at his brand new pair of shoes as he collects it from her.

The First Lady announced another partnership with Mr. Ross, titled “Project Happiness”, which seeks to train teachers to interact, identify and treat depressive behaviours, counsel and motivate students. Mrs Granger said that the project is thought to be critical to helping treat troubled children and is another step government is taking to reduce the incidence of suicide in the nation.