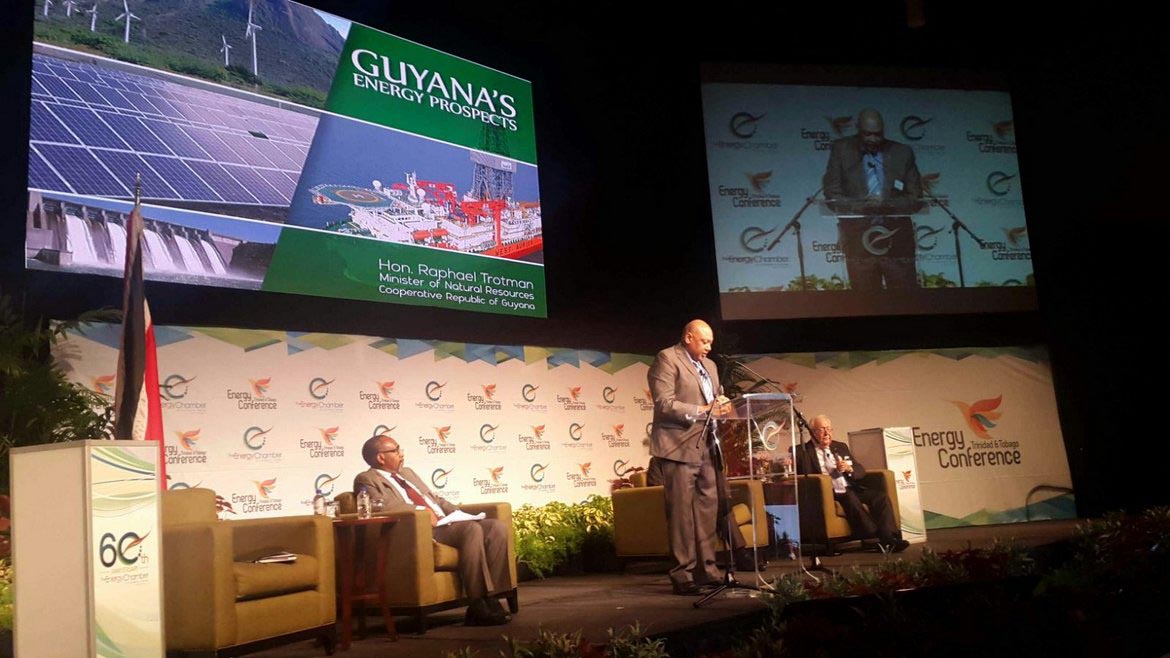 Georgetown, Guyana – (January 19, 2016) Minister of Natural Resources, Mr. Raphael Trotman, has challenged the Caribbean community to employ and promote sustainable and environmentally friendly practices in their energy sectors, even as they pursue development for their countries, in his address at the Trinidad and Tobago Energy Conference currently being held in Port of Spain.

The Conference, which began yesterday and will conclude tomorrow, is regarded as the leading Energy Conference in the Caribbean; providing a forum for active debates and discussions among leaders in industries and government.

Minister Trotman told the participants that all countries, especially those in the Caribbean must begin to see their natural resources as part of their God-given national patrimony and aim to develop them in keeping with the recently defined sustainable development goals. He then spoke of the Guyana Government’s plan to ensure that the country can become a ‘green’ economy by 2020, through the development and promotion of green initiatives and practices in the various sectors of the economy.

“In 2016 we realised even more that the two – energy and the environment, are inextricably and inexorably linked. Guyana therefore, has a simple and strong objective to sustainably harness and develop the natural resources with respect for the environment and the promotion of the dignity of the people,” Minister Trotman said.

Speaking on the recent discovery of oil here and the potential for production, he noted that while Guyana is excited at the prospects of being an oil producer, it is also cognisant of the fact that it has committed to becoming a country that utilises 100 per cent renewable energy within the next decade.

Noting that Guyana’s challenge, shared by all nations in this Region, is to be self-sufficient in energy and to produce a surplus that can be sold on the world market, Minister Trotman said that the country has been unable to access reliable power at stable, reasonable costs and as such, has been carefully examining hydropower projects, which caters for sustainable development.

“A potential alternative such as hydropower is within the hinterland regions, which are sparsely populated and away from the typical centres of consumption… access to the natural resources is already there. Infrastructure and viable energy options remain a challenge, and hopefully, with vision, planning and expected revenues, we can provide an energy mix that sees us using more renewables and selling the vast majority of our hydrocarbons. It is important to note that in our recently submitted Intended Nationally Determined Contribution to the UNFCCC Guyana committed to 100% renewables in the next decade,” he said.

According to the Minister, as Guyana proceeds to address its energy needs, it is doing so by laying a four-fold foundation as part of its transition towards a ‘green economy.’ This entails continued preservation and use of forests for sequestration of carbon dioxide, the development of hydrocarbons through attracting more exploration and development of wells; and the development of renewables and improved governance within the extractive industries sector.

To this end, he said that the various sectors will have to be properly managed so that at the regional level, in the context of the access to technology, and the resources to apply, the business and commercial linkages, can further integrate the Region and make it more recognizable and influential in the international arena. “As we proceed, with caution as our watchword, we intend to ensure that our burgeoning oil and gas industry is research based, sustainable, respectful to the environment and beneficial to Guyana and Guyanese,” he said.

Guyana has already started the process of seeking membership at the Extractive Industries Transparency Institute (EITI) with the recent discovery of oil.

Minister Trotman said that the Administration recognises that Trinidad and Tobago is best poised to guide and mentor Guyana as it develops its oil and gas industry, since it is already a subscriber. As such, he has already engaged the Trinidad Energy Minister on government-to-government collaboration in the development of the oil and gas sector, businesses interested in coming to Guyana to work in the oil industry and the TT Extractive Industries Transparency Initiative (TTEITI).

To this end, he noted that Guyana holds strongly to the ideals of the Treaty of Chaguaramas and finds the concept of Regional Energy Integration “very interesting” since it harks back to the foundation of what CARICOM is all about.

“We are an unflinching subscriber to the CARICOM Energy Policy that mandates its member states “to transform the energy sector through the provision of secure and sustainable supplies of energy in a manner which minimizes energy waste in all sectors, to ensure that all CARICOM citizens have access to modern, clean and reliable energy supplies at affordable and stable prices…” We each have our peculiarities in terms of – location, size, industry, state of development, strategic economic and development plans; and commodities on offer, but our diversity must not be a barrier to our integrated development,” he said.