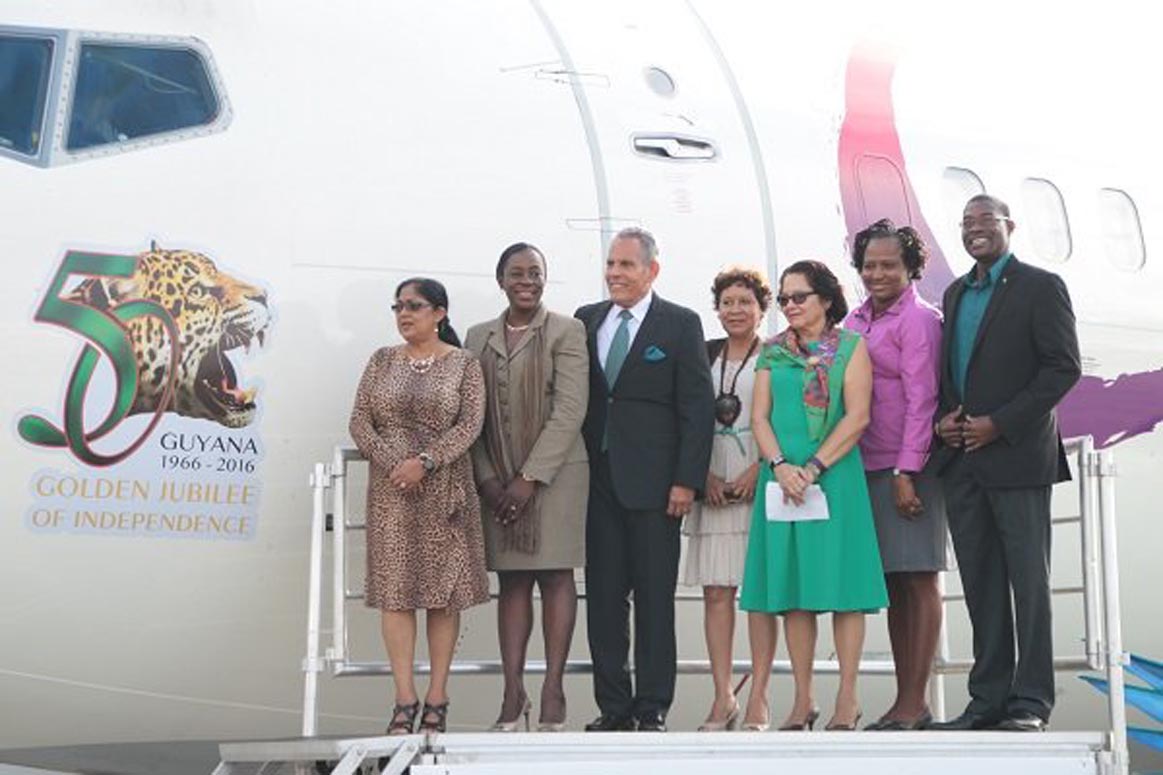 The logo has been superimposed on the exterior cockpit walls of three Caribbean Airlines aircraft, via collaboration between the National Commemorative Commission and the airline.

In her address, Mrs. Granger said she was honoured to be a part of such a momentous event, adding that she has no doubt that this venture will market Guyana at Caribbean airports and further afield. The First Lady commended Caribbean Airlines for partnering with the government as, over the years, the airline has been providing faithful and exceptional service to Guyana.

“We would like to thank Caribbean Airlines…its staff, for recognising the value of this partnership and of our Caribbean patrimony and joining with the people of Guyana in commemorating this important event” Mrs Granger said.

The First Lady also noted that on March 24, 2013 Guyana celebrated 100 years of aviation and that the country’s relationship with Caribbean Airlines dates back to when the company was called British West Indies Airways (BWIA). She then urged Guyanese to use the jubilee anniversary to reflect on the past, even as they look forward to the future. 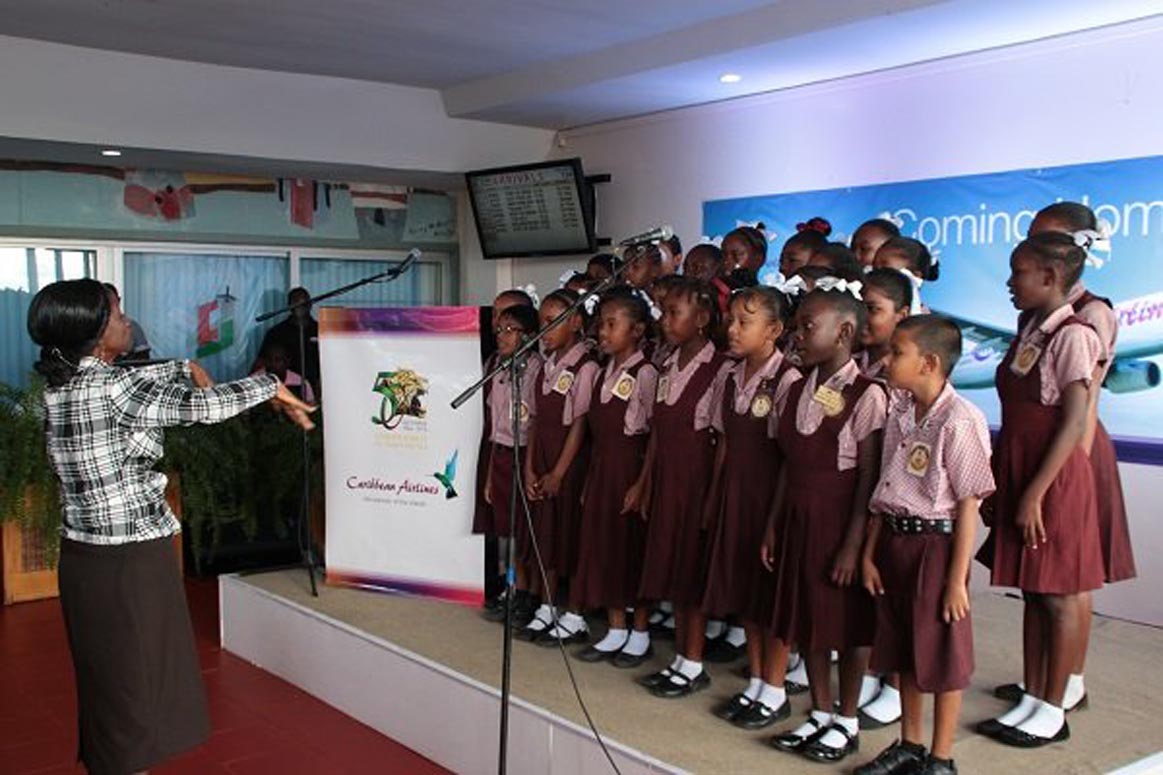 The sweet voices of the Timehri Primary School Choir rang out when they serenaded the gathering with the National Song ‘My Guyana El Dorado’.

“It is my hope too that as we celebrate this 50th Anniversary we will celebrate our warmth, one people, one nation with one destiny and move forward together with unity of purpose in strength and harmony,” she added.

Meanwhile, Co-Chair of the National Commemorative Commission, Ms. Nicolette Henry, who is also Minister within the Ministry of Education, called on the nation to be inspired by the anniversary celebration, particularly youths, whom she urged to dream bigger dreams and set higher goals. Ms. Henry also commended Caribbean Airlines for collaborating on this venture to showcase the spirit of Guyana to the rest of the world.

Meanwhile, Chairman of Caribbean Airlines, Mr. Philip Marshall, said CAL is pleased to be a part of Guyana’s anniversary celebrations. He said the theme of the celebrations, “Coming home in 2016” is particularly appropriate given the critical role the airline plays in transporting many Guyanese nationals to and from home, and to international destinations. 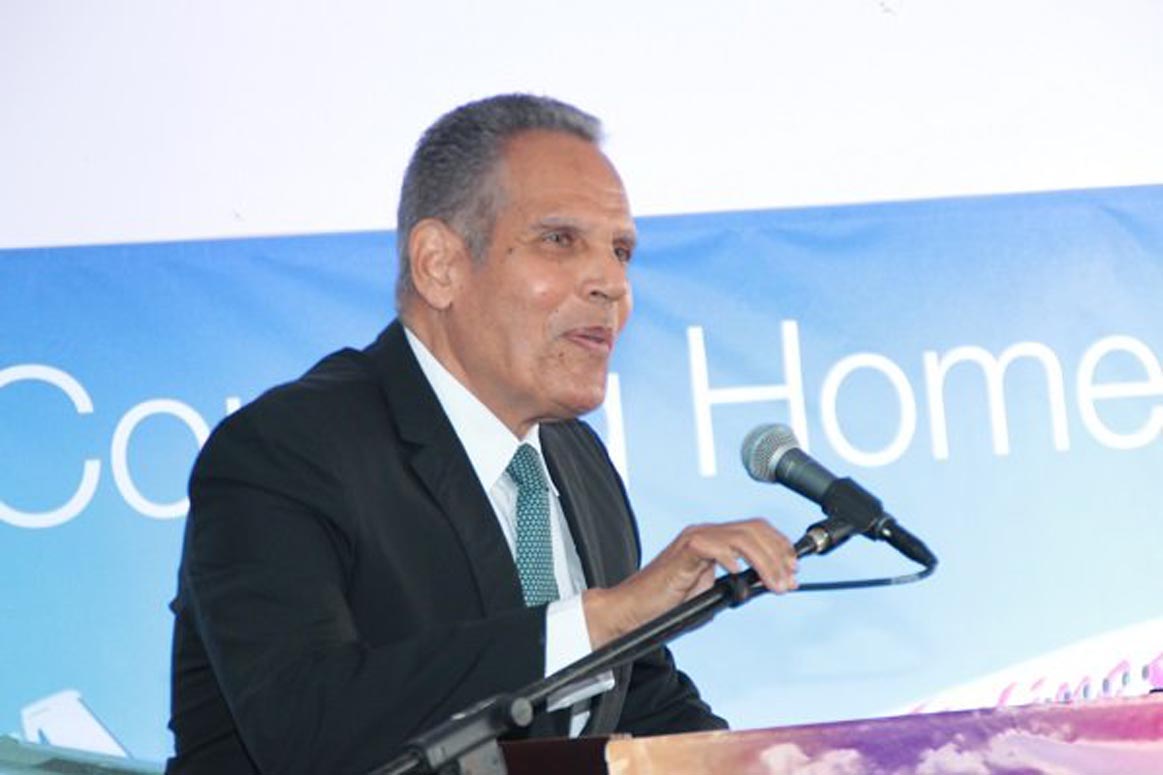 Caribbean Airlines Chairman, Mr. Philip Marshall says Guyana is one of the company’s top performers, in his address at the ceremony.

“We have the privilege of being the national flag carrier, and ever since 2007 we have enjoyed a mutually beneficial relationship, with an average of six daily flights and carrying over 350,000 passengers annually to and from Guyana,” Mr. Marshall said.

With specific regard to the anniversary celebration, he said the airline will continue to work closely with the local tourism body to bring more investors and tourists to the Region. Already, he pointed out, the airline has been facilitating familiarisation tours with the local tourism body and plans to ramp up this initiative in the coming months. The Chairman then thanked his Guyanese staff for their contributions to the successful operation of Caribbean Airlines in Guyana, noting that the Guyana station is among the company’s top performers.