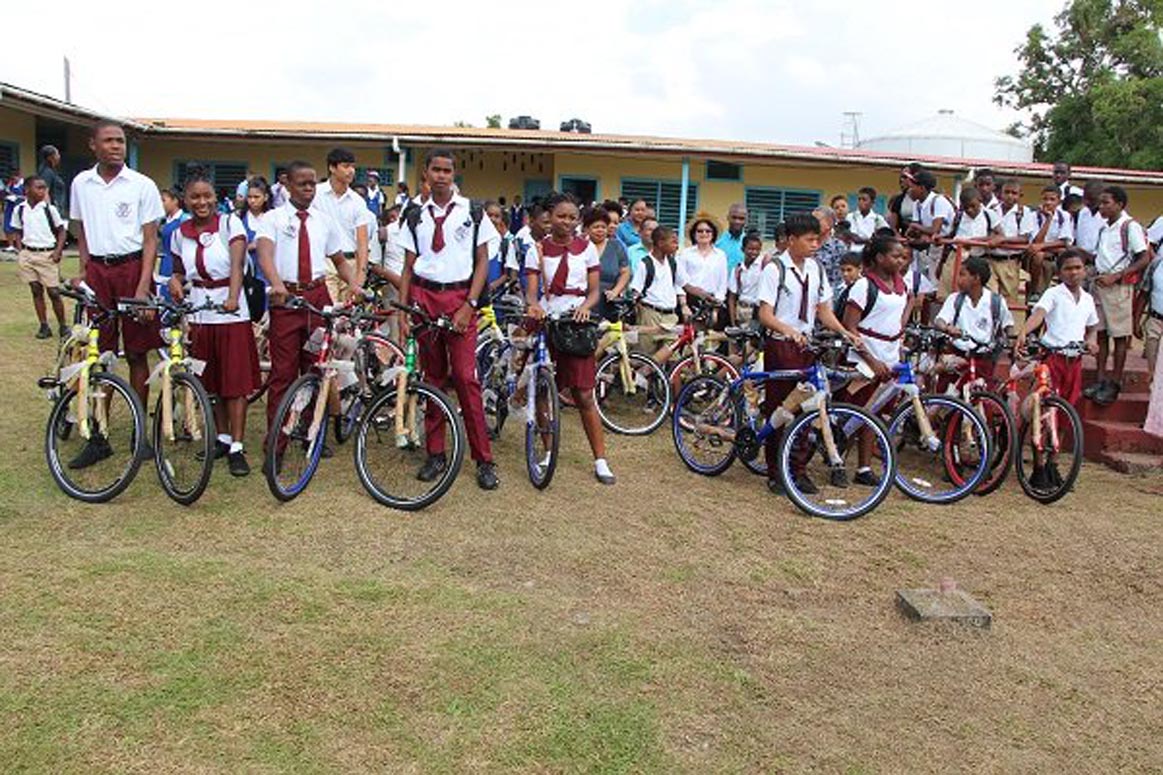 Georgetown, Guyana – (January 8, 2016) Twenty-one students of Bartica, Region Seven, today, received bicycles from the Government as part of President David Granger’s ‘Buses, Boats and Bicycles’ or ‘three Bs’ programme aimed at ensuring that all of Guyana’s children are able to attend school.

Two boats and a 30-seater bus are also expected to be added to this complement before the end of the year, to provide transportation assistance to the children of the Region.

The bicycles, were donated to the ‘three Bs’ programme in December by David and Margaret Enterprise, of Potaro, Mahdia, Region Eight and Kent Phillips of Antarctic Maintenance and Repairs in Georgetown. First Lady, Mrs. Sandra Granger and Minister of Social Cohesion, Ms. Amna Ally presented the bicycles to the students at a simple ceremony held at the Bartica Secondary School. 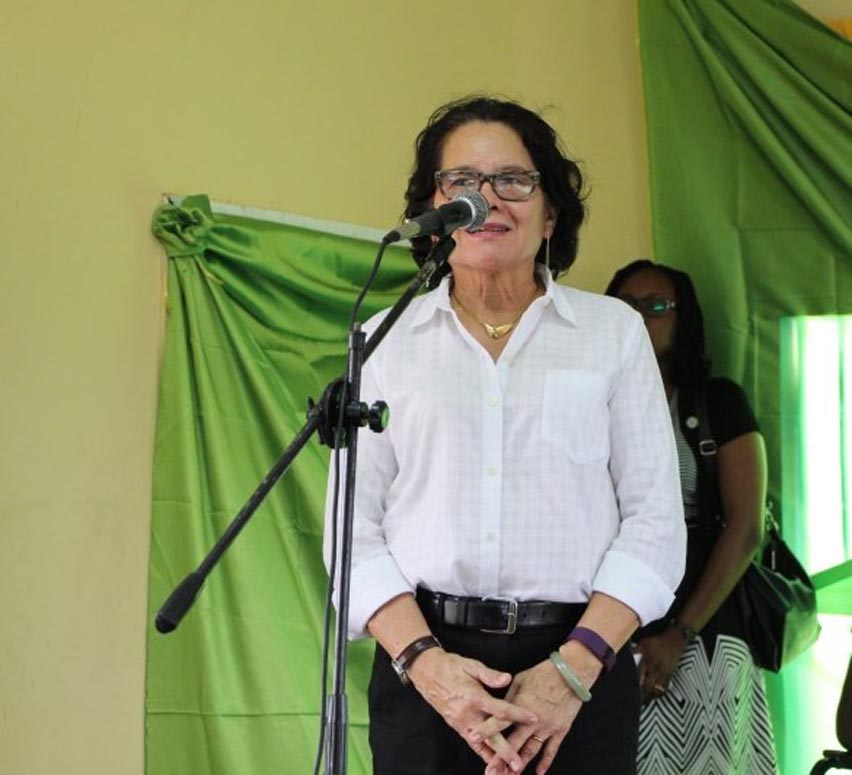 The ‘Boats, Buses and Bicycles’ initiative started back in July 2015 when President Granger celebrated his 70th birthday and made a call for support for the initiative that aims to ensure that transportation is provided so that children can get to school safely and comfortably. Since then, there has been a tremendous national response, with private citizens and businesses donating boats and engines and bicycles to the programme.

In brief comments, the First Lady charged the students to take care of the bicycles, noting that it must serve to strengthen their resolve and drive to pursue their education.

“…This initiative to get our children to and from school has caught on…many [persons] have come on board to assist [them],” Mrs. Granger said. “The onus is on you, the children, now to prove that you value your education and to take advantage of the education that can propel all of us here in Guyana to a better future. There is no room for school dropouts; there is no room for any child dropping through [the] cracks in our education system.” 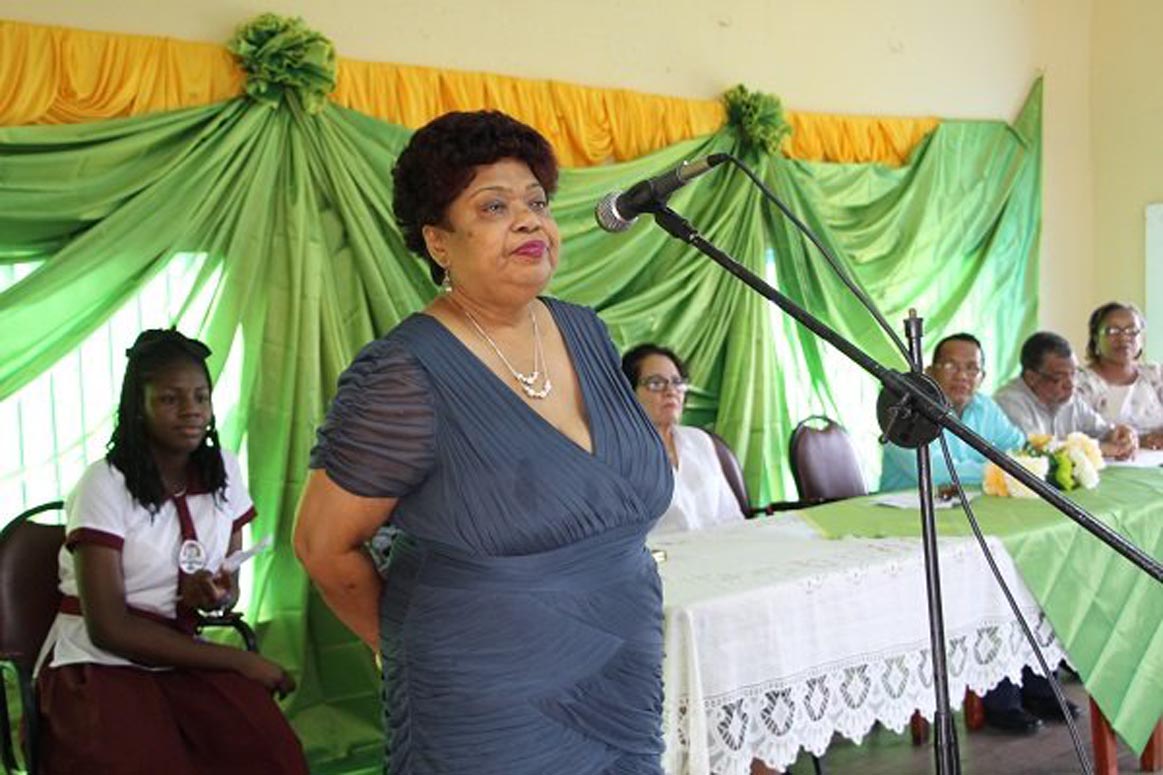 Minister Ally, within whose purview the ‘three Bs’ programme falls, told the students of the Three Miles Secondary and the Bartica Secondary Schools that the donation of bicycles was received through the determined efforts of the First Lady and her drive for a better Guyana. The minister noted that for too long, too many of the nation’s children have been denied a proper education because of poverty and other factors.

“Bartica is no different, but this government under [President David Granger’s] stewardship is going to make a change and Bartica and Region Seven, as a whole, will not be left out. The President spent a great part of his life in Bartica and so there is a little spot in his heart [for this budding township]. Very soon we will be putting a 30-seater bus along the Four Miles road to help the children to get to school and as the Regional Chairman has indicated, the Region has budgeted for two boats to take the children to school,” Minister Ally said.

According to the Minister of Social Cohesion, while Government understands that there are children in every region who are affected; “a day will come when no child will be able to complain that they live too far and they are unable to go to school; that they have to walk far distances to get to their schools. We are going to be proud of this initiative.”

Minister Ally also used the opportunity to encourage the students to be their brother’s keeper and to talk to a trusted relative or friend if they are experiencing hardships or depression. She cautioned them against committing suicide, reminding them that with support they can endure and overcome even long-time problems, and that they are Guyana’s most valuable assets.

“I want to say to you there is a light at the end of the tunnel. I know that you have experienced hardships; I know that many people have experienced depression for one reason or the other, stress, emotional problems and so on, but I want to make a plea to you, as the Minister of Social Cohesion, not to give up. I want to ask each of you present to make it your business to talk with your neighbours, your families, your friends, and your schools and try to impart the knowledge that now is not the time to give up. We have got to work out ways of overcoming our problems. We having far too many people giving up on life and we can’t afford that. Our young people are valuable resources and we depend on them,” she said.

Meanwhile, Regional Chairman, Mr. Gordon Bradford, praised the ‘three Bs’ initiative, telling the students that education is the most important element in the development of any nation.

“This project is not the first and the last. We have in our programme, buses and two boats have been budgeted for in the Regional Budget. We know that this nation needs educated children to take this country forward so that we can achieve our true potential as a nation,” he said.

The Regional Educational Officer and the Headmistresses of the schools selected the beneficiaries on the basis of distance away from the school the child lives and other factors to determine need for transportation.

Minister Ally said that her Ministry, through the Ministry of Education, will be monitoring the attendance and performance records of the students, who have benefitted under the initiative to ensure that it is effective.

To date, five boats and a number of bicycles have been handed over to several communities across the country, under the ‘three Bs’ programme. The President is also expected to commission a number of buses within this month.