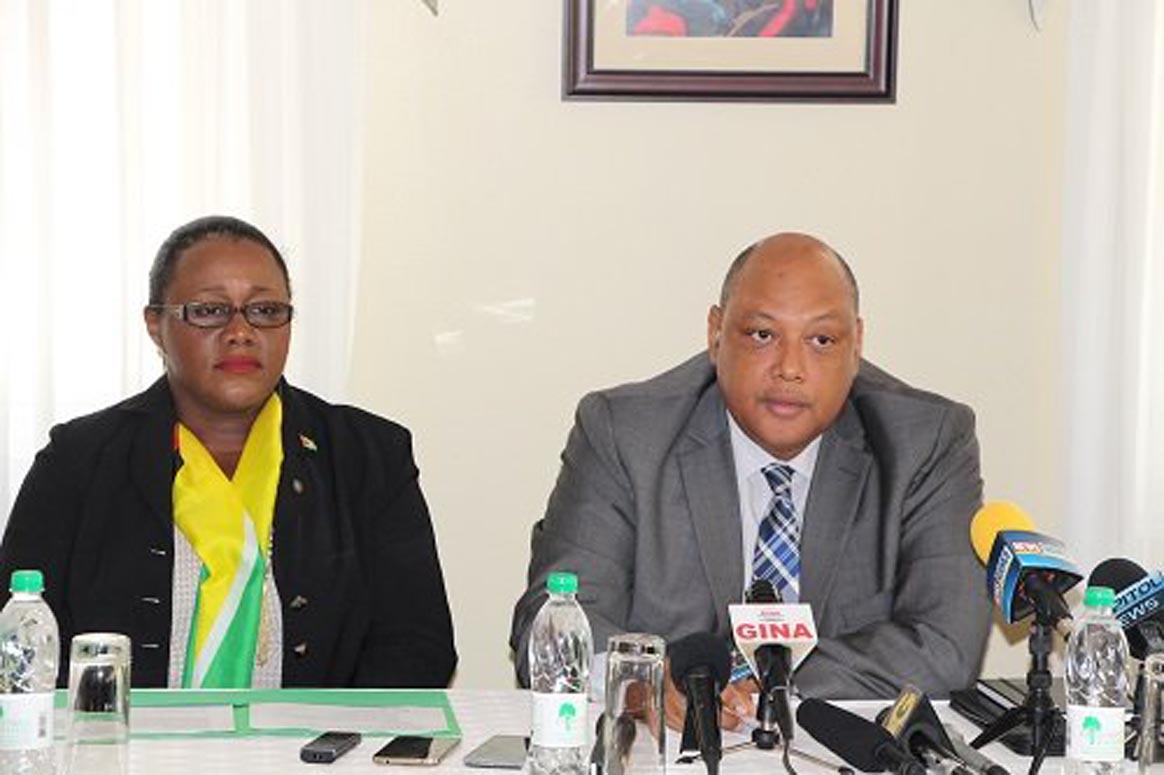 Georgetown, Guyana – (January 6, 2016) Former Minister within the Ministry of Social Protection, Ms. Simona Broomes, who has now been appointed Minister within the Ministry of Natural Resources, will be heading a campaign on Occupational Health and Safety (OHS) in the mining and forestry sectors as well as ensuring that employers comply with the laws and regulations in both sectors.

This is according to now Minister of Natural Resources, Mr. Raphael Trotman, who held a press conference earlier this afternoon to formally introduce Minister Broomes to the media and to provide details about her new portfolio and his newly formed Ministry.

He noted that Cabinet has approved Ms. Broomes’ portfolio to oversee aspects of occupational health and safety and the protection of the rights of workers and practitioners, within the mining and forestry sectors. Her role will be focused on ensuring compliance with the laws and regulations in those sectors.
According to Minister Trotman, given the wealth of experience and knowledge of the mining industry, Minister Broomes’ possesses, her presence at the Ministry is an asset.

“She [Minister Broomes] is recognised as a champion for workers’ rights wherever she goes and we have no doubt that that championing of rights will continue with renewed and even greater vigour. It is the intention of this Ministry to fully utilise the Minister’s passion in areas that require active attention, to curtail abuses within the mining sector and ensure the enforcement of regulations,” Minister Trotman said.

Minister Broomes, in her remarks, said that she is pleased that the President has placed such confidence in her abilities by placing her at the Ministry of Natural Resources. She vowed to continue enjoying that confidence by addressing and advocating for the rights of those in the sector.

“I know that miners in the industry can look forward to an industry where you have a level playing field. I want to thank His Excellency for placing me in this Ministry and for placing such confidence in me. For many years, the rights of workers; of miners and the enforcement of regulations were badly treated under the former administration but with Minister Trotman as the leader, I know that I [am] privileged to be in this position. I am here to serve and will continue to serve the Guyanese people,” Ms. Broomes said.

New department
In the meantime, Minister Trotman said that in addition to the seven departments that fall within the purview of the Ministry of Natural Resources; the Guyana Gold Board (GGB), Guyana Geology and Mines Commission (GGMC), the Environmental Protection Agency (EPA), the National Parks Commission, the Protected Areas Commission (PAC), the Guyana Forestry Commission (GFC) and the Wildlife Commission, a new department, called the Petroleum Department, will now be added.

“The Oil and Gas sector will also be getting much attention from the Ministry this year. As you may be aware, the President of ExxonMobil Exploration Company and a number of executives are visiting Guyana and have met with President Granger and the partnership with Exxon continues to be built. The Ministry… will be formalising the foundations necessary for the establishment of a Petroleum Agency and will be paying keen attention to lessons learnt in the Region and further afield,” Minister Trotman said.

Additionally, the Ministry has planned several activities to reach small and medium-scale miners.

Small miners meeting
With regard to regulatory concerns, landlordism, threats and issues of land access for small miners, the Ministry will be hosting a Small Miners Meeting on Saturday, January 16 from 09:00hrs at the Arthur Chung Convention Centre (ACCC). A number of related Agencies and subject Ministries will be participating to ensure the complete support network is present for the miners in attendance.

Duty-free concession hearings
In order to alleviate allegations of impropriety and to create a more transparent process for the acquisition of duty-free concessions, Minister Trotman said that as Senior Minister, he will be holding fortnightly hearings with applicants for duty-free allowances and will include the officers from the GGMC in this process.

Field visit to Mahdia
The Ministry will be conducting a field visit to the Mahdia sub-region on Sunday, January 10, 2016 and will be holding a community meeting at the Mahdia Community Centre in the evening to listen and address concerns affecting miners and citizens in the area. This visit will be conducted in conjunction with senior officers from the GGMC, Regional Officers for Region Eight and Representatives of the Ministry of Public Infrastructure and the Guyana Police Force.

Gold smuggling
The Ministry will also be working in strong collaboration with the Ministry of Public Security and the United States Federal Bureau of Investigation (FBI) and Homeland Security to clamp down on the smuggling of gold out of Guyana.
According to Minister Trotman, more than 15,000 ounces of gold is smuggled out of the country every week and this simply cannot be allowed to continue.