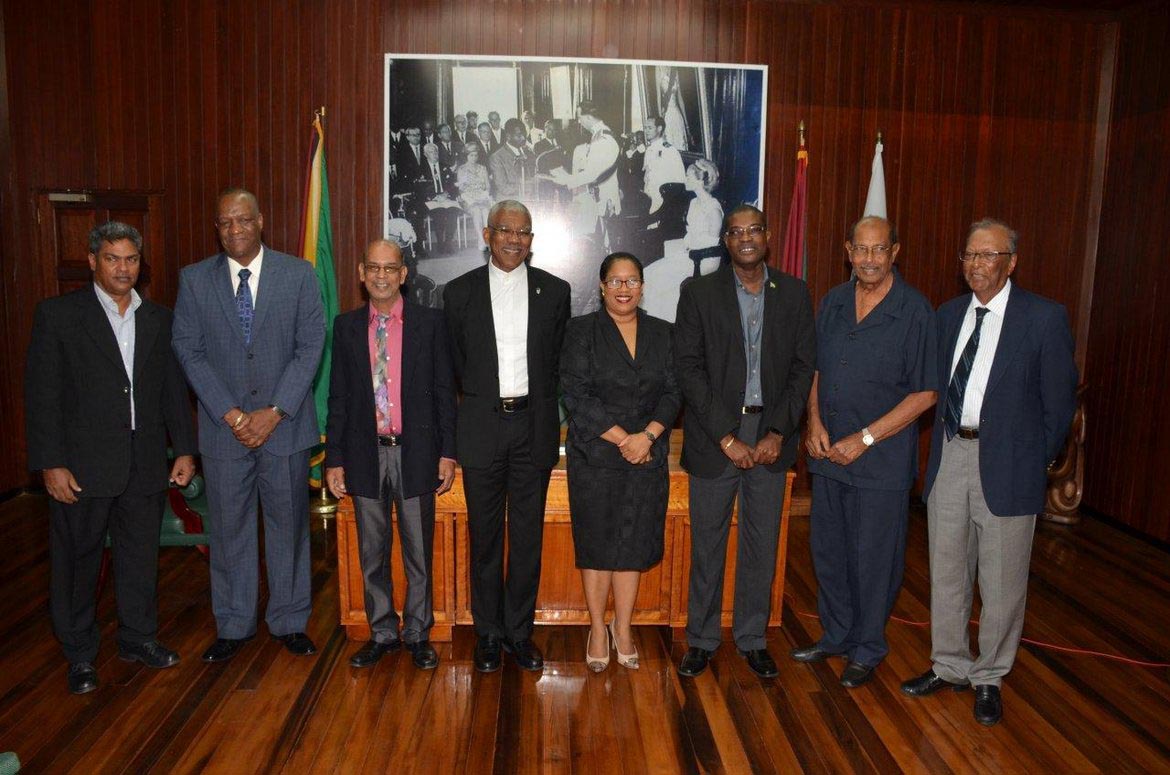 Georgetown, Guyana – (December 30, 2015) President David Granger, today, swore in two more Commissioners to serve on the Public Utilities Commission (PUC) and charged them to operate within their mandate as the Commission plays a critical role in Guyana’s development.

Mr. Rajendra Bissessar and Ms. Dela Atta Kuma Britton, an Attorney-at-Law by profession, were inducted as PUC Commissioners in presence of the Chairman, Justice Prem Persaud; Minister of State, Mr. Joseph Harmon; Minister of Public Infrastructure, Mr. David Patterson, and other stakeholders, during a brief ceremony held this morning, at the Ministry of the Presidency. Ms. Britton is the first woman to be installed on the PUC Board.

In his address to the commissioners, President Granger noted the importance of adding members to the PUC complement even as he underscored the critical role the PUC must play in Guyana’s development, particularly, in the area of telecommunications. 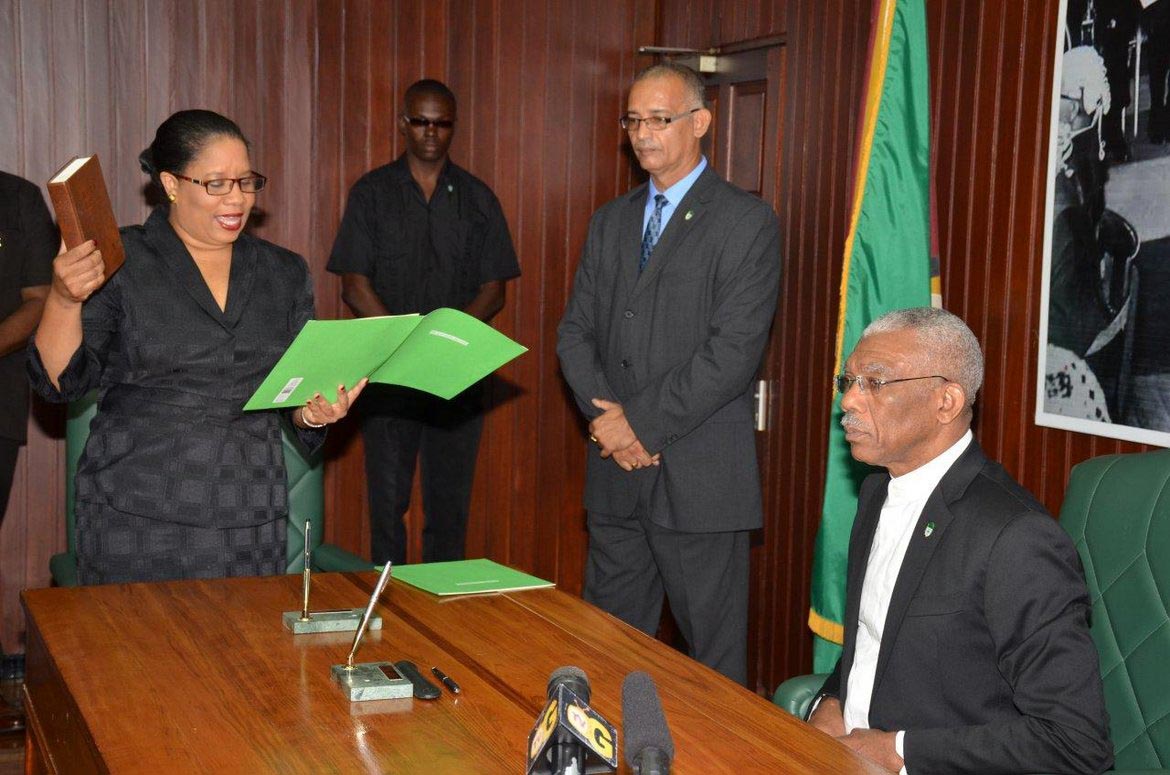 Ms. Dela Atta Kuma Britton makes her oath before President David Granger, at a brief swearing-in ceremony held this morning at the Ministry of the Presidency.

“We want to emphasise the importance that our administration places on public utilities, particularly telecommunications, which is a major preoccupation of the Commission… The world is moving ahead at a fast rate…the speed at which communications and other public utilities have to perform nowadays requires that we keep abreast and the strengthening of the Commission now, this year, next year and [in] the years to come will be very important to the overall development of our country. We are not moving as fast as we ought to, but we need to keep abreast with the rest of the world…” President Granger said.

Meanwhile, the new commissioners said they were honoured to be chosen to serve the nation and committed to doing their jobs to the best of their abilities. Ms. Britton said she is particularly pleased to learn that she is the first woman inducted on the Board. She pledged to ensure that service in the telecommunications sector is vastly improved.

“I am truly honoured to be the first woman to serve in such an office and as the President has said, it is an important industry because technology is on the rise and with the advent of the new Telecommunications Act, we will have a load of work to do as a Commission, because [with] the Act and the supposed dismantling of the monopoly that exists, we would have to deal with a lot of personalities and companies. It will be an exciting period for the PUC,” she said.

In his comments, Mr. Bissessar said he will be advocating for better service from the Guyana Power and Light (GPL). “There [are] a lot of deficiencies existing there [at GPL] and I feel that there should be more prompt responses there. There needs to be a deeper understanding of the fundamental issues…so I hope we can do something with GPL,” he said.

He also noted that the Commissioners will be available to interact with members of the public and any individual who may have a complaint is always welcomed at the office of the PUC. The other Commissioners serving on the PUC are Mr. Badrie Persaud and Mr. Maurice Solomon.

While it is vested with the power “to initiate and conduct investigations into the operations and standards of service of any public utilities under its purview”; the PUC is not involved in policy, though it could “act in an advisory capacity to the Ministers responsible for utilities on such matters concerning the utilities as are referred to it by the relevant Ministers,” according to its website.

The PUC operates from its Queenstown, Georgetown office which was commissioned earlier this year. 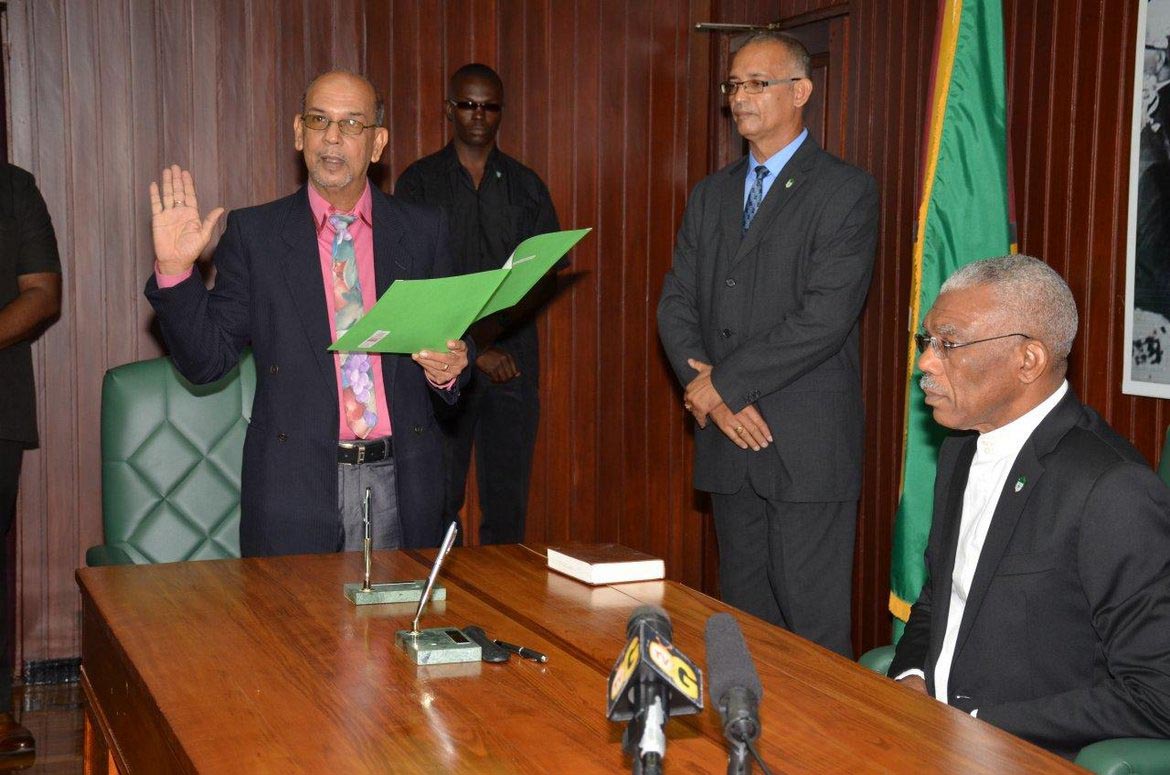 Mr. Rajendra Bissessar makes his oath before President David Granger during the installation ceremony of PUC commissioners, held this morning at the Ministry of the Presidency.