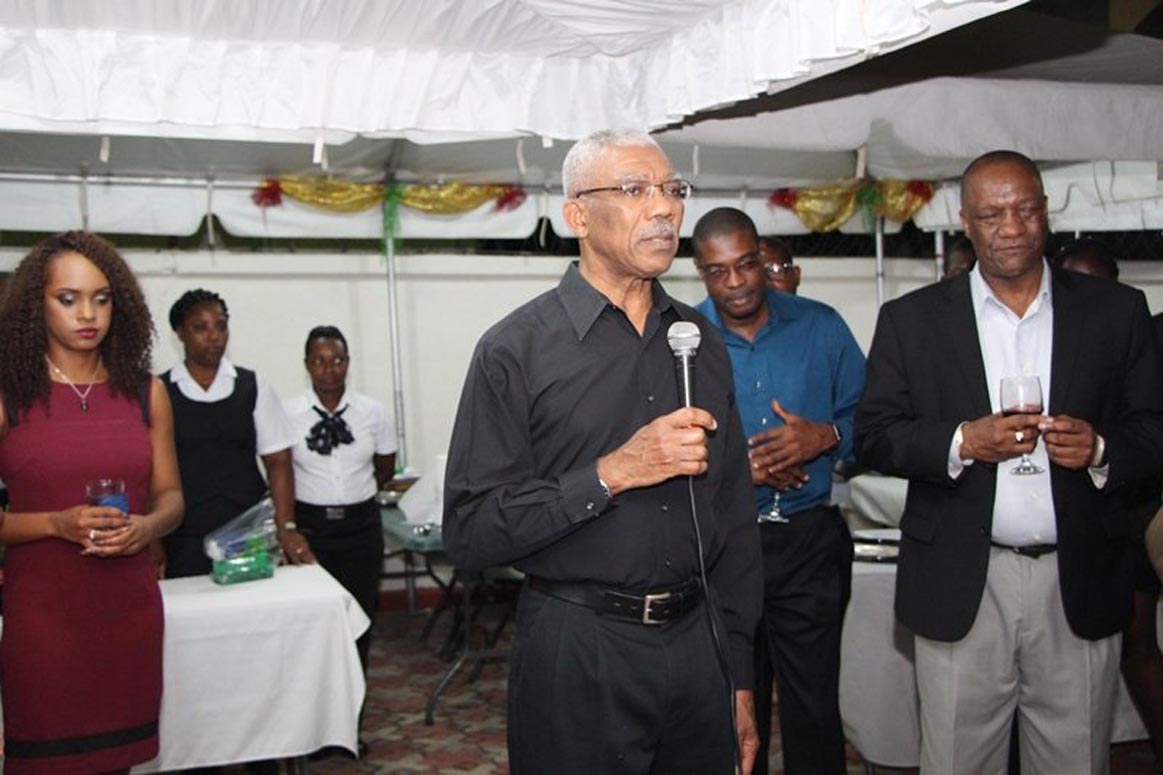 Georgetown, Guyana – (December 29, 2015) President David Granger, last evening at the residence of the Minister of State, Hon. Joseph Harmon, encouraged an eager group of young Guyanese students studying abroad to return home. The Head of State, in an impassioned presentation to the students, sold them on the benefits of returning home to serve their country.

“We are going to move mountains to enable young Guyanese to come back and have a stake in their native land,” he said.

Speaking at the first international student networking event, which was organised by the Minister of State and Simona Broomes, daughter of the Minister within the Ministry of Social Protection, Hon. Simona Broomes, the President said that the ‘good life’ in Guyana beckons to people who are entrepreneurial, adventurous and committed to this country.

Speaking with obvious love for his country, the President spoke of Guyana’s natural resources and mineral wealth and told the students, most of whom are visiting Guyana for the holidays, that they would be welcomed to return to Guyana to serve their country.

“We need people who are going to build roads, build aerodromes, and develop this country. I wouldn’t have been here had I not believed in this country. When we look at the prospects of Guyana, I believe that there is a future for every Guyanese… Guyana is the new frontier in the Caribbean. It is a land of hope and promise and we want to guarantee that promise to the next generation,” he said.

“Guyana is the biggest, the most blessed, the most beautiful, the most bountiful Caribbean country of all, without exception. There is nothing that a country could want that Guyana does not possess and I hope when you visit that you have the opportunity to move around and see what this country is like and you will see something else. You will say this is your country. This country has got the most exciting flora and fauna in the world; not in the Caribbean, in the world! We have the most powerful eagle, the biggest ant-eater. There are more species of birds in the Kanuku than in the whole of Europe… There is nothing we need that we cannot produce,” the President said.

The Head of State added that as Guyana approaches its Jubilee Independence Anniversary, it is important that all Guyanese, at home and abroad come together to repair a nation, which was broken at birth, so that it can be positioned for growth and development. 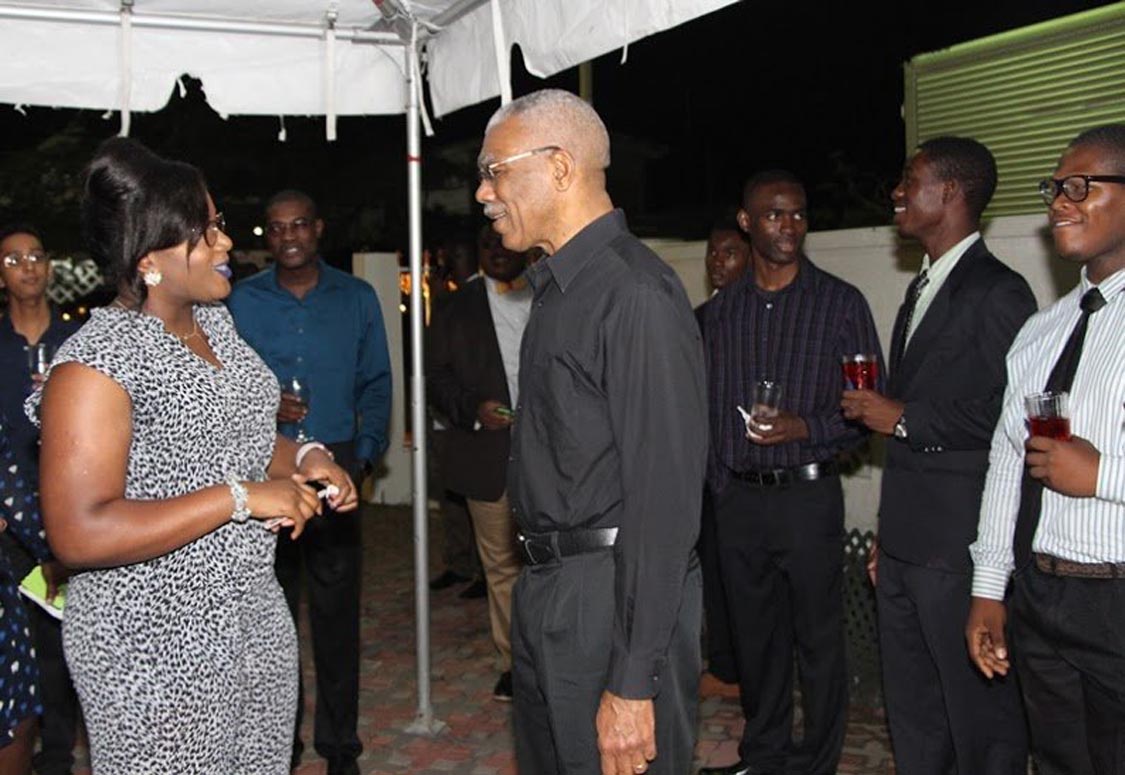 President David Granger shares a light moment with Ms. Simona Broomes, one of the overseas- based Guyanese student at the event last evening and the daughter of the Minister within the Ministry of Social Protection.

“We had tremendous difficulties. Next May is a very important event because it is a time for national unity, for coming together, for the realisation that we are one and we either swim together or sink together… Next year we must, more or less, celebrate a second independence. You being here is an important step we are taking towards that goal. I have always said that Guyana is divided into two; one half in South America and the other in North America and part of my mission is to reunite the two halves and to let those in the diaspora know that they are Guyanese… This country beckons for them, the country needs them. We need human power to exploit those resources. We need people like you…,” President Granger said.

The President assured the students that his administration will put systems in place to ensure that they can return to serve their country, once their studies would have been completed.

Also speaking on the occasion, Minister Harmon said the event was aimed at giving students, who live and study abroad, the opportunity to interact with the President and Ministers of Government, so that they can be informed of the plans the administration has for the young people and be encouraged to return home after their studies would have concluded.

“We want you to understand that you are the future of Guyana. We are basically setting the ground work for you to come and take over and move Guyana to where it has to be. Guyana is the place of the future and irrespective of where you study, Guyana is your home and… you can apply what you have studied abroad to solve the problems in Guyana. That is what we look forward to doing and having you do. We welcome you here and I hope that next year, we will have a larger gathering. Our President has said that there must be a good life for all Guyanese and you must all contribute to that good life,” Minister Harmon said.

In the meantime, some of the students, in invited comments, praised the initiative even as they committed to returning to the country to serve, especially in the areas of Business and Medicine. “I think it is important that we students, who are studying overseas, have the opportunity to interact with each other because we are so spread out, so it is really good that we have this opportunity not just to interact with each other, but the Government officials so that we have share our ideas and hear what is happening,” Ryan Duff, a student at the Howard University, said.

Martin Massiah, an International Business graduate, said that he was happy to be home for the holidays and will be making his contribution to Guyana in the development of several business ideas. “Guyana is a land of many resources. I will be coming back to Guyana and I will be developing a number of businesses, developing proposals to really enhance the infrastructure in Guyana especially in the area of technology because it would allow us to raise the bar for Guyana,” he shared. 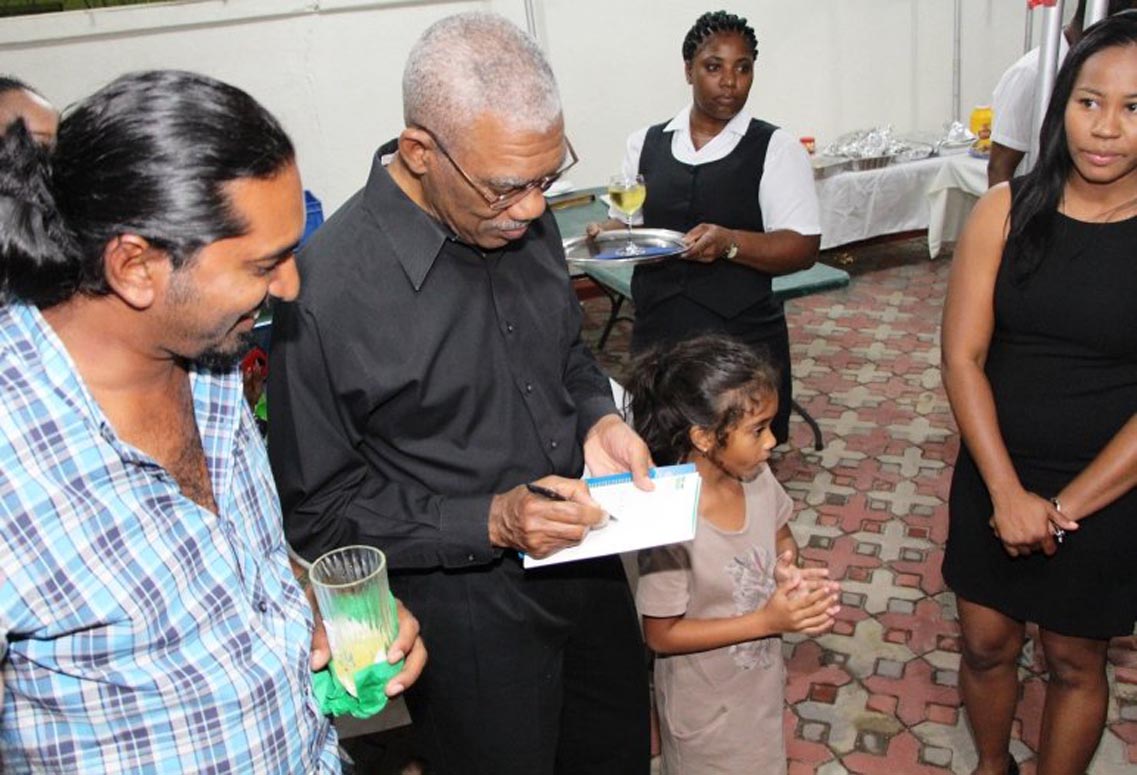 The President also took the time to autograph some of his publications on the request of some attendees.