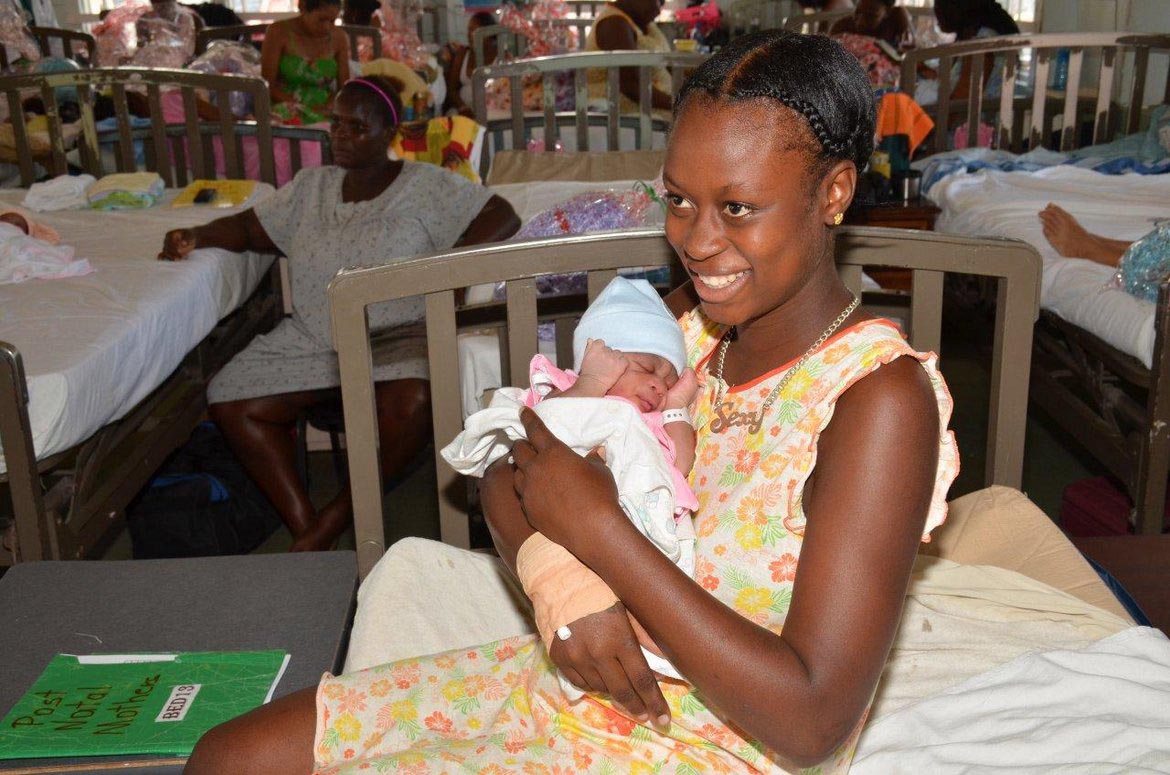 Georgetown, Guyana – (December 25, 2015) As Guyana sat down to Christmas morning breakfast, President David Granger and First Lady, Mrs. Sandra Granger visited the maternity and children’s wards at the Georgetown Public Hospital Corporation (GPHC). The President, who was also accompanied by Minister of Health, Dr. George Norton and Minister of Social Cohesion, Ms. Amna Ally, said that it is part of his job as President to be at the hospital on Christmas morning, not only to bring cheer but also to have a first-hand look at the challenges patients experience at the institution.

Speaking to nurses at the end of his tour of the maternity ward, the Head of State said, “I will be working with the Minister of Health to improve the circumstances under which you work and under which mothers have to give birth. This is where life starts and if you don’t ensure you have a safe environment, that the mothers are in a comfortable environment and the staff have the resources they need to do their work, we are likely to have problems.”

The President added that the visit is an important one as it allows him to understand the challenges facing the sector. “We will do everything possible to ensure that we have better conditions in years to come,” he said.

Another Christmas baby! Ms. Venetia James of Anns Grove proudly cradles her new born.  Tatianna is the second child of her mother and is one of seven Christmas day births at the GPHC at the time of the President’s visit, this morning. 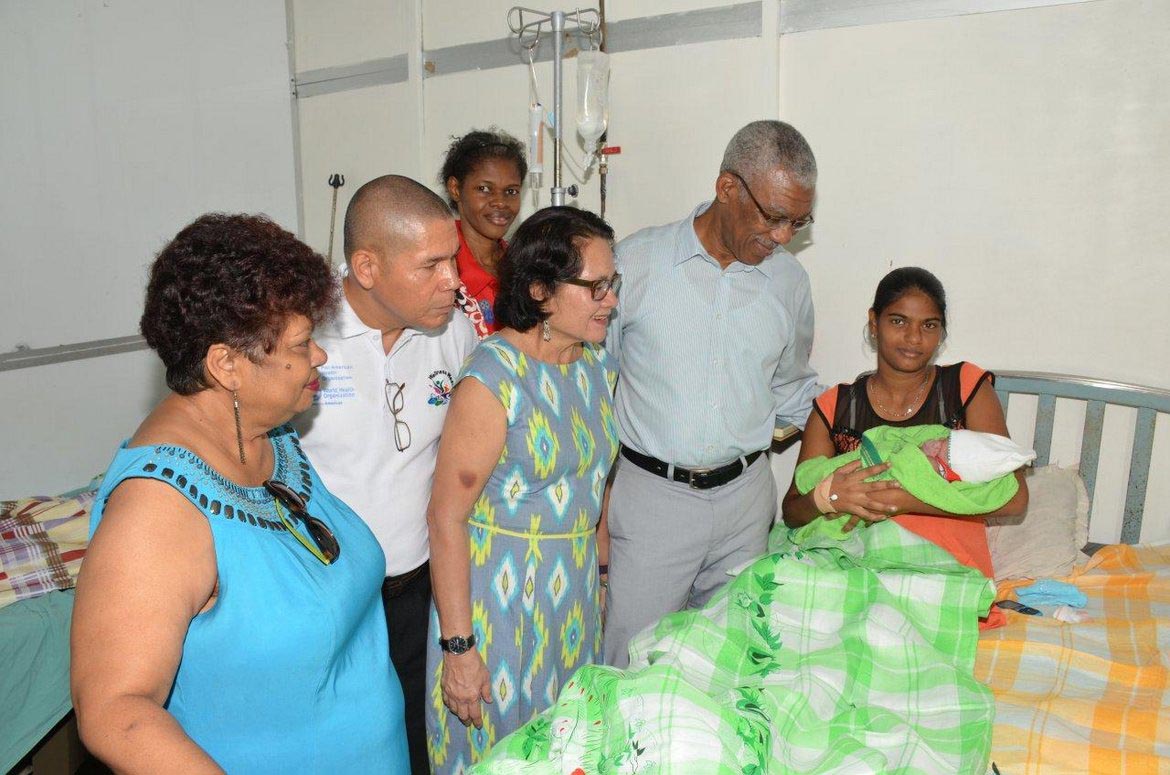 At the time of the President’s visit, seven mothers had already given birth on Christmas morning and there were 39 babies and 43 mothers in the post-natal section of the maternity ward. Staff Nurse and midwife, Michelle Holder, speaking with the Ministry of the Presidency, said that this is her eight consecutive year working on Christmas day. She added that this is the sacrifice that nurses make for the well-being of their patients.

Nurse Holder said that many of the patients, who are new mothers, are usually so excited that they don’t mind spending Christmas Day at the hospital. However, for those who are missing home, the Nurse, who was at the time in charge of the ward said, “I usually tell my patients that Christmas comes once a year, as long as you are alive. If you miss something today, you can have it next year.”

Among the excited mothers in the ward was 19 year old Meena Bisnauth of Triumph, East Coast Demerara, who was the first mother to give birth on Christmas Day. Cradling her little Christmas miracle Lisa, who was born about four weeks early, Meena said, “I want Lisa to take her education and be a good person.” This is Meena’s second child.

Twenty year old Venetia James, whose second child was also born on Christmas day, said that she named her new daughter Tatianna after a character in a movie who she liked. Her wish is that her daughter would grow up to be a doctor or a lawyer.

For Renita Patterson of Buxton, her Christmas baby is truly the gift that she had been praying for. With three boys at home; 10, eight and three years old, Renita is excited to finally have her girl and says this will be her last child. 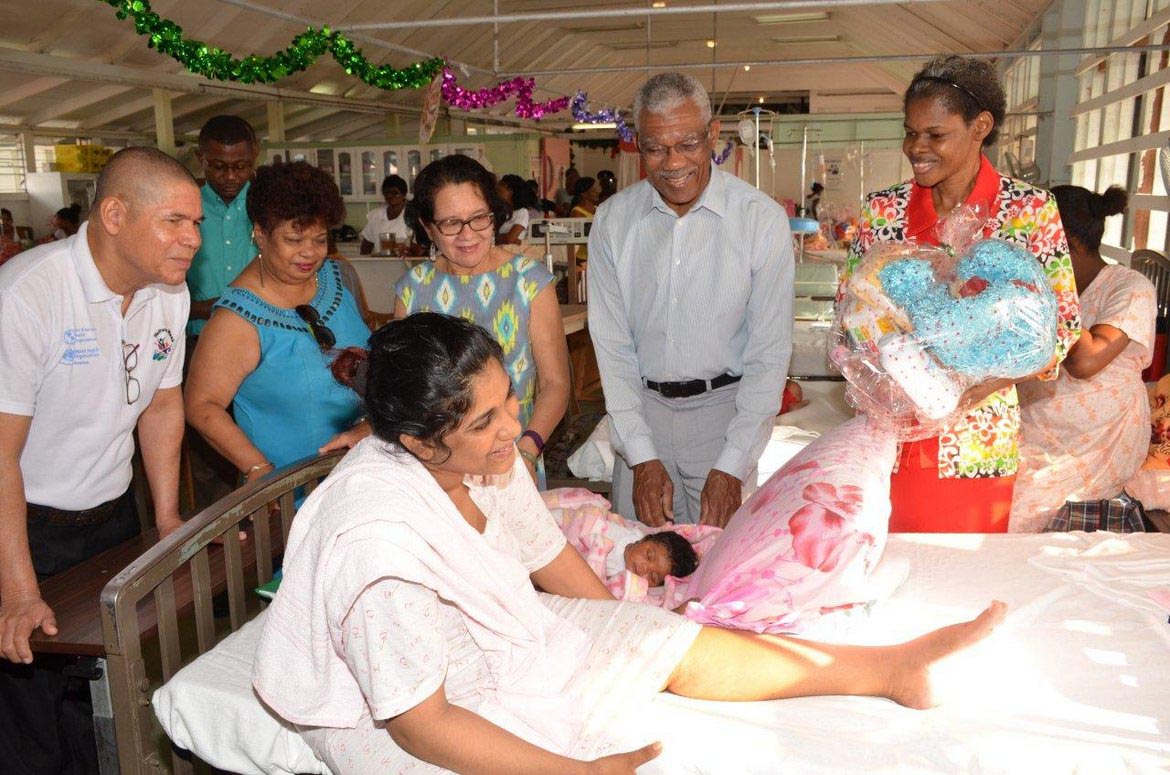 President David Granger, First Lady, Mrs. Sandra Granger, Minister of Health, Dr. George Norton and Minister of Social Cohesion, Ms. Amna Ally enjoying their time with this new mother, during the tour of the maternity ward at GPHC, this morning. 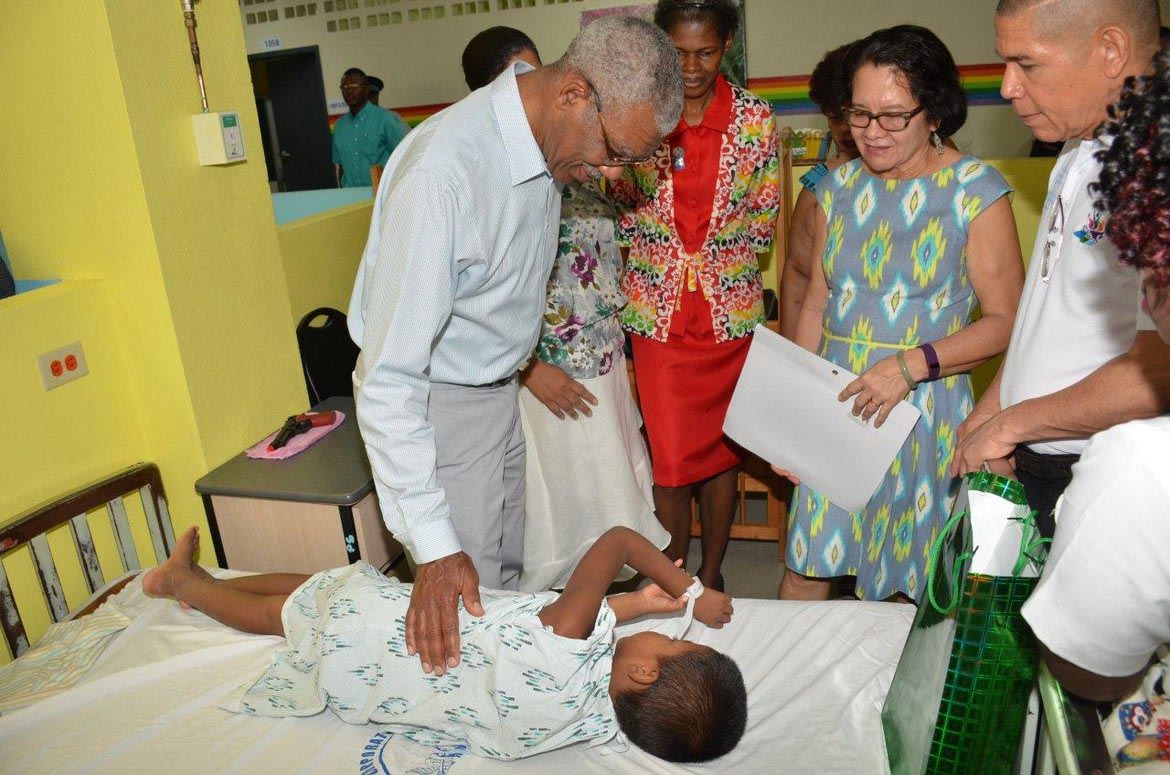 President Granger and First Lady Sandra visiting with a little boy during his visit to the Children’s ward at GPHC on Christmas Day. 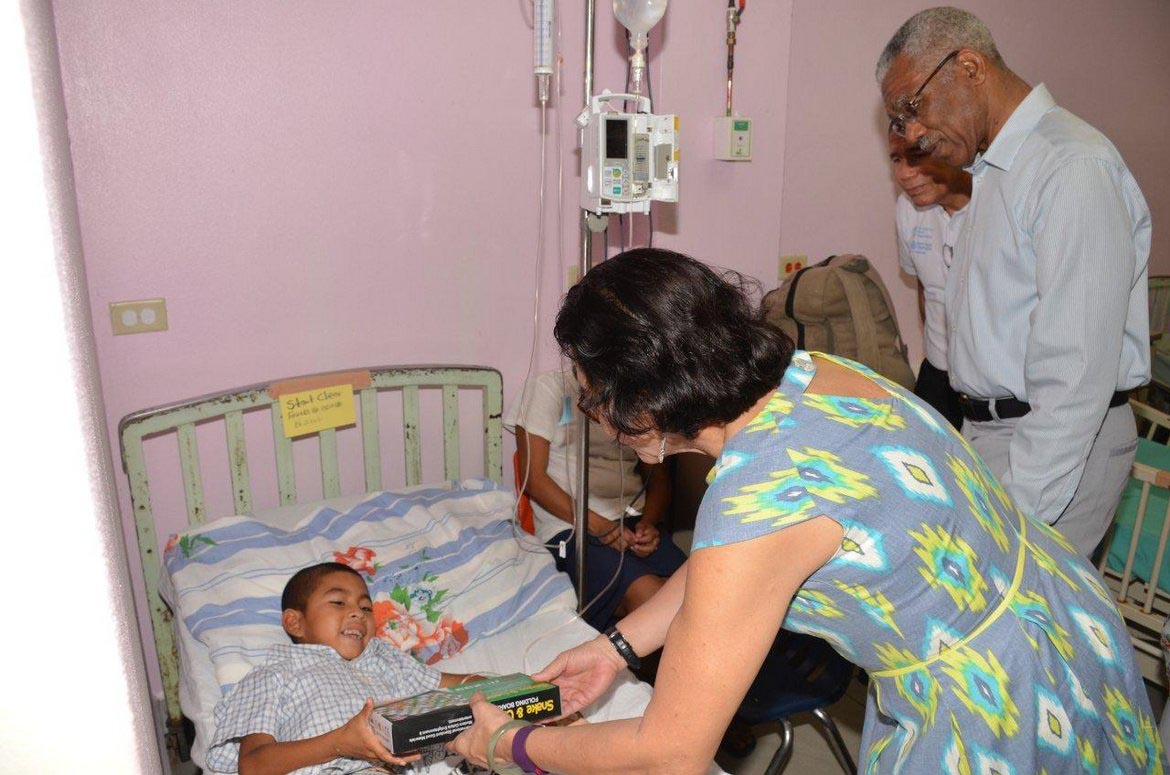 First Lady, Mrs. Sandra Granger hands over a toy to this handsome little boy, who though in hospital on Christmas Day manages a smile, as President David Granger looks on at the Georgetown Public Hospital Corporation.

President Granger himself read from the book of Malachi, Chapter nine in the Bible to a new mother. Tianie Maria Trim of Coldigen named her son, who was born on December 22, Malachi. Looking lovingly at him, Tianie said she wants him to be a doctor, while his father has dreams of him becoming a famous cricketer.

Meanwhile, Shawna Bacchus, 23 years old, said that she wants her Christmas Eve baby, Ishawn Daly, to be a teacher. “I like the profession but I didn’t have the opportunity to complete it,” she said. All the new mothers were given hampers, compliments of the Government of Guyana.

Following his visit to the maternity ward, President Granger headed over to the children’s ward. There were 17 children housed in the ward at the time and the President and the First Lady took the time to visit with each child, and in many cases their parents, asking about their condition and providing a small Christmas gift.