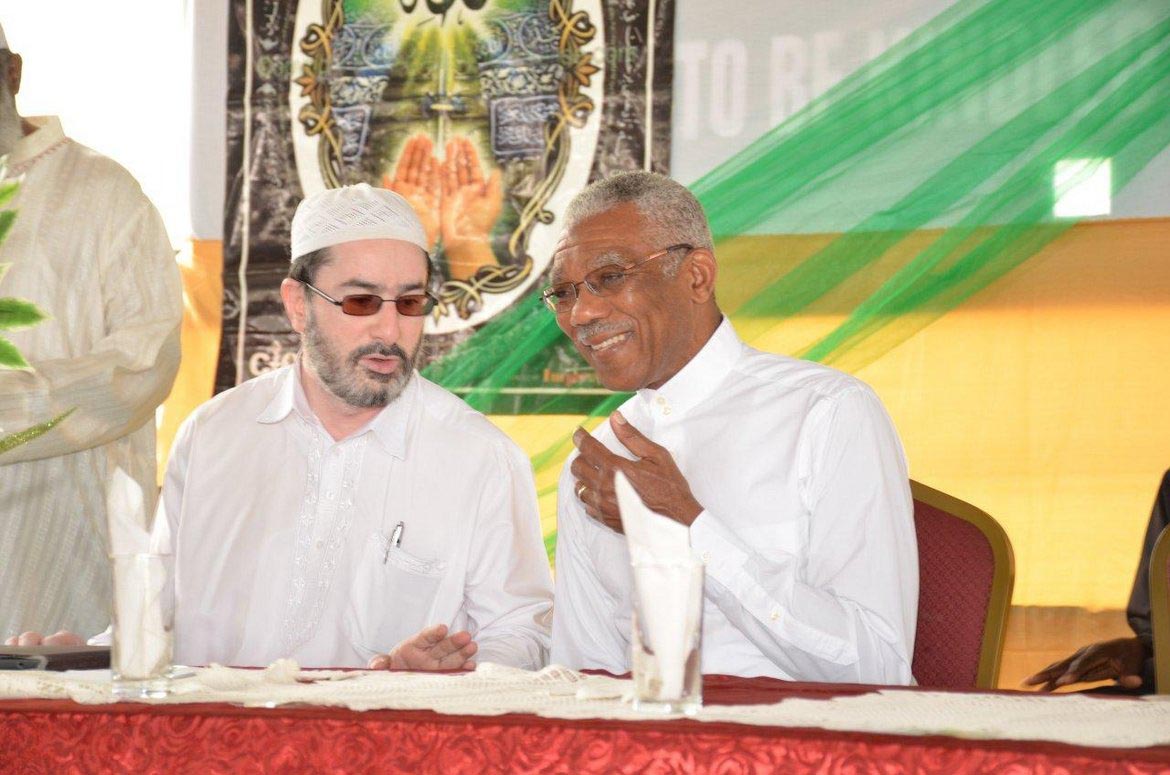 Georgetown, Guyana – (December 24, 2015) President David Granger, in renewing his commitment to ensuring every child in Guyana has access to education, today, pledged $1 million to support the programmes, which are being undertaken by the Central Islamic Organisation of Guyana (CIOG).

The President made this pledge during his address to a large gathering of Muslim brothers and sisters assembled at the Muslim Youth Organisation (MYO) for the CIOG’s Annual Youman Nabi Programme. Youman Nabi is the celebration of the birth anniversary of the Prophet Muhammad, the Holy Prophet of Islam.

President Granger also said that extremism should have no hold in Guyana; neither should it be tolerated since all religions must come together and work for the national good.

Noting that education must be a top priority in the country, and that every child must be able to attend school, the President said that he will support any organisation that promotes educational activities from which any child can benefit. 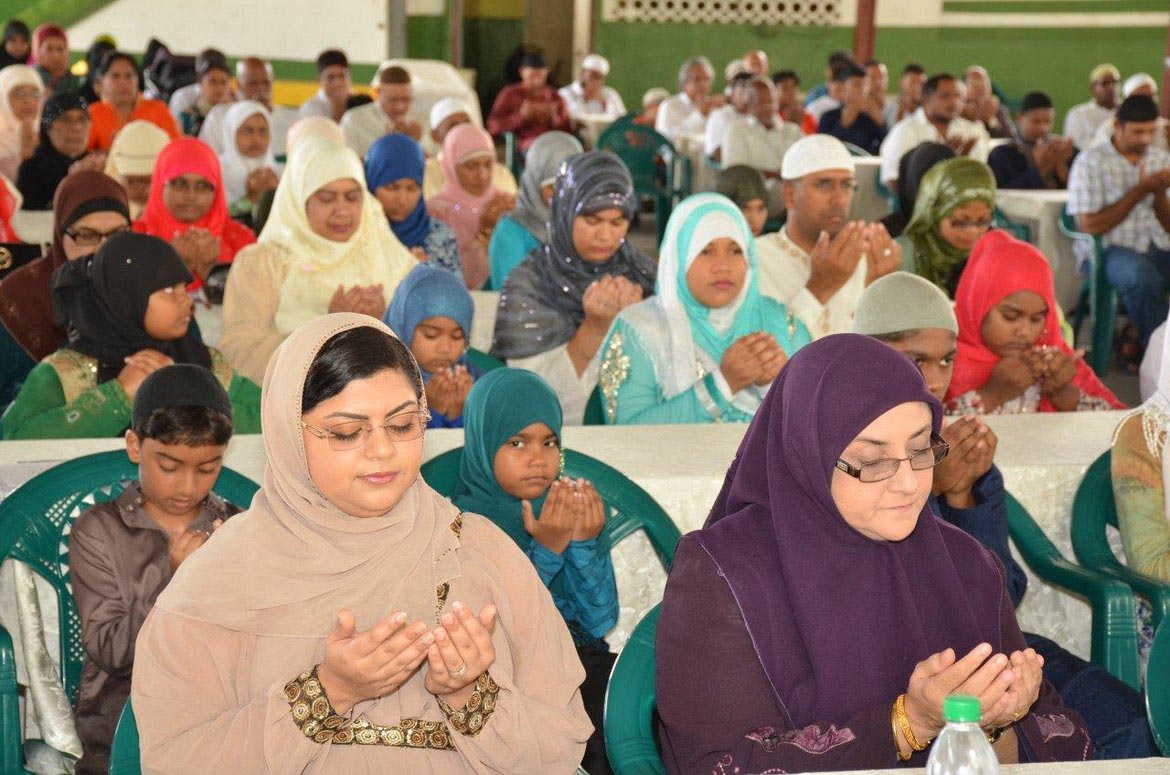 “We are in a situation in Guyana today in which I have vowed that as long as I am able and capable, every Guyanese child must find a place in school….I put a lot of emphasis on education and making sure that every child is given the opportunity to go to school. If a child doesn’t have transportation to go to school, we must provide that. If that child has no footwear, we will provide shoes. If the child has nothing to eat, we will provide meals. I am deeply impressed with the work the CIOG has been doing and, this morning, I would like to pledge a million dollars to the CIOG for the work of its three educational institutes. It is a start and…I am prepared to help anyone who is prepared to help themselves,” President Granger said.

The Head of State further noted that that as the nation prepares to celebrate its 50th Independence Anniversary Guyanese must reflect on the disturbing circumstances under which Guyana became independent and take lessons from there. To this end, he pointed out the need for national unity, if the country is really to become ‘free’ and ‘independent’. The President advised that Guyanese must work together to ensure that in national unity, no forms of perversion or extremism are tolerated here.

“We were in a state of emergency and we were born a broken nation, a divided nation. For me, 26 May, 2016 must be more than a birthday party; it must be a day, an event, a celebration of national unity and one of the greatest tragedies of our modern times has been the perversion that we have observed in some other countries. I was told that over 10,000 persons were killed by Boko Haram. There is nothing godly about that, there is nothing religious about that, there is nothing humane about that and we all have to work together to ensure that that form of extremism, which is a perversion of the faiths that we hold dear, whether that faith is Hinduism, Islam or Christianity; there is no place for that extremism in Guyana,” he said. 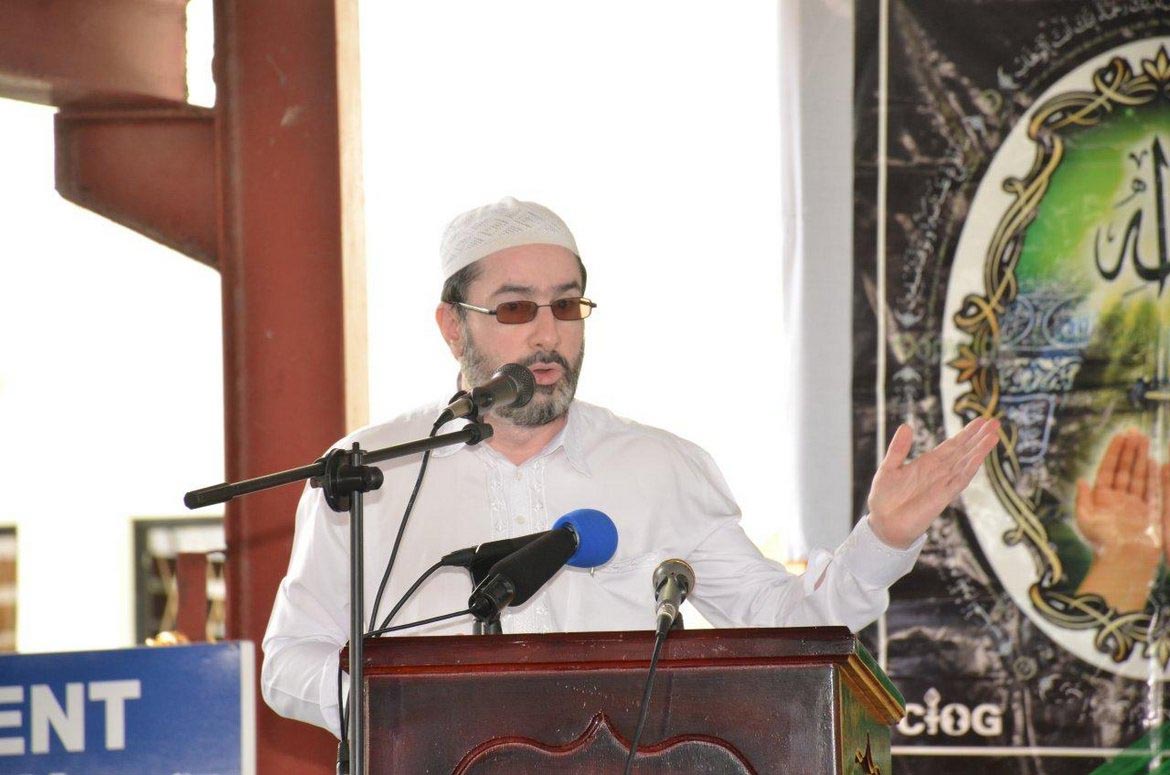 Islamic Scholar and Head of the CIOG, Sheikh Moen ul-Hack makes a point during today’s proceedings at the CIOG.

The President also expressed hopes that as Guyana moves closer to its jubilee independence anniversary, the entire Islamic community, together with the Hindu community, and the Christian community, can work for greater national unity and greater vigilance to ensure that that type of extremism does not find any place among Guyanese.

“We’ve never had that sort of religious violence in Guyana that we’ve seen in other parts of the world and as far as I am concerned, and the CIOG is concerned, the perverse doctrines will not find a place in our country, but we must work, we must not take things for granted….On this Holy day, I call on all Guyanese to work towards national unity and to work towards a greater understanding of all our people,” he said.

Meanwhile, Sheikh Moen ul-Hack, Islamic Scholar and Head of the CIOG, in his remarks said Muslims all over the world are facing a time when they have to defend their religion, and their names, due to the actions of several persons who claim to be of the same faith. However, he noted that the acts of extremism which are being committed are not representative of Islam or Muslims and in that regard, Guyana can be a shining example.

“They are saying this is Islam. This is not so and if they need evidence then there is a country called Guyana. We are, and we must be thankful that we were born here. This country is a role model for the world when it comes to peaceful co-existence and religious tolerance. ISIS, ISIL, Boko Haram, and all the others, they have nothing to do with Islam and Muslims. We, the Muslims, have suffered more than non-Muslims at the hands of these people who claim to be following Islam but are far from Islam,” he said.

The Islamic Scholar said he hopes that the message of peace, love and compassion, which were defining of the Holy Prophet Muhammad, can be taken and inculcated in the lives of all.

In his brief remarks, US Chargé d’ Affaires to Guyana, Mr. Bryan Hunt, echoed the hopes for peace and compassion to be spread throughout the Holy day and the Christmas season. 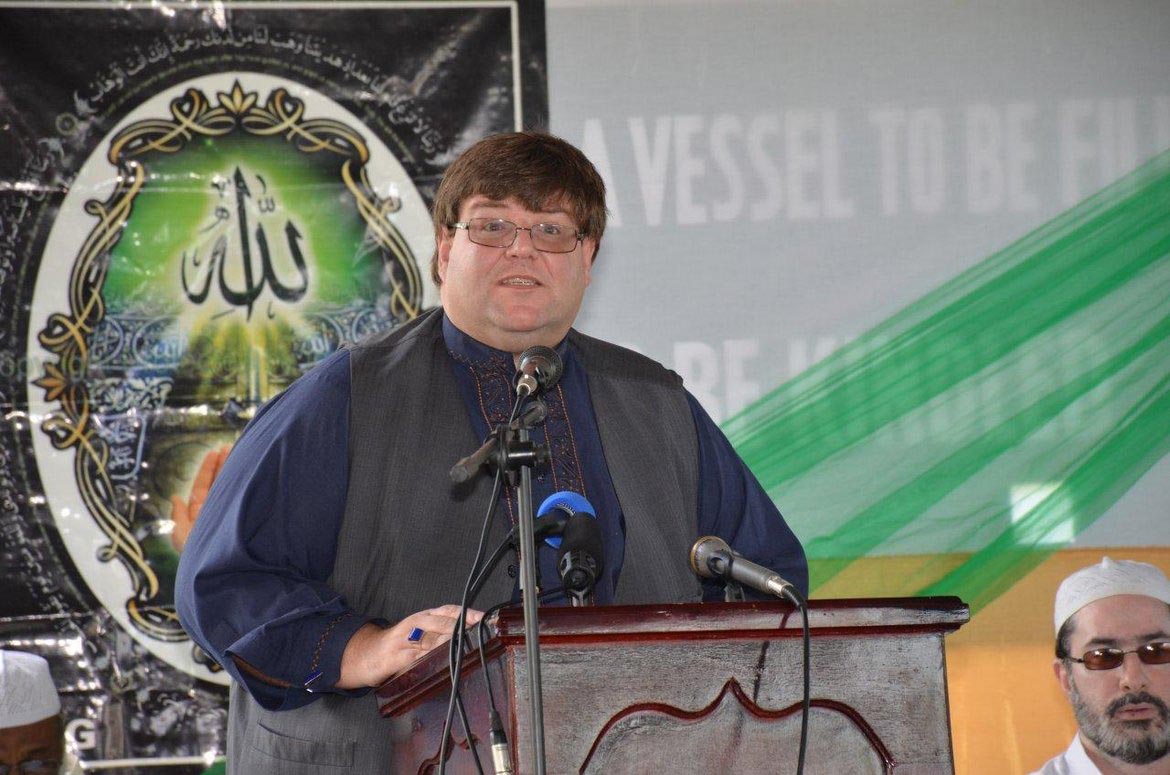 US Chargé d’ Affaires to Guyana, Mr. Bryan Hunt makes his remarks at the programme

Message of His Excellency Brigadier David Granger, President of the Cooperative Republic of Guyana, to celebrate Christmas 2015