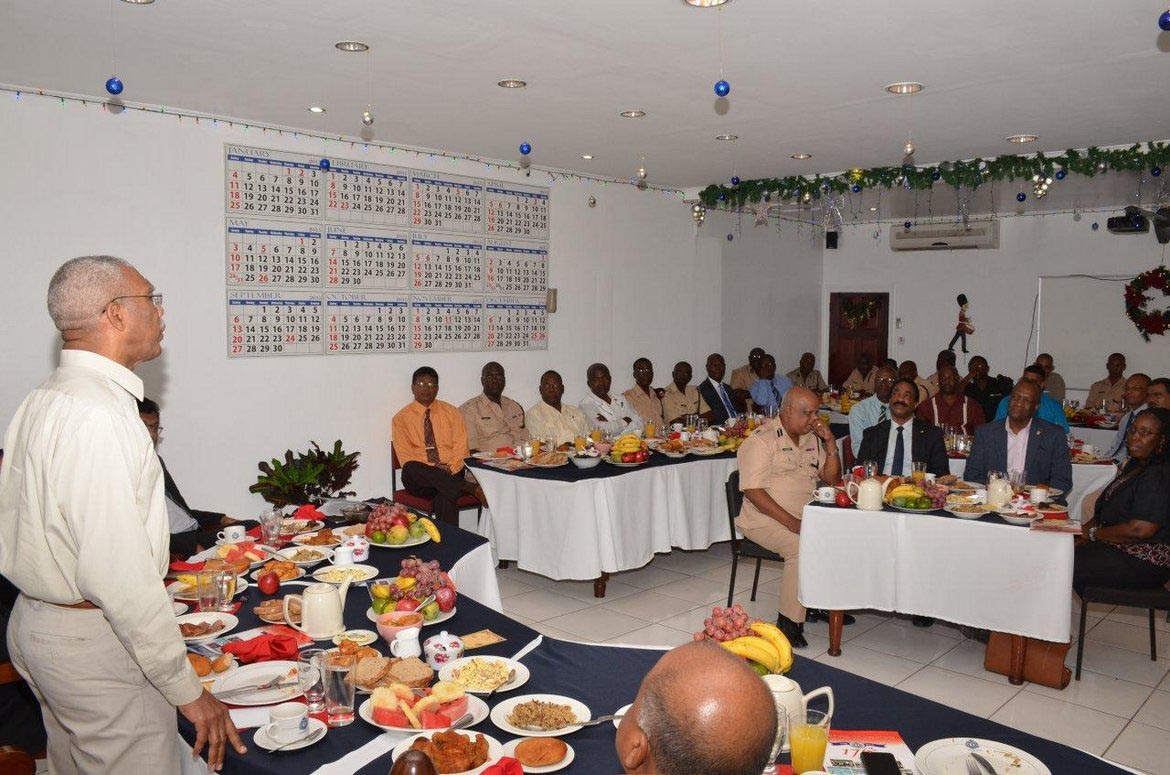 The President, who himself benefited from a GPF scholarship to attend Queen’s College, made these announcements at the GPF’s Traditional Christmas Breakfast at the Headquarters in Eve Leary. The breakfast was hosted by Commissioner of Police, Seelall Persaud and attended by Prime Minister Moses Nagamootoo, Minister of Public Security, Khemraj Ramjattan, Minister of State, Joseph Harmon, Attorney General, Basil Williams, Chief of Staff of the Guyana Defence Force, Brigadier Mark Phillips, members of the National Security Council, Senior Officers, Division and Branch Commanders of the GPF.

President Granger also used the opportunity to declare that while the Force has faced significant challenges, it has ‘turned the corner’ and Government will continue to ensure that adequate resources are provided to ensure the security and safety of Guyana.

“I would like to say, without hesitation, that the police force has faced tremendous challenges but right now on December 15 as we look back I would say that the police force has overcome the most severe challenges and I think that better days still lie ahead. Let us put the past behind”, he said.
The Head of State noted that the formation of the National Security Council has been instrumental in ensuring that Government is heavily involved in supporting and working with the GPF to ensure that the crime situation in the country is arrested.

He said, “The Minister of Public Security is obliged to report to Cabinet every single Tuesday morning on the State of the Police Force and on the success in overcoming the crime problem. That’s how seriously we take it. We haven’t ignored it. We haven’t told the police you are paid to do a job go ahead and do it. We sit down and plan and strategise to make sure that Guyana can become a safe country for all of our citizens.”

President David Granger congratulating the Guyana Police Force (GPF) on overcoming the challenges of 2015 at their Traditional Christmas Breakfast, this morning at Eve Leary. Minister of State, Joseph Harmon and Attorney General, Basil Williams are pictured at centre.

The President also said that the Police Force will be given the resources it needs to enable it to make this country safe and added that Government is working to have the Security Sector Reform Plan, offered by the British Government back on the table. “We have great plans for Guyana but those plans will not bear fruit unless Guyana is a safe place and the Police Force is central to the safety of our citizens and the security of our nation”, the Head of State said.

Commissioner Persaud, in his remarks, said that the new administration has created a lot of hope in the GPF that their resource and welfare issues will be addressed. “I wish to say today that we are very motivated. Our investments in capacity building… particularly this year has been paying dividends. We see the Criminal Investigations Department (CID) and crime intelligence working together and [they] have been adequately addressing a lot of the high profile crimes that we see in our streets”, he said.

The Commissioner added that Operation DRAGNET, which was launched on December 1, is already demonstrating some success.