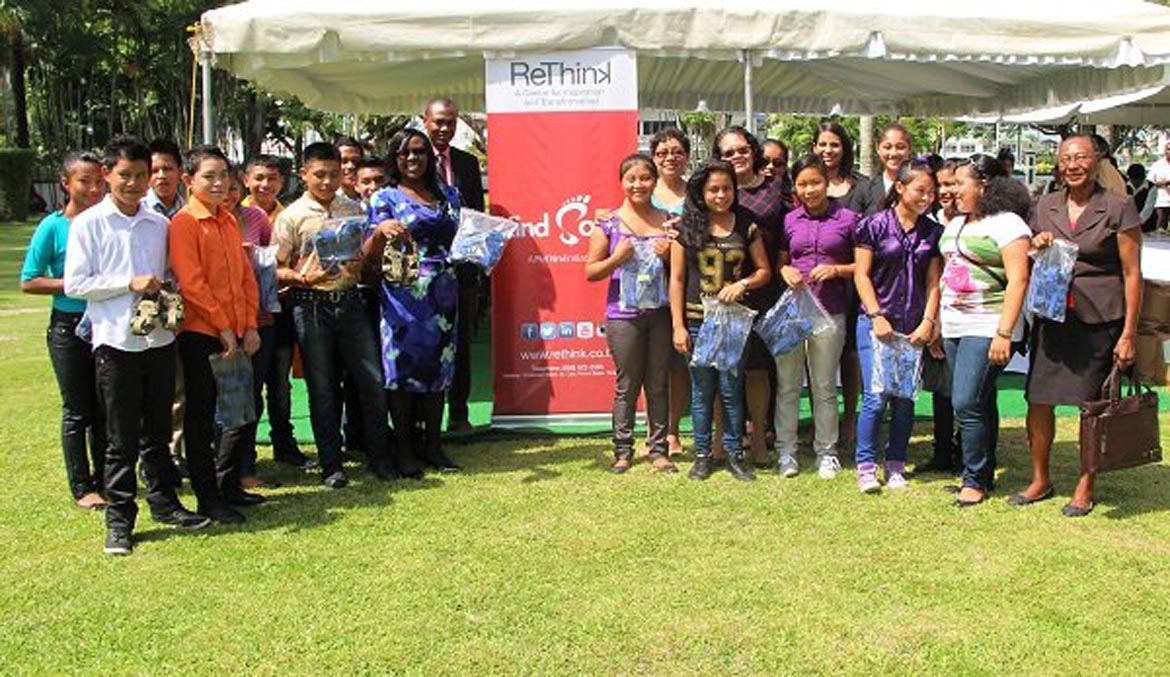 Georgetown, Guyana – (December 15, 2015) First Lady, Mrs. Sandra Granger, in collaboration with the ‘Rethink’ Organisation, the Ministry of Social Cohesion and Caribbean Airlines, today, presented over 1500 pairs of shoes to students from the hinterland regions, who are currently studying in Georgetown.

At a simple ceremony held on the lawns of State House, the First Lady presented the shoes to the students, in the presence of Junior Minister of Health, Dr. Karen Cummings; Junior Minister of Indigenous Peoples’ Affairs, Valerie Garrido-Lowe and Mr. Ernie Ross, Guyana’s Honorary Consul in Trinidad and Tobago.

The shoes were donated under the ‘Rethink Initiative-Kind Soles Project’, started by Mr. Ross, in support of the President’s initiative to ensure that all children, regardless of their location, are able to attend school. This is the first batch of a total of 30,000 shoes, which are expected to be given to all students in the hinterland regions of Guyana over the coming months.

Minister of Social Cohesion, Mrs. Amna Ally, in brief remarks said the President has a passion for education and seeing every child in school and the project is a supplement to his ‘Boats, Buses and Bicycles’ (‘three Bs’) initiative to realise this objective.

“He believes that every child must be in school. He believes that there must be no barrier for our children to have access to education. He believes that not because of poverty our children must not have access to education… During our campaign; we saw a lot of difficulties which are being faced by the children, especially in the hinterland communities. We saw instances where not a single child had on school shoes and it struck the President and the First Lady and so I have no doubt that because those were witnessed at first hand, a project like this one has come into being,” Minister Ally said.

In explaining the genesis of the project, the First Lady said the shoes, called “the shoes that grow” is specially designed to ensure that it can still fit the children as they age since it is expandable.

“I had a discussion with Mr. Ernie Ross, after he had seen a picture of the hinterland children bare feet, and he said he wanted to provide some shoes for them. Well, I had seen a programme on BBC where a charitable organisation working in Africa had recognised the need for shoes for the children that can protect them from cuts and infections and so on, and so they developed this shoe called “Shoes that grow”. [Being] a mother, I know you buy shoes and in six months their sizes change. So we thought this was the best for the children since it can still be worn as they get older and we approached the company,” Mrs Granger said.

In his address, Mr. Ross said that during a meeting with the President he mentioned that he was saddened at the fact that children in the remote areas were going to school bare feet. The Honorary Consul related that it was at this time that he decided that something needed to be done to address the situation.

“This is much the genesis and thinking of the First Lady and the President in meeting the needs of these children. We are merely the conduit to getting the programme put together,” he told the gathering. The Honorary Consul, who was instrumental in procuring the shoes, noted that the Government of Guyana will not be asked to provide any financing for the project.

“Each one of these shoes cost US$15, but we are not burdening the Government of Guyana with this responsibility. We are seeking sponsors to carry the programme forward so we are not going to rest until every child has been given a pair of shoes in every community,” he said.

An arrangement was put in place and the First Lady then worked in tandem with the Minister of Social Cohesion and the Honorary Consul to ensure that the shoes would be delivered here for distribution. Caribbean Airlines agreed to ship the shoes to Guyana at no cost to the stakeholders.

Dion Inniss, Sales Executive of Guyana and Suriname, Caribbean Airlines, in his remarks, commended the project noting that Caribbean Airlines was delighted to partner with the stakeholders in making the initiative a reality. He also committed the Airlines’ cooperation to undertake similar projects in the future.

“We are happy to be a part of this initiative in bringing the footwear over to Guyana free of freight [costs] as part of our social corporate responsibility. We would like to continue to partner with not just [the First Lady’s Office] but other agencies which place emphasis on youths in Guyana,” Inniss said.

The Junior Minister of Indigenous Peoples’ Affairs also expressed gratitude to the organisation and stakeholders for the efforts to ensure that the children in the hinterland regions are not left behind.

“They would really appreciate this. It is such a wonderful gesture and on their behalf, I say thank you very much,” Minister Garrido-Lowe said.