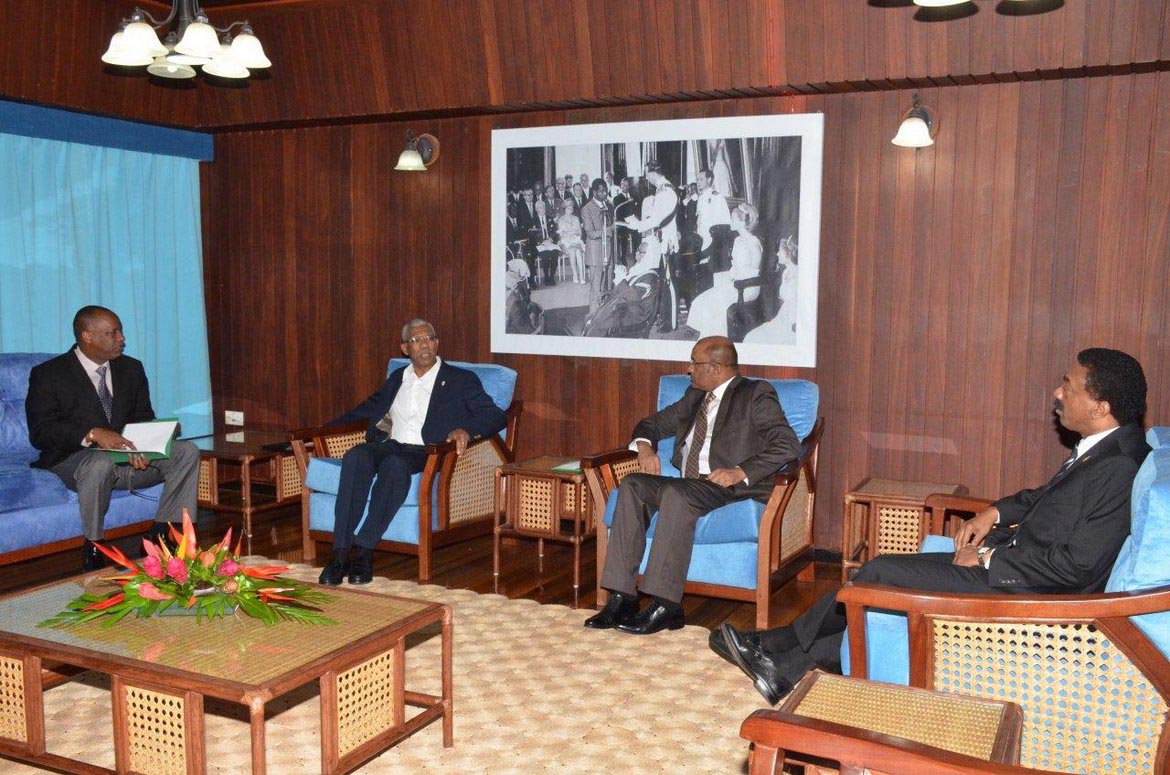 Georgetown, Guyana – (December 9, 2015) President David Granger, as is Constitutionally required, this morning, met with the Leader of the Opposition, Bharrat Jagdeo to consult on the Government’s nominee for the role of acting Chief Justice when, Justice Ian Chang proceeds on pre-retirement leave on December 15.

Government has nominated Justice Yonette Cummings-Edwards for the role and President David Granger described her as the most suitable person to act in the position. “We looked at the judges particularly, the judges in the appeal court and we felt that Justice Yonette Cummings-Edwards was the person that could carry out the duties of Chief Justice. We felt she was the most suitable person. We looked at her experience; the decisions that she has given, her qualifications and we felt she was the most suitable when all these factors were taken into consideration”, he said.

The President added that the consultative process was conducted completely in line with what is required by Guyana’s Constitution.

“The Constitution requires me to consult and having considered the potential candidates, I have made my choice. I am satisfied that she is a good person to fulfil that function and in due course I will have to have other consultations with the Leader of the Opposition to have a permanent appointee but right now Mr. Carl Singh is the substantive Chief Justice, he is acting Chancellor and I do hope that in due course we will be able to have substantive persons in both positions”‘ he said.

In an invited comment following the consultation, Mr. Jagdeo suggested a selection process, which is not constitutionally required for the naming of the Acting Chief Justice as well as another for the appointment of the substantive position.

“The president proposed a name I spoke about a process and I asked that the elements of the process that I suggested are One The most senior judge should act at this point in time and secondly that if its performance base, that we should get a report from the judicial service commission about the performance of the nominees and people or the nominee and compare to others who are a part of the senior leadership of the judiciary”, the Opposition Leader said.

The Head of State added, “We are not looking for a permanent appointee because acting Chancellor of the Judiciary, Mr. Carl Singh is the substantive Chief Justice so I cannot fill a position that is already occupied. So from the outset we knew that the nominee would be the Acting Chief Justice… Nothing that was done today was at variance with the Constitution.”

Mr. Jagdeo also added that he had not had an opportunity to review the curriculum vitae of the nominee prior to the meeting and Attorney General Basil Williams, who was present at the meeting, indicated that he expressed no fundamental objections to Justice Cummings-Edwards.

Minister Williams was also in high praise of the Government’s nominee. He said, “We believe she’s the best person for the role. She’s highly qualified, very experienced, in terms of being on the bench, she’s been in the Court of Appeal for many years [and] a lot of her own decisions have been upheld by the Caribbean Court of Justice. So there’s no question about her competence and her qualifications and her dedication to that office.

From right- Minister of State, Joseph Harmon, His Excellency, President of Guyana, Brigadier David Granger, Opposition Leader, Bharrat Jagdeo, and Attorney General and Minister of Legal Affairs, Basil Williams sit down for talks for the appointment of the Acting Chief Justice at the Ministry of the Presidency.