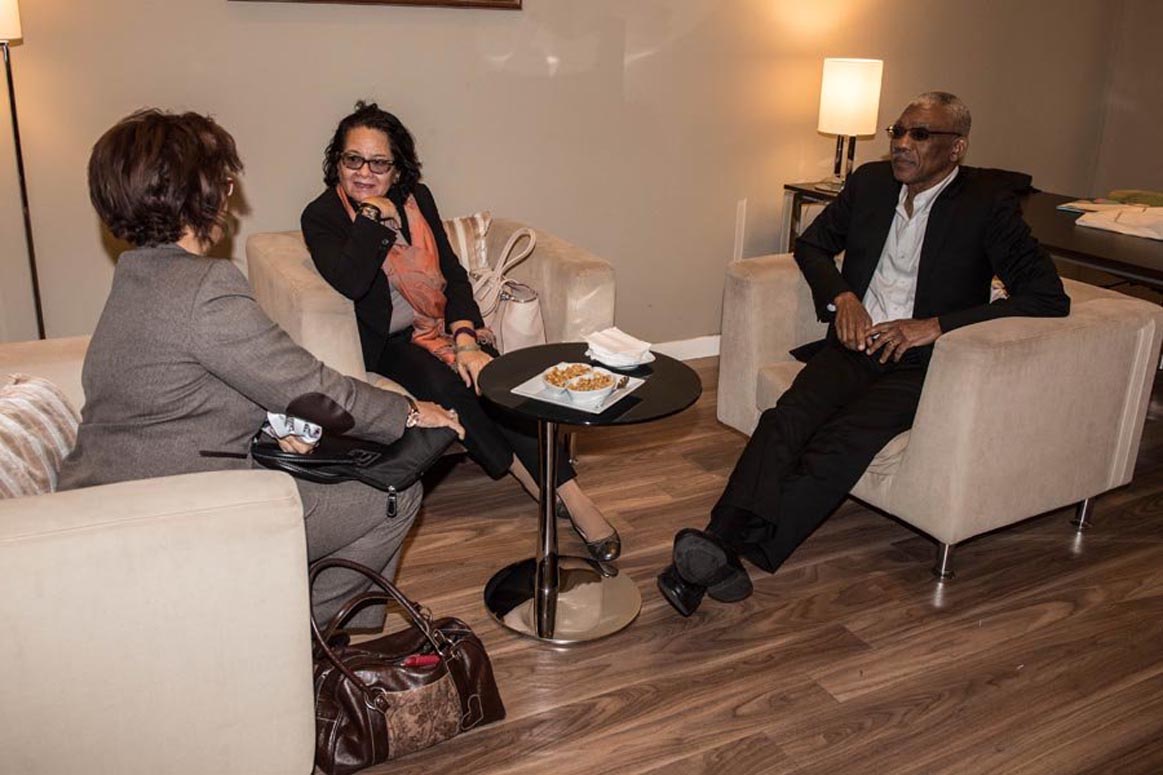 The Head of State is set to once again place at the top of the agenda areas that are critical to the development of small States like Guyana, such as border security and climate change. Minister Greenidge, who spoke with the Ministry of the Presidency tonight, indicated that in his contribution to a session on the vulnerability of small States to shocks, he mentioned specifically, that countries like Guyana and those island States of the Caribbean are especially susceptible to Economic shock, including trade shocks, Environmental shocks, including climate change and the degeneration of marine and ocean systems and resources of the blue ocean economy.

The Minister said, “We have to recognise that building resilience is a function, not only of domestic policies, but also of regional and international policies. So the leadership of the Secretariat on the analytical front and its efforts in the Geneva office and on the technical assistance front are worthy of mention in this context.”

These discussions come even as the Commonwealth countries are finalising their common position on climate change, ahead of the United Nations’ Climate Change Conference (COP 21), which will be held in Paris from November 30 – December 11, 2015.

While the question of legal parametres still needs to be worked on, Minister Greenidge said that the Commonwealth countries have more or less agreed on a position that is acceptable to Guyana. “By and large it is a good report in terms of setting targets, recognising the impacts of climate change; the adverse impact of climate change in many of our countries [and] the need to set targets that are consistent with goals set in the region”, the Minister said.

Importantly for Guyana is the expected ratification of the position drafted on the Venezuela border claims to Guyana’s territory in the coming days, which recommends strong support for Guyana to the Commonwealth Heads. The recommendations in the drafted Declaration speak to the need to honour Treaty obligations and respect International Law.

Another issue, which gained prominence on the Foreign Minister’s agenda, according to Minister Greenidge, is the issue of migration. The Ministers discussed the possible arrangements for facilitating movement of skills between Commonwealth countries. While the Ministers worked to explore common ground and possible approaches in this area, the Commonwealth Secretariat will have to play a role in facilitating and putting together material for policy positions. However, extensive attention was paid to the challenges that come with migration globally, particularly the risk of international terrorism.

Even as Guyana makes moves to strengthen its immigration policies, the Minister said, “Traditionally migration in our case has not been associated with movement of extremists, but what I think is recognised today is that you have to look at all the migration mechanisms because people interested in perpetrating extreme views may see migration as a means of facilitating these views.”

Domestic violence featured prominently on the agenda as the Ministers shared experiences and best practice approaches to tackling this scourge. The Minister noted that while some countries have passed significant legislation, this may not be enough as there is a need for a change in attitude and culture and better enforcement. Discussions like this are intended to ensure that the Commonwealth Secretariat can provide carefully targeted technical support to strengthen judicial systems and other critical areas, where it has the capacity to do so.

President Granger, over the next two days will attend the CHOGM 2015 Executive session, where he will participate in interactive meetings and will place the security of small states and the threats to Guyana’s borders at the top of the agenda. Additionally, tomorrow, the President will attend the official opening of CHOGM 2015 at the Mediterranean Convention Centre. He will also attend a Reception on the invitation of Her Majesty, Queen Elizabeth II and the Prince of Wales, Prince Charles. Later in the evening, Her Majesty and the Duke of Edinburgh will host a Reception and Dinner for Heads of States, attending CHOGM 2015.

On Saturday, President Granger will attend a special Heads of Government Retreat aimed at facilitating dialogue between the leaders. Additionally, the President is expected to participate in a number of bilateral meetings in the margins of the conference. Minister Greenidge has already met with the Foreign Minister of the United Kingdom and the Maldives.