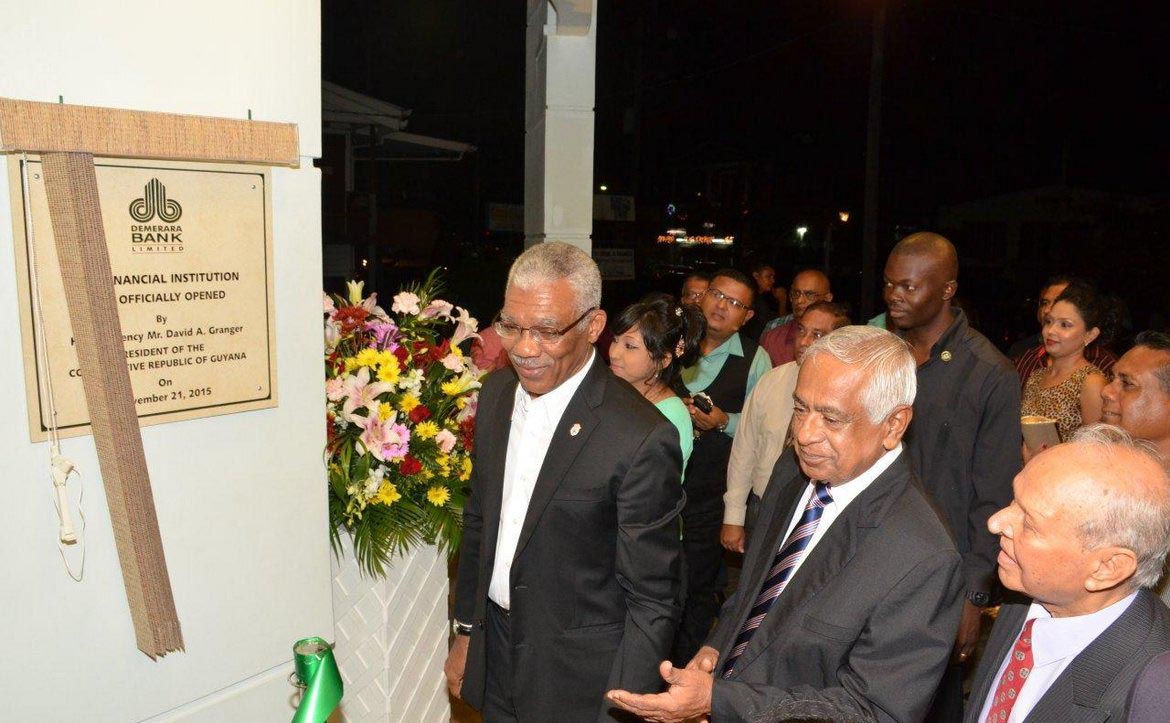 Georgetown, Guyana – (November 21, 2015) “We accept the view that increasing the reach of our commercial banks is best achieved under a banking system that is built on four pillars, stability, security, integrity and flexibility.” These were the sentiments expressed by President David Granger as he addressed a gathering at the opening of the seventh branch of Demerara Bank Limited, this afternoon on Camp Street.

The $800M facility, which is located at Lot 214 Camp Street, will now be the Bank’s new head office and Corporate Banking Branch. President Granger, in his remarks, said his government is prepared to partner with all financial institutions to implement appropriate policy measures, to promote greater financial inclusion. In outlining his administration’s vision for the local banking sector, the President first acknowledged the fact that Guyana’s financial system was not spared the implosions of face by financial institutions in other parts of the region. Specific reference was made to Globe Trust Investment Company and CLICO. These instances, the President said, clearly signaled the need for continued vigilance in the way local banking systems are regulated and managed.

“Our government proposes the strengthening of the regulatory and supervisory capacity of the Bank of Guyana. The collapse underscored the need to safeguard deposits and investments in the eventuality of institutional failure. Our Government proposes to discuss with bankers the implementation of a Deposit Insurance Scheme to ensure that individuals who hold deposits at failed financial institutions would be compensated up to an agreed amount, within a specified timeline,” the President said.

On the issue of integrity, President Granger pointed out that there is the need for commercial banks to zealously guard against illicit funds finding their way into the financial system. “Money-laundering is associated with distortionary effects on an economy. Illicit funds can undermine the integrity of the country’s financial system, thereby exposing the country to sanctions,” he asserted.

“One of the first acts of our government was to pass the Anti-Money Laundering and Countering the Financing of Terrorism Act. Our Government remains committed to doing everything necessary to remain compliant with the requirements of the Financial Action Task Force (FATF). He, however, pointed out the need for banks and other regulatory bodies to be vigilant in order to prevent the contamination of Guyana’s financial system with ‘dirty’ money.

Equally important for the financial sector, the President said, is for banks and depositors to be safe from crime and fraud. “Cash transactions are still too prevalent. Persons are still moving around with large amounts of cash, thus exposing themselves to robbery,” President Granger said. He added that banking institutions can help to reduce the high incidence of cash transactions in the economy by developing appropriate instruments for the benefit of the populace and by encouraging their clients to make use of these instruments.

On the administration’s role, the President said Police Force is being reformed as help has been sought in the form of the re-introduction of the United Kingdom-funded Security Sector Reform Action Plan. “Our Government is determined to make Guyana a safe place to do business and a safe destination for foreign direct investment,” he said.

Further, the President indicated the need for flexibility within the sector, as Guyana is an agriculture-based economy. “Our agricultural and manufacturing sectors need investment to become more diversified and competitive. Our Government is considering the establishment of a development bank in order to boost the development of these sectors,” he said. He cautioned that commercial banks must also shed their overly cautious approach to investment in agriculture, infrastructure and manufacturing enterprises and projects. “Our plan includes creating a green economy by the generation of electricity from renewable sources. It includes reducing poverty through investment in increasing farm production and agro-processing,” he added.

With regard to infrastructural development, Government will focus on expanding infrastructure with the establishment of aerodromes, bridges, highways and stellings as investment in this sector will allow the commercial banks to diversify their portfolio and to reduce portfolio volatility. As the President congratulated the Board of Directors on this venture, he hailed it as a “step in the right direction”. This move he said sends a strong message to investors. “It is an expression of confidence in the economic prospects of Guyana. These are the signs to which local and foreign investors pay attention when making investment decisions. If the commercial banking sector is buoyant, as your profits seem to suggest, investors will read that as a vote of confidence in the future,” President Granger said.

Meanwhile, Minister of Finance Winston Jordan, who was also present at the event, also commended the bank for its efforts in adopting a modern approach to energy conservation through the employ of energy efficient devices. Minister Jordan noted that the approach taken by the bank as it relates to the building techniques used will translate into reduced electricity bills and a smaller carbon footprint.

The Minister also underscored the need for financial inclusion, which he said must include all sections of society and more importantly hinterland areas. “The large dependence of the poor on non-traditional sources of access to credit cannot be overcome without improved access of the poor to financial intermediation,” the Minister pointed out.

Further, Chairman of the Bank, Dr. Yesu Persaud underscored the need for the use of technology for the development of the economy. “I still believe that we have people in Guyana who can really transform this place with the help of some of the larger western countries… and I see the day when we will have the help and the technology that we need,” he said. Reminding those gathered that Guyana is a place rich with natural resources, Dr. Persaud said more citizens need to venture into initiatives that will aid in community building. He added that Demerara Bank, being Guyana’s only indigenous bank, is committed to playing its part in building the local economy.

On November 12, 1994, Dr. Yesu Persaud established Demerara Bank Limited, but the idea had been conceived since in the late sixties. Though it was incorporated on January 20, 1992, it was granted its license to operate in March 1994. Construction of the Bank commenced that very month and on November 12, 1994 it was declared open by the late President of Guyana, Dr. Cheddi B. Jagan. The establishment of Demerara Bank was seen as the beginning of another chapter in Guyanese history, since it was the first private sector indigenous bank.

President David Granger, Chairman, Dr. Yesu Persaud, Board member, Mr. Hemraj Kissoon as they unveiled the plaque at the commissioning of the 7th Demerara Bank branch.