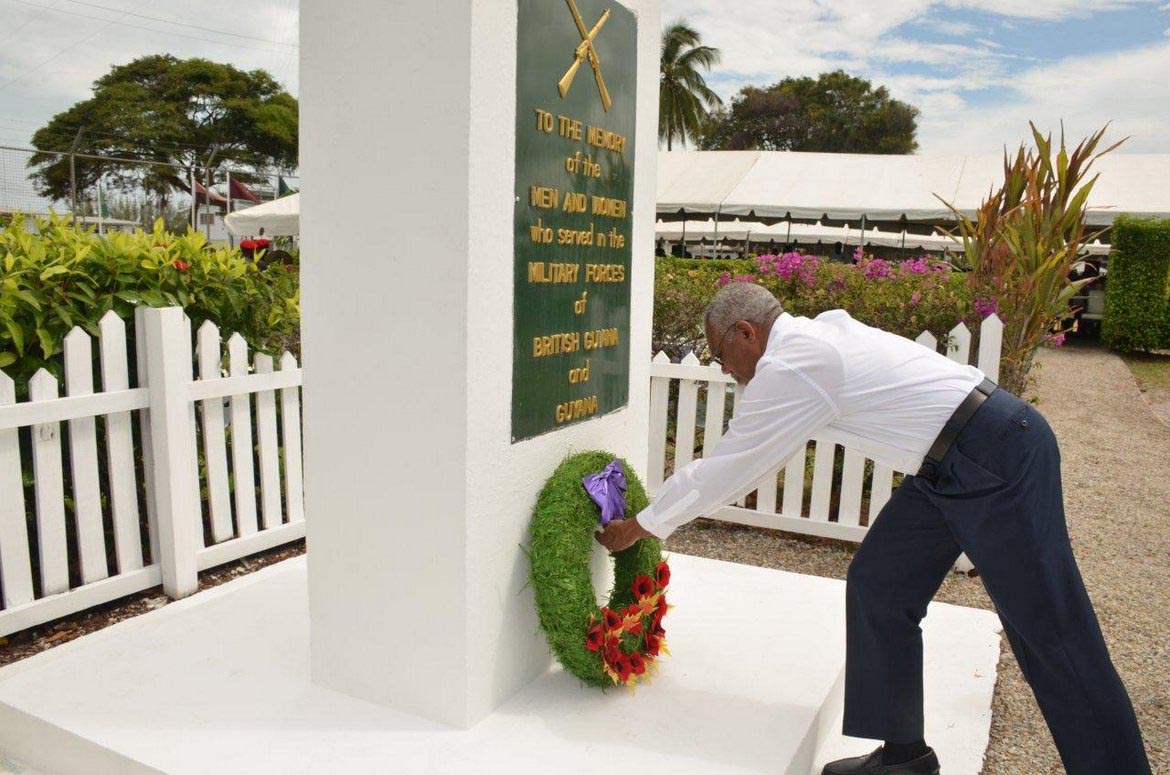 Georgetown, Guyana – (November 20, 2015) The Guyana Veterans Legion, today, received another sizable donation, on the celebration of Veterans Day, as Chief of Staff of the Guyana Defence Force (GDF) Mark Phillips handed over a cheque for $1M to the association. This was done on the occasion of the Veterans Day Wreath Laying Ceremony, held at the Veterans’ Monument on the Front Lawns, Base Camp Ayanganna.

President David Granger, himself a retired Brigadier from the Defence Force and now Commander in Chief received the Presidential Salute, which was followed by the last post and then one minute of silence for Guyana’s fallen heroes. Wreaths were then laid by President Granger, Chief of Staff Mark Phillips, Lt. Colonel (Ret’d) George Gomes, Lt. Colonel (Ret’d) Hartely Liverpool and Ms. Cheryl Tappin, President of the Ex GDF Association of New York. Solemn words of prayers were also offered by the Hindu Priest, a Muslim priest and the Force Chaplin.

President Granger makes his way to the Veterans’ Monument to lay a wreath as he paid tribute to the fallen heroes.

Before handing over the monetary donation to President of the Guyana Veterans’ Legion, Retired Colonel George Gomes, Brigadier Phillips, in his remarks, said the army was more than pleased to acknowledge the efforts of the fallen heroes and those still alive. “This is indeed an acknowledgement of your collective service in the defence of Guyana, in support of diplomacy to safeguard our national interest and your contribution to the development and the protection of democracy in Guyana,” Brigadier Phillips said. He added that the army is heartened by the President’s recent decision to establish the national Veterans Commission, as it will support the conduct of investigations and the making of recommendations for the improvement of the living standards for the deserving veterans.

On the occasion, President of the Guyana Veterans’ Legion, Retired Colonel George Gomes lauded the efforts of the administration for the efforts being made to take care of the well-being of veterans. “When a young person enlists in the GDF it is the highest level of service he or she can give to a country. They are prepared to lay down their life for the country and to make the ultimate sacrifice if that is required,” Gomes said. 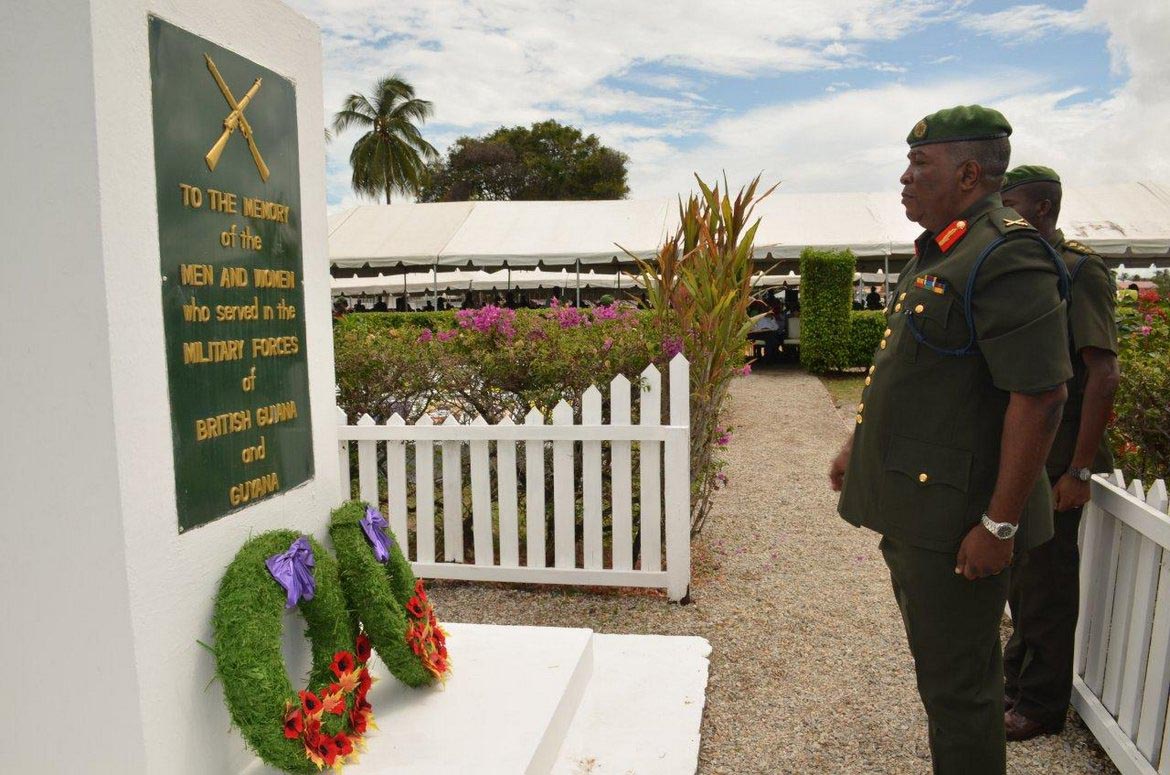 Chief of Staff of the Guyana Defence Force Mark Phillips as he laid a wreath at the Veterans’ Monument, during the Veterans’ Day ceremony.

He added that it is with great gratitude acceptance that the Veterans have already begun to “observe the winds of change blowing favourably” in their direction. “I’m extremely proud of the high level of service being given to our nation by veterans, from the very top; here I’m speaking about our President, and Minister of State and many others…” Gomes told the large gathering.

Gomes also used the opportunity to call for the GDF to address the diet of soldiers based on health issue trends among veterans, which may be related to their food intake. The Veterans’ Association currently has a “shut in list” of veterans totaling 85. Of this group, 36 are diabetic, 19 are visually impaired, eight are amputees. Twenty seven members have been stricken with stoke.

With this situation facing the association, Gomes also made a plea for a medical team to be made available, once a week for those in need of medical care.

Further as he congratulated the GDF on the occasion of their 50th anniversary, Gomes said the theme “Commemorating the past, celebrating the present, and Carving the future” is a very timely one. “We veterans feel involved as you commemorate the past. We are here today to celebrate the present and we will volunteer to play our part in carving your future. We can pass on valuable experience and tradition on to serving soldiers. I urge you Chief of Staff to make use of us while you still have we are prepared to contribute to the further development of the GDF,” Gomes said.

In addition, President of the Ex GDF Association, Ms. Cheryl Tappin, in brief remarks, thanked the new administration as she called on those who have the means to emulate and replicate the recent gestures made by the government in their support to veterans. Further, what made today’s event even more nostalgic for the veterans was to see eight of their colleagues being bestowed with the title “the first soldiers” and being honored with caps bearing that title. One of these distinguished gentlemen, Lt. Colonel Hartely Liverpool who was among those honored and is the tenth rank in the Army, said his years in the force are what he considers the best years of his life.